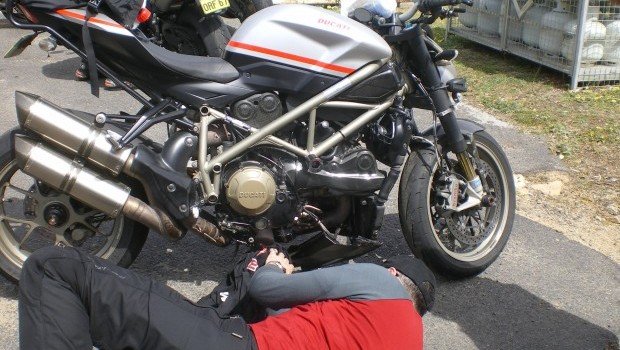 Through Neville, stop at Mandurama. Fantastic, Borrie tells me. He’s ridden all around the area, but never been on that road. “How do you find these roads, Al?”

I tell him we haven’t got to fantastic yet.

There’s 20km of Mid Western Highway at cruising speed – eight, nine minutes. There’s the Reg Hailstone Way from Woodstock to the servo at Wyangala Dam. Borrie enthuses. “What a road! Winding, unsignposted, fast, rough, scenic, cliffs at the sides: it’s got everything!”

I tell him we haven’t got to fantastic yet.

There is a long wait at the servo. Some car rally drivers have arrived before us and are queued for gas, and Bly has found that his Ducati is leaking oil onto the rear tyre. He borrows a shifting spanner from an obliging camper and fixes it. We stand around and make Ducati jokes. Surprisingly, Bly has heard them before.

Frogmore, Rugby, Crookwell. 125km of high speed sweepers, lush scenery, grazing sheep. Not another vehicle on the road, except the farmer with two dogs on his quad just over the crest of one hill. Boris and Daz and Bly pass and play ahead of me. I decide to go a bit slower so the new guy and the new chick don’t fall behind. It is unnecessary. They are a hard riding pair. I kick the VFR back a gear, sing Peter Green in my helmet. “Gotta keep moving, gotta keep moving. Hellhound on my trail, hellhound on my trail.”

The pub has scotch fillet, and James Boag Premium. That was the fantastic bit, I tell Boris. He is in the grip of some strong emotion. He agrees. He buys beer for everyone.

Five or ten km of dirt on the way to Taralga. The noobs don’t fall off. We blast through the hills to Oberon, and take a break near a pine forest. Boris tells us of the weekend after the first rains, when the Russians come camping here. They pick the mushrooms in the pine forest, and drink too much vodka around their campfires, and sing sad songs in deep voices.

Oberon, Mount Victoria, Bell. The Bells Line of Road is a commute – I ride it fortnightly. I’m home after 11.75 hours. There’s an additional 790km on the clock. About 150 of them were straight roads.

There are worse ways to spend a Sunday.