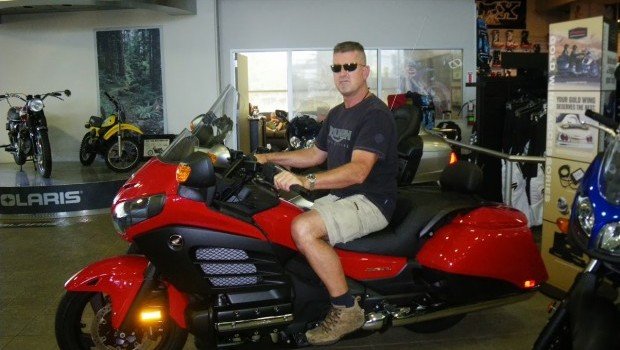 Bly is revelling in the Way of the Motorcycle lately. Sober readers will recall that he was precluded from riding same for some six months when the Organs of the State confiscated his rider’s licence, his exuberance having come to the attention of the Snowy Mountains Highway Patrol.

I asked him if he wanted to join me on my bi-monthly trip to Lithgow.

Of course, he did. He arrived at my place, I shook his hand, which was pretty well the limit of social intercourse for the day, and we rode to Lithgow on a double demerits weekend, avoiding the copper skulking along the M2 and the other copper lidaring outside that café on the Chifley Road between Bell and Lithgow.

It rained a little. We made good time nonetheless. I reflected on the tyres of my youth. The Avon Roadrunner was regarded as hot shit, but I would never have used them like I did the Bridgestone BT023s today.

Bly ate a hamburger in Lithgow, and I visited the aged relative. Bly mercifully refrained from photographing his lunch for your edification and elucidation, although he has the technology to do so.

And then we rode home. The turns at the top of the hill coming out of Lithgow are paved with smooth river stone instead of the usual blue metal, and my front tyre let go for an instant while I was having a pretend dice with Bly. Joel, who makes roads for a living, tells me that these are treacherous surfaces, as the smooth stones not only don’t stick to the tyre that well, but they don’t stick to the underlying bitumen that well, and are easily dislodged. He refers to a something coefficient of friction, but when I ask him to compare the coefficient with that of blue metal and give me the numbers, he is always on about his eighty-fifth beer, at which time I seem to get an attack of slurred hearing.

Bly left me at Richmond. I proceeded to Borrie’s place to drop something off, and Borrie told me that I needed some of his paella.

His paella is very good. It comes with Chivas Regal Royal Salute and Wild Turkey and a nice Taylors shiraz, after which it is necessary to adjourn to his garage and contemplate the Honda F6B sheltering therein. While the F6B is a motorcycle which I totally get and approve of, it is thirsty work, so more of that Taylors shiraz is required, followed by coffee, which takes the curse off it.

Now, I find that I am home. How did that happen? Win!