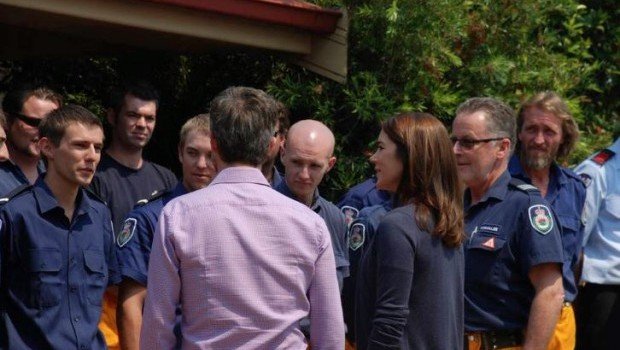 The Bells Line of Road was blocked again due to bushfires that weekend, so to cross the Blue Mountains I went through Yarramundi and up the heights to Springwood.

There was smoke in the air.

There was black stuff at the side of the road, but I didn’t pay it too much attention. The hairpins were good fun on the KLR. There were a lot of Rural Fire Service vehicles parked by the road at Winmalee.

I took the highway in to Lithgow, and Visited the Sick. I went back the same way.

Just out of Lithgow, there is a sign that says “Forty Bends Road”. This sounded like fun, so I took the turn. The surface was really bad, and nine bends later I was back on the highway. I felt cheated.

There was a Vincent Black Shadow parked at Blackheath. You don’t see one of them every day.

I rode with a guy on an old BMW K100 for a while. He had a tent and sleeping bag strapped to the pillion seat.

I went back down the pass at Springwood. There was a police car parked outside the Springwood Country Club, and police tape over the gates. A helicopter was hovering over one of the club dams, with a pipe dipped in the water while it pumped some on board. It was windy, and the helicopter moved around a lot. I reckoned the pilot would be real busy.

I continued through Winmalee. This time I paid a bit more attention. The trees were all burnt. There was a charred picket fence outside a house. There was a trailer parked outside a house, with the tyres burned off its rims. The car next to it was burned out. The house behind it was, too.

The chopper passed me, flying northeast. I passed the truck in front of me at Hawkesbury Lookout, and had a clear run through the hairpins to Yarramundi.

I arrived home around 1800. I lubed the chain and went inside. The ABC News was on the TV. Princess Mary of Denmark was at Winmalee, shaking hands with Rural Fire Service personnel and people who had lost their houses in the bushfires. Prince Frederik was beside her, mercifully silent.

The cameras cut to the handshakees. They thought it was great, and told the camera that their morale was lifted. A local man said he had taken his two young daughters out to see Princess Mary, who he said was setting an excellent example.

Princess Mary’s achievements to date include growing up in Tasmania, an island some 1300km south of the bushfires, meeting the crown prince of Denmark, marrying him,  changing her religion to his and giving him four children, who will also live lives of luxury funded by the Danish taxpayer.

Is marrying a rich man and having a lot of babies setting an excellent example to your daughters up there in the mountains? Apparently so.

I know so little of what makes these people tick. The last time the people of the Blue Mountains made the news in a big way was back in ’97, when they succeeded in stopping McDonalds from opening a restaurant in their area.

They must have found out that McDonalds employ women.