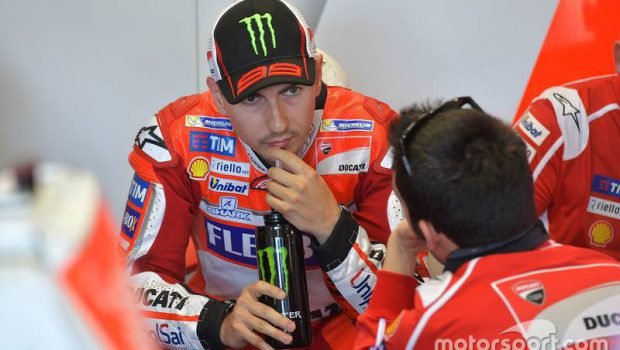 I was a little emotional. It’s what happens when the Spartan chooses to return without his shield rather than lying on it.

The Germans hate the bastard French so they believed that.

But do you remember how we spoke about you talking to the media at the start of this season?

Remember how I said that you’re not to blame Ducati, specifically the bike that Casey can ride faster than everybody, if you’re not on your game?

Why did you say the engine was “nervous”? What the fuck does that even mean?

Look, fair play dropping Michelin in it saying they supplied you with a “dangerous” tyre because everyone will believe that. Everyone knows what the French are capable of.

But don’t say the engine is fucking “nervous”, OK?

And this: “and I cannot brake in the way I would like to either.”

What is that? Do you need to brake with your face now? Do you want us to fit a forehead paddle you can push with your head?

Maybe if we create a mouth-activated rubber bulb? Would that help?

Two levers, George. Two. One for your right foot and one for your right hand. Just like everybody else except sometimes when Dovi likes to pretend he’s Mick Doohan and whines about a thumb brake. We never hook it up, but he doesn’t know the difference.

Oh, and I’ve sent some beanbags to your cabin. I think they will last longer than chairs.