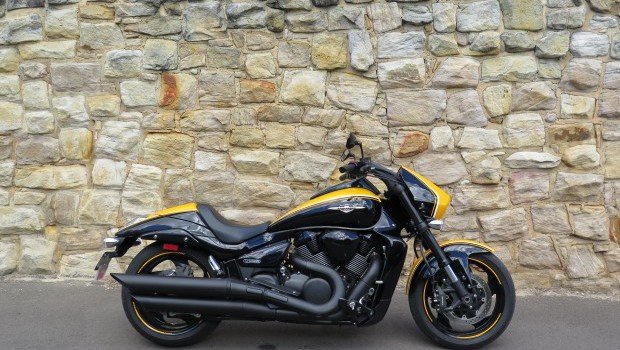 For reasons I don’t quite understand, the world seems to have forgotten about the ruthlessly incredible Suzuki Boulevard.

How that is even possible, given the bike’s huge cult following and just how much man-joy your internal organs squirt out when you twist that throttle is a mystery to me.

So lest we forget, huh? 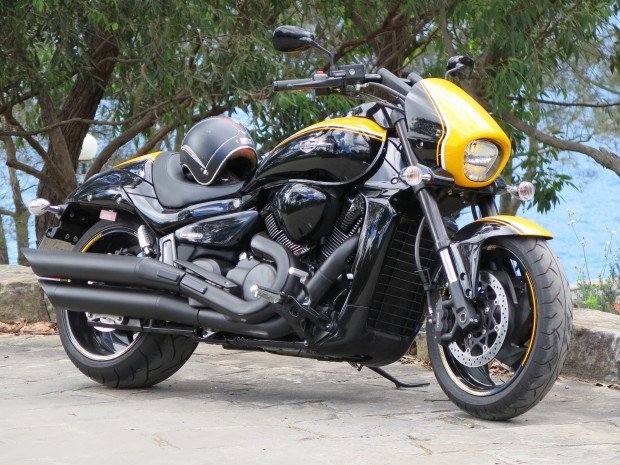 At idle, as you sit there at the traffic lights with your legs spread wider than a Hen’s Night harridan, it sounds like you’re sitting astride a steam train.

A brutal, hell-mean, steam-powered locomotive that’s been dragged out of some lunatic’s laudanum-fevers and compressed into 1800cc of V-twin Japanese power cruiser.

The M109R’s idle is one of the most unique sounds in the entire motorcycling universe. 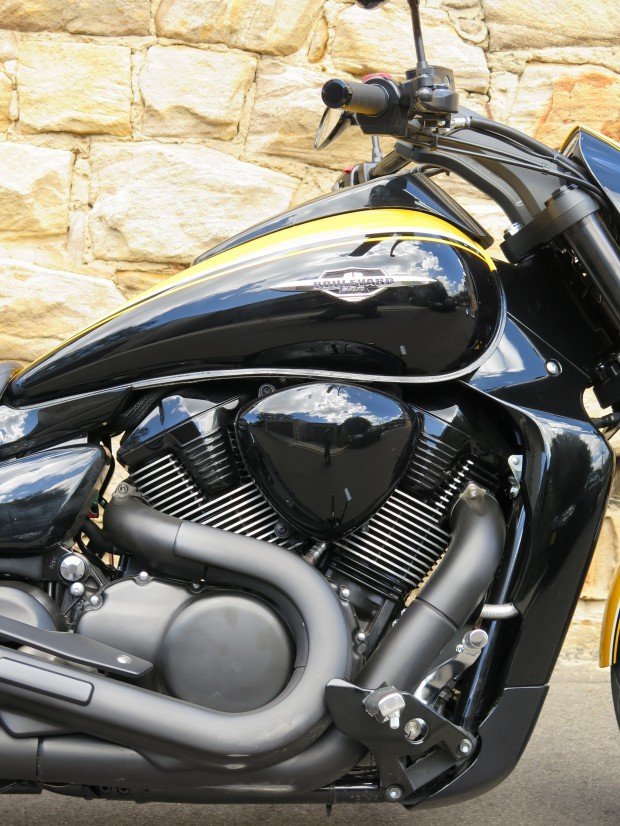 This is what the Big Bang Theory looks like. 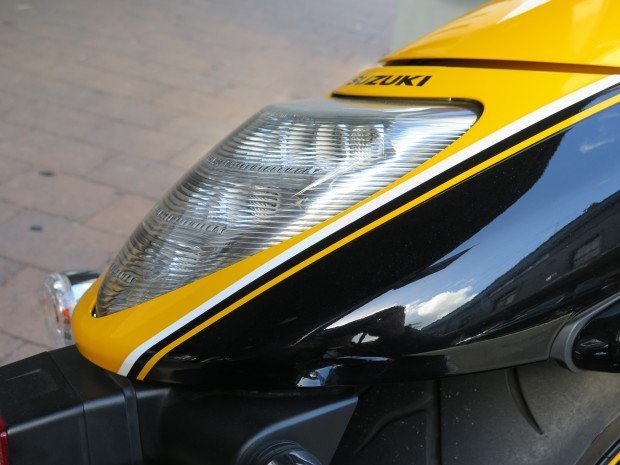 All LED, all the time. 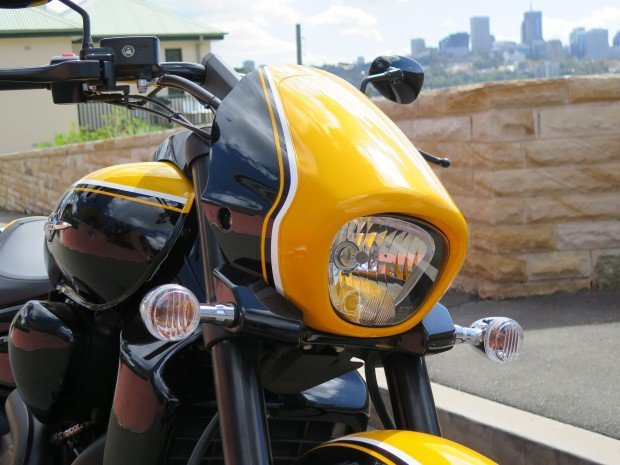 A huge stylistic improvement over the original chrome yukkiness that beset the first model’s bikini fairing. 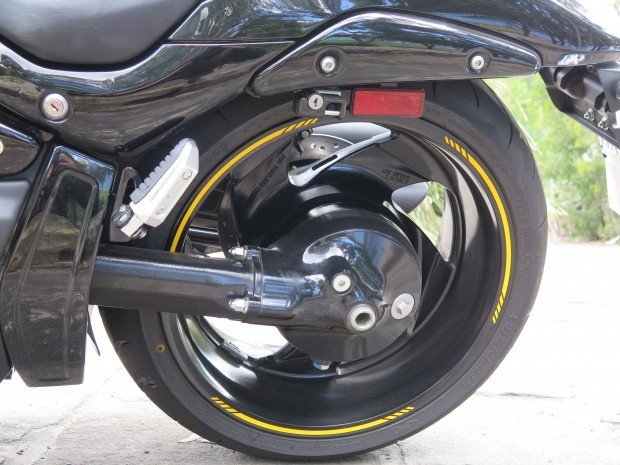 Shaft-drive is a great idea for cruisers of this ilk. Rims look great with the yellow accent, too. 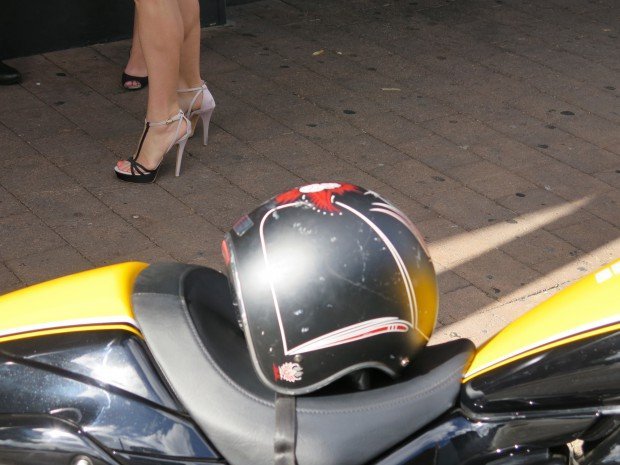 Pillions? They can get a cab.

Which is rather fitting, since the M109R is one of the most unique motorcycles in that same universe.

On throttle and off idle, the rich, power-laden choof-choof-choof pulsing disappears and if you’re doing it right, you start to feel a bit like a water-skier thats being hauled along by a jet boat as the amazing motor sets about is business.

Now just so we’re all clear by what I mean by the term “cruiser”. A cruiser is any bike where your feet are pointing forward when you ride it.

The Boulevard long ago redefined the cruiser genre, forcing the addition of “power” to compound the noun, and it pretty much reigns alone in that kingdom.

The only other real contender in this class is Harley’s equally unique hot-rod, the Porsche-designed VROD, but it this game size matters and the Boulevard’s got 300cc’s more in each pot than the 1250cc VROD. 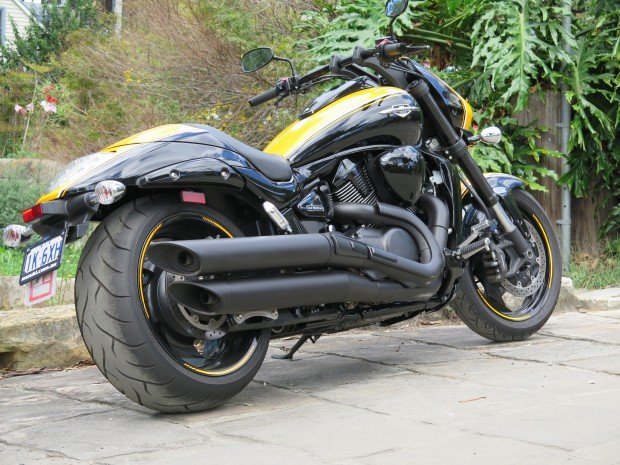 There’s some decent clearance on the big girl. 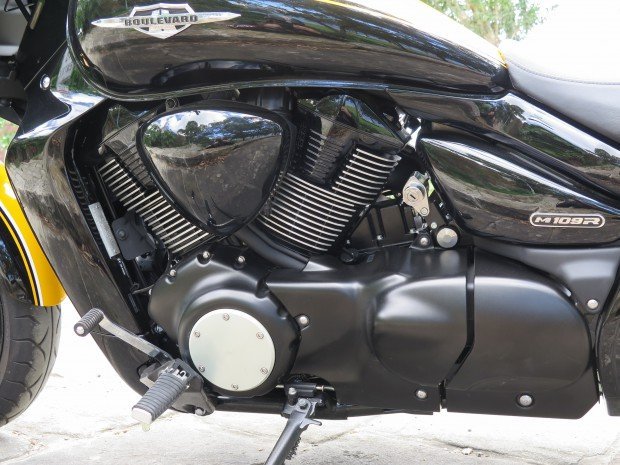 This is its sinister side. SWIDT? 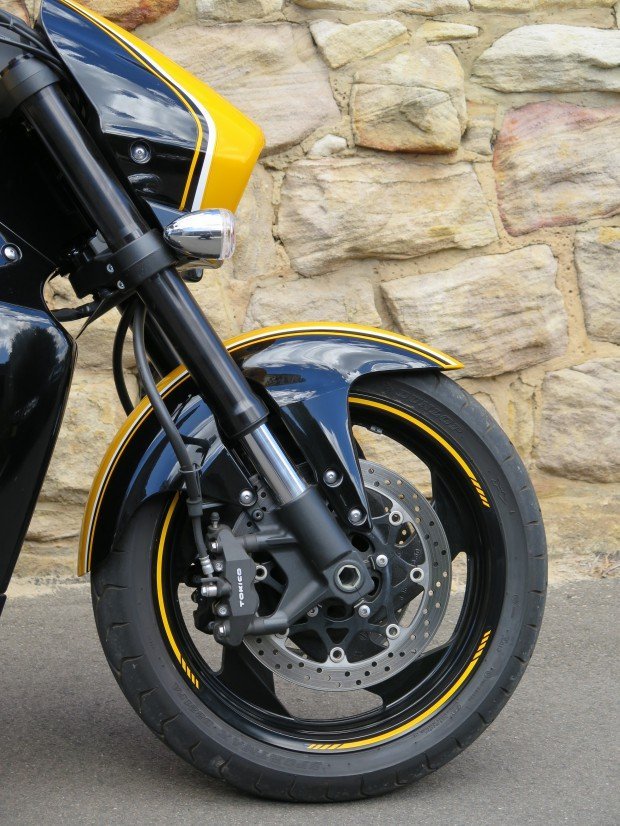 Works best in conjuction with the back brakes.

Triumph’s 2300cc Rocket 3 surrendered its cruiser credentials when it moved its pegs back, and Yamaha’s mighty XV1900 Roadliner is a far more traditional-looking and riding jigger (despite its marvellous motor) so the Boulevarde rules alone.

And rule it does.

Former Australian Superbike champion Shawn Giles has one. And there are apocryphal tales told by horrified journos of his prowess upon it.

I have personally fanged the pulsing buggery out of various Boulevards in recent years, and while I am not the steam-particles off the man-wee emitted by Shawn, I have nonetheless found great joy and pleasure in the ridiculous velocities the M109R offers.

Sure, it can be a bit of wrestling match when you combine hard corner entries with almost two-metres of wheelbase and a rake of 31 degrees.

But I am a man and men will cope. 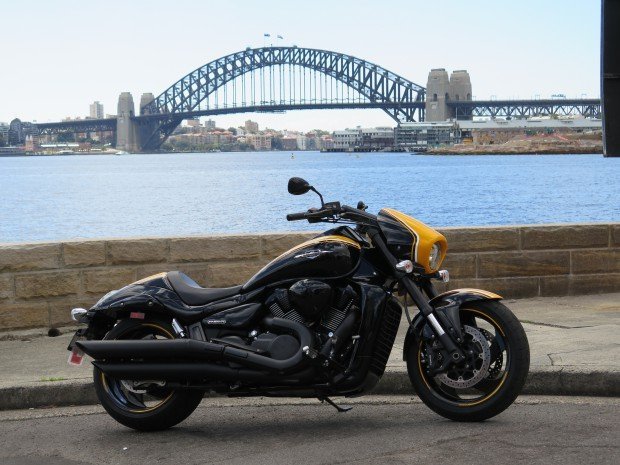 See? Here is how one copes on a gorgeous Sydney day. 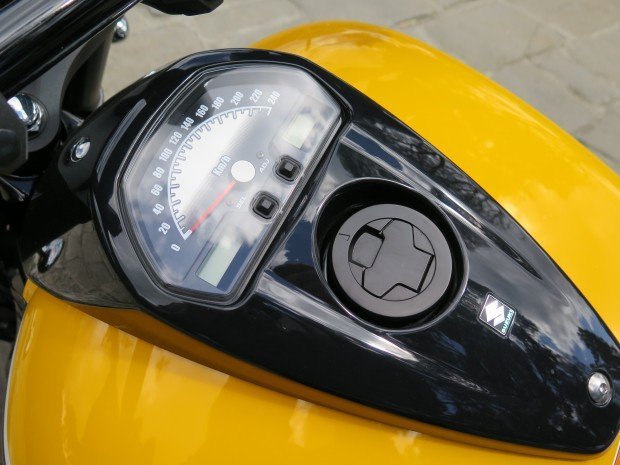 When that red thing is all the way over to the right is when you are a man. 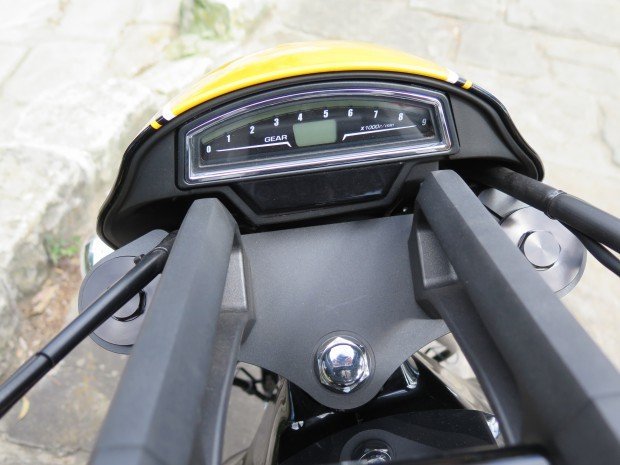 Tacho and gear indicator. Kinda superfluous, but there ya go. 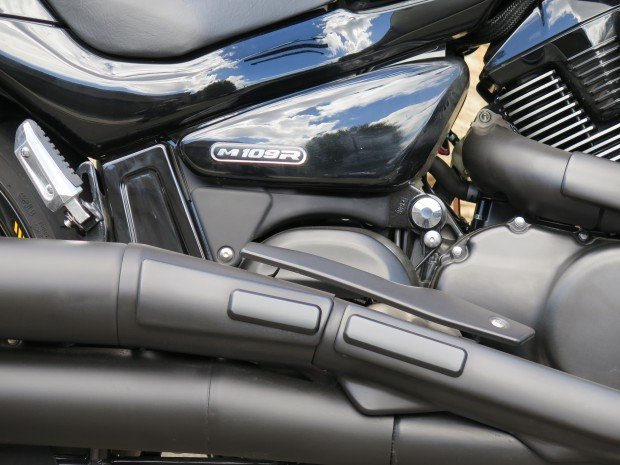 Tidiest heat-shields in the business. You’ll be grateful for them and they work.

For there is great reward in the coping – and all of it comes from an engine carved from the phallus of the Torque God.

Let’s get technical for a minute, just so you don’t think this kinda grunt is some type of crazy sorcery – which is what pops into your head when you first get up it.

The 54-degree, liquid cooled, four-plug engine boasts massive 112mm aluminium-alloy forged pistons – the biggest such creatures in any production car or bike. The cylinder bores are lined with Suzuki’s race-bred and proven SCEM (Suzuki Composite Electrochemical Material) allowing for superb heat-transfer and super-tight clearances. The explosions inside are all pumped through 56mm throttle bodies and managed by one of the best fuel-injection systems there is, exiting via a two-into-one stainless exhaust system, which is also managed by electronic exhaust tuning.

The sump is dry, which drops the crankshaft and the centre of gravity and helps a lot when you’re wishing you were Shawn in the tight stuff. It’s got good ground clearance for what it is, and if you try, you can actually give the pipes on the right-hand side a bit of a tarmac kiss.

It’s super-comfy around town, but suffers from cruiser-slouch on long-boring roads, so if your core is not adequately strengthened via repeated sit-ups, dead-lifts and squats, you might whimper a bit. 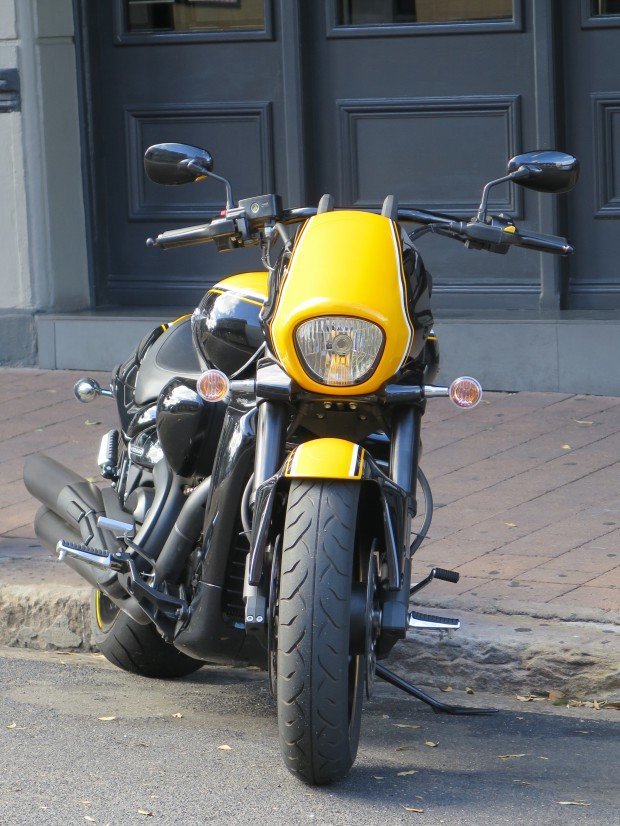 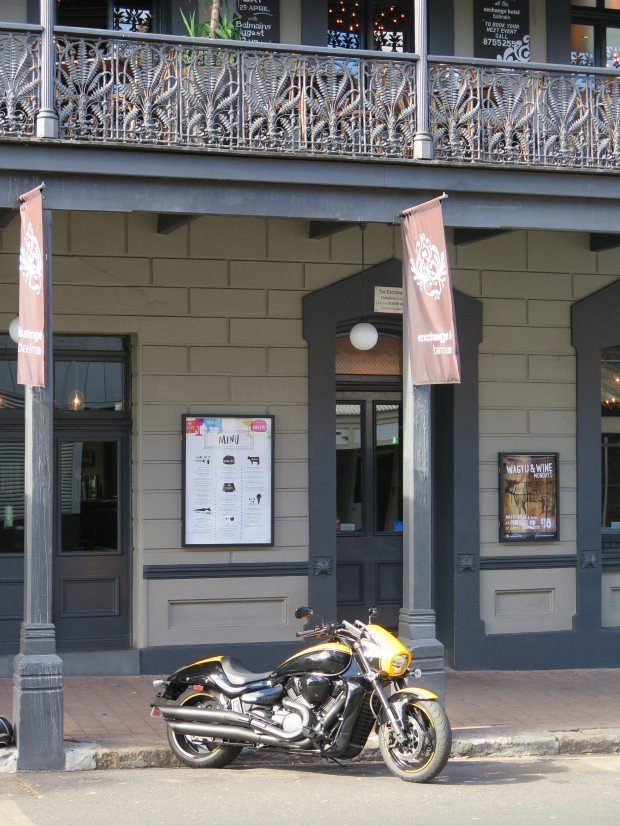 No alcohol was harmed during my time with the MT109R.

I love the fact that the Boulevard has never attempted to ape Harley in its appearance, and its unique styling is certainly head-turning – especially in this black-and-yellow incarnation.

If you’re a dedicated sportsbike rider, you will turn your nose up at cruisers. And that’s fair enough in your world. But as the police draw an ever-tighter net around sportsbike shenanigans and tear up licences on the side of the road while Tasering your kidneys, you might consider a bit of a re-think.

What? Is it gonna kill you to test-ride one of these? Will you ever truly understand the allure of Biblical torque until you do? Are you willing to grasp the nettle of this shaft-driven cyclone?

Only you can answer those questions.

But if you decide to cruiser-fy yourself, let Suzuki drive in those sweet nails. You’ll smile through the entire hammering, guaranteed.

The Suzuki Boulevard M109R Black Edition made me laugh. The torque is just stupid. It idles at 800rpm. At four times that, it’s making a hundred and sixty newton metres of torque, and it’s not half way to the red line. It must have a fair bit of flywheel for a 1783cc engine to idle at 800rpm, and it’s geared WAY tall, so it lunges forward when you take off.

Riding the Suzuki Boulevard M109R Black Edition for the first time in Sydney traffic concentrates the mind wonderfully. You go to put your feet on the footpegs during the lunge and they’re not there. The footpegs, I mean, not your feet. They’re way forward, so you do the dance of your people until you find them, and you get on your way. 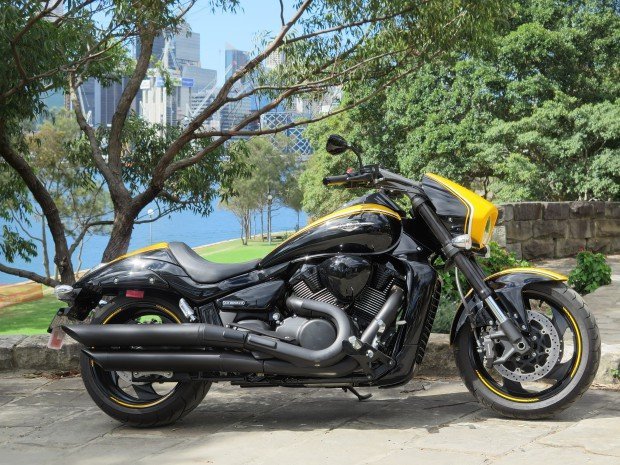 It wants to keep going in whatever direction it’s pointed. It’s long and low. Wheelbase is 1710mm. That huge 24cm wide rear tyre isn’t made for quick direction changes, and the forks are apparently raked 31 degrees. Trail is 124mm. It’s 347kg of understeer that doesn’t understand why you want to turn it.

The experience is all about the engine. It is stupendous and glorious, and stupid, stupid fun. At that fabulous slow idle you can hear individual pulses of air being pulled into the twin filters as well as individual pulses of exhaust gas leaving somewhere behind. They smite the air a mighty blow when you open the throttle. It sounds great. It turns heads.

It looks great, too. You feel like a fifth Horseman of the Apocalypse. The black and yellow one, that laughs a lot, and pantsed Pestilence and put ice down the back of Death’s shirt.

About the time you’re learning that countersteering with a firm hand is essential to getting the beast to change direction, you’re learning that changing gear isn’t that important. Second gear will do up to 60km/h. Third will do up to 80. About 100 is where you change into fifth. If you want. The engine will be turning over at 2500rpm. The gearbox is a bit clunky, probably due to flywheel and shaft drive, but apart from that it’s what you expect from Suzuki, which is pretty damned good. 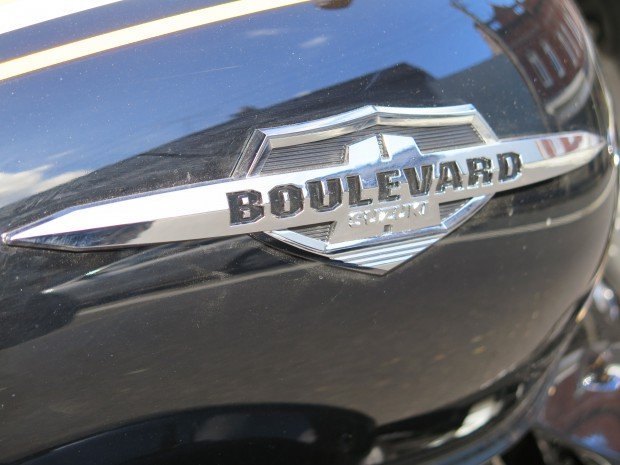 It’s better than calling it “Laneway”.

The brakes need a firmish grip. They’re four piston radial numbers from the GSX-R 1000, but they’re stopping rather more kilos of bike. The rear brake is surprisingly good. The long wheelbase means weight transfer under brakes doesn’t unload the tyre too much, and there’s a lot of rear tyre; so the rear brake can contribute much more to deceleration than you’re used to.

Being so long, the Boulevarde has to lean over further to go around a turn of a given radius. Ground clearance is… well, power cruiser. I touched the tar with both bootheels a lot. I touched a footpeg feeler a fair bit on the right. I touched nothing on the left. It’s hard work on tight winding roads. You have to countersteer to hold it down in the turn. If you hit bumps while you’re holding it down, it does a little slow headshake, reminding you of that 347kg number, and that hitting a bump on the side of a 240mm wide tyre feeds lots of twisting force into the chassis. 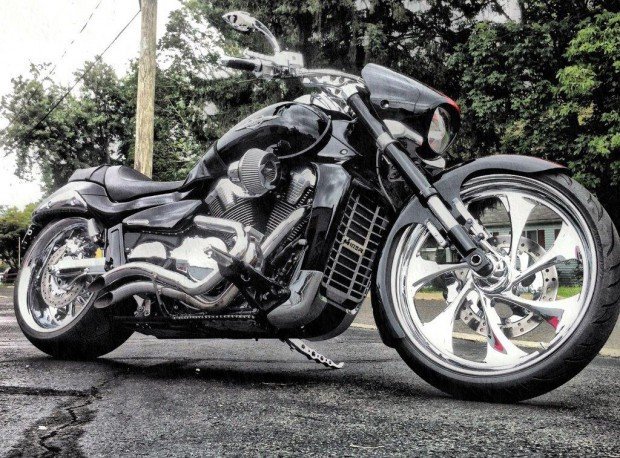 They lend themselves quite well to customisation.

At least you don’t have to change gear much on the tight roads. Leave it in second maybe. It accelerates with authority. Roll it on. Roll it off. Scrape its footpeg. Roll it on.

It’s better with the open road, and gentle sweepers. The high handlebars and forward footpegs make your body into a sail around 110km/h. You have to hold on firmly, because you’re leaning back a bit. The seating position puts a bend in your spine, and it’s not real comfortable; but the big nacelle around the headlight means that it doesn’t get much worse if you go faster. A dead air spot envelops you from about 140km/h onwards, and the buffeting abates.

The seat is wide and well padded, and you can relax and revel in the sound and the throb of that magnificent motor.

Unless you don’t want to relax, of course. In which case, just turn that right handgrip. 200km/h comes up real fast. REAL fast. It’s probably got another 25 left after that, if you’re that interested. I wasn’t.

Well, some of the time, they do.

If the road is rough, you will feel it in your back. You cop a hiding from the rear suspension. I don’t think it’s from any shortcoming in the springing or damping. The rear suspension travel is 120mm: only 10mm less than the fork travel, and the forks are fine. It’s more likely to be the unsprung weight from the shaft drive and that huge rear wheel and tyre. Whatever. Your spine is already curved from the seating position, and it gets hammered. It’s quite fatiguing. 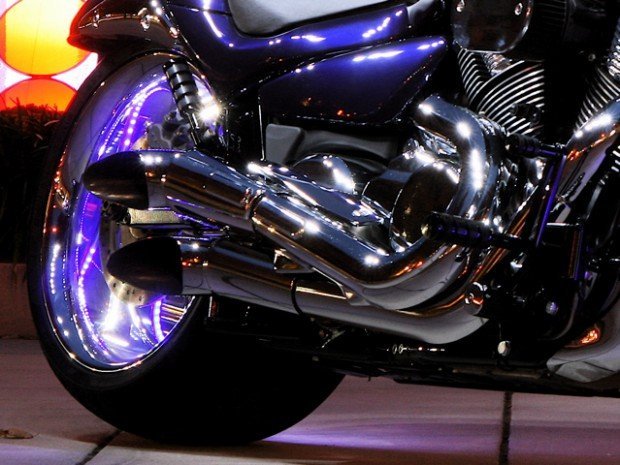 Scorpion makes some nice exhaust tips for them.

Shame, really. The front forks are quite good, the motor’s a mile-eater, and it’s got a handy 19-litre tank which is good for a range of around 300km. But I guess you don’t buy a bike like this for its touring abilities.

On shorter trips, it’s a hoot. Accept that manoeuvrability, precision and your weak spine have been sacrificed on the altar of style. Forgive the thump on bumps. Overlook the weave in rough turns. Look at those fabulous lines. Marvel at that huge rear tyre. Observe the double-takes as pedestrians pass it when it’s parked. Revel in the wonderful exhaust note and intake roar. And laugh out loud as you play with that stupendous torque-pump of an engine.