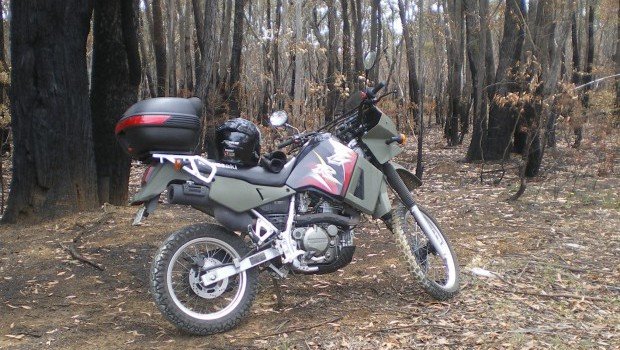 It’s The Road Less Travelled on this particular Thursday. A day off work, and the KLR is closest to the garage door.

Dirt it is, then.

Pacific Highway to Hornsby — Galston Gorge — Wisemans Ferry. I cross the river on the west ferry, and take the dirt roads along the north side of the river, heading west to Colo.

Under the bridge on the Putty Road, Upper Colo Road, Comleroy Road is dirt too.

They are grading it. The road workers move the grader over, and wave me through. It is steep uphill, soft, with rocks the size of softballs in the loam. The KLR spits a couple of them back.

Right onto the track to Mountain Lagoon. I burble along at 3000 rpm, standing on the pegs and letting the bike move around on the soft stuff. I have earplugs in, but I can hear bellbirds. It is a sick forest — bellbirds eat the lerps secreted by a bug that attacks gum trees. There is bushfire damage. Trees are black, leaves are toasted, the ground cover is all burned away.

Back on the tar at Bilpin, and a charge to Bell at two kilometres a minute. Five kilometres after Bell there are some dirt tracks to explore. There is water over one. It looks deep. I’d have a run at it if I wasn’t alone, but I don’t want to be stuck off the road in the Blue Mountains in a bushfire area with a KLR650 on my leg and no mobile phone coverage. The ground is muddy and it takes a long time to turn around.

Another five klicks, and there’s an abandoned airstrip. There are lots of tracks off it, but they are also better done in company. I stop near some bushfire damaged trees at the side, and take a photo. I spray one with nitrogen-rich fluids. A crow alights nearby and watches. I ask him what he is looking at. He takes off towards Lithgow.

Out on the Great Western Highway, then south on Curly Dick Road. Just because. Mainly dirt, a bit of tar before Diamond Swamp Road, which leads to Tarana. 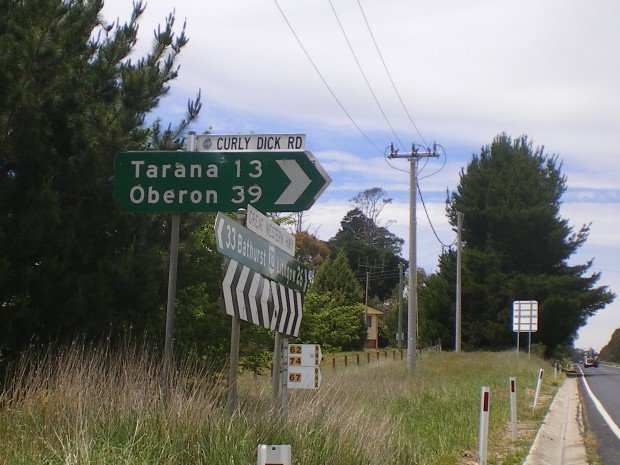 The beer at the Tarana Hotel is cold, brown and bubbly, which is my favourite kind. I order a burger. There is a sweet looking Guzzi V7 outside. It is white, but Guzzis are pretty enough to get away with it. I go back to my table in the beer garden. Some guy drinking with a woman at another table stops on his way to the bar and tells me it is a good day for a ride. I agree.

He asks me if I have the day off. I tell him I have.

He asks what I do for a living. I tell him I am a mortician.

He asks if I am serious. I tell him I am deadly serious.

He says he thought I was pulling his leg. I tell him he was labouring under a grave misapprehension.

A post-prandial palate cleanser puts me in the mood to ride again. The KLR goes on to reserve at 370km. I turn left at the T intersection to Rydal, because I have never been there. It is model-train landscape pretty. I come out on the Great Western Highway.

The attendant at the service station before Lithgow tells me she is sitting her motorcycle licence test next week, and that her father and lots of her family ride motorcycles. I must look as if I care. Note to self: stop doing that.

A guy in a Mercedes 4WD wants to race me coming up the bends outside Lithgow. I beat him like a Singaporean graffitist. There’s a long downhill straight a few kilometres later, and he passes me doing maybe one sixty.

I get him before Bell, and I own the road over the mountains to Richmond – fifty or sixty kilometres later. I shudder at the thought of straight roads and expressways, so I go past the RAAF base into Windsor and take the Cattai Ridge Road from Pitt Town to Glenorie. It’s fun. I do Galston Gorge again – lots of curves climbing out of it, including half a dozen hairpin turns with advisory speed signs recommending 5 km/h.

Then, Edgeworth David Drive through suburban Hornsby to home. Edgeworth David used to live in Hornsby. He was famous for discovering coal in the Hunter Valley, leading an expedition to the magnetic South Pole, and serving with distinction in World War I.

He was also, apparently, very cultured, demonstrated a good sense of humour as well as enthusiasm, sympathy, and courtesy; and never told lies to strangers about being a mortician.

Oddly, the Hornsby councillors have not seen fit to name a street after me.