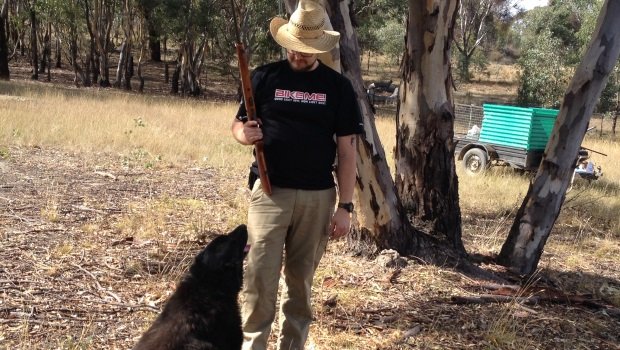 “Can someone explain the point of these Black Dog rides”, Boris requested on Facebook. No-one could. Hilarity and stupid ensued.

I called Gonzo. “Come trail riding”, I said. “You will be driving, for I have no licence. You will be taking our bikes, because you have a ute. I love you dearly.”

We took 50mm thick beef cutlets, and beer, and whisky, and clay pigeons. We drove for over 250km in Gonzo’s ute. We were welcomed like brothers.

“Clay pigeons, eh?” said Ben. “I have lots of twelve gauge.” And he gave us five boxes of twenty.

They contained BBs. One usually shoots trap with birdshot. BBs are way heavier, and the gun kicks like a draught horse while it pushes all that lead out. Gonzo and I ended up with low trap scores, and lurid bruises on our shoulders. Fortunately, the Boags had a slight anaesthetic effect.

Half an hour later, Gonzo had lurid bruises on his left forearm as well. Those compound bows smack you hard.

“Never mind”, said Ben. “Come and I will show you the vacant block next door.”

We got on our motorcycles, and rode out on the dirt road out front to the next block. We didn’t have helmets, and I didn’t have a licence, but a couple of weeks before the gay Mardi Gras was on TV and a whole bunch of police watched some fat lesbians riding their motorcycles without helmets and didn’t bother upholding the law, so I figured it was okay.

Ben stopped after a while at the top of a rise. “The creek’s down there”, he said. ”You won’t get over that.”

“Certainly not with that attitude”, said Gonzo.

It was good to be on a motorcycle again after such a long break.

We went back and cooked and ate the steaks. There was shiraz. Then Gonzo opened his Glenlivet.

We rose at a gentlemanly hour on the next day. Ben made us venison and eggs. Gonzo and I went back to all the un-hit clay pigeons on the ground, and shot them with .22s.

Then we packed our kit and put the bikes on the ute, and left.

“That was good”, said Gonzo on the way back.

“Good?” I exclaimed. “That was terrific. Do you realise that I have a photo of you with a gun and a black dog?”

“Why is that important?” asked Gonzo.

“Because”, I told him, “It will raise awareness.”