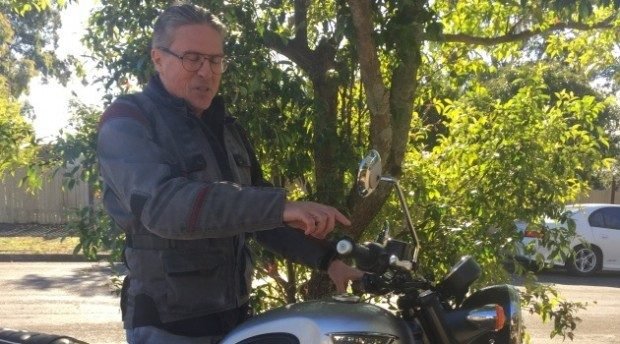 I went to the motocross track at Dargle to watch Daz and Rob and Daz’s kid race their dirt bikes. Boris and Branko were there.  I parked the V-Strom between the 2018 Triumph T120 Bonneville Boris was reviewing and Branko’s thirty five year old Honda VF750 Sabre. Actually, it might be a Magna.  He’s modified it a bit.

I had half a dozen 500ml cans of Oettinger in the top-box, which made me very popular. It didn’t take long for a beery brotherhood to envelop the proceedings. “Take the Triumph, Al”, said Boris after about 800ml.

We walked over to it. “I must warn you”, he said. “It might seem hard to start.”

The last Bonneville I rode was decades ago. It was, I think, a 1972 model. You had to turn on the fuel tap under the tank, then you had to push the tickler button on the left hand Amal carburettor until fuel dripped out and stained the engine cases on its way to joining the oil on the ground under the engine. Then you pushed the kickstarter a bit until you felt the compression start to bite, turned on the ignition, leaped into the air and descended on the kickstarter. The second time you did that last thing it usually started.

“Sometimes”, said Boris as he handed me the keys to the Triumph, “you press the starter button and nothing happens. If you just hold the button down, it will start.”

“It’s probably waiting for the fuel pump to pressurize the fuel injection system”, I said.

The fuel pump theory was an easy one to test, so I did. It seemed correct. I followed Boris in to Windsor.

I was in the mood for retro. I’d just bought a Vostok Amphibia. The Bonnie is a delightful bike. All the torque is delivered low. It’s very rideable. I can’t remember riding a fuel-injected motorcycle with more perfect fuelling.  It has a low seat height and feels way lighter than the V-Strom, even though it isn’t. It could do with a bit more ground clearance though. My boots were brushing the tar a few times on the way in, and twice I grounded the footpeg feeler on the right before we got to that new bar in Windsor.

I commuted on it on the Monday. The GM noticed it in the car park. “New bike Al?” he asked.

“Geez, it looks small compared to your one.”

“More power than your one?”

“Less”, I told him. “Twelve hundred cc, but only eighty horsepower. It’s everywhere, though.”

I looked out the living room window the next day at rain. “The sky is crying”, I said to the girl-child’s cat. “Can you see the tears roll down the street?” It looked out the window too, and thought of nothing, because it is a cat.

It stopped raining. My commute is not long. I rode to work.

“You must be loving that new Triumph” said the GM. “It’s raining, but you still ride to work.”

“It’s okay”, I said. “There’s a button on the right handlebar to push when you ride it in the rain.”

“I don’t know”, I said. “I didn’t push it. I think it’s for if they sell the bike to women or Qantas cabin stewards.”

I gave it back on Sunday. “I thought Triumphs were supposed to have a bit of animal in them”, I said to Boris. “That is one civilized motorcycle. I always felt under-dressed when I was riding it.”

“They are a gentleman’s conveyance”, said Boris. “They’re my favourite Triumph.”

I got back on the ‘Strom. It felt top-heavy and uncivilized. The Arrow exhaust sounded coarse and vulgar. I gave it a bit when I left, in case some of Boris’s neighbours were shift workers or invalids. It boomed and backfired and crackled.

I didn’t care. I was in a hurry. I was wearing a Charles Tyrwhitt chambray shirt with a button-down collar.

I felt a sudden need to put on a black T-shirt.