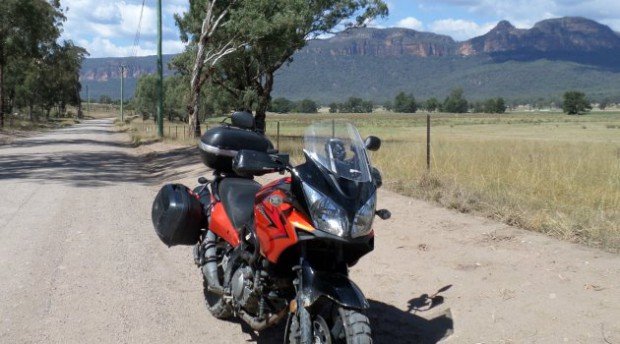 I turned off the dirt on to the Castlereagh Highway about forty kilometres south of Mudgee. I had time, so when I got to Capertee I took the Glen Davis road east for no other reason than it was a nice day and I’d never been on it.

Cracker of a road. Twenty five kilometres of tar swervery, and then dirt for the last ten kilometres or so into Glen Davis. It’s an old mining town, created during World War II when they started mining shale oil nearby, and mostly abandoned in the fifties when the Japanese stopped torpedoing ships and it became cheaper to import oil from the USA.

It sits at the bottom of what I’m told is the widest canyon on earth, with spectacular views of the canyon sides. Farmers grow beef cattle and lucerne on the valley floor nearby. None of the streets in town are paved and there are only a few houses and no shops. There’s a boutique hotel, but its gates were closed and it looked like they catered for weddings, functions and dirty weekends, not thirsty travellers; so I turned around and headed back.

Cracker of a road the other way, too.

I added that area to my list of roads to explore. I headed south on the Castlereagh Highway and over the mountains. I stopped at a service station a bit before the motorway and filled the tank. The young Indian guy behind the counter tried to upsell me.

“Do you have any discount vouchers or a Flybuys card?” he asked.

“None of that malarkey”, I replied.

“Would you like two Mars Bars for a dollar?” he asked.

“No,” I said. “I’m on the Jameson diet, and you’re not allowed to eat chocolate.”

“I have never heard of that diet,” he said. “Is it working?”

“Would you like to buy a DVD?” he asked, pointing to a display of them on the counter.

“Now why would I want to buy a DVD when Rick Astley has a huge movie collection and will lend you all but one for no charge?”

He absorbed this for a minute.

“Which one won’t he lend you?” he asked.

“Well obviously he’s never going to give you Up”, I said, and put twenty five dollars on the counter.

I got home about half an hour later. I told the girlchild I had a hilarious conversation with an Indian, and relayed it to her. She was impressed.

“I can’t believe you rickrolled someone without using a computer”, she said. “You put the fun in dysfunctional, Dad.”

I’m almost certain she meant it as a compliment.