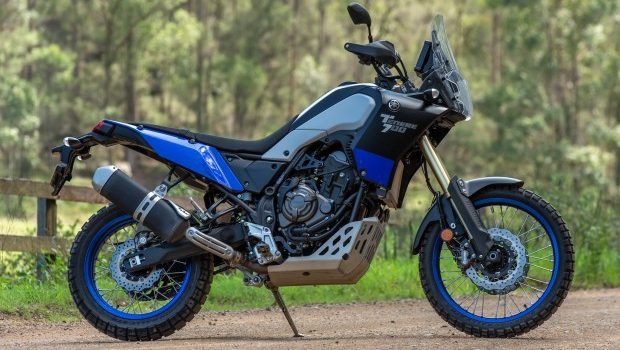 IMAGES BY NICK ‘NO, THERE’S NO WHEELIE ICON IN PHOTOSHOP’ EDARDS / HALF LIGHT PHOTOGRAPHIC 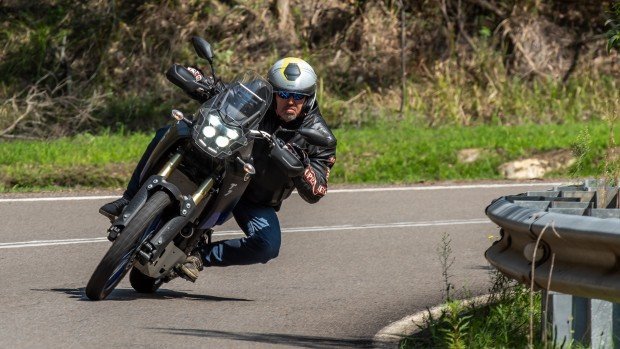 I can hear Nick’s knee exploding from here.

At a time when the evolution of the motorcycle is almost entirely governed by electric technology, the advent of the long-awaited Tenere 700, deserves a round of applause.

As Hedgie correctly pointed out in his review (here), the Europeans adopt a different approach to the Adventure motorcycle paradigm to the Japanese.

BMW and KTM infuse their wondrous machines with every conceivable (and sometimes inconceivable) bit of computerised electronic “rider aid”. 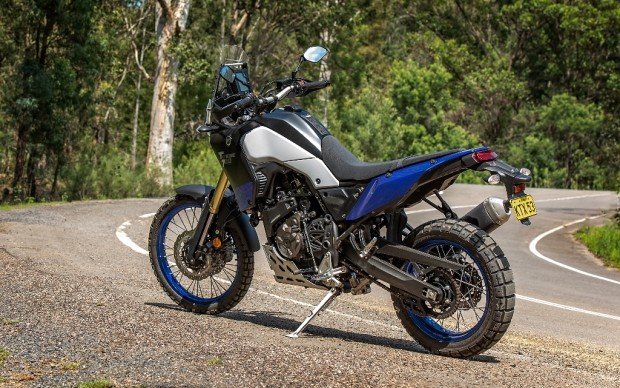 It’s got quite a stance on it.

The Japanese? Not so much.

And in the new Tenere’s case, almost none at all.

The result is an affordable, superbly crafted, and immensely capable motorcycle devoid of anything that might go “Fzzzzt!” when you cartwheel it off a cliff and into a creek. 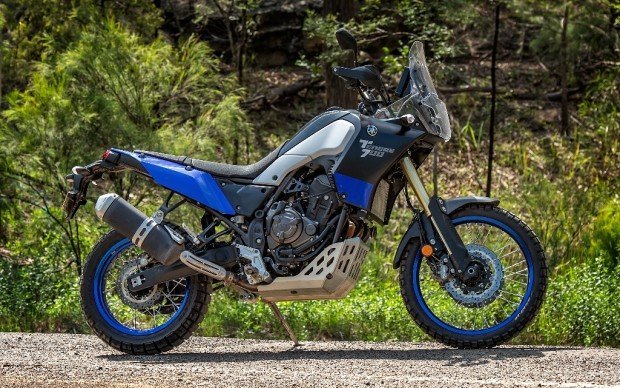 Quite an aesthetic achievement, I reckon.

All sorts of things can happen when you’re on a bike that allows you to explore serious single-track rides, while also being quite at home on the road.

I spent my time on it actually doing that amazing motorcycle thing of: “What’s down there, I wonder?” And then went and found out. 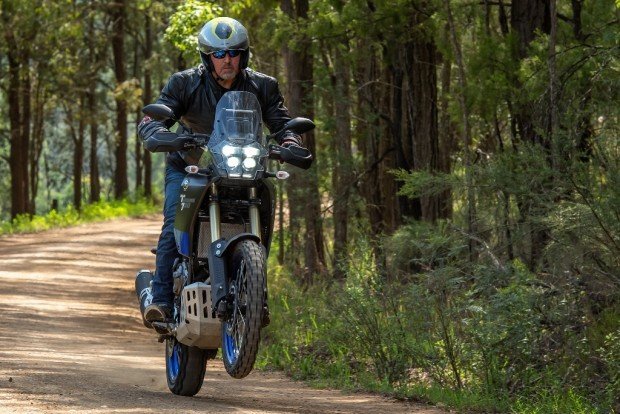 I am scant seconds away from death here.

Stop laughing. It’s not in the realms of possibility I will ever compete in Dakar or the Finke. I’ve exploded and powdered more than enough of my internals over the years to do me until the end comes.

But that’s not the point of the Tenere. 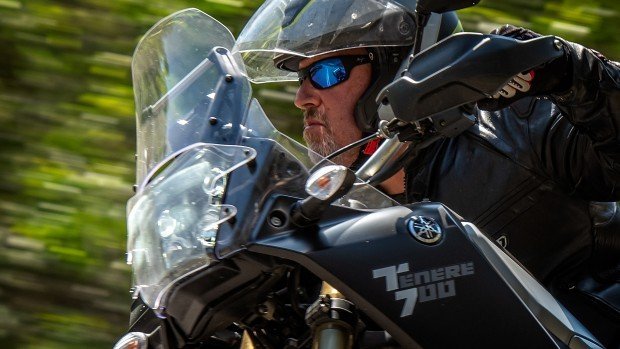 There’s quite a lot of perspex going on here.

The point of its “simplicity incarnate” design is that if you want to see what’s down that terrifying rock-peppered descent, or maybe pretend you know what you’re doing on a nearby fire-trail, it’s more than up for it. And it won’t terrify you, or make demands on your skill set that you don’t have. But if you have a bit of dirty kung fu, then just point its insectile four-headlight face at the challenge and shoot. 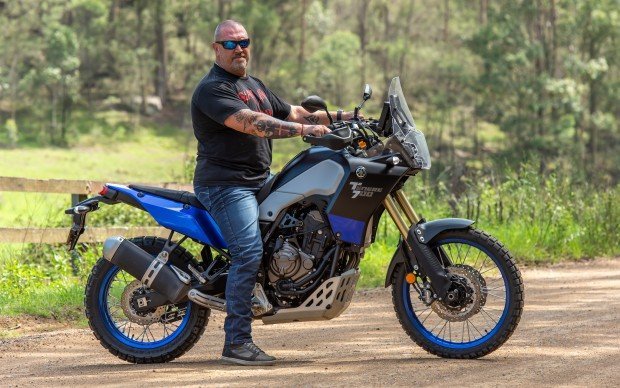 I can almost bench press it. Almost. 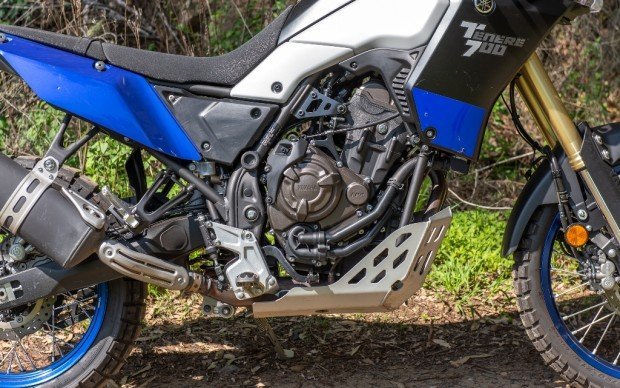 Quite the perfect donk for this business. And do buy the bash-plate. You know why.

You have 74 horses and 68Nm of torque, and you can happily chug around in the higher gears with the donk ticking over at 2300-2500rpm. My eyes were vibrating in my skull due to the track, which is why I’m not precise on the rpms.

It’s a wonderfully avid and eager motor. I didn’t believe Hedgie when he said it “will almost get you to 200 km/h if you persist”, but he was right. It will. So it’s a great commuter. 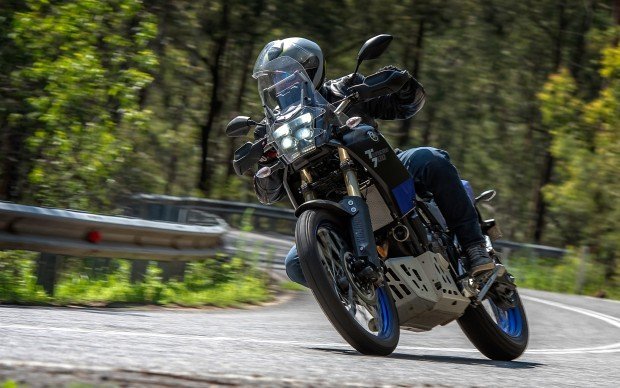 It can certainly do normal corners with aplomb.

Do not expect it to gush torque like a 1200, but be prepared to be very pleasantly surprised at its behaviour on sealed surfaces. On loose surfaces, power delivery off the bottom of the rev-range in higher gears was softer and sweeter than a child’s kiss. I did not speak to Jesus even once. 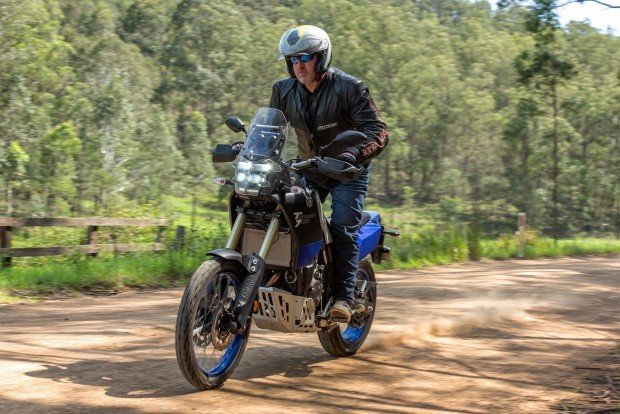 So much cramping in the groinal thigh area.

Mine came without the full-on dirt tyres. And I was on my knees in gratitude. If it came with war-knobs, I would have been required to ride up and down terrible cliffs and off steep berms so you could all laugh at my dirt-shitness while I hated life from a hospital bed. 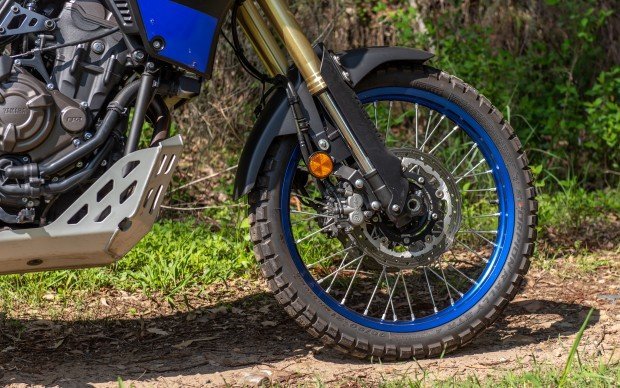 As it was, the dual purpose hoops made it a bit of a weapon on the bitumen (Sorry-not-sorry Gixxer boy with full-race leathers on Mother Putty’s Ten-Mile. You were naffing that up rather badly.), and were not bad on the dirt I rode.

You wanna get serious? Put on the knobs and go your hardest. You can adjust the suspension from “OMFG! Is that a fire-trail!” to “Come at me Erzberg!” I left mine somewhere in the middle and just enjoyed myself. The package is certainly tilted strongly towards dirt, but it’s not compromised all that much on the road, if at all. A great balance, I thought. 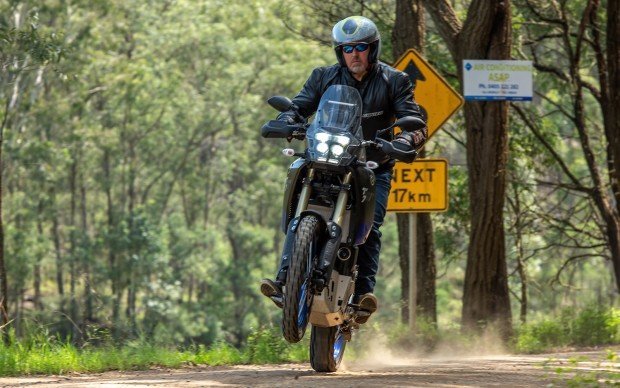 The seat is not bad, you know. Sure, it’s no plush touring saddle, but it’s not the cruel spanking paddle I expected. And you can get a comfier seat if you’re soft. You can also lower the Tenere if it’s too tall for your dwarfism. 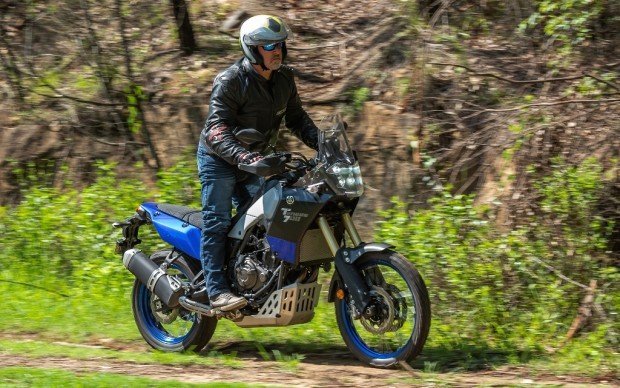 That tree limb is going to hit me in the face.

Stand up ergos are spot-on, and sit down ergos are roomy – even for giraffes. Unsurprisingly, everything fell easily to hand – much as everything has been falling easily to hand since things, hands, and cliches were invented. The boss-looking vertical dash was not a full-colour TFT marvel. But does it have to be that for you to love it? I think not. It can be a bit hard to see when it gets dusty, but what isn’t? I’m not even looking at the bastard when things get that serious.

There’s a button on the dash that puts it in Off Road mode. Press it. The ABS goes off. Happy days. Leave it unpressed, the ABS stays on and is so good – fast and very subtle – that most riders should leave it on in the dirt. Also happy days. 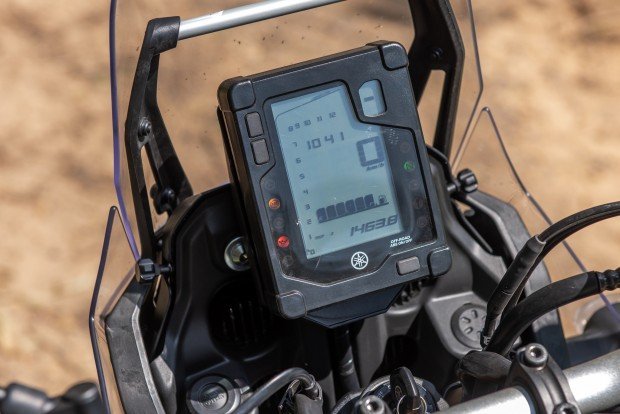 See the big light-grey button at the bottom there? That’s the Off Road button.

The lights were very good at night. I was surprised. The whole four-beam thing spreads and throws high-beam nicely, but could always be nicer. The horn is meh. If the bike is lying on top of you in a gully and you’re leaning on the button seeking rescue, you could be there a while. Hydrate often and apply tourniquets. 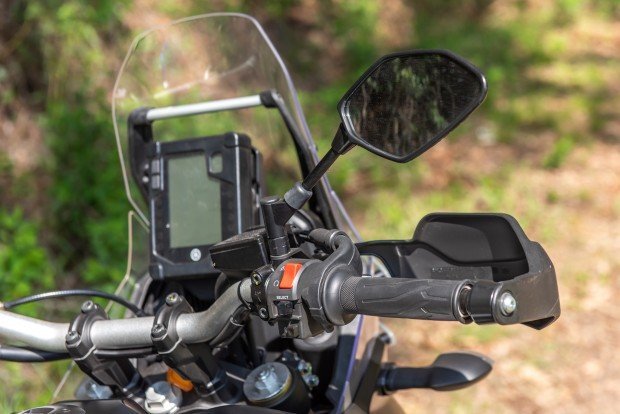 Barkbusters are pretty much a must, and I ask you to note the easy fall of the controls…if only there was a hand there to catch them…

I loved it. It looks pro-level rally with its steeply pitched four-headlight face, wee screen, and tablet-sized dash. Pull up somewhere with it covered in dust and anguish, and look down your nose at all the pretenders styling their adventure on the big Euro bangers. People who buy the Tenere 700 will instantly have more adventure cred than most. It is a true and pure off-roader, and not a Range Rover on two wheels. 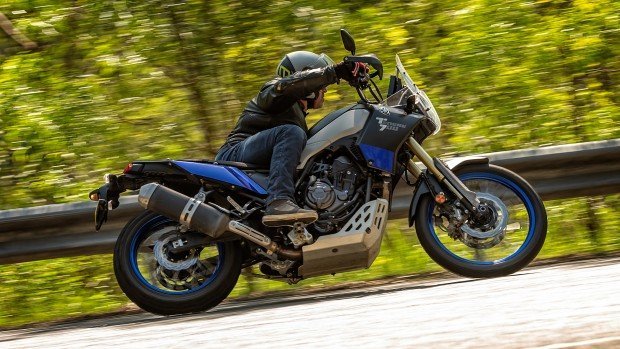 It blurs the scenery just fine.

You will get 320-330km out of the 16l tank. It’s remarkably frugal on juice, but range will always depend on you abusing the throttle. Be an adult.

The Tenere made me feel a bit special – even if I’m not. It gave me confidence to give it a handful when I discovered how well-mannered it actually is on the loose stuff. That confidence is bolstered by more confidence; like the crucial confidence of knowing its electronic simplicity is a bonus rather than a liability. 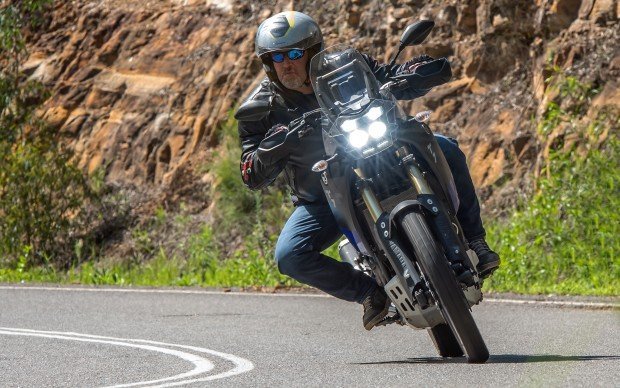 Love the face it has. Mine…not so much.

This is what appeals to me the most, because I’m one of those people who would probably die in the wilderness if my bike’s computers drank the mud of the damned.

I loved the Tenere’s simplicity, honesty and integrity. I was sure it would get me home no matter how many swamps I rode into.

Can it be made into an edgier dirt weapon? Sure. And it might be if sales go well.

But does it really need to walk down that path? It already comes in three guises – each more dirt-biased than the other. Can it go further in that direction? Sure. But from where I’m riding, it doesn’t need to. 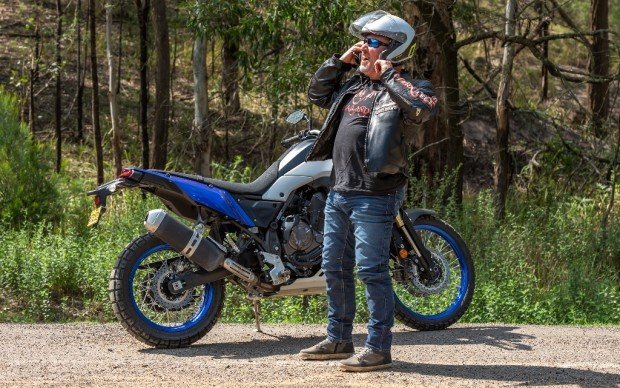 Big success! All the bones remain inside.

For the reasons stated above, the Tenere 700 may well be one of the most important bikes Yamaha has built in ages. It hearkens back to an era where cornering ABS and six-axial-plane-reading ECUs were the stuff of Star Trek.

It’s lighter (a shade over 200kg fully fuelled), it’s easier to ride, more agile, and with better suspension than much of its competition. And it’s much cheaper, designed for ease-of-service, and with rock-solid Yamaha reliability.

Simply put, it is a pure and very capable motorcycle designed for anyone who might want to broaden their riding horizons a bit. Or a lot. 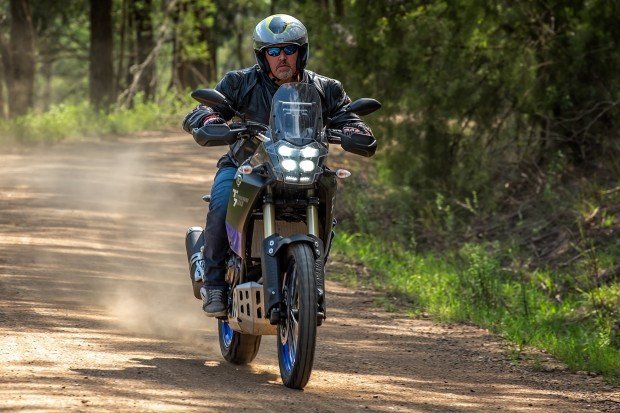 Just needs the carcass of a rhino strapped to the back.

WHAT COLOURS CAN I HAVE? Ceramic Ice, Competition White, Power Black.

WHERE CAN I LOOK AT THE SPECS? Right HERE