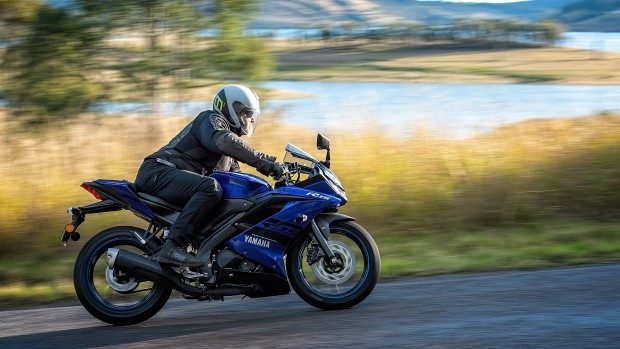 IMAGES BY NICK ‘HOW FAR ARE WE GOING?’ EDARDS 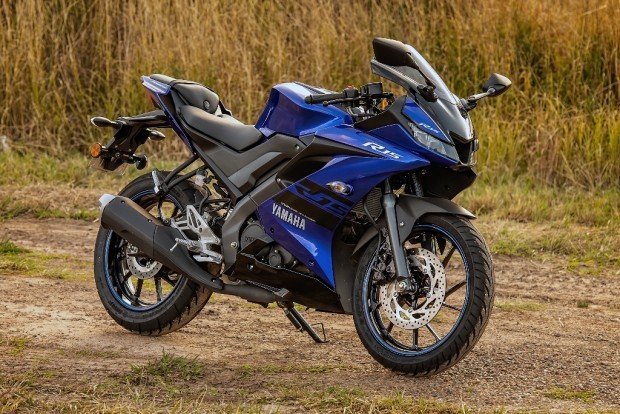 It was a strange day.

The Yamaha man and his truck full of goodies arrived at my house and offloaded an R1. I fizzed, which is a perfectly normal reaction when receiving a superbike to play with.

Then he went back into the van an unloaded another bike.

“Want I should take it back?”

He left and I wheeled the R1 into the garage and went back out to look at the R15. 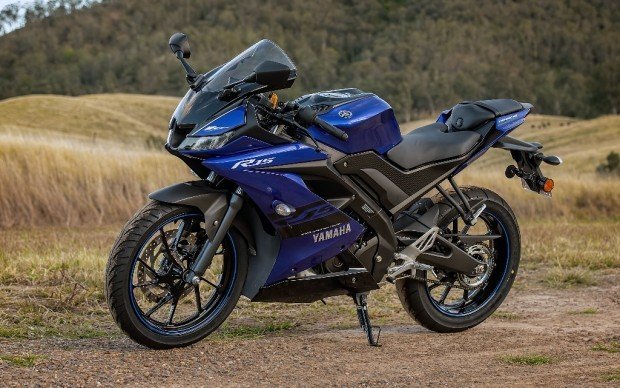 This, parked in your high school car-park, will make you king of the universe.

If I squinted, it looked like an R1. It was the same colour and the same basic shape. Just somewhat smaller. I put it in the garage. It felt about as heavy as a pushbike.

“Did you get two bikes?” my wife asked.

“One can only pray for such things,” I said.

To be honest, I didn’t even know such a thing as the R15 existed. I tend not to pay attention to things that fly so far under my radar, they may as well be flying fish beside a naval destroyer.

I knew all about the R3 – a genuine wee party of a motorcycle with its own race series. Devastatingly fast in corners if you have the cags to carry the corner speed, and arguably the best LAM on the market.

But an R15? What the Hell was that even? 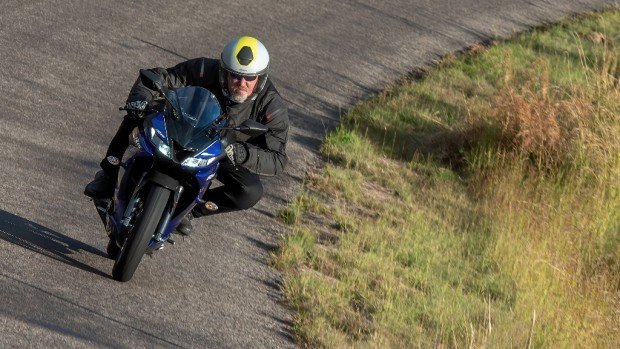 “What is that bus doing on this backroad?”

I thought it might be a 125cc thing, and was vaguely indifferent to discover it was 150cc bike.

“I cannot wait to lash this thing through the bends,” I lied to myself, and thought about what a funny story it would make if I rode it to Darwin. And then I forgot about it and it sat in my garage for a week.

In that time I rode the R1, and a few other high-powered missiles, but each time I came home, the little blue bike would be sitting there, almost defying me to ride it.

I looked at the specs. 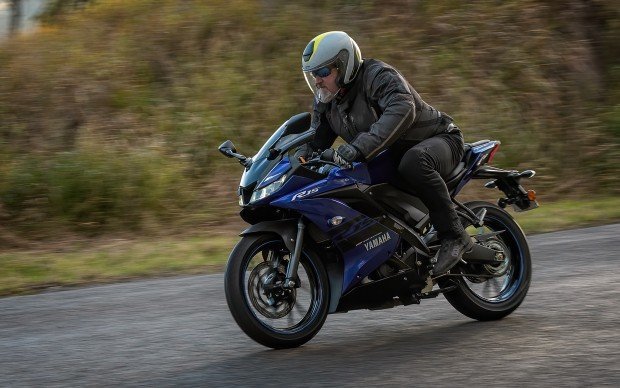 It produces 18-odd horses and 15 Nm of torque, which I told myself was somewhat less than one of those Tour De France drug-fiends manages to crank out of just one of his mammoth thighs.

So rather than a herd of thundering stallions, which is what normally powers the bikes I like, this was more like hitching a bunch of circus ponies to a monkey cart and getting the ape to lash them mercilessly for the amusement of children.

How much fun could this be? What is even the point?

And then I rode it. And it was hilarious. Like, seriously hilarious. I was grinning like an idiot the whole way.

When I started it, it didn’t actually make any noise I could initially relate to. I don’t ride a lot of singles. And it kinda just whirred in a gentle Namaste sort of way. I revved it a bit to make sure it was actually running, threw my leg over it and set off to see what was what.

About five kays into my journey, I figured out the throttle needed to be held wide open all the time. Acceleration is achieved by down-changing. When you do that, the little single tosses its Namaste aspect aside and applies itself to the business of accelerating a man who weighs two cases of beer less than it does, forward.

And yes, it will get to about 125km/h before both of us become disinterested in anything further.

This was not motorcycling as I understood it, but there was an aspect of fun to this unique caper I had not expected.

Importantly, the R15 handles very well. Which is crucial if you’re to maintain any sort of pace on the road. On a big bike, you can rely on its power to fling you out of a bend you’ve probably over-braked going into. Well, you can’t do that on a tiny little bike like the R15.

So you don’t over-brake. In fact, you don’t brake at all.

You might ease off on the throttle a whisker, pick your line, lean into the bend, and then just open everything wide and be amazed at your corner speed – because it is ALL about corner speed. 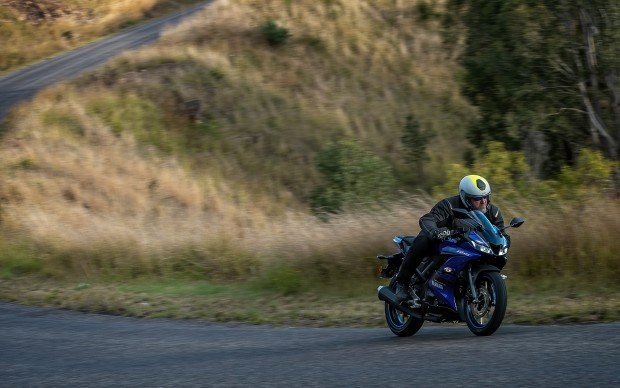 Damn you, gravity! I still have three more gears to downchange to!

Despite its relative slight weight and size, the R15 behaves with a solid integrity on the road. The un-adjustable suspension is a pretty good compromise. Someone around the 80kg mark would find little to complain about, and even I would only wince if the pothole was big. Normal road irregularities aren’t an issue because you’re not going hard enough for them to become an issue.

Yamaha has ensured this year’s tiddler comes with a true Deltabox frame – the same type it uses on its bigger sports bikes, and has made it wider at the swingarm pivot to allow the fitting of its delta-shaped swing-arm, which, in turn, allows the fitting of a slighter wider rear tyre (140/70-17). This means better handling.

For 2020, you also get a bigger front disc-rotor – the single front unit is 15mm bigger, at 282mm with twin-piston calipers, and the rear is a 220mm jobbie with a single piston caliper. And yes, it has ABS.

And you know what else it has? A slipper clutch! Don’t laugh. Compression lock is only funny if it happens to someone else. 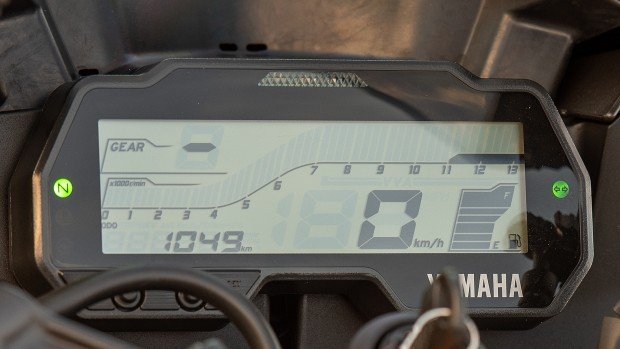 It uses no petrol. This is the fuel gauge after 90km.

Like I said, riding it is hilarious if you’re used to much bigger bikes where judicious applications of throttle are a must. The R15 is a throttle wide open experience. Even in the wet.

It’s actually so light and responsive, I found myself enjoying myself immensely, despite the lack of bang I was used to.

I wasn’t cramped and I thought I would be.

It was great on a wet and twisty road, and I thought it couldn’t be.

It didn’t do any weird midget-sized bullshit to me, and I thought it would.

It’s just a great little bike, and I didn’t expect it to be.

I guess pretty much all of Asia, where crazy teenagers will put Number 46 stickers on it, and race it up and down rain-forested mountain roads with cows strapped to the pillion seats.

Heaps of room for a cow on the back.

In Australia, its commuting credentials are rock solid. Traffic is so bad in Sydney these days, something this small and agile would beat a cheap Chinese death-trap scooter hands down, and teach you how to ride motorcycles at the same time. 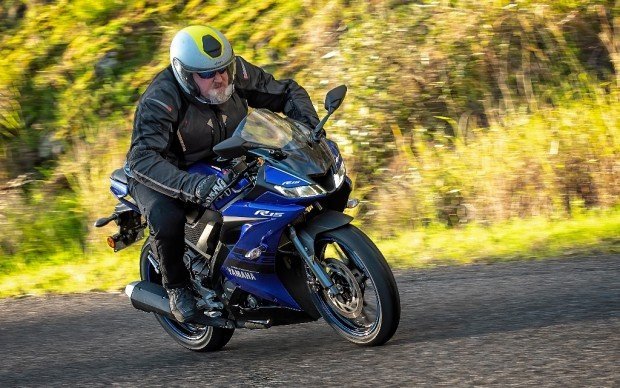 I lament the lack of a solid 125cc racing career.

The R15 is simple, and gentle, and kinda sweet – like one of them country girls Wille Nelson sings about. It’s a 155cc motorcycle with a good deal of actual panache in terms of styling and road-manners, and it costs less than a big weekend away. And it doesn’t seem to use any petrol. I think it just needs to see a petrol bowser now and again.

You should buy your kid one for Christmas. Plant the acorn. Await the oak.

What else ya gonna do with that 10K you reefed outta your Super?

COLOURS: It comes in Yamaha’s beaut deep-sea blue, and there’s also a grey and red version.