Getting my Autumn on.

I’m starting to think if Yamaha sewed a dead hog to the top of its brilliant MT-09 engine, rammed a set of bars through its head, and painted its little tootsies blue, it would still be brilliant to ride.

Is there no end of good that can be attached to that wondrously reliable, robust, and punchy engine? Seemingly not.

For sir’s longer hauls, the GT is fitted with hard panniers, a small but effective screen, and a seat that will not gouge at your bum like it once did. 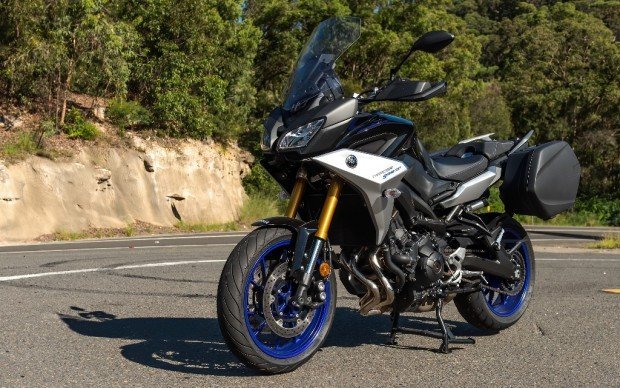 Kiddies, a centre-stand is like a race-stand for the engine.

Tear off the panniers, find your favourite Sunday road, and go scare a few sportsbike riders. With a few tweaks to personalise the suspension, the Tracer is well up for some proper hooligan business.

During the week, it is a commuter par excellence. It’s hugely manoeuvrable and slim enough to lane-split, even with the bags on because they don’t extend past the ’bars. It’s just an easy bike to ride – and always has been. 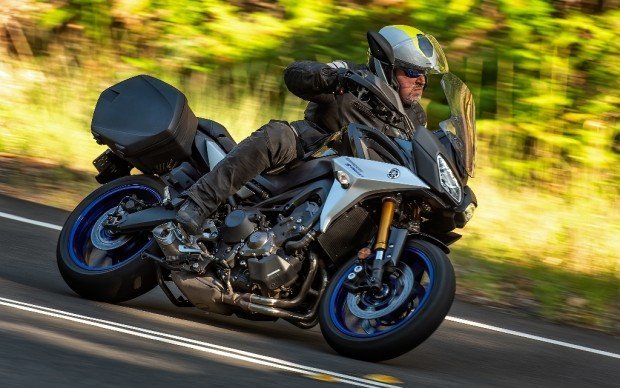 Through the fog of Plague.

“I WANNA RIDE TO PERTH!”

If you’re thinking of serious touring, then I might suggest not over-loading the GT. By that, I mean if you’re a hefty chunk of lad, and you’ve got a hefty pillion, and you need to carry 100kg of crap with you, there are other bikes better suited to your particular needs. Normal people will find the GT’s touring credentials rock solid – all-day banging at 120-140, with enough verve to easily pass slower creatures, and a generous pillion seat if she (or he) hasn’t been into the biscuit tin too much. 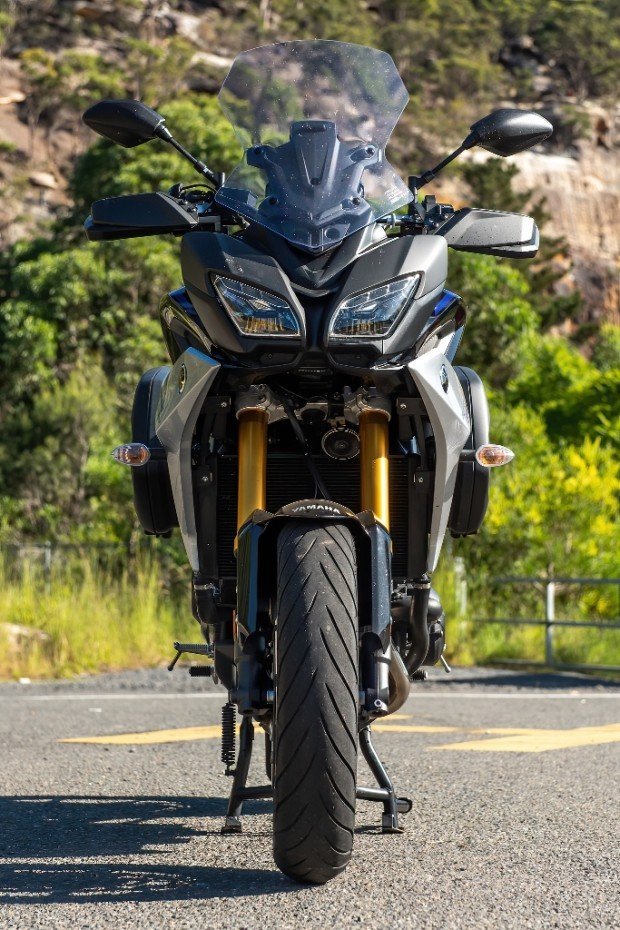 It is very narrow for a panniered bike. 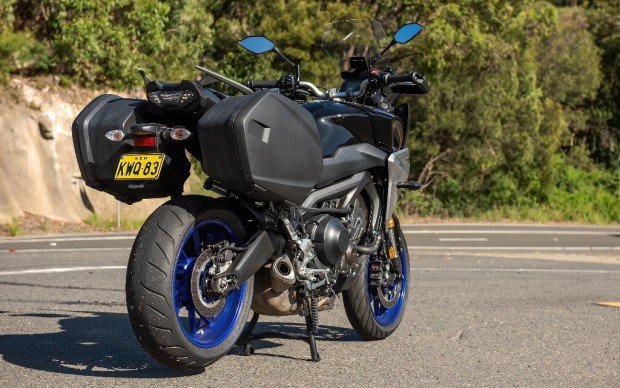 But photo-angles can be deceiving.

And once the corners start and her (or his) hands tighten on your belly with excitement/terror/anger, then the GT really comes into its own. It is a true neutral-handling treasure – forgiving when it’s forced to be, but wickedly able if you are.

And if you’re running out of ground clearance, you champion you, just unscrew the world’s longest foot-peg feeler-knobs and away you go. 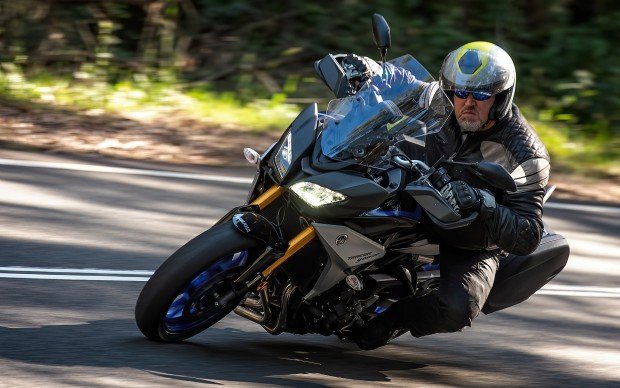 Be nice if both headlights were on at low-beam. Be better if you could just turn them off when you wanted to. A solid all-colour TFT dash, heated handlebar-grips, cruise-control, hand-guards, a quickshifter that likes being loaded (rather than you just being too lazy to use the clutch at lower revs), a very reasonable 18-litre tank (easy 300km out of it), a centre-stand, fully adjustable suspension front and rear (with the rear boasting one of those remote twirly adjusters), and a relaxed upright riding position with good leg-room, completes the GT’s touring cred. 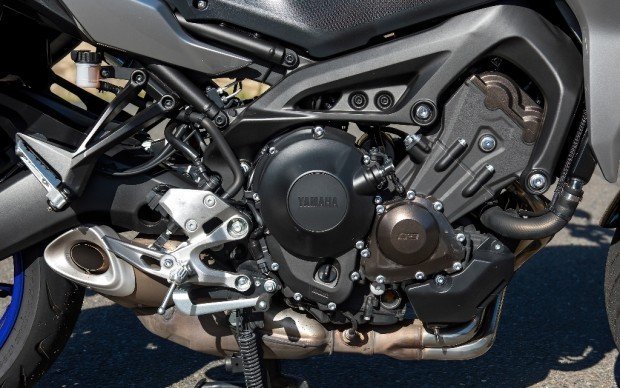 The warrior-monk of motorcycle engines. Honest, hard-working, but can belt your enemies if asked.

The headlights are decent, the horn is sallow and eepy, the screen works well even at shameless speeds and doesn’t vibrate and annoy. Even the menu-scrolly thingy on the right-handlebar wasn’t too annoying.

If you do like to get on your toes in the championship rounds, you’ll find your heel seems to find the rear-footpeg mount. But so few people ride like that, most won’t even notice. 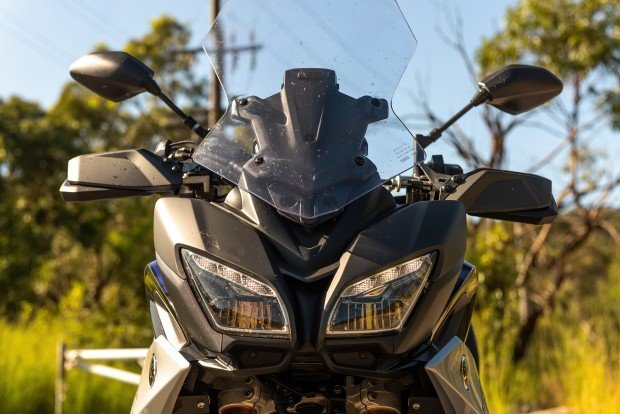 I do like daytime running lights. Not for safety, but because they make me feel all classy. 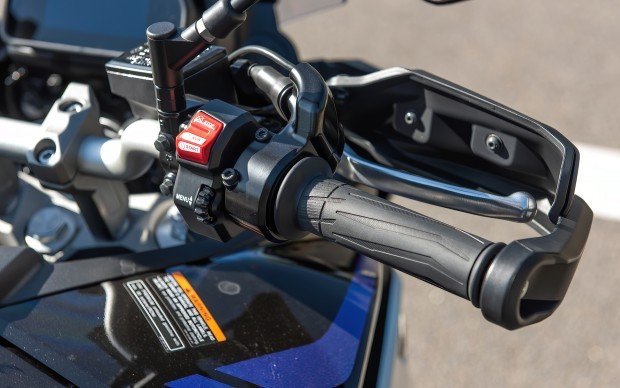 If you put your hand here, everything would just fall into it, easily. Note the menu-scroller just below the starter switch. Same on this side. Just waiting for a hand to fall into.

Hard on the gas and that wonderful engine lets you know it’s keen. There’s that almost organic triple-vibe through the ’bars; it’s not at all unpleasant or invasive. It just lets you know energetic things are going on. The addition of a hate-spitting exhaust seems almost crucial, in my mind – and those triples do sound great with a can. Otherwise, just enjoy being left alone by the cops.

Can I fault it? Well, it doesn’t come in Jewish Racing Bronze, and it would look funny with apehangers. “Is Nick spraying himself with Holy Water?”

Its appearance has been totally redesigned and it looks much more homogenous that it used to. It’s quite a handsome laddie, I feel. Build quality is typically high-end Yamaha.

I know some of you will lament the lack of a top-box. Don’t be like that. The panniers are generous, but no, you can’t put your helmet in them. It’s a solid, honest, and utterly reliable all-rounder. It does everything – scratching, touring and commuting – better than well, and nothing at all poorly. Versatile, is probably a good word for it – but versatility with teeth.

So I did, and very much so. “Where is that Highway patrol going?”

Do the controls fall easily to hand?
Like breeze-kissed autumn leaves onto a well-mown lawn. Unless you’re missing a hand. Then not so much.

The paint, does it glisten?
Like the tears of a clown who has had a trapeze artist fall on him. And you can get it in glistening all-black if you’re a Goth.

Are the waves of torque creamy?

Well, there’s just over 80Nm of surf here, pilgrim, and every one of those waves is rich, like fresh buttermilk. MT donks are all about useable torque, but you knew that, right? Peak cream is at just over 8000rpm and peak horse (115) is at 10,000rpm.