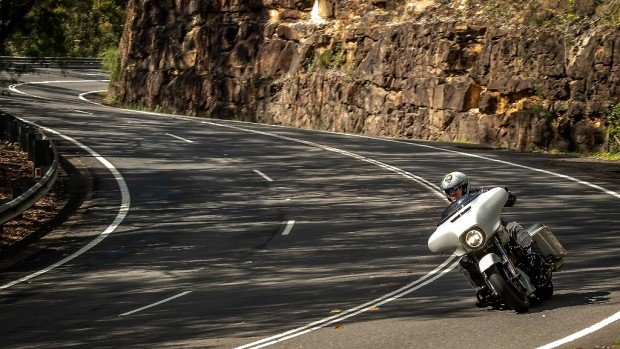 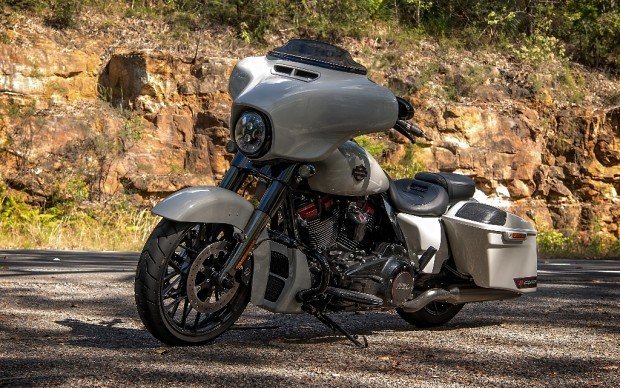 Probably the finest battleship grey paint you will ever see.

When this slate-grey display of road-majesty was wheeled off the truck in front of my house, I was very excited.

A CVO! I had never ridden a CVO! I was about to ride a CVO!

What wonders awaited me? Surely, as the pinnacle of Milwaukee’s many offerings, this gleaming CVO Street Glide would stand head and shoulders above them all!

And so began my struggle to love it.

I wanted to. I really did. 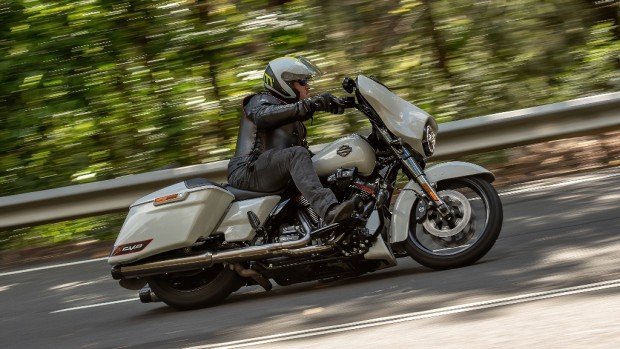 I did my best not to grind the very expensive footboards too much. So sparks are at a minimum.

But then I didn’t. And I must explain why this happened, so you will understand.

I “get” Harleys. Hell, I’ve done several hundred thousand kays on various ones over the years, owned a few, entered them in bike shows, and have the trophies to prove it. I very much appreciate their appeal, while also accepting their limitations. 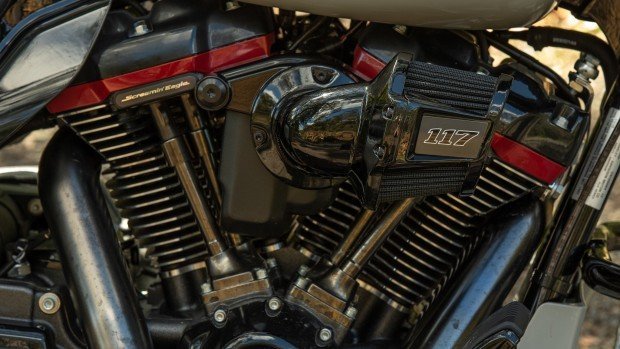 In this regard, I am very different to many bike reviewers. The Harley-centric ones especially. The people who write for the Harley mags and platforms are handicapped in many ways. Firstly, most of them have not ridden other motorcycles and so can only compare a Harley to another Harley (or an Indian). So like is invariably measured against like.

Secondly, the existence of these brand-fans (for that is all they are) relies on Harley’s good graces in terms of advertising dollars, so as long as the dreary copy they produce extols the brand, they can continue producing that copy. 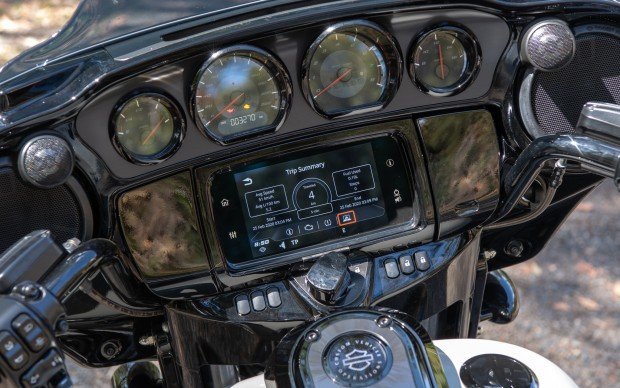 There’s a lot going on here. 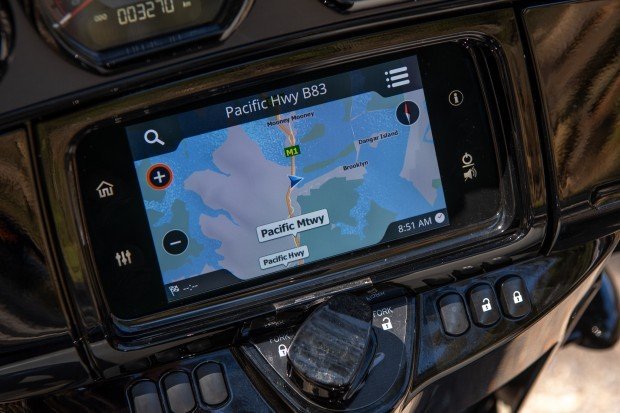 Not all who wander are lost.

This has been demonstrated to me time and again over the years, and never more obviously than at the recent Livewire press launch. The Harley-mag droogs had lathered themselves into a shameful frenzy at the Livewire’s acceleration. When I pointed out the Livewire didn’t accelerate any harder than a 600cc Jap Supersport, I was treated to frowns and confusion. 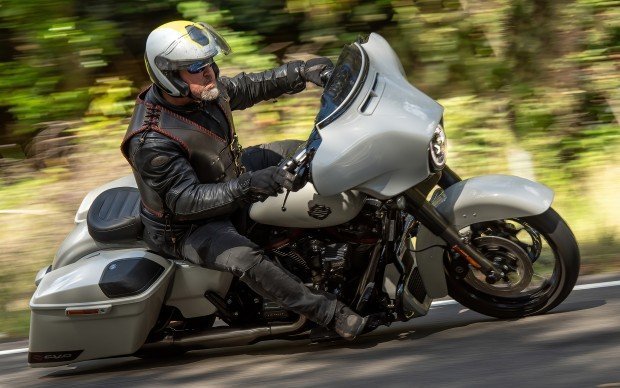 This is my “Listening to Katy Perry” face.

It didn’t matter to them how the bike actually performed in comparison to other bikes, what it offered that was special, or what would happen if you punched it hard into a corner full of terrible bitumen. It was a Harley, and therefore it was to be venerated without question. 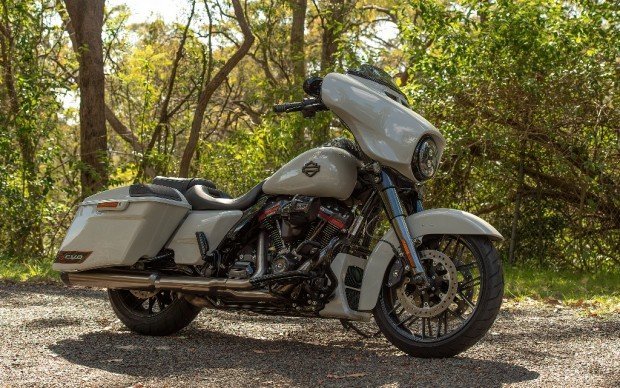 It certainly has some presence.

Then you have the other side of the coin. The traditional bike-media. The Top-Of-The-Gamers, as some like to see themselves. They mostly silently hate Harleys because all they can see are the brand’s limitations when compared to the Jap and Euro offerings they prefer to ride. And they condemn and revile the outlaw lifestyle upon which Harley made its bones and from which it still draws its unique voodoo. They don’t get that crucial aspect of it, so they fall back on that which they do best, and that is adding adjectives and adverbs to the technical specifications. 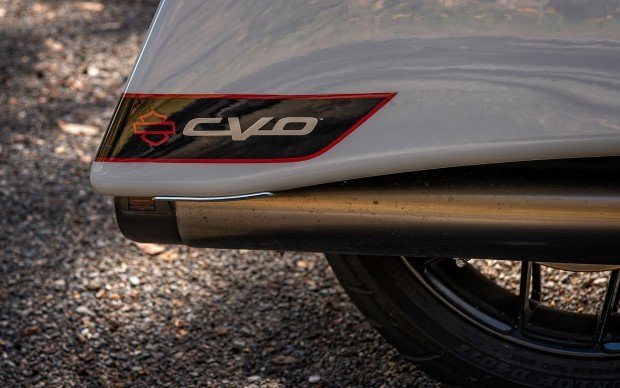 In case there is any doubt from the unwashed.

Harley, of course, knows this. It cannot do anything about it, because it is what it is, but it puts the brand in an invidious position when it comes to handing out bikes for review. Invariably, it will always favour the Harley-centric mags and platforms, and it has spent lots of marketing dollars flying herds of free-loading media drunks all over the place and feting them like lords. Thus is favourable copy assured, world without end.

Except that world has ended. 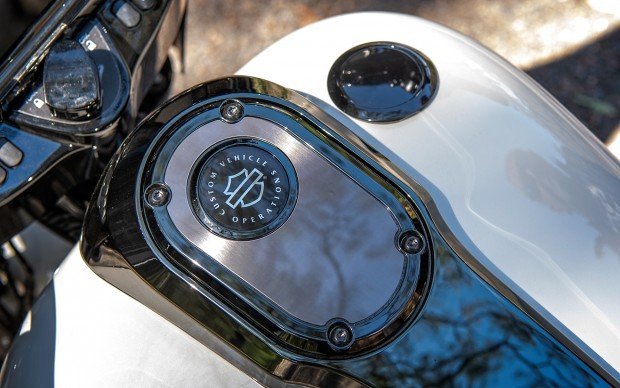 The petrol cap (round black thing on the right) sits flush with the tank, and to access it you need to press it down and turn.

The time has now arrived when Milwaukee must seriously re-asses its motorcycle offerings. It must start paying attention to areas of motorcycle design it has hitherto largely ignored – mainly chassis integrity, brakes, and suspension. It is no longer about the bling. And it hasn’t been about the outlaw cachet for a while.

It is now about the bang. And the bounce. And the always important “Oh sweet Jesus could you have put some proper brakes on this thing?”

This is the mindset in which I received the CVO Super Glide.

To look upon it, it is truly a statement. This is a CVO – which stands for Custom Vehicle Operations. It’s Milwaukee’s equivalent to Benz’s AMG badge – three letters that indicate a level of special not offered to just everyone. 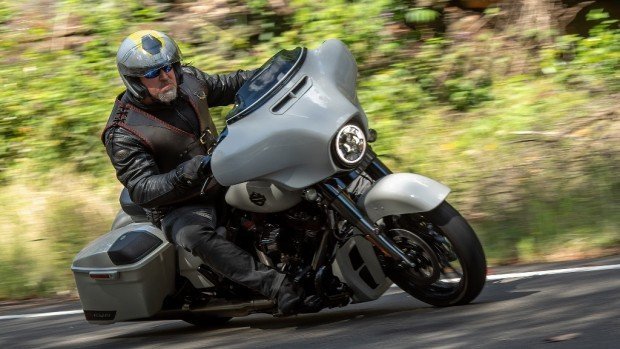 Nothing like some Demis Roussos to sing your blues away.

And the price reflects that. This is a bike you’ll pay sixty grand for. It is be-jewelled and be-glossed, and boasts the most powerful motor Milwaukee has ever wedged into one of its frames.

And it left me shaking my head and wondering why anyone would pay that kind of money for it.

There aren’t all that many 60K bikes out there. The ones that do live in that price-range are usually high-end Italian weapons or luxurious German tourers with every conceivable electronic gee-gaw. 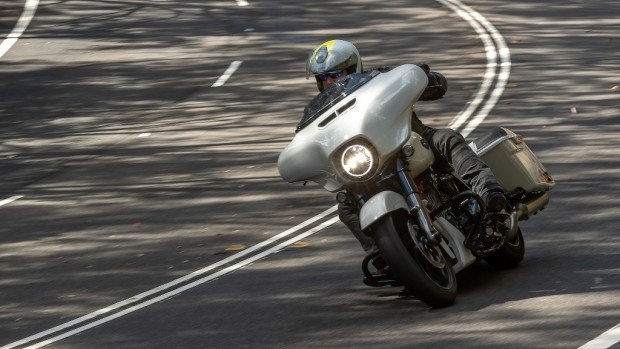 I’m a big fan of the Daymaker headlight.

The CVO Street Glide just does not cut it in that rarefied atmosphere, but it does look the business, I will give it that.

But for that kind of money, I would expect high-end suspension – and this was my biggest disappointment. Harley’s decision to not try very hard when it comes to its suspension is forgivable on its non-CVO range. After all, its customer base tends more to parades and gentle speed-limit cruising than seeing how fast the bike can be ground into a V-shape. The 49mm non-adjustable Dual Bending Valve Showa forks up front are maybe adequate for American highways and our smoother expressways, but not for much else. Our back roads will very quickly show up the suspension’s failings. And loading up the forks with 50kg of stereo-filled fairing and computer doesn’t do it any favours.

The dual shocks (only adjustable for pre-load) on the back really struggle to deliver anything resembling a plush ride. 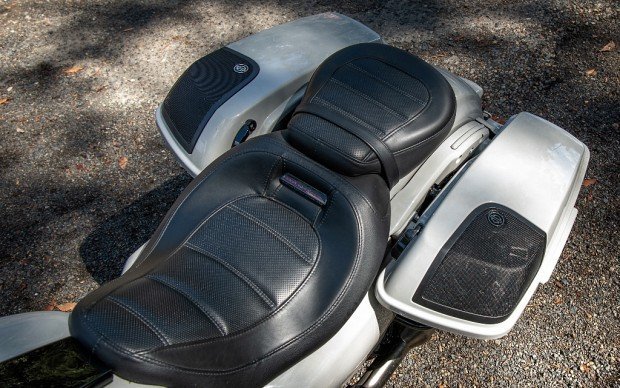 The seat is excellent…it comfort is just let down by the suspension.

Pushed into corners (no, not very hard), the Street Glide tends to weave some on the back tyre. Us old warhorses know some judicious use of the back brake assists here, but it is 2021, people. Why is this even happening?

I pillioned my son from Sydney to Singleton down the expressway, and we were both somewhat brutalised by the experience. Granted, that stretch of road has some serious bumps, and we smashed into all of them. Come on, Milwaukee, if I’ve shelled out 60 large, the suspension needs to better.

On that trip, I also found my calves would invariably snag his feet each time I came to a stop or had to waddle the bike into a parking spot. Did no-one at Harley HQ double anyone anywhere? 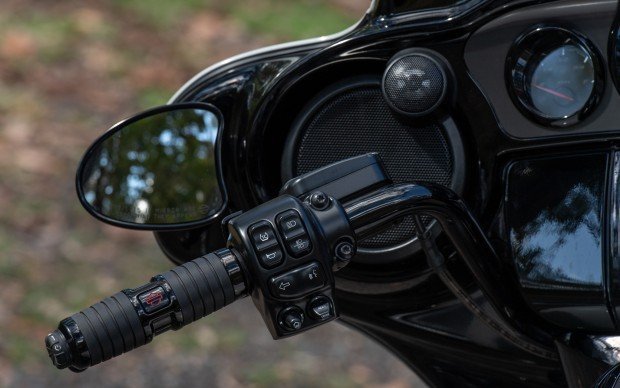 How trick are those grips? On the end of the handlebar is where the dial for the heated grips lives. I would inadvertently snag this now and again and my hands would burn. 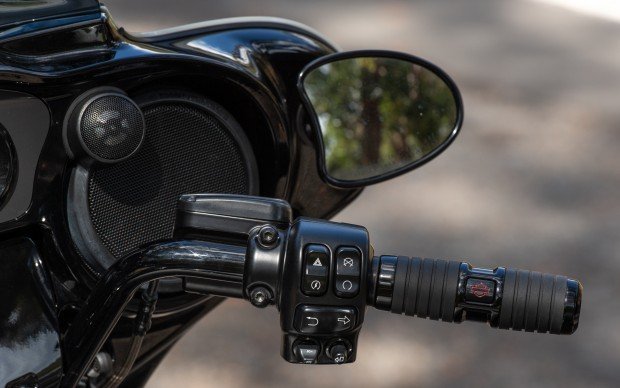 The right switchblock is almost as busy as the left.

The gorgeous 117-cubic-inch donk with its scarlet Screamin’ Eagle heads churns out 169Nm of torque and some 94 horses. I found it somewhat doughier around town than the 114-inch engine, but it was more responsive over 130km/h and had a slightly higher top-end than the smaller engine. If most of my riding was around town, I’d opt for the 114-cube engine. Once you start asking Harleys questions at 150-160, they seem to not have suitable answers anyway. Like the rest of the range, their happy place is between 120 and 140 – and that is just right for Harley’s customer base. At that speed, the 117-cube CVO is smooth and satisfying in its progress.

The linked brakes are adequate – but once again, don’t ask them any hard questions, or anything about how that price-tag can justify itself when these are the same brakes you’ll find on the non-CVO Street Glide. Happily, the CVO comes standard with an electronic slipper clutch, hill-hold, cornering ABS and traction control. 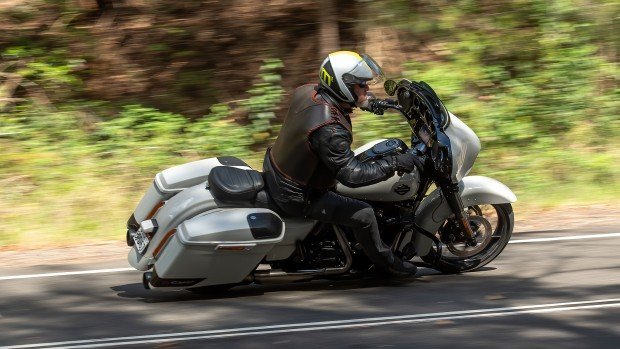 This is about as funky as you need to get before you start grinding the dollars off it.

Electronically, it has the goods its customers would expect. The Gorilla Glass screen is big, and you can link it to Apple Play – which is when you’ll discover the stereo – which is one of the bike’s big selling points – is pretty useless over 100km/h. I also wonder why anyone is spending any time or effort in developing this aspect of any bike, given the progress of in-helmet sound-systems. Wind noise will start to cancel out any sub-1000-Watt bike-mounted stereo systems once you hit that magic 100km/h – especially if you’re also wearing a full-face lid. The only reason I can now see for a stereo on a bike is so other people can hear what you’re playing. And what does that say about you?

But its swipe-screen works much like your phone and it boots up in about ten seconds. The screen is busy and the smaller numbers are hard to read, but it is pretty trick nonetheless. 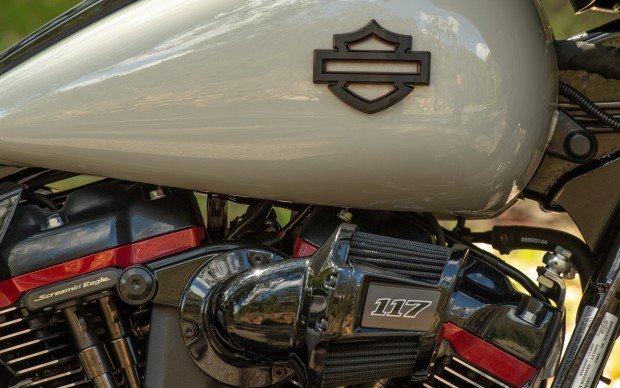 The bar-and-shield is without words thesedays.

You’ve got 23-litres of petrol and 63-litres of storage in the panniers. Neither of which will accept a helmet. Ridden gently, you’ll get between 350 and 400km out of a tank, and its comfy enough for you to walk unaided into your accommodation with your helmet proudly on your arm.

I found it a chore to cart pillions, mainly because of the suspension and the fact the stereo wasn’t loud enough to cover their whining.

So I mainly rode it alone. I wondered at the effectiveness of the fairing when the buffeting got unpleasant at 120-plus. I marvelled at the gorgeously-wrought foot-boards and grips. I enjoyed the muffled rumble when I was riding like a well-mannered HOG member with dodgy knees and a belly full of liver pills. 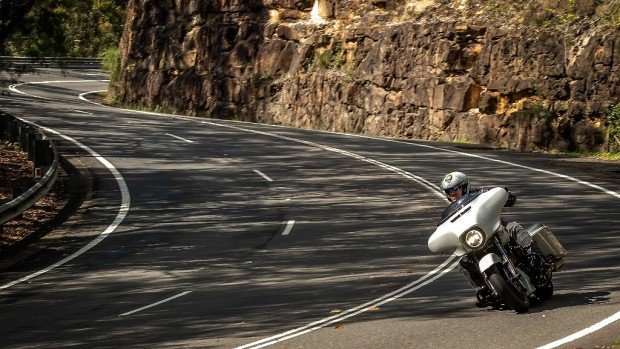 This was a good day.

And there were times when I really did enjoy it (until my bruised shin hit that wretched air-intake), and each time I parked it somewhere I would look at it in wonder. It really was a beautiful and majestic creation, and its levels of finish were very high. The bling factor was off the charts.

And if that’s you, the 60K price-tag is neither here nor there. You’re buying a big statement, and money be damned.

But that is not me.

In all honesty, I far preferred the 30K Road King I swapped the CVO Street Glide for at the end of my month. It handled better, it had a livelier motor, and had none of the redundant sound-system or massive, weighty fairing to screw with how it behaved.

In the end, I could not see how the extra 30-odd grand could be justified for the CVO – as magnificent-looking as it is.

If you were wedded to the bar and shield, sure. I get it. The CVO is the ultimate factory custom exercise in that regard.

But if you’re just set on a bagger, then I would suggest you compare it to the Goldwing, the K1600, and Indian’s amazing Challenger. Ride them all. Then make the call.

All the specs can be viewed here. 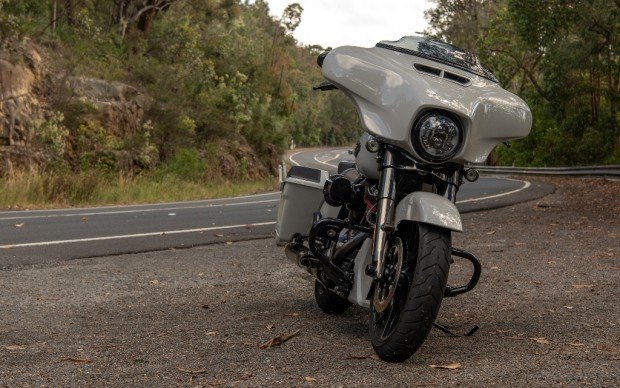