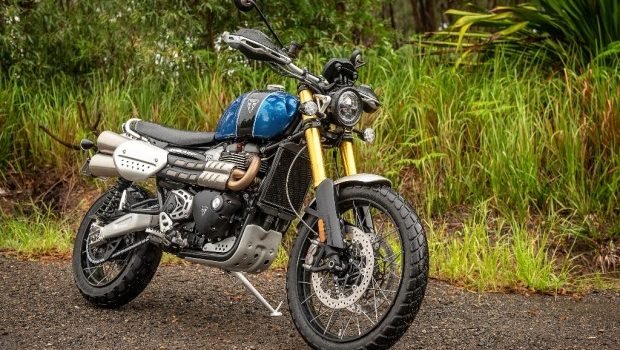 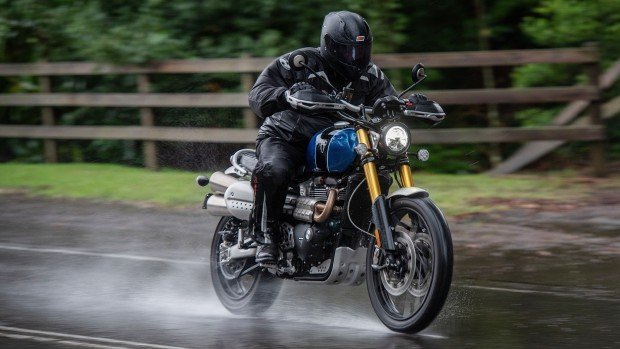 “This is not at all like a spray tan…”

IMAGES AND GILLS BY NICK EDARDS / HALF LIGHT PHOTOGRAPHIC

I wish to make a few things clear right up front.

Yes, by all means pile the knotted angst-panties over in that old field of mine where they may nourish the rat’s intercourses I still do not give.

Everything I state will be qualified. 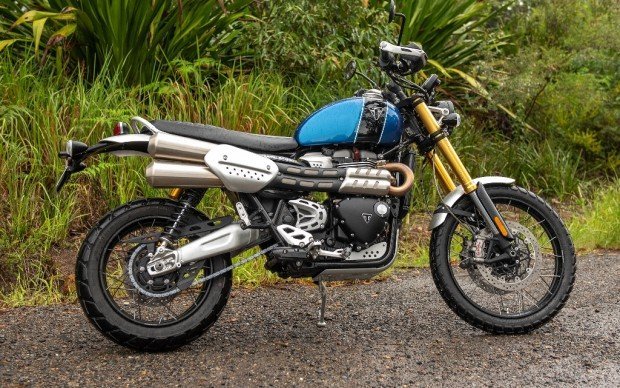 It’s got those long, super-model legs. 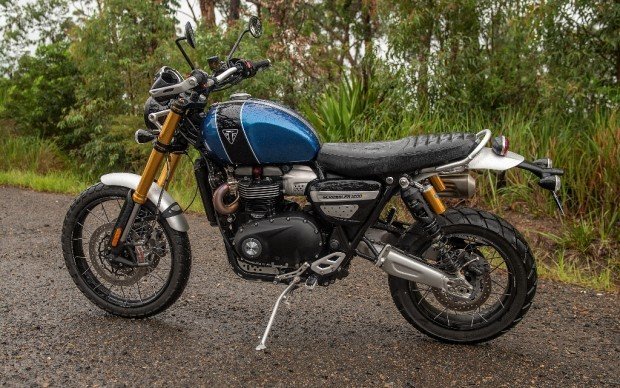 Statement 1: The XC Scrambler is a game-changing motorcycle.

Qualifier 1: It is the only seriously dirt-capable and seriously road-capable “adventure bike” that actually looks like someone put some thought into crucial aesthetics. 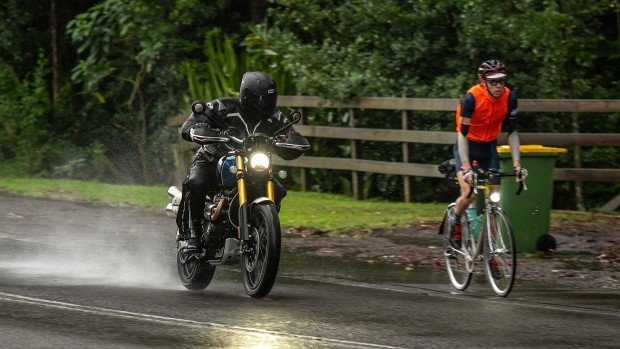 He loved it when he saw me ride past on it. Honest. 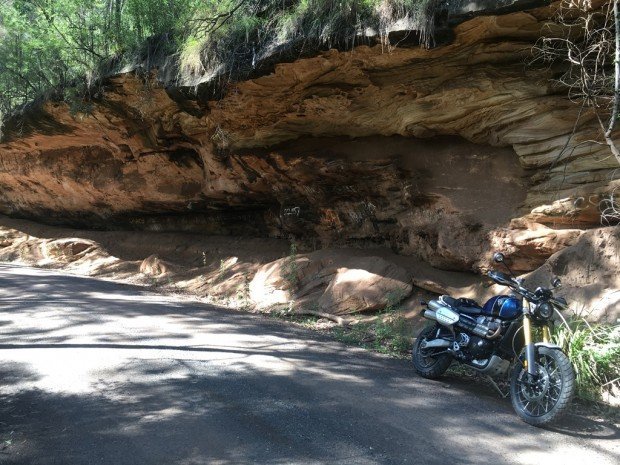 A rock wall I did not hit. Winning!

Qualifier 2: Firstly, I would have thought Triumph might have considered that “XC” sounds exactly like “XE” when you say it out loud. So make sure the salesman hears you’re ordering the XE. 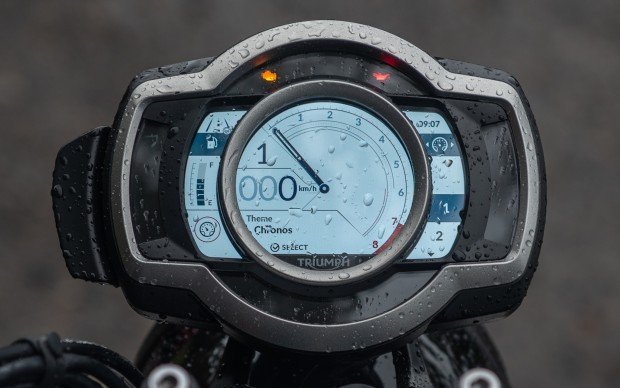 It is most handsome, is it not? 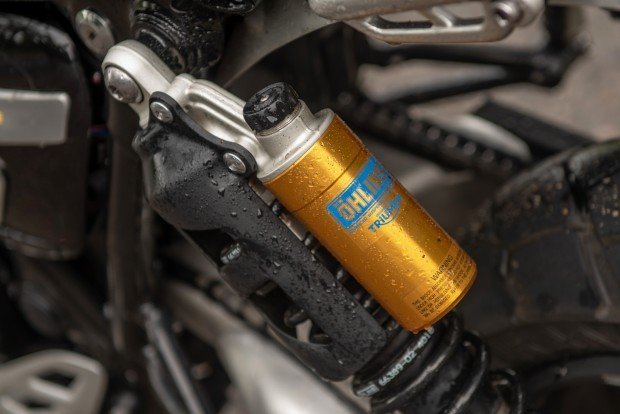 Go for gold, every time.

Statement 3: I would buy this over a BMW GS.

Qualifier 3: At my level of skill, and with the amount of time and grace I spend climbing single-track mountain passes, I’m far better off on a 1982 250 Honda chookie – just so you know.

That said, I had never considered buying a dedicated “Adventure” bike. I’ll ride what I got, to wherever it needs to be ridden, or perish in the attempt.

I also don’t much like the overt, almost elitist wankery that goes with so much of this new wave of Adventure rider thing – basically cashed up greybeards with little skill, less of a clue, but with fully-loaded, uber-equipped bikes poncing about on everything-catered-for “adventures” – which is not at all in the spirit of those two intrepid avatars of off-road glory, Obi Wan and Whatsisname, is it? Shall I turn off the sarcasm now, or have you got it? 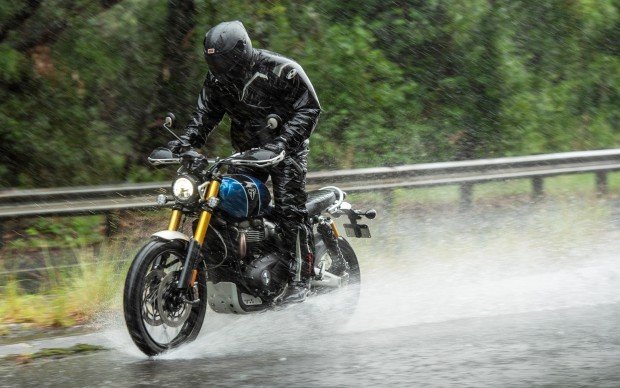 Is the Triumph Scrambler XE a better bike than the BMW GS?

Not on any objective level. The GS is brilliant. The Triumph’s certainly less electronically complex, and normal people will be able to take it everywhere they can imagine they can take a GS. So it’s no less brilliant in my view.

But this is not about which bike is better.

This is about which bike I would buy if I had to choose.

And I would buy the Triumph.

And I would buy the Triumph because it is gorgeous.

It’s one of those rare bikes that pleases they eye from every angle. 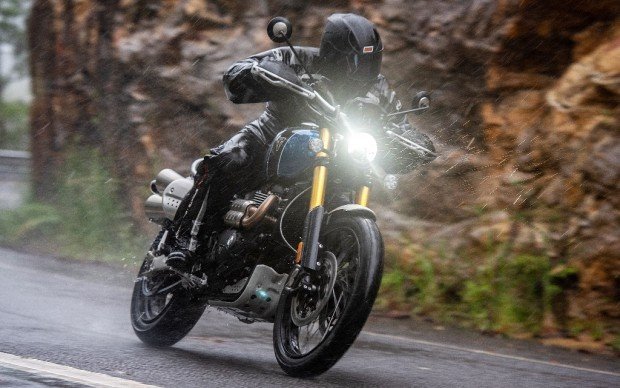 It’s not going to get any wetter today.

Because I am shallow and venal, I think a bike needs to be aesthetically beautiful before I would consider purchasing it. There may well be bikes which are objectively better equipped, more powerful, easier to jump canyons with, or whatever. But if its looks do not delight me, I will always buy the one that looks better. This goes a long way to explain my love for MV Agustas.

Can you still see me over that pile of knotted undergarments? Good. 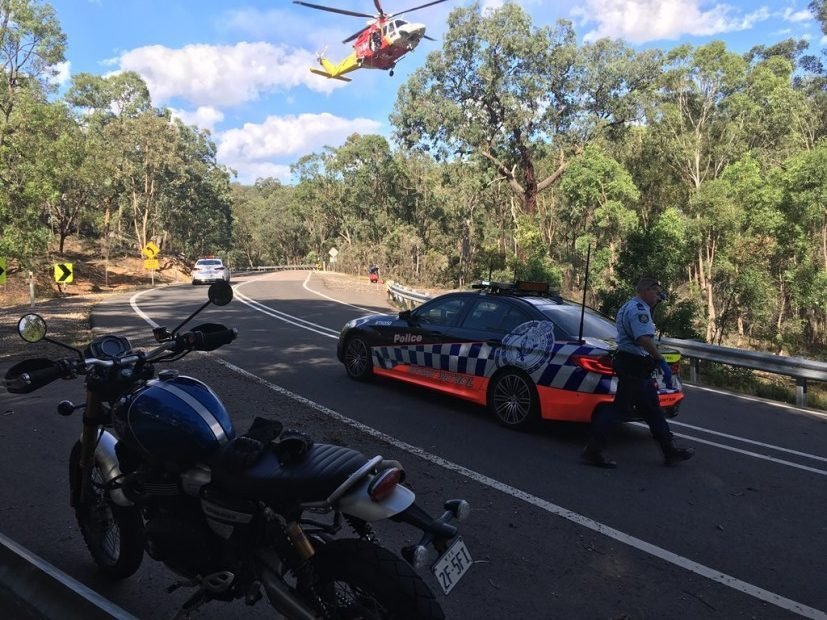 Always be ready to assist the cops by getting out of their way and taking photos of them.

Triumph has, of late, very much upped its game in terms of supplying a premium product to buyers who want such a thing. This is where the XE is pitched.

You want something Triumph that costs less and isn’t as edgy? Go look at the sweet-hearted and gentle 900 Street Scrambler. It’s not got any of the dirt cred the 1200 has, but it’s still got them high-level pipes so you can pretend.

But if you want something that can really do the deed for you, either on the road or in the dirt, the XE stands ready. 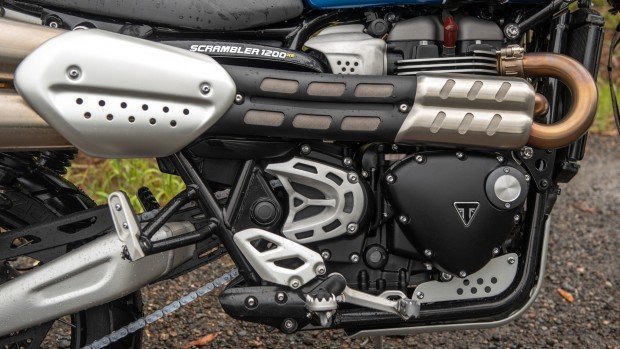 A good deal of thought has gone into the aesthetics here.

I loved the gold forks. They made me feel lairy and sassy. And they are two millimetres fatter than the forks on the XC.

I loved the beautiful seamless 16l tank. It’s an utter miser on juice, too. You will get just over 100km for every five litres of fuel. 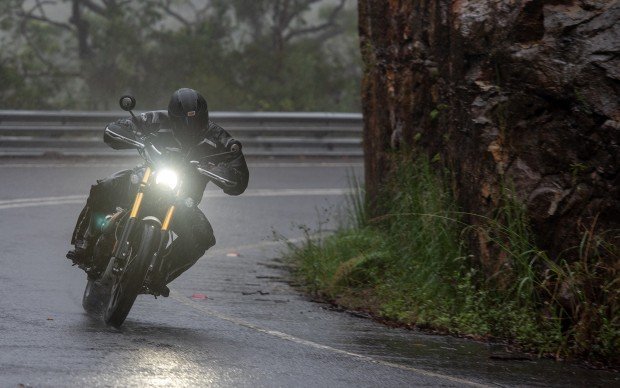 The only thing on my mind is fuel economy.

I loved the way the side-stand was spring-loaded, so when you hooked it with your heel, it would thunk eagerly outwards by itself.

I loved the DRL headlight, the backlit switchgear, and the new second-gen TFT dash. It was also pretty intuitive to navigate through the menus via the joystick-thingie, and that’s important to me. Triumph’s electro-gadgetry has always been easy to use. 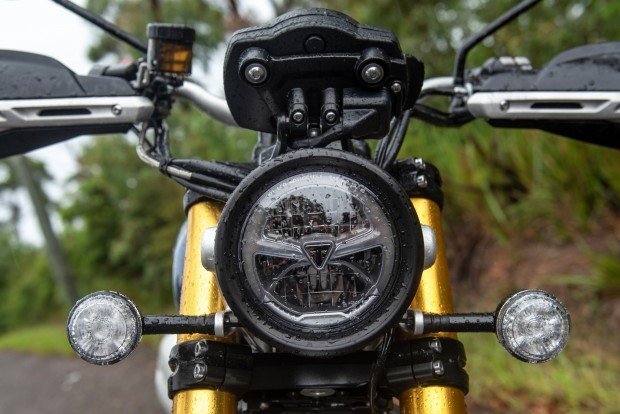 And if you like, you can get the XE fitted with a Bluetooth module with the world’s first integrated GoPro control system, plus turn-by-turn navigation, phone and music. None of that applies to me, but you go your hardest.

I loved the brakes. They bite hard, and they feel and offer feel…well, like Brembos should.

I didn’t quite hate the seat. I felt it could have been more plush, but I’m thinking of going up another 20kgs in my squat regime. So I probably won’t think that in three months.

And I will always have a sheepskin on hand. 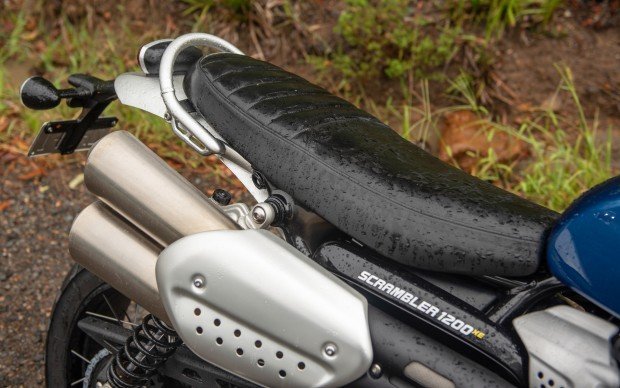 Shut up and do more squats.

I hated the petrol cap. You may not. But I did. I like petrol caps where it’s a one-handed operation: You put the key in, turn it, the cap opens and remains attached to the tank, fuel goes in, the whole show closes, the key comes out, and off you go. Triumph (and a few other manufacturers) complicate this on all of its bikes by making it a two-handed affair. I have no idea why.

But heat-shielding is next level. Things are warm, but even in traffic, I did not find it annoying. I thought I would. But I didn’t. 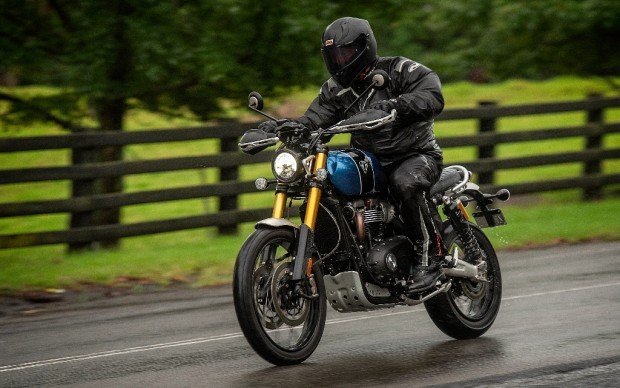 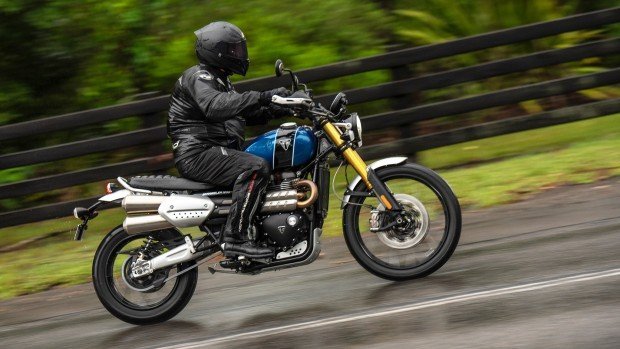 “He’s not even holding his camera anymore…”

On the road, there’s 90-odd horsies stomping out 110Nm of torque just shy of 4000rpm – which is the sweetest sweet spot there is, both on and off the road.

I served the XE up and down the Putty a few times, as well as the Broke-Wollombi road, and I found it flawless on the bitumen despite the 21-inch front. It steers light, it tracks dead true, and the dual-purpose Metzeler Tourances coped amazingly well – especially in the 10-bastard downpour I rode and photographed it in. You really find the worth of a great bike and tyres when there’s water covering the road and a bearded Hebrew is building an ark in his yard. 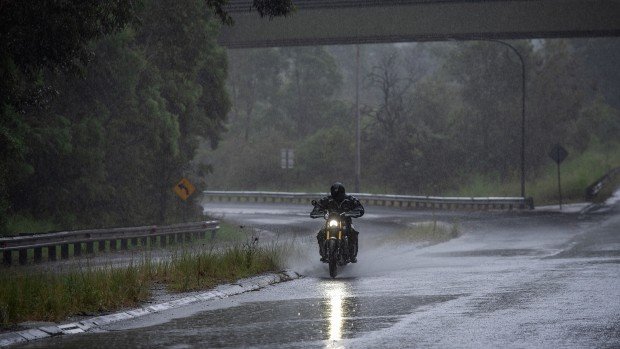 I also took it down about 80km of fire-trail dirt and even had the balls to press the Off-Road mode. This allowed me to have my balls in my mouth and spin a bit of dirt off the rear tyre like Toby Price – except not very much at all like Toby Price. But hand on my heart, it was all so very manageable with the ABS off, even at my very low level of off-road ability. 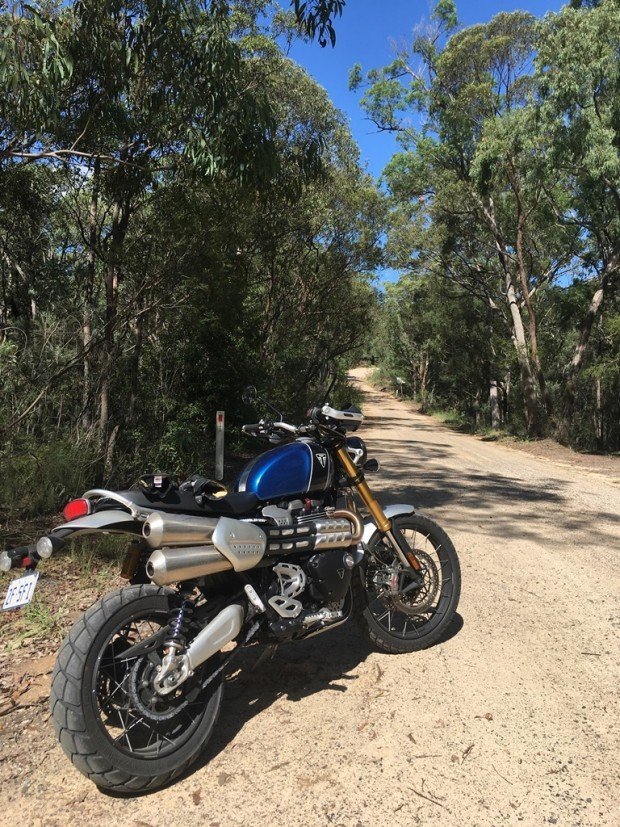 “I’ll probably ride off a cliff if I keep going…”

The Scrambler XE is a great bike. It’s the only adventure bike I would ever consider owning, because it is far more than just a superbly capable off-roader and bitumen corner-carver.

It’s more capable than I’d ever need or want – which is exactly the case for almost all the dedicated adventure rides. They are nearly all better than we are, pilgrims.

What makes this one so different is its looks.

And that’s when I sign on the dotted line.

ALL THE SPECS AND ACCESSORIES CAN BE FOUND HERE 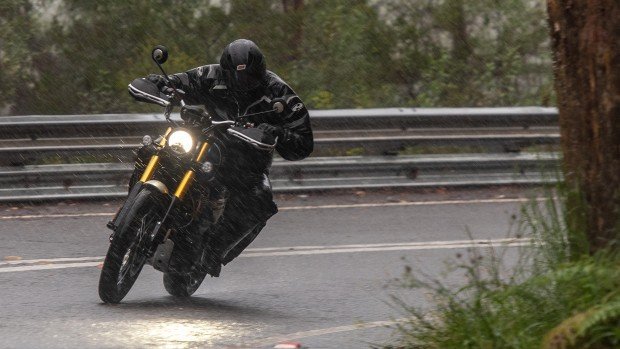