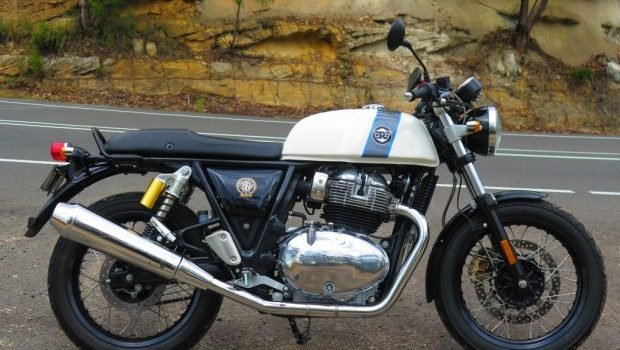 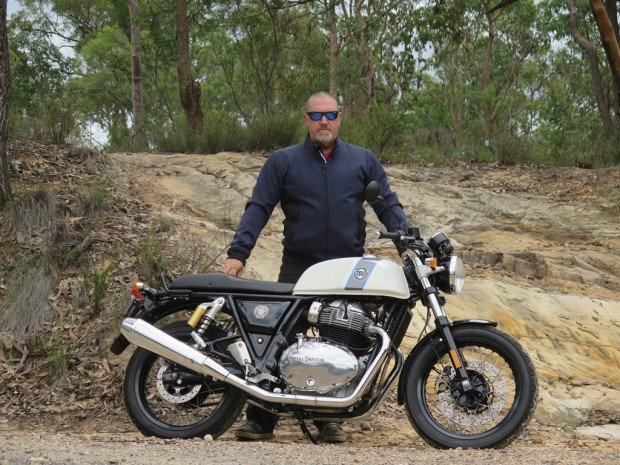 Remember to pile your panties neatly, ladies. It will help you find them when it’s time to go.

I like it very much when a motorcycle company tries. Like, really, really tries when it produces a new model.

It means that company cares.

I’m starting to think Royal Enfield, the company which produces almost a million bikes a year, is now really starting to care about markets outside the developing world.

Markets which are used to (and indeed demand) bikes which are blazingly reliable, relatively great value for money, and offer an excellent turn of performance and ability, ie. great brakes, top-notch handling, an excellent finish, and some longevity. 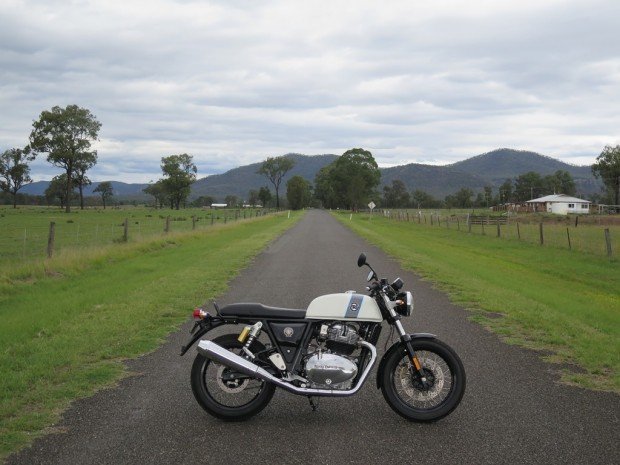 These are known as “mature markets” – and Australia is just such a market. People buying bikes in such markets tend to be rather set in their expectations.

I am sometimes scolded by readers who want to know why I never pan a bike.

These are obviously readers who haven’t been reading my stuff for very long. If a bike deserves panning, then I shall beat it to death with a frypan, and have done so in the past. The manufacturers now know this, and they are careful not to give me bikes which might get the frypan. They give those bikes to media outlets who are beholden to them for advertising and are thus assured of a great review – you all know that. It’s not like you’re dumb. 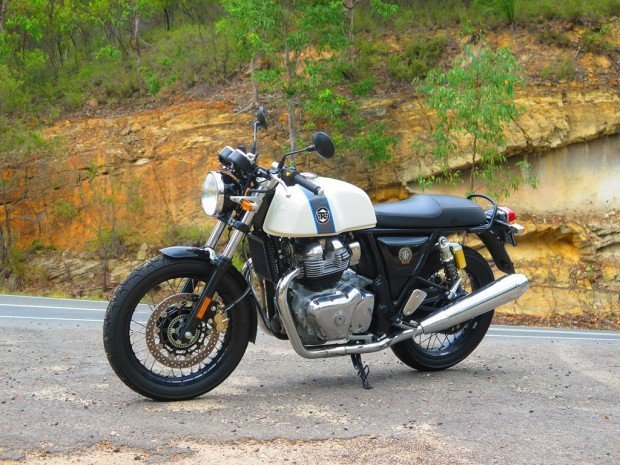 So I do what I do, and I fully expect you to decide who you’re going to believe.

I also understand the difference between critique and criticism – and I am sure you do as well.

One lives in hope the manufacturers also get the distinction.

So when the Royal Enfield’s latest offering to the so-called “mature market” of Australia arrived at my garage, I was fully prepared to critique it until the paint fell off. 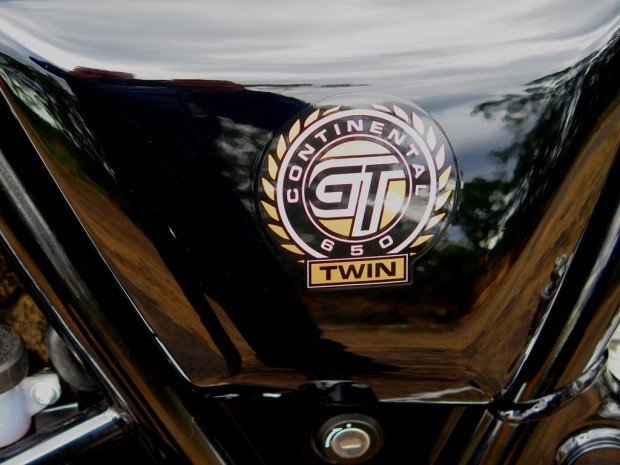 If you unlock the sidecover, it will fall to the ground if you don’t hold it.

It sure was pretty. Like, objectively pretty. Very, very pretty. Its lines were pure and its stance was right. It paid more than lip-service to the classic Brit bikes of yesteryear in its aesthetics…Hell, it really did look the business.

I opened a beer, sat off from it maybe two metres or so, and looked and looked.

I loved the sculpted muscular tank. I far preferred the Continental GT iteration over the more staid-looking Interceptor – and they are identical bikes apart from the cosmetics and slight ergo variations. 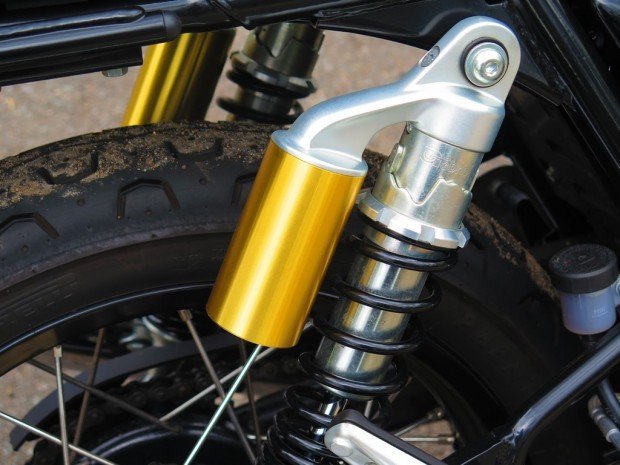 Gabriel shocks are reasonable in their discourse with the road.

The more I looked, the more I thought it looked out of place parked next to my long-term Yamaha Niken, and the Triumph 1200 Scrambler XE – both ultra-modern avatars of motorcycling. The Continental GT looked like it didn’t belong in that company, or indeed this time.

My mind’s eye was seeing it parked outside a dingy inner-city pub in Sydney, the streets slick and reflective with rain, the traffic sparse, the night cool and full of promises for the leather-jacketed blokes smoking on the footpath before getting on their British iron and not going anywhere special, but just going… 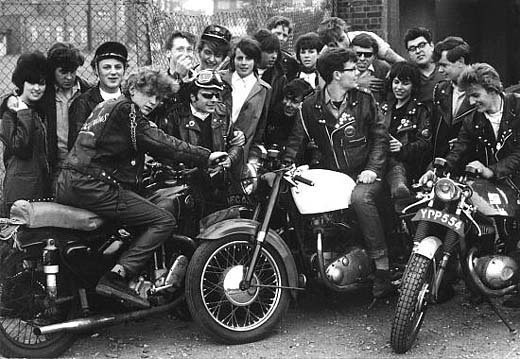 I shook myself out of my imagination, put my beer down and went to sit on the GT.

My initial effort to heave it off the side-stand made me wonder if they’d filled the tank with concrete. I heaved harder and decided it was an ungainly heavy bike to lever off its stand.

I put it back down and peered at it with concern.

Clearly, it was carrying a lot of its 200kg weight somewhat higher than maybe it should. The tank is steel, but the guards are plastic, and at the price-point it lives at, I was pretty sure there wasn’t a lot of titanium, magnesium, carbon-fibre, or super-light alloys used in its construction. 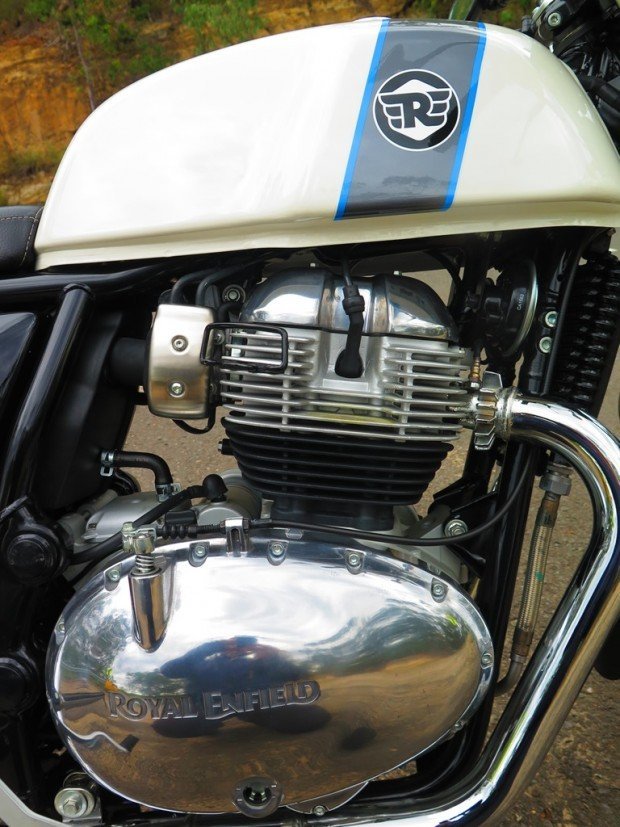 It’s not a bad-looking donk.

I shrugged. I’ve owned Shovelheads. I know what’s what in that regard.

The next day, I fired it up the Putty Road.

I was determined to find fault after fault. How could I not? It’s built in India. It doesn’t cost very much. Previous Royal Enfield’s were hardly the stuff motorcycle dreams were made of. No matter how sassy this one looked, it could hardly be different, right? 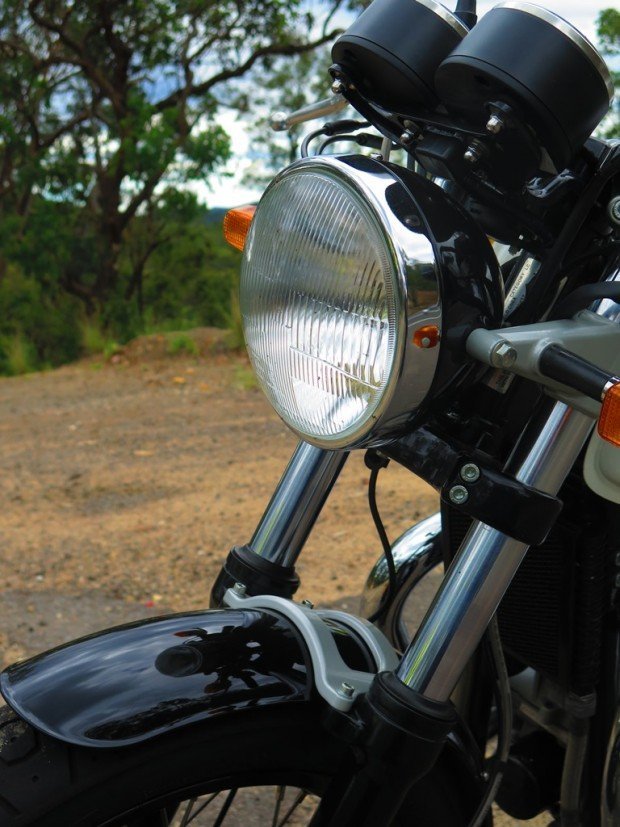 Yeah, you might not want to ride it at night in country areas. It’s fine around town, but.

Not so, friends and relatives.

The Continental GT is quite a step forward for Royal Enfield. The stuff it was building prior to this model (and probably still is for all I know), is not even in the same lunchbox.

Now let us remember this is a LAMs bike. It produces a gentle, law-abiding 47 horses and 52Nm (which peaks at 5250rpm). It is not going to set the world, or your pants, on fire. It also delivers these numbers without any urgency whatsoever. The fuelling is fine and pretty seamless, but if you jam open the throttle, not a lot of anything is going to happen quickly.

I managed to get it to a shade under 170km/h and then my patience ran out. 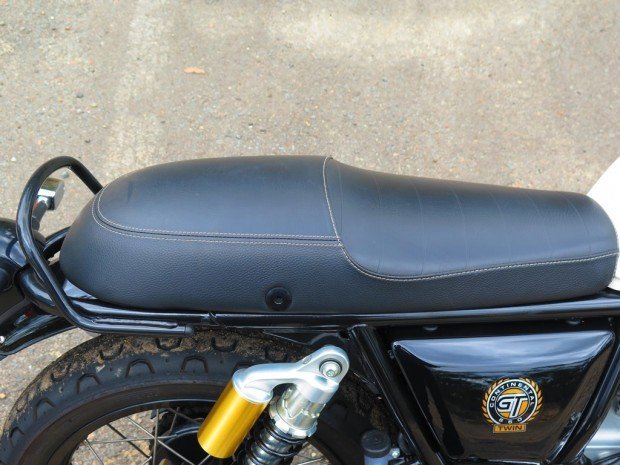 That seat will not permit all that much Grand Turismo. The pillion area is very nice, but.

But you know what? If I was young and easily frightened, but I still wanted a bike that looked hell cool (and with some proper pipes could be made to sound hell cool), was very easy to ride, and whose purchase price meant I could still eat fresh food once a week, I think I could be tempted.

Likewise, if I was old…well, older than I am now…and the parts of my brain which still worked caused me to reminisce about those good old days, and I just wanted an easy chugging, uncomplicated (but still Bosch-made engine management system), easy-to-manoeuvre bike, I could also be tempted. 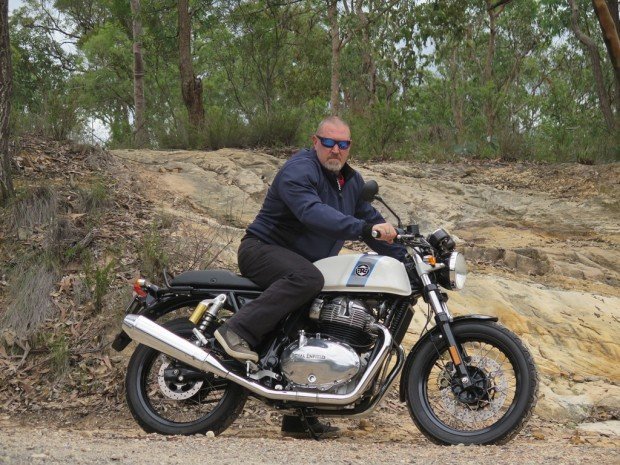 The hole I put in my shin while I was trying to get back to the bike before the self-timer on the camera went off is only now starting to heal.

I rode it up and down the Putty and a few backroads out where I live. I found myself riding much slower than I normally would, and the Royal Enfield seemed happier if I didn’t lash it like rented mule. It tracked well around corners, and the weight I found heaving it off the stand was absent on the move.

If I made the effort (and I did) to up the pace, two things became immediately apparent.

One – it took some time for the pace to be upped. This is a gentle motor.

And Two – this is not the kind of bike that’s gonna drop the red mist into your eyes and light the fires of damnation in your heart. 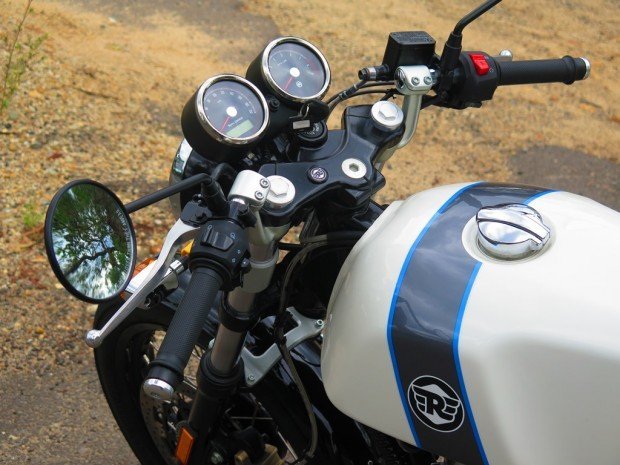 Simplicity itself. Put bar-ends on. Throw the stock mirrors in the bin.

If you try, then it won’t be happy and you will not be happy.

The engine-service intervals are 10,000km apart, and there’s a three-year warranty, in case you’re wondering.

It rides mild and…well, kinda organic with its thrumming twin-cylinder motor. The suspension is average, and coupled with a not-very plush seat, only the truly heroic or deranged will do big miles on it. The gearchange is slick, the lever-pull fair, and it sounds kinda meaty, which means it’s crying out for unrestricted mufflers. 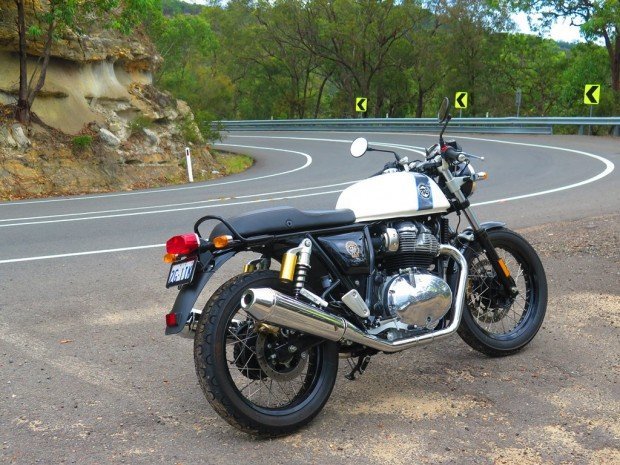 The Pirellis are pretty good. And the ground clearance is spot-on for its ability.

The Bybre front brake (yes, only one twin grabber on a 320mm disc), and the rear unit are a bit wooden, but they do the job. You’re not decelerating from 200 here. Ever.

Of course, a man has to wonder what would happen if that nice steel-cradle frame was treated to some serious shocks, and that stolid Bessie-like motor had some devil pushed into it.

You might wonder that too when you learn how much the bike costs.

The switch gear is bargain-basement as are the mirrors, which provide that wonderful wave effect at the edges I haven’t seen since the last Hyosung I tested many years back.

To offset that, the alloy looks top-shelf – and there’s lots of it all waiting for you to buy crates of Autosol to rub into it.

Nothing feels cutting-edge, or high-tech about it, but then nothing should, I guess. 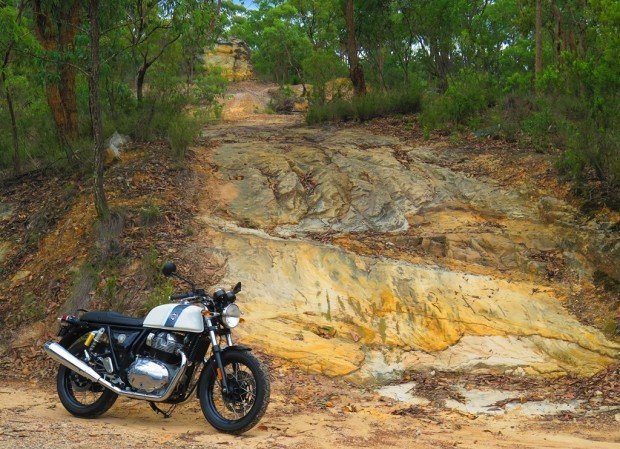 Once again, it’s certainly no pub. But it is rich with texture.

Of course, the success of these new Royal Enfields will depend a lot on how well they cope with Australian conditions and roads, and how well (or poorly) they age.

I think they are better than everything Royal Enfield has built in the past – and in all honesty, some of that was pretty woeful.

The company is not at all unaware of this and has invested a lot of time and effort, and R&D, into both the Interceptor and the Continental GT.

I look at them both as a solid first step in the right direction. It is, after all, 2019, and I’m thinking that Royal Enfield’s already long journey has actually only just begun in our market.

The Continental GT was, at the end of the day, an altogether surprising bike for me.

I was resigned to belting it with the frying pan, but it just didn’t deserve that.

It is an honest and serious effort by a company just finding its way into a very demanding and fussy market, and as such, there’s nothing ‘wrong’, per se, with the Continental GT.

There is, conversely and surprisingly, a lot right with it.

And that rightness, is naturally informed by the price – and that is $8640, plus ORC.

One cannot say fairer than that.

ALL THE TECH SPECS CAN BE FOUND HERE

Why are there no pics of me riding it?

Well, quite simply, Nick Edards was off shooting race bikes, or bats, or his terrible holidaying feet annoying palm trees, or some such important stuff, so I was left to my own devices.