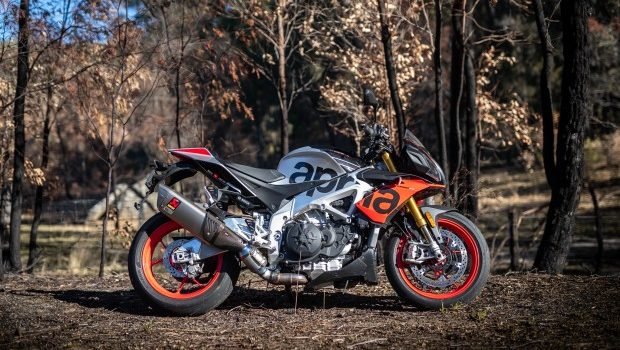 The latest incarnation of the Tuono Factory is a stunning motorcycle. Objectively, subjectively – hell, any damn jectively you like. It’s just sublime.

I first rode it at Sydney Motorsport Park (SMP) a while back during the press launch. At the end of the day, I had completed more laps faster than I had ever done at SMP. I was captivated by the bike. If you’re interested, you can read about that experience HERE. 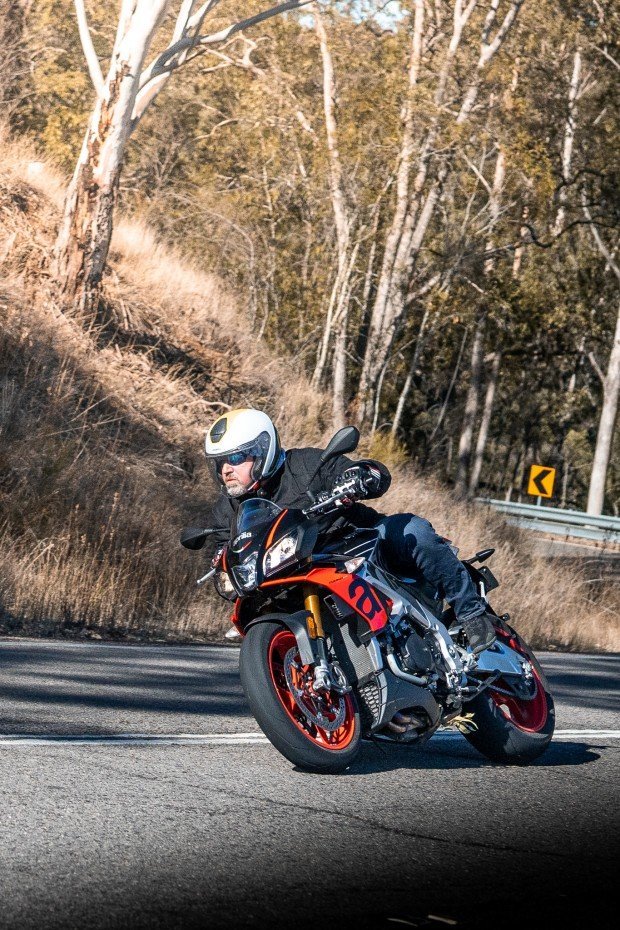 I have ridden this corner 3,554 times. Yes, I have been counting.

But racetracks are racetracks. Smooth, predictable, and when you’ve reached the limits of your kung-fu, pretty same-same every lap.

The road is a different place. Especially the roads I ride thesedays. The surfaces are ever-changing. The conditions can vary from morning to afternoon. Animals, lunatics, and werewolves may appear upon the instant and change your world. You can go very fast in relative safety on a racetrack. You wanna go very fast on the road, you’ve bought a ticket to a different ride. 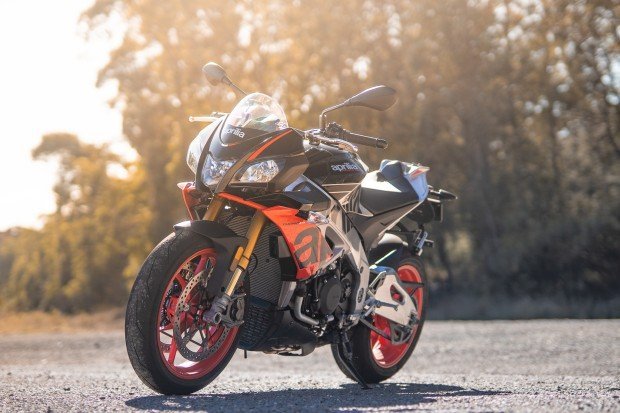 I have always liked how Aprilia paints its bikes up like showgirls.

But the Tuono Factory is all about that ride. It is the most complete and sorted naked bike I have ridden thus far. It is the Wrath of God. And because it is that, it is, to my mind, the best naked bike in the world at this point in time. Yes, there is competition coming. But right now, this is my King Daddy.

I thought it was great on the track. It was even better on the road. And what makes it so good is the suspension. It is possessed of the next-gen Bosch electronic wizardry, which acts in a predictive fashion, preparing for the next ‘event’ you’re going to encounter. I go into some detail in the linked yarn above, so I’m not going to repeat myself. 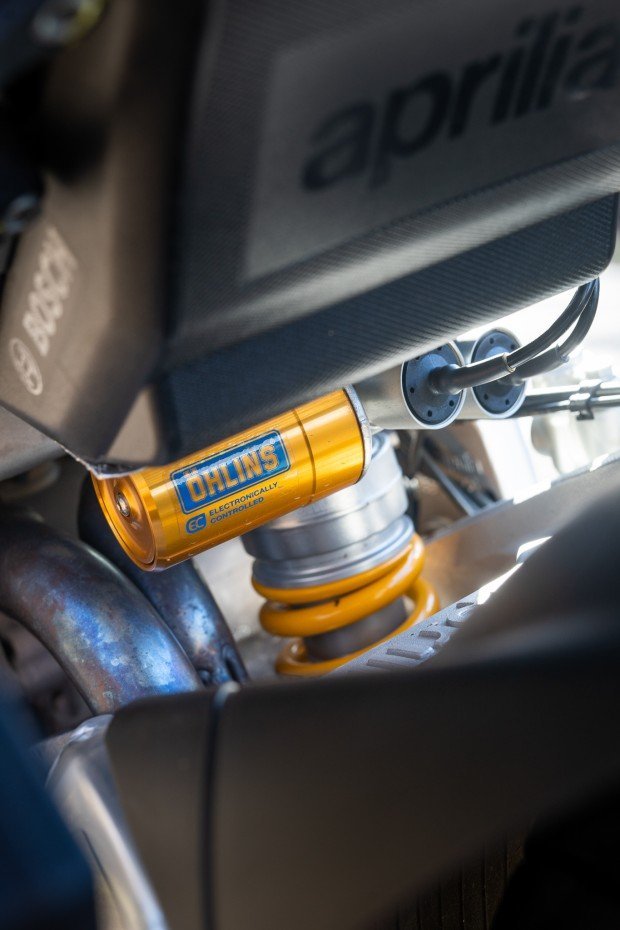 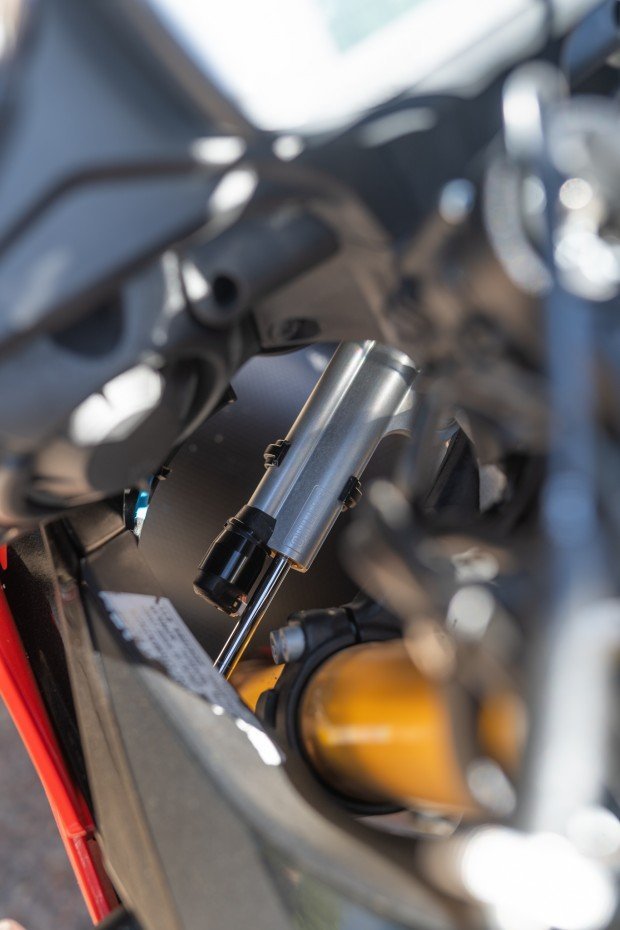 Another tube full of magic.

And it really doesn’t matter. I’m not the kind of bloke who cares how sausages are made. Only that they are delicious to eat.

So while the bare numbers are as impressive as you’d think – 175 horses, 121Nm and a 209kg wet-weight – none of that means anything unless the suspension knows what it’s doing. And the Tuono’s certainly does. The very shortest of rides will convince you of this. I smashed it up and down Mother Putty a few times, as well as the Wollombi Road, with it’s terrible between-bridges section, and nothing I have ridden has done it with more…well, élan, than the Tuono. 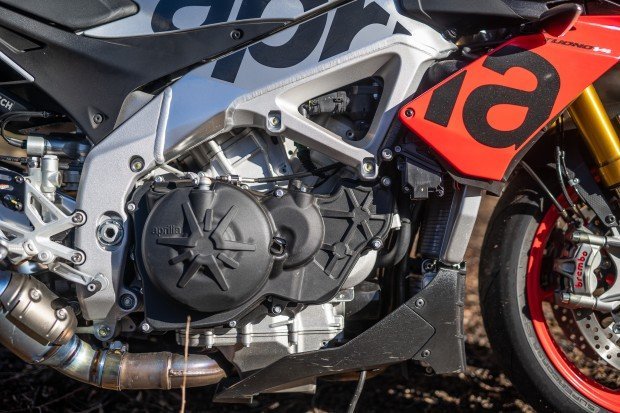 It’s not so much an engine as it is an act of war.

You know there’s something otherworldly going on when you come rocketing into a broken-surfaced, crap-narrow bend, too scared to look at the speedo because you know what you’ll see will horrify you. You’re grabbing brakes (but not too much lest that go into the shape of a pear), the motor’s barking thunder, the perfect quickshifter’s sorting your gear-selection (sometimes it’s too terrifying to reach for the clutch), and you’re hoping those magical Pirellis remain magical – and then suddenly you’re through and quickshifting up the gears as if nothing much at all as happened. The Tuono is so divinely unflappable in those wondrous moments. 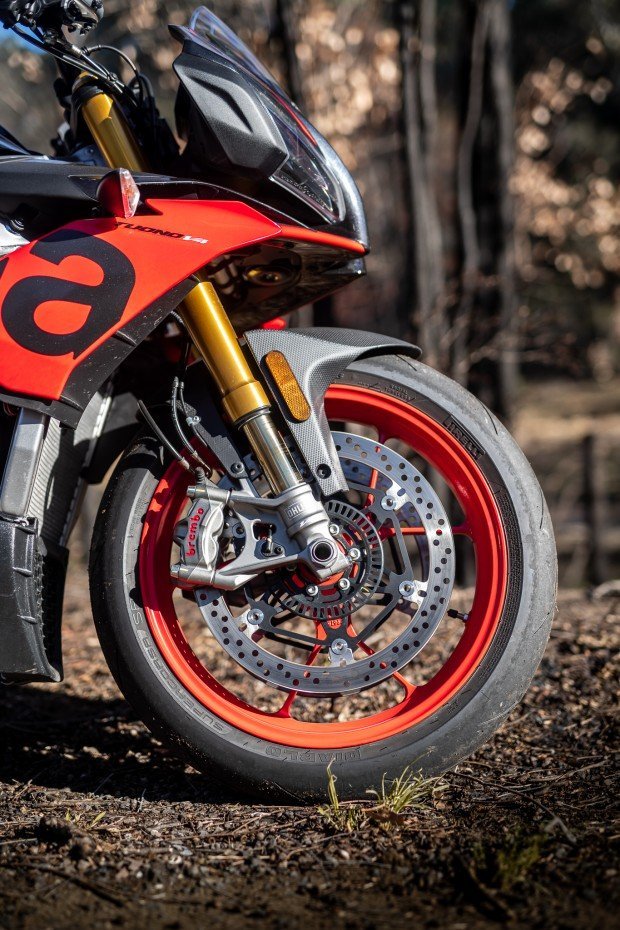 Harley has yet to fit these on any of its performance models.

But when the road is good, and you’re stringing bends together like some mad old woman plaiting her macramé knots, then it’s a holy thing. The Tuono factory is possessed of one of the greatest engines ever wedged into a bike. That 65-degree V4 is for sure some devil-sex magic. It sounds volcanic. On the gas hard or coming off the gas hard, it grumbles and rumbles like a granite landslide. I found myself quickshifting the gears even when there was no need, just to listen to it bark. Yes, I am cussed like that. But you’ll do it too. 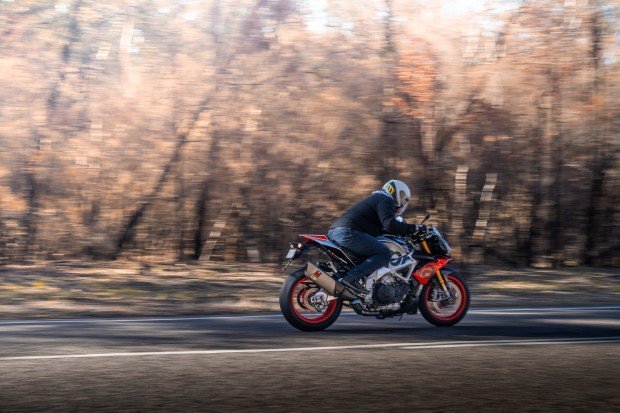 This is a motorcycle package that, thanks to its suspension, touches a new peak of rider enjoyment.

It is far more capable than me, and always will be. But so what? Most everyone who rides, rides stuff more capable than they are. Few of us breathe rarified racer-air. No-one I know has ever given a shit what a racer or former racer thinks of a bike. Those blokes are a different white meat to us. And they don’t road-ride all that much. 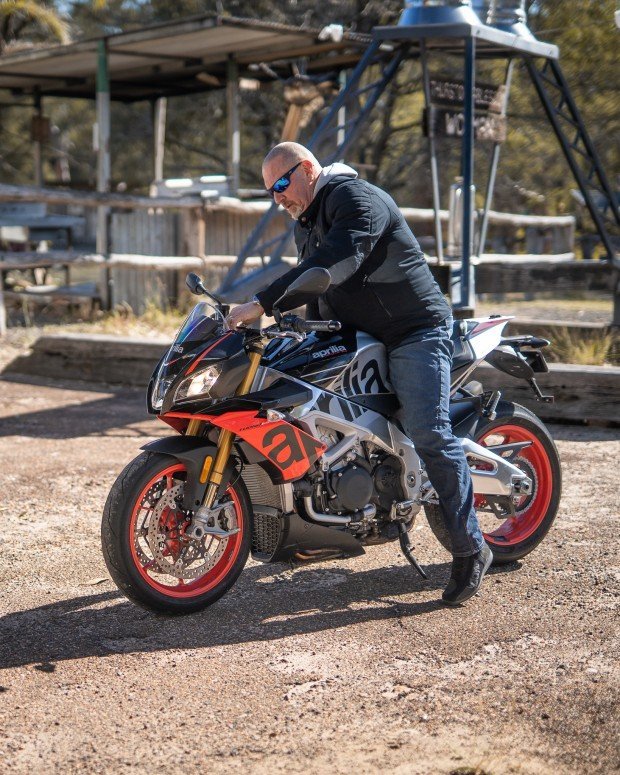 Do I want to know what that button does?

What I want to know is what will this bike, in this case the Tuono Factory, do for me? How will it make me feel? How will it respond to my Mr Average inputs and failings? If I lift my game, will it rise to meet it? If I ask a dumb question of it, will it forgive me my trespasses? 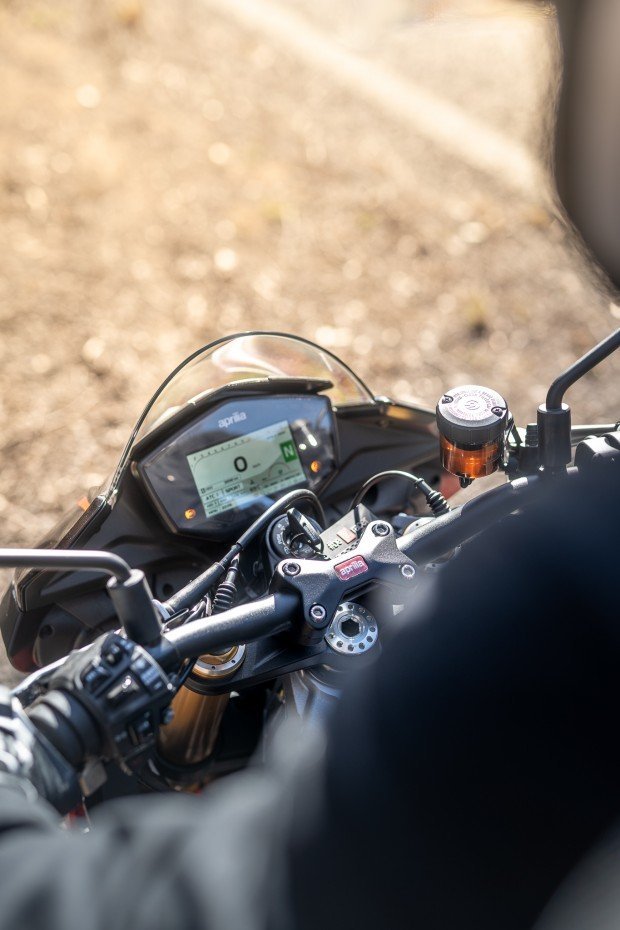 There’s a lean-angle indicator in there. Don’t stare at it while you’re riding. Download the Aprilia App and impress your girlfriend like that. 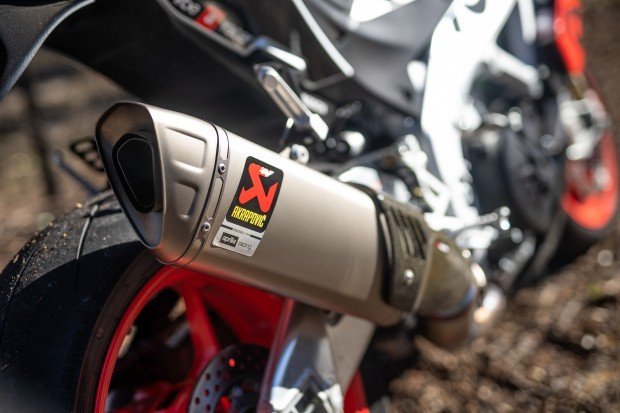 It sounded great…but I have heard them with stumpier pipes and they sound greater.

Let me answer those questions.
The Tuono Factory made me feel like a goddamn superstar. People who looked at me knew I was a man of unsurpassed greatness because I rode a Tuono Factory. It responded to me as if we’d been friends forever – pleasing and delighting me every time I rode it. I even loved the way it barked itself into savage life each time I hit the starter button. When I found myself feeling fruity and heroic, the Tuono simply offered its compliments and complied. The more lemony I got, the more salmony it got. We complemented each other like good whiskey and age. 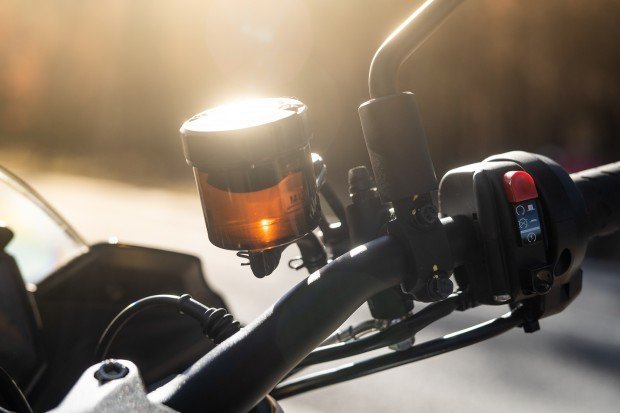 See how it absorbs power from the sun?

I ain’t that fast a rider. But I’m at peace with that. The point here is you don’t have to be Iannone to make the Tuono thunder. But when you do, you’ll think you are.

It’s comfortable – being all upright ergos with wide bars, and the million menus and options are next-level adjustable (why the hell wouldn’t you want 21 settings for your steering damper?), and relatively easy to change once you get the hang of it. 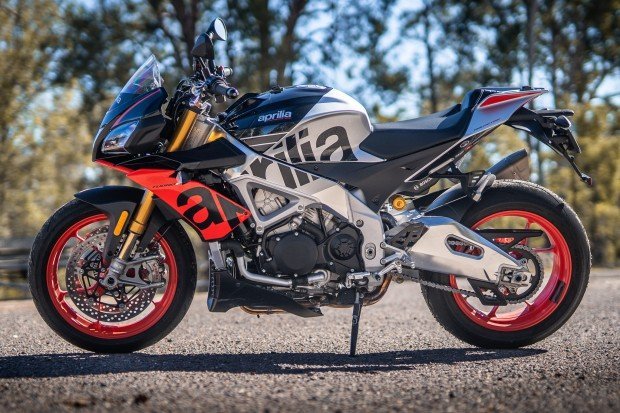 Look at that swingarm. There’s so much of it.

What will people who purse their lips about such a desirably extravagant $27,190 (plus on-roads) sex-machine complain about?

The price. Go shop at Aldi, povo swine. The Wrath of God has no price. 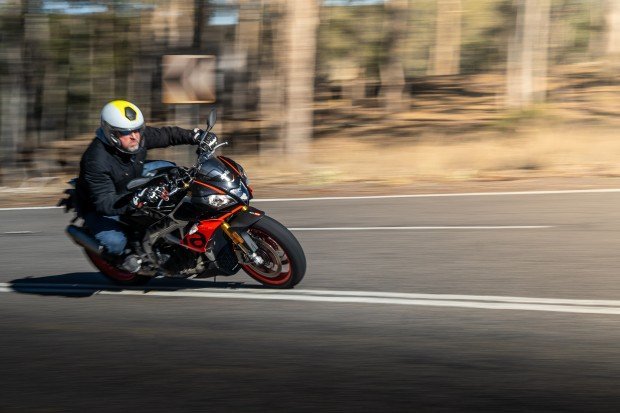 Planning corners is for amateurs.

It’s thirsty. Like seriously thirsty. I don’t care. We got lots of dinosaurs left and I’d only gamble the money away or spend it on hookers. It’s best in my petrol tank. Yeah, let me know if you get 200km out of it. I’ll know you’re not enjoying yourself.

The mirrors are vaguely useful, or maybe my arms are too big. Don’t care. You’ll see the red-and-blue lights when you need to see them, and curls get the girls. 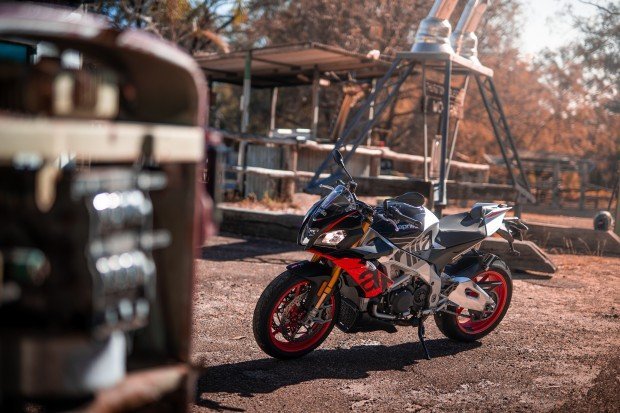 The crazy man who lives here didn’t come out.

There’s nowhere to put a pillion. Don’t care about that, either. That fluted tail-piece is Italian art. Putting a pillion seat on would only encourage screaming and detract from the aesthetics. Catch a cab, sweetie.
The horn is rubbish and the headlight is reasonable, but none of those are deal-breakers for me.

If any of this bothers you, shop elsewhere. Feed at the bottom of the river. Purse your thin damn lips in condemnation.

The Tuono Factory is not for you.