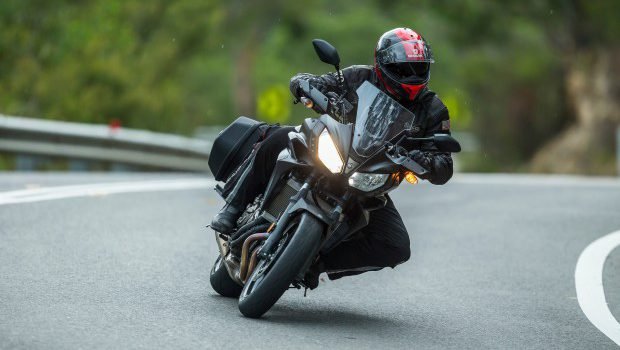 I believe Yamaha has solved a huge problem with the introduction of its new LAMs-friendly MT-07 Tracer.

The problem, as I see it, is that LAMs riders don’t actually ride any proper distances. They may ride every day (and they should), but not many of them load up their bikes and set out to explore this continent. They do not tour. They should, because only by touring can you truly drink from the deep well of motorcycling, but they don’t. 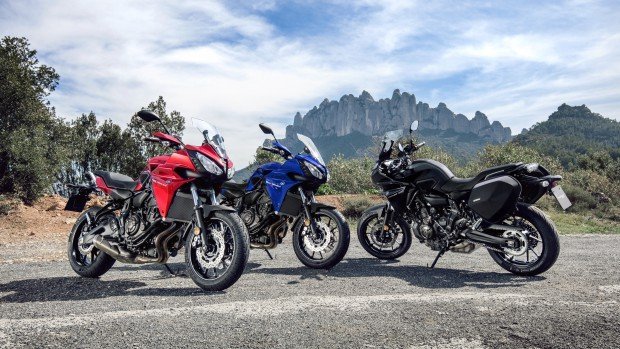 There could be a few half-baked reasons for this…

Reason 1. Riding from Sydney to Darwin on most LAMs bikes will render the rider insane, he will kill himself with a rock and be eaten by buzzards even before he makes it to Broken Hill.

Reason 2. It’s not easy to carry gear on a LAMs bike, and this may prove discouraging to L-platers. Mastering the art of the Ocky Strap is not for everyone.

Reason 3. No-one under the age of 20 believes there is WiFi and Internet once you leave a major capital city. 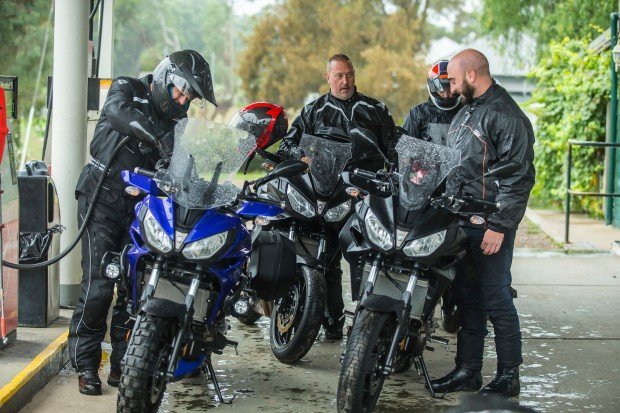 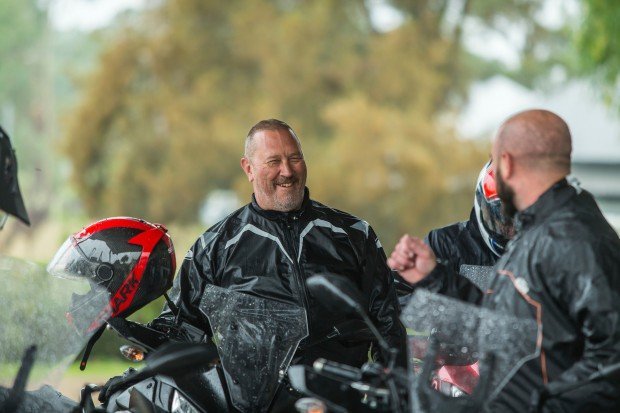 “And mine is the only wet weather gear that works? Heh, heh, heh…”

So L-platers tend to hang around the city. If they venture out of the CBD, then it’s just to ride the heavily-policed and traffic-rich popular bike roads, like the Old Pacific Highway, or the Black Spur, and that then becomes the sum-total of their motorcycling life. 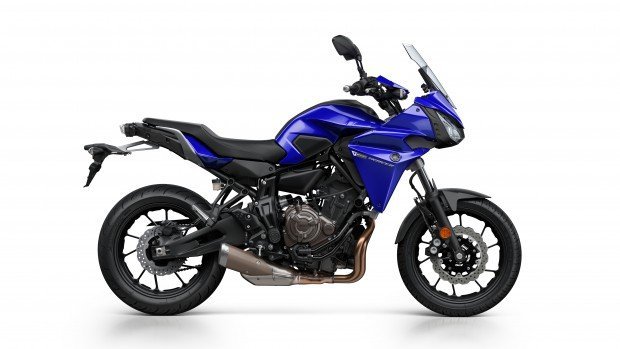 This is it without the easy-on-easy off panniers, which come standard with the bike. 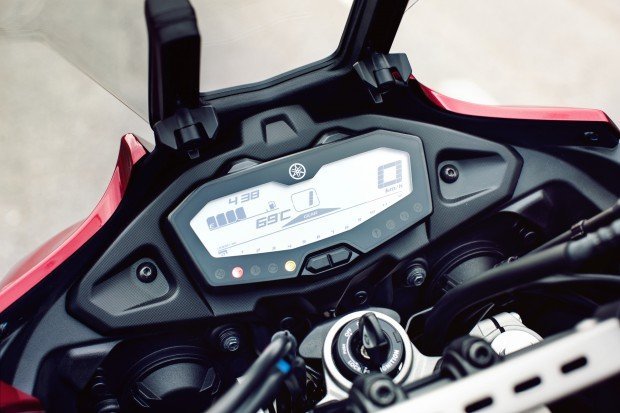 Simple, easy-to-read. Those black knobs adjust the windscreen. Oh, you want an electric one? Buy the FJR1300.

But with the advent of Yamaha’s new Tracer 700, L-platers now have a viable touring bike.

Here is the very popular and able LAMs MT-07, but re-jigged for its new touring purpose with a bigger 17-litre tank (that’s three more than before), an adjustable screen, semi-soft panniers, hand-guards, re-worked suspension settings, different handlebars and risers, and a 50mm-longer swingarm. So it’s longer and thus more stable at speed, has a higher seat height (835mm from 805mm) and longer-travel suspension (142mm from 130mm). And it’s about 14kg heavier.

Yamaha also provided an up-spec “Australian” version of the Tracer for us to try on the press launch. This came with dual-purpose tyres, a bigger screen, crash-bars, driving lights and a beaut-sounding Akro pipe. And that’s just a few of the factory accessories Yamaha has made available for the model. 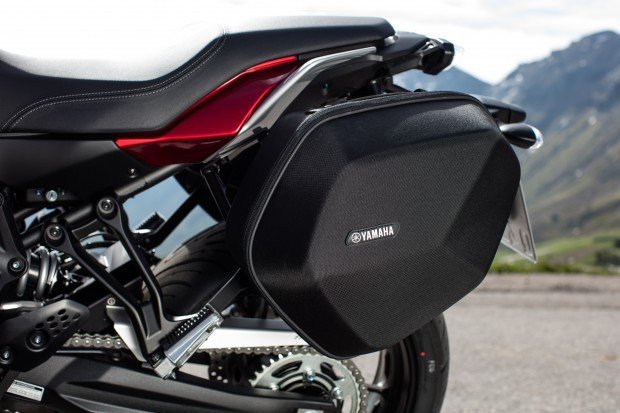 No, you can’t quite fit a full-face into there, unless you cut off the chin-piece. But you can fit lots of jumpers, underpants, tyre-repair kits, and Smartphone cables in there. And there’s even one on the other side!

A fuel-range of more than 300km to the tank shows just how seriously.

So does it tick the touring boxes it has to tick?

The ergos are spot-on. You’re canted slightly forward, but still upright enough for all-day banging. I would have liked a more comfortable seat for big miles, but then I don’t have 20-year-old buttocks anymore. 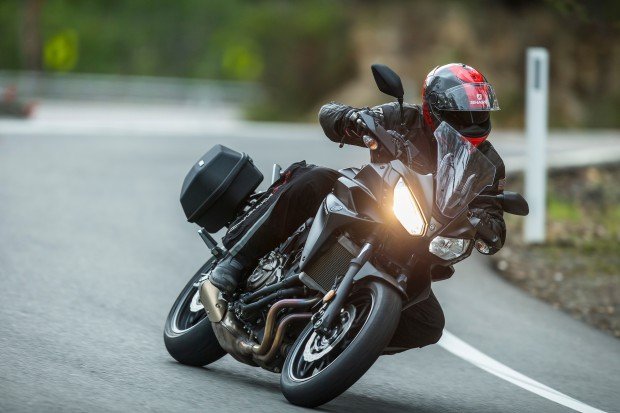 I have one of my non-20-year-old buttocks off the seat.

The motor is a delight. Smooth and torquey and true to the MT credo of bathing you in useable power. And while it’s a LAMs bike, it’s still good for about 170km/h. Trust me on this. 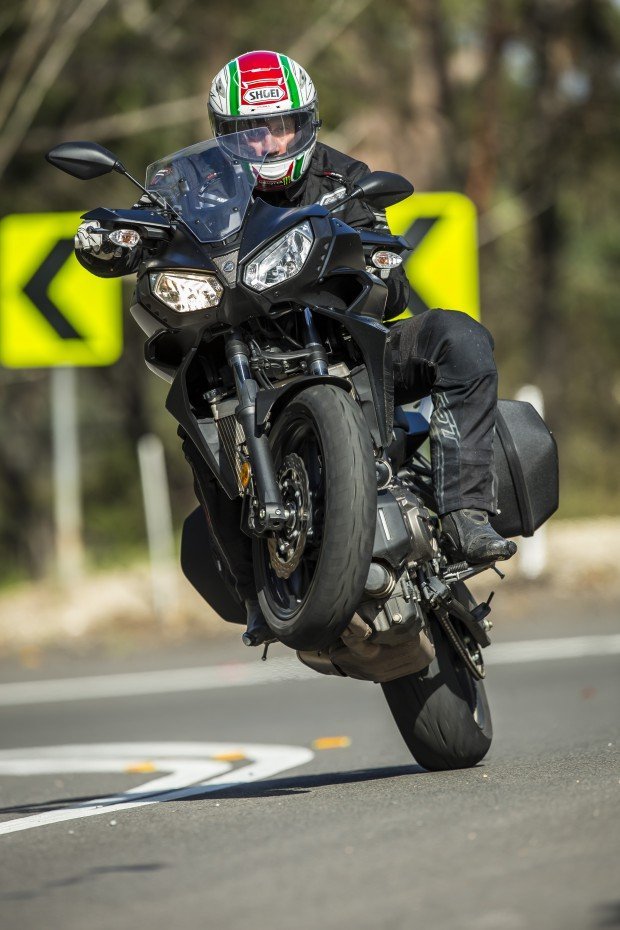 This is Steve Martin on a LAMs bike. You too can be like Steve. 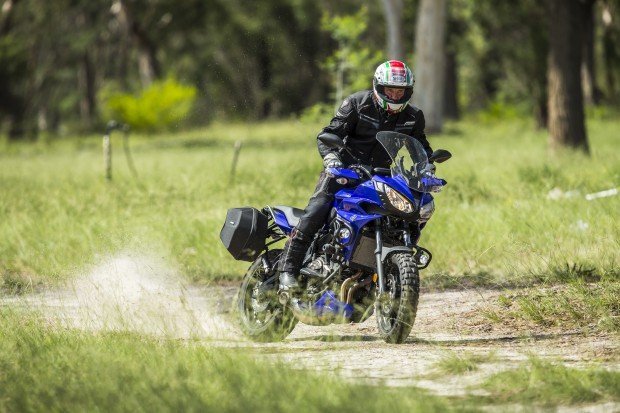 Mr Martin puts the up-specced Australian version of the Tracer 700 through its paces with a view of maybe doing Dakar next year.

The bike is light and a lot of fun to hurl into corners – even if you’re not very good at that in your early years. Understand that it is precisely bikes like this, bikes that have excellent chassis integrity and are designed to handle without surprises, are precisely the kind of bikes that will, eventually, make you better at corners. And then you can go and buy an R1.

But until that happens, the Tracer 700 is a great way to make your bones. It’s a proper motorcycle and it behaves like a proper motorcycle. And to be perfectly honest, once again, Yamaha is offering a lot of motorcycle for not a lot of money, and this new Tracer comes standard with stuff you just won’t find on any other LAMs bike. 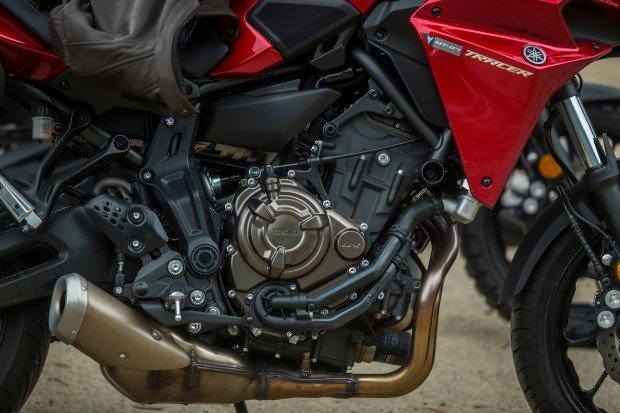 And it’s pure Yamaha. You’re not going to have any issues getting it off the line – it’s fully sorted in that regard. And yes, you can learn how to do wheelies on it. The clutch is light, the throttle response is spot-on, and the fueling…well, it’s a Yamaha, isn’t it? All of its stuff works like it’s supposed to.

This is a hugely comforting thing for L-platers. Setting off on a long ride and wondering if your bike is going to make it, or whether some banjo-player is going to wife you up in Nymboida, can be off-putting.

So while I do recommend the school of Hard Knocks and will entreat L-platers to buy an Ironhead Sportser to tour on, I understand modern young people see the world through a different and altogether more benevolent prism.

Cast-iron reliability is not to be sneezed at. So I don’t. 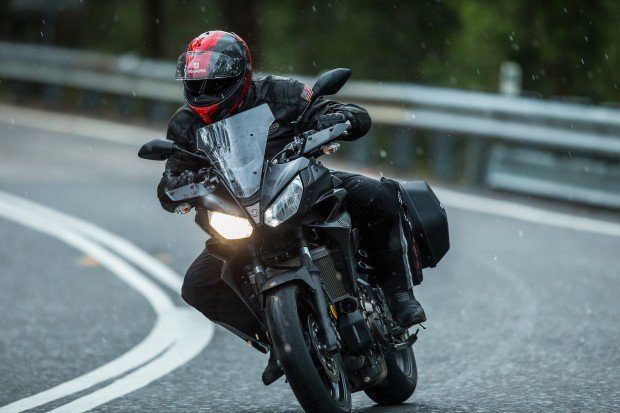 And then the rain came down…

The press launch itself, was a mixed bag of happiness.

Our route was the Putty Road to the Hunter Valley, whereupon we would hand over the bikes to journos from Melbourne and New Zealand, who would ride the bikes back to Sydney.

All equal and all happy – apart from the fact that the trip from Sydney to the Hunter Valley for the Sydney contingent involved riding through a Biblical downpour for most of the Putty.

Which was fine, because I got to try the bike out in the pouring rain – which is always a great way to find out just how user-friendly the package is.

Do you know what? Not one bad moment. It did not put a Michelin Pilot Road tyre wrong. If I stayed smooth, it stayed smooth. We were smooth together. Once again, L-platers will be rewarded with a confidence-inspiring motorcycle, even if Global warming dictates we are to grow gills at some stage. 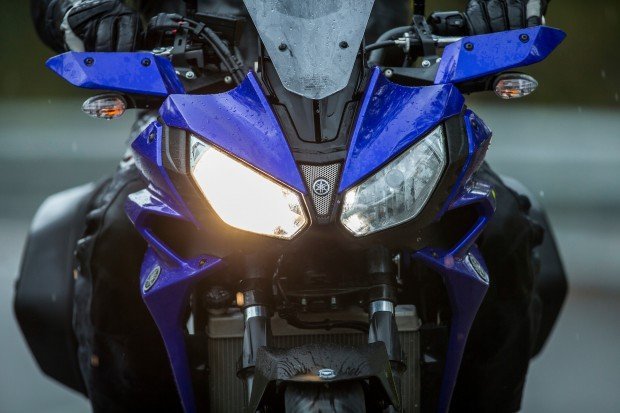 One for low-beam, two for high-beam. 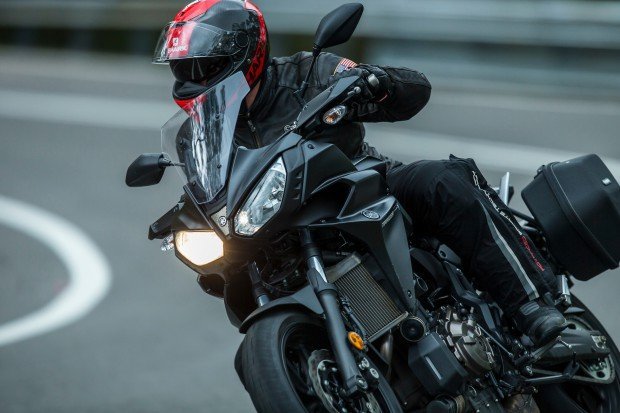 Off to find other leathery tattooed men to drink with and then buy rum for young girls.

So yeah. A viable and competent touring bike for L-platers. There is now no excuse you can make for not doing the miles and seeing the sights. You can carry stuff, you can bolt your Smartphone to the handlebars via that clever little piece of drilled metal across the front, you have brakes that work, a gearbox that forgives you, and a genuine grown-up motorcycle that will only add to the credibility you must achieve if you’re ever going to drink beer and exchange stories of daring and devilry with leathery, tattooed men who will not think twice about filling your girlfriend with overproof rum and watching her dance on tables.

Now I will never be able to escape the L-platers. 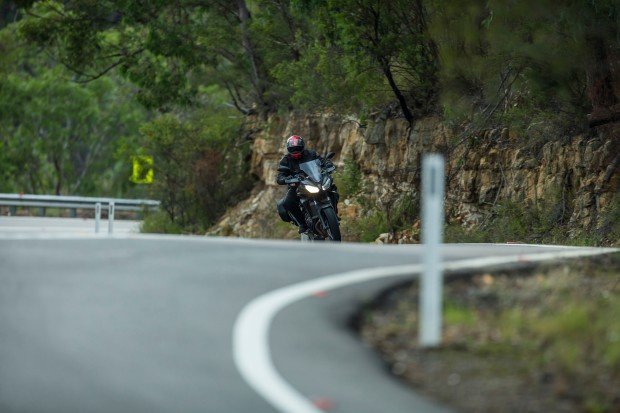 WHAT COLOURS DOES IT COME IN?
Radical Red, Tech Black or Yamaha Blue

WHAT IF IT BLOWS UP?
Warranty: Two-year/unlimited kilometres