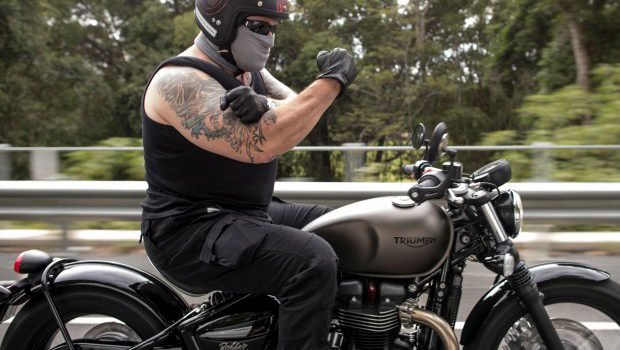 When I first saw pictures of the Bobber, I went “Yeah…nah…” in my head. That’s just not going to work as a motorcycle, I figured.

The last time a motorcycle manufacturer  adopted style over substance and tried to make a bike look like a rigid and still have suspension, we ended up with the Harley-Davidson Softail. Every corner became an adventure, every bend a challenge and each bump a clunk-fest of surrender.

How was this going to be any different? 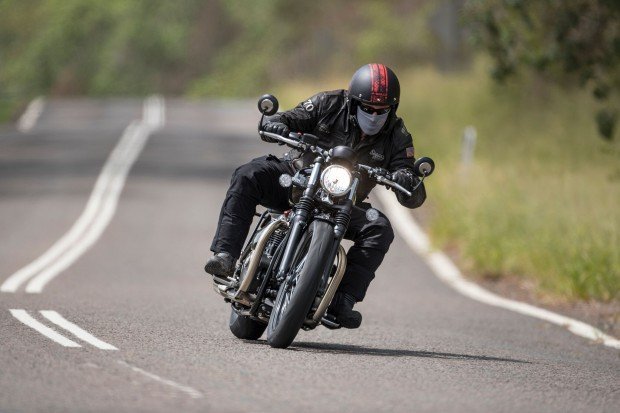 These are the best bar-end mirrors on earth. They do not vibrate. And I am coming for the women in your village.

The horizontal monoshock was visible under the seat – and the seat itself was suspended on a beam of handsome aluminium and seemed to hang in space – just waiting to destroy your spine.

Or so I thought.

Still, because I am a hoary old bison with some weather on my leather, I did very much like what was going on here aesthetically. The T120 Bobber certainly looked the minimalist Bobbery business. It reminded me of glory days and crazy, endless nights – nights I had left far behind me, but which still informed every aspect of my life. You can’t escape or deny your past. You can only make a strange peace with it.

In 2017, I was at peace with my past. But because of this past, I beheld the Bobber with a weird mixture of both cynicism and delight. And I was conflicted. 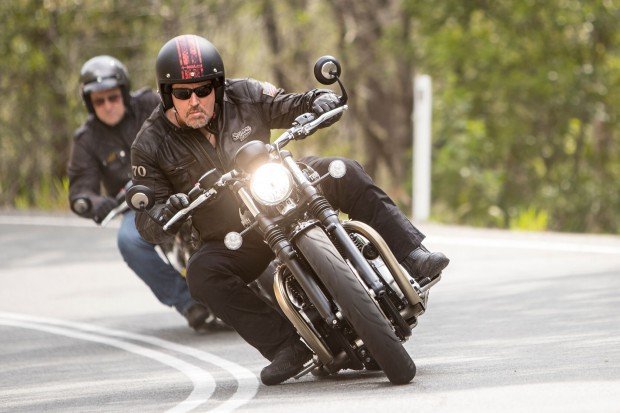 In no way could this bike be compared to the lunatic garbage my friends and I were building and riding in the late 70s and 80s. Or could it?

The overall finish was next-level stuff and, once again, it was obvious Triumph was trying very hard and taking its Modern Classic range very seriously.
The 120 platform has spawned the delightful Bonneville (I reviewed that HERE) and the staggeringly special Thruxton R (you may see my puddles of drool HERE), and the Bobber was the latest iteration in the range. And certainly the most radical in terms of style.

But would it work? Could the Bobber actually be ridden by a motorcyclist rather than just ‘enjoyed’ by a pasty style-icon in a $400 flannel shirt and girl-jeans?

This is what was chewing on me. Had Triumph now jumped the shark, and forsaken motorcyclists to pander to bearded women?

The short answer to that is no.

The Bobber is Triumph’s power play against the Indian Scout, Harley Sportster and maybe even some of Milwaukee’s other Big Twins, like the aforementioned Softail.

While it boasts the ‘same’ 1200cc engine as the Bonneville and the Thruxton, and the numbers are similar in all three, they are not the same – nor do they feel the same to ride. The Thruxton is all about performance and cornering and looking like a supermodel.

The Bonny is your girlfriend.

The Bobber? It’s the stripper you’re doing coke with at 4am. 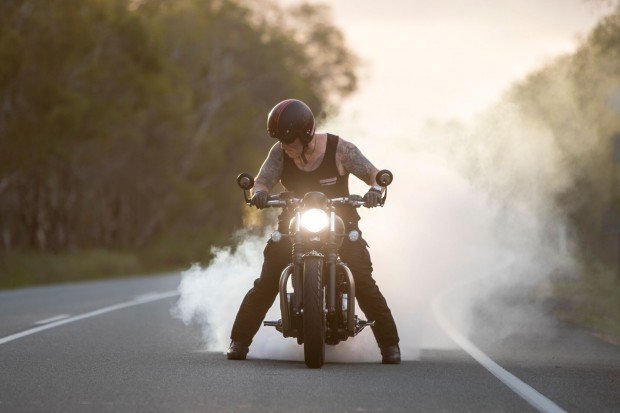 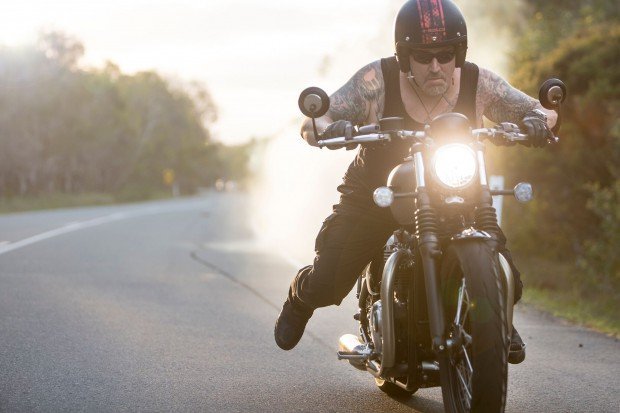 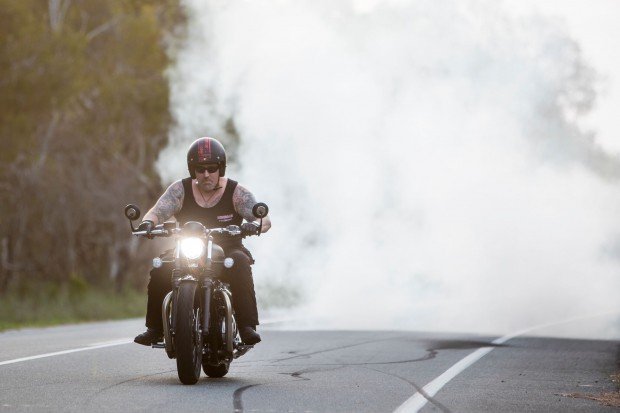 Once upon a time, that would have been a burning village full of lamentations. Now it’s a cafe with an exploding coffee machine…

The Bobber is shorter and lighter, produces more power than the Bonneville, and feeds it to you earlier. You’re riding its peak 106Nm of torquey goodness at 4000rpm, and every one of its 76 horsies is galloping at 6100rpm. The engine feels livelier and meatier and it’s obvious the engineers have poked the ECU with avid cruelty. It co-operates with the new twin air-barrels and 42mm throttle bodies and there’s been some undisclosed witchery among the cams to accommodate the ‘make it a hot-rod’ brief.

Turn off the traction control (it’s also switchable from Rain to Road), feed it a fistful, dump the clutch and it’ll smoke its rear bag up like a Rasta smashing cones. And it will also wheelstand if you don’t mind the vicious clunk it makes as its rear suspension linkages reassemble themselves according to your hoolganism. 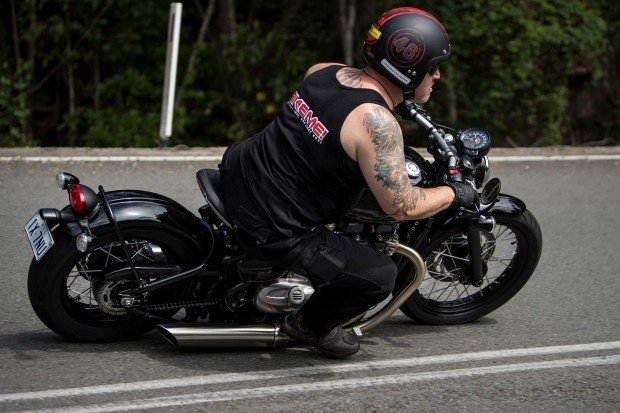 It was hot. Be thankful this is naked as I got.

Triumph calls this rear-end set-up a “swing cage”, which immediately conjured up inappropriate mages of a swinging cage I had once…um, seen in a place where girls sold themselves for money. But we shall not speak of that here.

In essence, Triump’s rear-end is an upside-down version of the Softail’s rear-end with some linkages. It has no adjustment and while it does have its limitations (there is an aftermarket Fox unit coming from Triumph), it works pretty damn well. I thought it would powder my spine, but it didn’t – 80mm of travel isn’t lots. But it’s lots more than most of the competition. 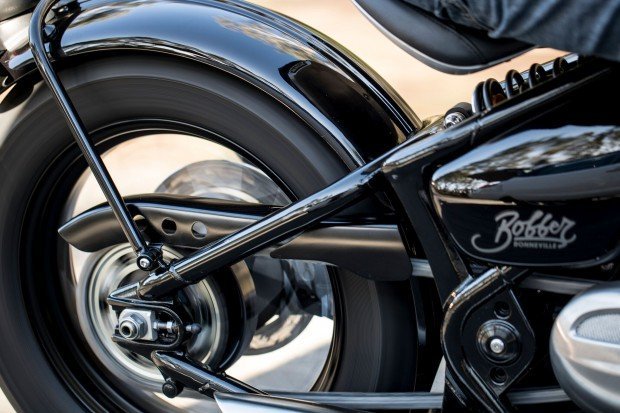 This is the swing cage in the metal. 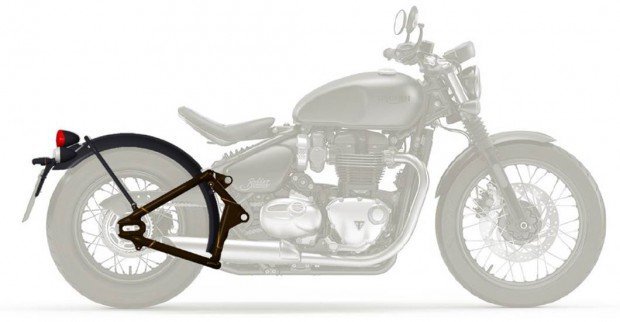 And here it is in isolation. 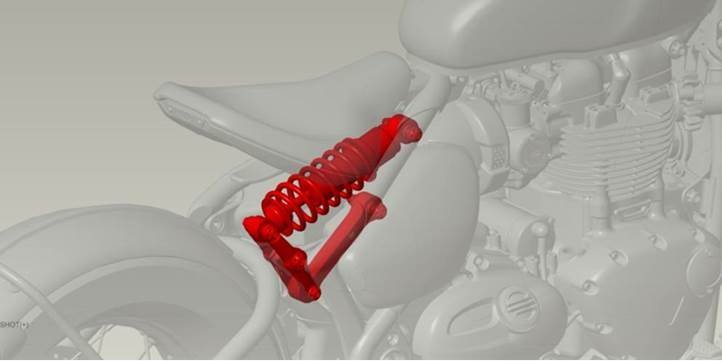 The red bit is important.

Incidentally, I have ridden several true rigids in the past. I know I prefer this faux-hardtail set-up because I rather enjoy being able to walk after a ride.

It’s actually interesting to follow a Bobber and watch it all working. And it works very hard and looks very busy and you think to yourself: “OMFG, when I go over those bumps in front of me my vertebrae will become gruel”, but then you go over the bumps and it’s fine.

I was pleasantly surprised at how well the package handled. Sure, you can grind it into a V-shape, but you don’t have to. You can still get through the swervery quite sharpish. The tyres are made-for-the-bike Avon Cobras. You have a 100/90-19 up front and a 150/80-16 on the back. So it tracks stable and true and isn’t fat-arsed with rubber.

Which brings me to the adjustable seat. Clearly a first for this kind of bike. You undo a couple of nuts and you can slide the nicely padded and sculpted seat down and back (to a low 690mm high), or leave it in its most forward and tallest position. The adjustment is 35mm. Not a lot, but noticeable nonetheless. And bearded women can pretend they’re ‘murdering out their sled’, so there is that. 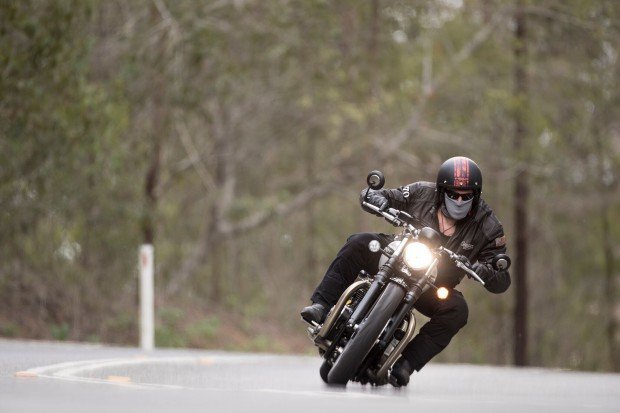 It works. It just works on so many levels.

The instrument nacelle is also adjustable and you can easily tilt it up and down. You won’t need a grinder, hairy ladies. It all works off a small lever and in combination with the adjustable seat, would assist riders in finding their bespoke riding possie. I preferred the seat all the way back and the instruments sitting flat. It felt more bad-arse that way.

Is it comfortable? You know, it’s not bad. I thought it would be worse and was surprised when it wasn’t. I think taller riders than me would struggle a bit, as would those chieftains with wider and more child-bearing hips. I’m thinking I’m at the upper-end of the preferred rider physique. The snake-hipped will have no issues at all.

Of course, this is not a touring motorcycle. There’s only a 9.1litre tank – good for maybe 200 if you’re riding like a well-mannered girl. You can just about halve that if you’re tearing up the rear-tyre and making the Highway Patrol earn its money. In this regard, you’ll be pleased to know the brakes are strong and true, the bike snicks beautifully through the box, and compression lock will be avoided thanks to the torque-assist clutch. 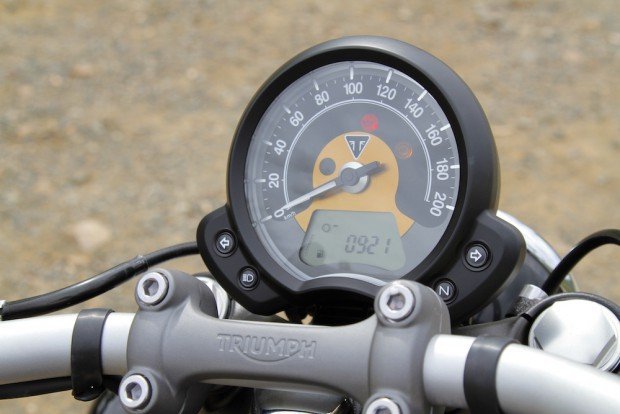 In terms of traveling to exotic places, well, you’ll have to hold your sleeping bag in your mouth or tie it to your back, because you can’t strap anything to the Bobber. Triumph does offer saddlebags to hang off its swing cage, so I’m thinking you’ll be able to carry a few knives, a bottle of whiskey and maybe some fresh panties for the girl. She will have to follow you on her own bike or catch a train and meet you somewhere because you will not now, or at any time in the future, be carrying a pillion on the bobber.

I’m good with that.

In fact, I’m really good with the whole Bobber.

I liked it very much, in spite of my initial misgivings and internal conflicts. Triumph has made the concept of the faux-rigid work as a viable and hugely enjoyable motorcycle to ride.

And it has absolutely nailed it in the looks department. And while I thought, judging from the pictures, the red was THE colour (it also comes in gloss black and a two-tone green-and-silver), I was wrong. The Bobber also comes in a matte finish called Ironstone, and it’s just gorgeous. 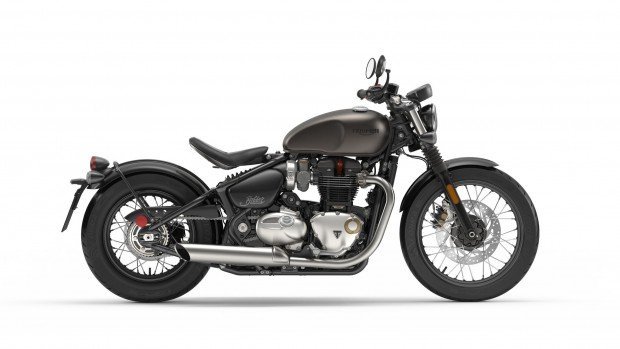 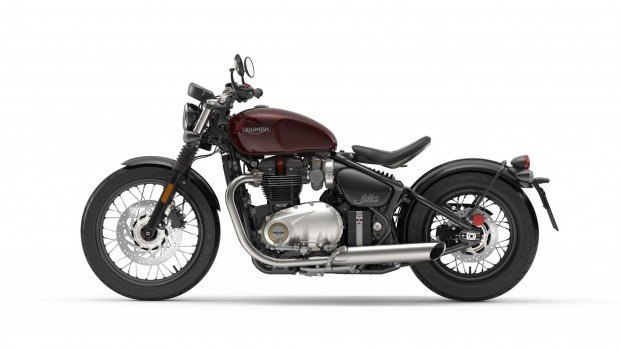 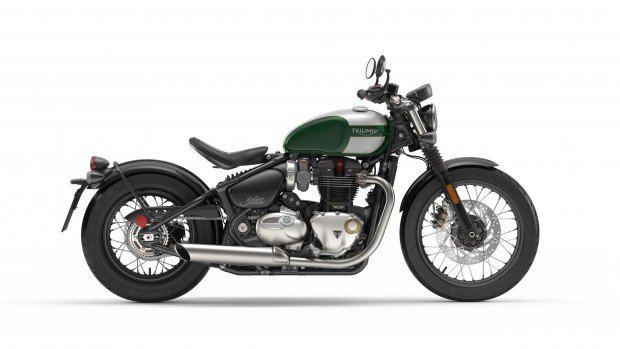 I’m thinking a set of mini apehangers would set it off brilliantly (yes, they are available), and there’s a range of Triumph aftermarket goodies (heated grips, cruise control, different seats) you can get for it, including an offset numberplate – and do I need to tell you things about offset numberplates and speed cameras? No? Good.

I’m also thinking shorter guards, the Fox monoshock, the black surround for the headlight, maybe a stumpy little tilted-back sissy bar, certainly the Vance & Hines pipes, or maybe even two of them crazy old red hot-dog car mufflers if I can find them…See? I’m already sexying it up in my head. I’m making plans for what I would do if it was mine.

The Bobber is the kind of motorcycle that speaks to my past. It’s minimalist – spare and angry (from the factory, no less), but crying out for even more anger, more…well, cutting and paring back, I guess. Until it’s just an engine between two wheels, with stupid handlebars and a ridiculous tank.

And in the old days, that’s what it would have been. It would also have been a nightmarish ride, totally impractical, brutal and evil and stinking of hate. And I would have loved it anyway.

In 1979 a shaved-down act of British malice that looked like this, and which my mates and I had created in a shed full of beer, drugs and filthy George Thorogood  songs, would have ticked every box I had.

But it’s 2017. I am older and softer and wiser. So while I still have all of those 1979 boxes in my head, I need and expect other boxes to be ticked when it comes to motorcycles.

Damn you, Triumph. How is that even possible? 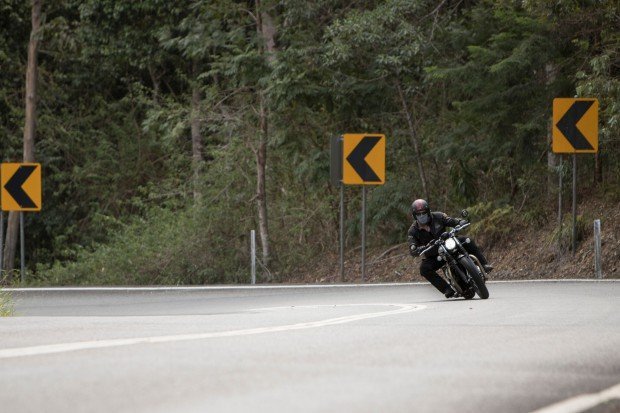 My helmet is by Held

My gloves are also Held, as are my boots.