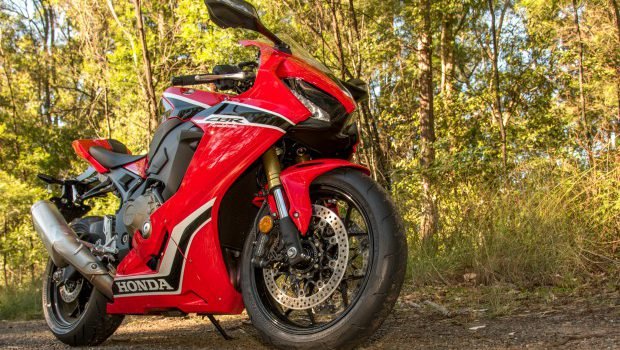 It’s been a long time since Honda cast its eye over its flagship sportsbike. The earth has warmed. The dinosaurs are extinct. One Nation is back.

It’s been 25 years since the CBR1000RR Fireblade first appeared and decade since anything meaningful has been done to it, so it’s rather appropriate the 25th anniversary ’Blade is far and away the best Fireblade Honda’s ever made.

For starters, it simply gorgeous. The 2017 iteration is hands down the best-looking Fireblade ever made, and this is only enhanced with Honda’s usual high-level build-quality.

Now you may be aware some people have tried to put an elephant in the room with the Fireblade. 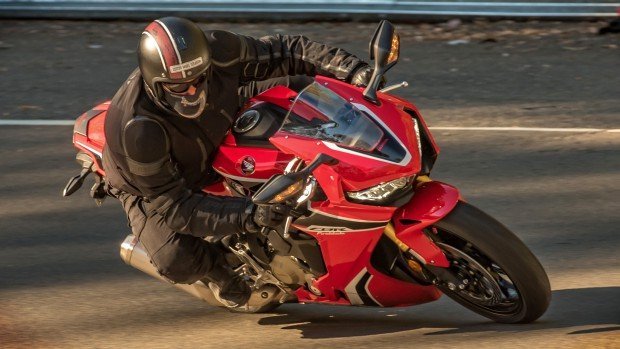 Oh look! Another elephant. But he’s sitting on the bike. 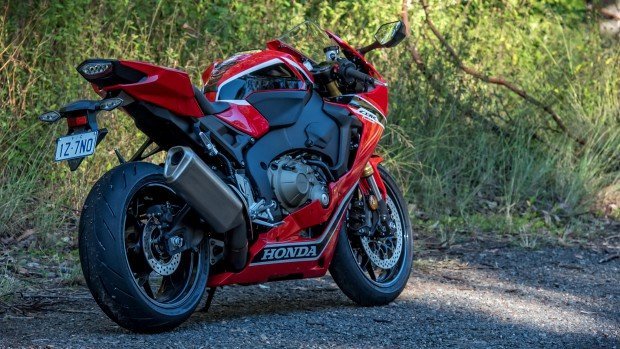 It has a wonderful stance and the tri-colour works.

That elephant was born and bred in the fires of the Isle of Man when a racer declared the gearbox of the 2017 Fireblade was made of neutrals. And there was something untoward about its fly-by-wire throttle.

Much of the press piled on, and with nothing other than the words of a racer to go on, the ’Blade’s gearbox and throttle was being damned the world over.

I am no racer. And I did not ride the bike at a racetrack – which is where the press launch was held. I spent a month with it on the road like a normal human being.

I commuted on it every day and wished I was younger and slimmer. 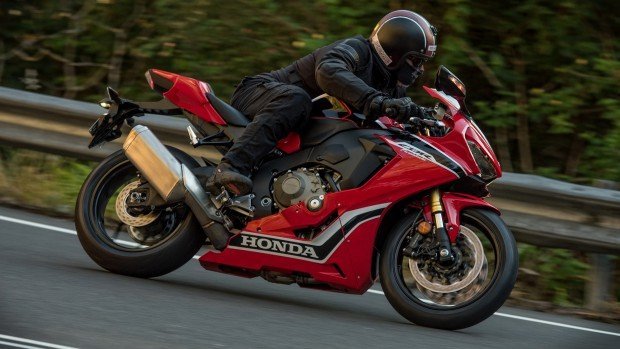 The riding position wasn’t too onerous. It’s good to see Honda can make a relatively comfortable bike without selling the ergos down the river of pain.

I found no false neutrals.

I found no issue with the ride-by-wire throttle for road use.

And I did try, because I had heard and read things.

But then, I always hear and read things about the Fireblade. It’s like the motorcycle press has some kind of retardation going on whenever Honda presents them all with a new Fireblade.

They will tell you its boring. You will read it’s bland.

It’s none of those things. It never has been any of those things and it certainly isn’t those things in 2017.
It is lighter, more powerful, and comes with a comprehensive electronics package – and it will curdle your belly-juice with performance so fierce and precise, you too might wish you were younger, slimmer and braver. 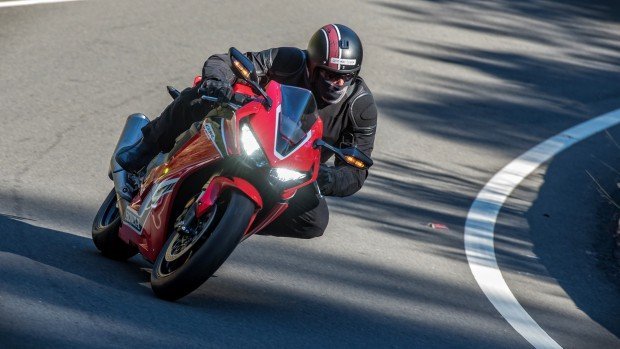 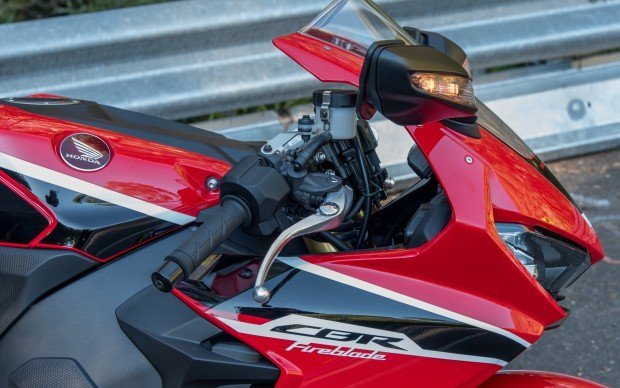 And then you might wonder what’s wrong with the press who gave it such a strange and pointless wrap.

Honda has increased the power-to-weight by 14 per cent, and it feels like it. Compression is up from 12.3:1 to 13:1, the head boasts polished inlet and exhaust ports, and new pistons with a modified crown design. And a redline of 13,000rpm, which is a new limit for Honda in the litre class.
What’s it like at 13,000rpm in top?

No idea. Maybe that’s where the false neutrals are.

I certainly didn’t find them at red-line in first, second and third.

And it’s over 9000rpm where the Fireblade really starts to sing. Honda has always built hard-revving bullet-proof engines, and rightfully deserves all the titles and accolades it has accumulated over the years. The 2017 incarnation feels mighty in every sense of the word. It’s a little highly geared, but that’s easily addressed.

I’m sure much of that has to do with it being 15kg lighter than the previous model; with Honda claiming its changed 90 per cent of the engines main components in search of weight loss.

The exhaust, a MotoGP-developed titanium four-into-one with an integrated exhaust valve is 2.5kg lighter than the previous incarnation.

The weight-saving has been relentless and all-encompassing. Jenny Craig would be proud.

I’m thinking NASA would also be proud of the electronic rider aids. Honda has been playing catch-up here for a while and letting the Italians and the Germans have their way. But that’s over. One look at the lovely full-colour TFT dash will tell you that. 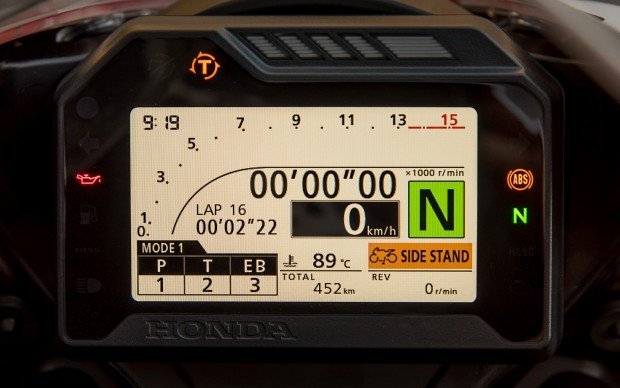 What a time to be alive, huh?

You can now personalise the Fireblade and utilise its five-axis Inertial Measurement Unit (IMU), which measures everything that’s going on in every plane every 10 microseconds.

The ABS system is all-new, with smaller and more compact modulators – and completely turn-offable, which is very new and very welcome in certain racing circles. I left this the hell alone.

So apart from the usual stuff you’d expect like anti-wheelie sorcery (Honda calls its Traction Control Torque Control), the Fireblade comes with rear-wheel lift control. So unlike Marquez, you will be lots happier if your back wheel remains in contact with the ground under extreme braking.

The left-hand swicthblock is command central, and its relatively easy to navigate through all the menus and sub-menus.

If you don’t give a shit, you have three pre-set rider mode options alongside the two programmable ones, and each rider mode is split into three sections.

Torque Control has nine levels. Or 10 if you count the ability to switch it off completely. Level One is minimal intrusion. Level Nine is overkill. I left it at Level Four and did not die.

And finally, Engine Braking Control. Three levels here, with Level One offering maximum engine braking and Level Three the least. One really is rather severe. Three is somewhat terrifying. I opted for Two.

But I really am one of those riders upon whom all this electronic whizzbangery is somewhat wasted. Certainly, if I spent a lot of time at the track, I would relish being able to fine-tune the Honda and flick through its various settings and maps and bollocks on the fly, while imagining I was leading the Suzuka Eight-Hour. 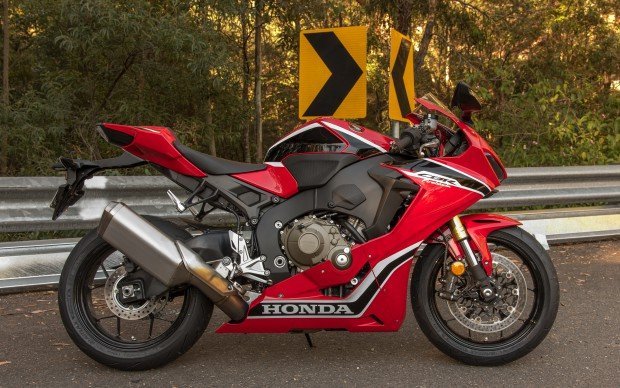 Apex predator. See how it’s juxtaposed with the signs? So clever.

But I don’t do that. I will find a setting I like, and pretty much use that all the time, opting only to go to rain mode if I could be bothered.

Road-riding is not like track-riding. We all know that. If you’re switching maps on the fly as you’re hammering along on your favourite Sunday ride, there’s something wrong with you.

For the less than one per cent of riders who have the skill to use all of this and get something out of it, Honda absolutely provides. The rest of us are much happier just bragging about having it.

Certainly, as this is Honda’s first crack at a fly-by-wire sportsbike, a hardcore A-grade charger might say the transition from no throttle to all throttle is a little snatchy. And you might notice this as you strive for a podium.

But you will not notice anything untoward riding it on the road. 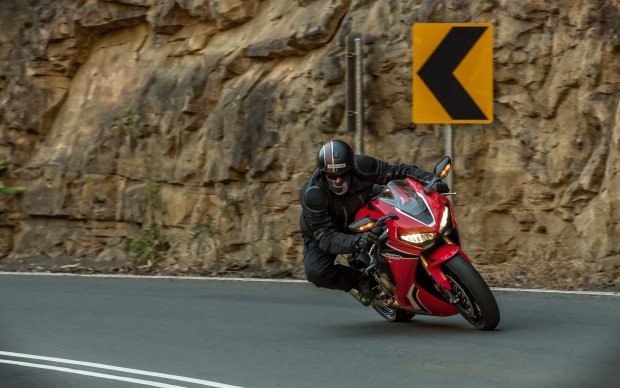 It’s better than I will ever be. And I’m good with that.

In fact, all you’ll notice is how small the Fireblade feels. How lightly and easily it tips into corners. How monstrously satisfying it is to crack that throttle coming out of a corner and feel the front-end lighten but without a crazed head-shake…in short, what a beautifully mannered and refined sportsbike the new Fireblade is.

You can fit a powershifter to it, and I would, because it just makes life at the pointy end less complicated and allows you to focus more on riding smoothly, which is where the rewards lie.

The brakes are also new – Tokico radial calipers gnawing on 320mm rotors – and at no stage did I wish the brakes were stronger. These will do just fine, ladies and gentlemen. Seriously.

Interestingly, the suspension is very hard to fault. Even for my 110kg. Up front there are 43mm BPF Showas, and on the rear there’s a Balance Free Rear Cushion (BFRC) shock.

What is that, you ask?

Well, this is what Honda says it is…

The rear suspension system uses the Unit Pro-Link configuration and introduces the first Balance Free Rear Cushion on a production motorcycle. Developed in conjunction with world-leading suspension specialists Showa, instead of the conventional single-tube layout, the Balance Free Rear Cushion uses a double-tube design: the damper case and an internal cylinder. The damper piston features no valves. Instead the damping force is generated as displaced oil passes through a separate damping component. In the conventional structure, the compression-side damping force was generated in two places with the main and sub damping valves, but elimination of the sub valve and concentration in one place allows pressure changes within the cushion to be controlled even more smoothly. And because there is no small amount of oil being used at high pressures, damping force response is improved and damping force can function smoothly during load input. Moreover, damping force can be generated smoothly when switching from tension to compression due to smooth pressure changes. The Balance Free Rear Cushion delivers more consistent damping over the duration of a ride, plus improved shock absorption and therefore greater traction since contact is more consistently maintained between the rear tyre and the road or track surface. This technology has been proven in both the prestigious Suzuka 8 Hour race and the MFJ Superbike All Japan Road Race Championship. Indeed a CBR1000RR Fireblade fitted with a Showa Balance Free Rear Cushion won the 2010 Japanese Superbike championship, underlining the advantages of this advanced new suspension solution. Easily accessed rear suspension adjusters: The combination of Honda’s Unit Pro-Link rear suspension and the Showa Balance Free Rear Cushion brings more than simply improved rear suspension performance and increased traction. To allow road and track riders to more easily adjust the rear compression and rebound damping performance, the adjusters have been placed prominently on the top of the shock body, offset to the left. As a result the rear suspension can be more quickly adapted to suit different riding conditions and requirements.

If like me you lost the will to live after the first two sentences, let me re-cap that – it’s really easy to adjust (easier than the BMW, the Gixxer and the R1), the damping takes place outside the body of the shock absorber, the piston is solid thus preventing the cavitation that happens in single-tube shocks, and it’s never been used on a production bike before. Oh, and it works on race bikes.

Which I guess is what the Fireblade really is.

With its advent, Honda has now joined the other Japanese manufacturers, the Italians and the Germans, in no longer watering down their litre sportsbikes to make them more road-friendly.

The Fireblade is as road-friendly as it ever needs to be.

The fact it’s now more track-focused and able than ever before is most welcome.

The new edge on this weapon is very sharp indeed.

YOU MAY SEE MORE HERE

MY THANKS TO NICK EDARDS/HALF LIGHT FOR THE KILLER PHOTOGRAPHY