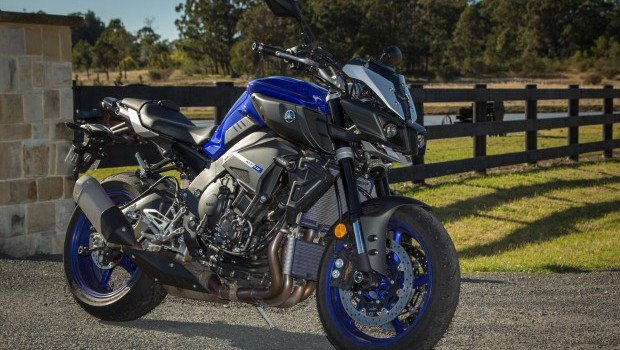 A reasonable man would expect the flagship of Yamaha’s acclaimed MT range to be something special.

But I am not a reasonable man.

Especially when I have been kept waiting for an uncivilised length of time.

I have been gorking and snorting and pawing at the floor since I first saw pictures of this thing in 2014.

“Who is this whore Arwon and why is she naked in your dreams, bastard?” my wife asked me one day.

I showed her pictures to calm her down. But I remained twitchy and my eyes continued to gleam.

I missed out on the press launch because I was in Europe, but once the jet-lag had cleared upon my return, I called Sean Goldhawk. 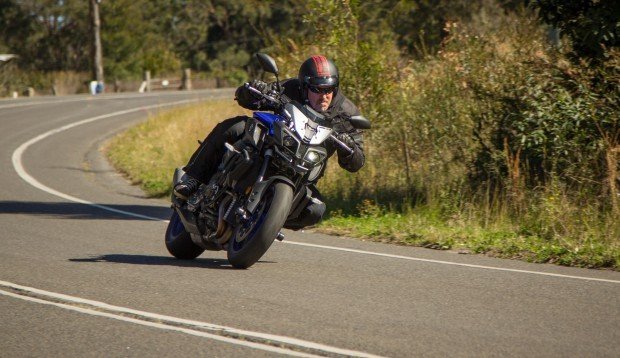 It was certainly worth the wait.

I nodded. Reasonable men might require a more extensive briefing about a new model, but like I said, I am not one of them.

And at the end of a thick, rich and often very dry-mouthed two weeks on the MT-10, reason and I have parted company world without end, Amen.

I am very familiar with the MT range. I think Yamaha’s whole torque-driven, street-purposed array, from the MT-03 through to the MT-07, the MT-07HO and on to the MT-09 variants are some of the best road bikes on the market today. 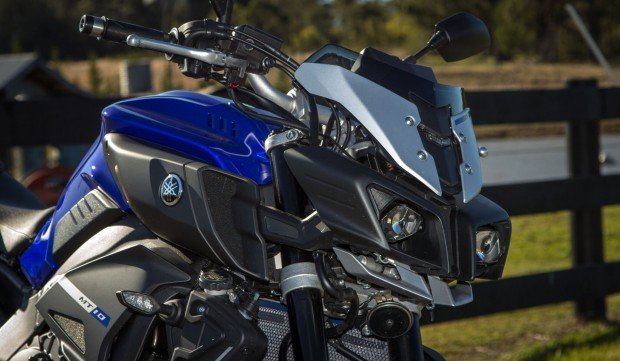 Look, Mike Tyson isn’t pretty either. But he is very effective. Besides, pretty is what girls should be. 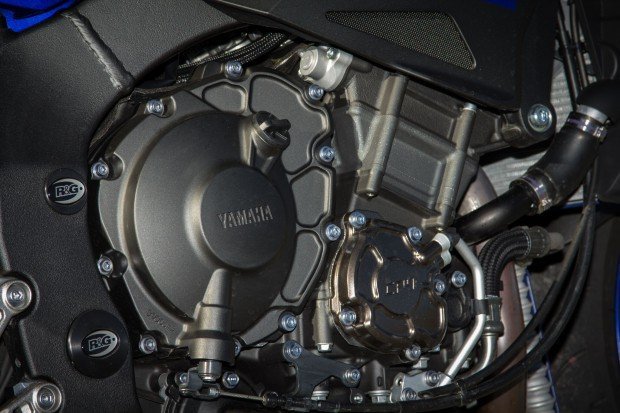 Inside there be torques. Lots of them. With horns and teeth.

It just follows the nil plus ultra of that family, the MT-10, would have to be some distance on the other side of special. And it is. And it has to be because it’s in the ring with some pretty heavy hitters.

It is not, as some would have you imagine, competing with the Tuono RR, KTM’s Superduke, or Ducati’s 1200 Monster. In-line 1000cc-fours are not direct competitors with 1100cc and 1200cc twins and V-Fours. The vibe is completely different, just as the engine capacity dictates it to be so.

A quick look at the basic numbers backs this up…

Here are the others…

Now that that is out of the way, we can move along aboard the MT-10 with our minds unclouded by ignorance. 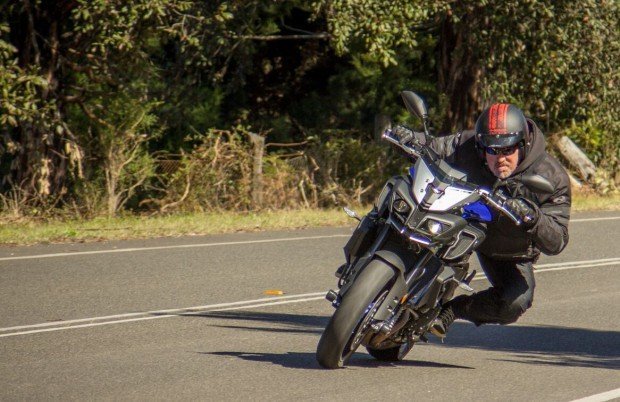 “What time is lights-out in Long Bay?” 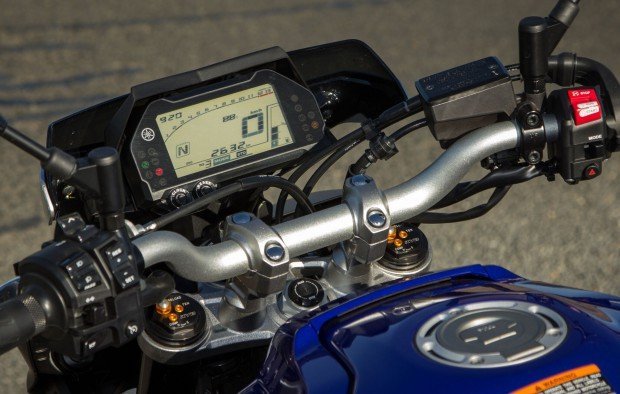 It’s not the coloured dash of the R1, but it’s just as readable. The mode-switch is there under the big red Fire button. And you could spend hours twiddling the gold holes on the fork-tops like you had some idea of what you were doing.

Having ridden, rather extravagantly and extensively, the R1 and the R1M, from which the MT-10 derives its juices and minerals, I decided I really have no business belting around on high-end racing bikes.

For that is exactly what the R1 is. It’s a track-bike you can ride on the road. Yamaha makes no bones about that. That being the case, and me being me, and time being time…well, you can see there’s not much point in such a relationship.

But sit me up, sell all that fairing fibreglass and clip-ons to Allerton for spare parts, tune the R1 for more mid-range and bottom-end, and there’s me pawing at the floor again.

The MT-10 is a bike designed to be ridden on the road, which can also acquit itself on the track, and is therefore biased both ergonomically and torquelingly (yes, that is a word because I just made it up) to be doing just that.

Let me first deal with its looks, because the MT-10 has polarised the punters.

Firstly, it has no business being anything other than black. It can certainly be light black, but whoever decided that colour would work with prison-bathroom-tile-coloured wheels needs to be lashed with bamboo canes. It also comes in blue, but…yeah, that’s not black. And the MT-10 needs to be black because in any other colour, its cold aesthetic brutality is sold short. 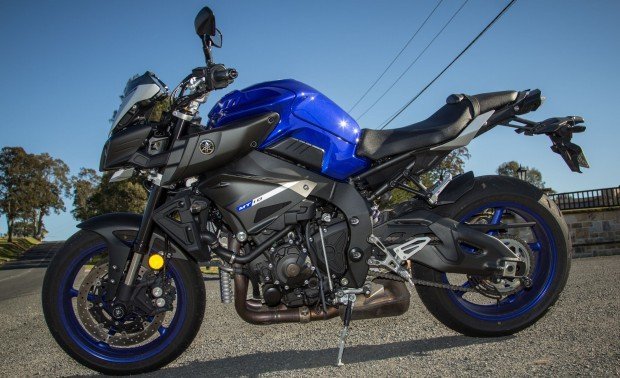 That collector box underneath is not a thing of beauty. But that is easily fixed and I blame the perishing narwhals for drinking all that pollution and perishing, and thus inflicting unsightly things like this on all bikes. Don’t drink the bloody pollution, narwhals, How hard is it? 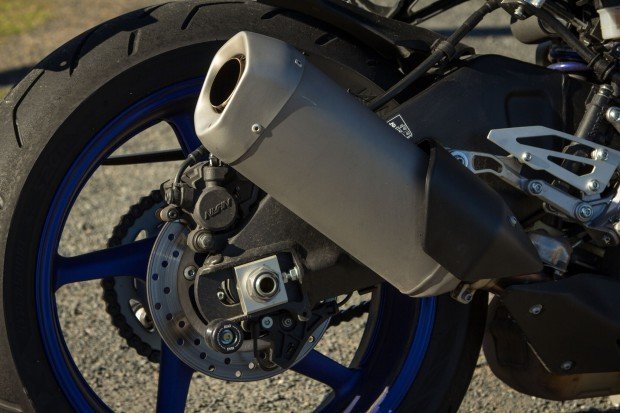 The place of the thrumming.

It has the mien of a cage-fighter. Its “face”, which is what draws the most criticism from sensitive souls who like the swoopy and the svelte, actually serves a purpose.

On other nakeds, once the speed starts to climb over the 160km/h mark and sails into the 200-plus zone, you will find yourself fighting the wind-blast. And while it is a righteous fight, it is tiring.

For reasons I can only put down to having access to a wind tunnel, the MT-10s segmented headlight/nacelle/busted crab arrangement seems to disrupt the high-speed air-blast. So even at peppery touring speeds between 160 and 220, I found I was not pulling myself forward on the handlebars.

That is no small thing, and frankly, I quite like its busy, techy, roboty styling. It makes me feel all modern.

But looks are subjective.

So let me continue in this vein and speak to you about Beast mode.

Yamaha offers three engine modes on the MT-10. All are switchable on the fly, unlike the excellent and unobtrusive three-stage traction control that can be turned off and needs to be dealt with at standstill. 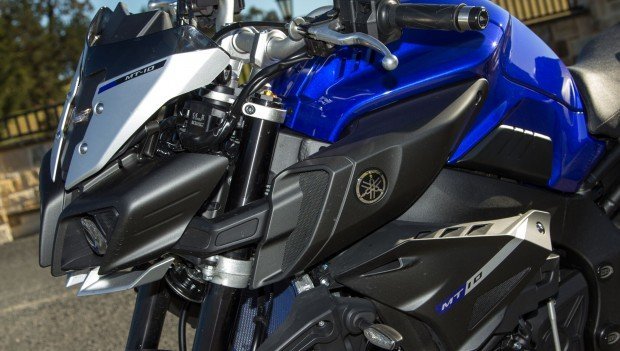 There’s a lot going on, but that front stuff certainly breaks up the air very well. 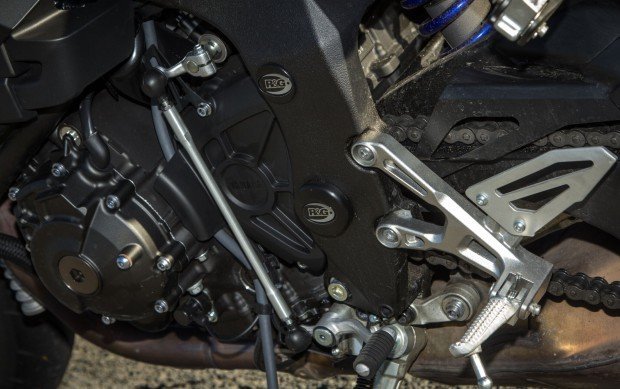 Here is where your powershifter goes.

Now put it in A Mode. Now you have a man’s bike. All the fluffiness is gone. You now have a litre-pumped monster offering a crisp, sharp, throttle response. Not snatchy, just direct and immediate. And very much the choice when seeing who can pee higher up the tree.

And then there’s B Mode. Or “Beast Mode” as Sean calls it.

Clearly someone at Yamaha has a sense of humour and a soul as black and evil as Satan’s sledghammer. Because what was a perfectly acceptable throttle response in A Mode, in B Mode becomes something best used powering out of Siberia when you’re hunting Wayne Maxwell down. 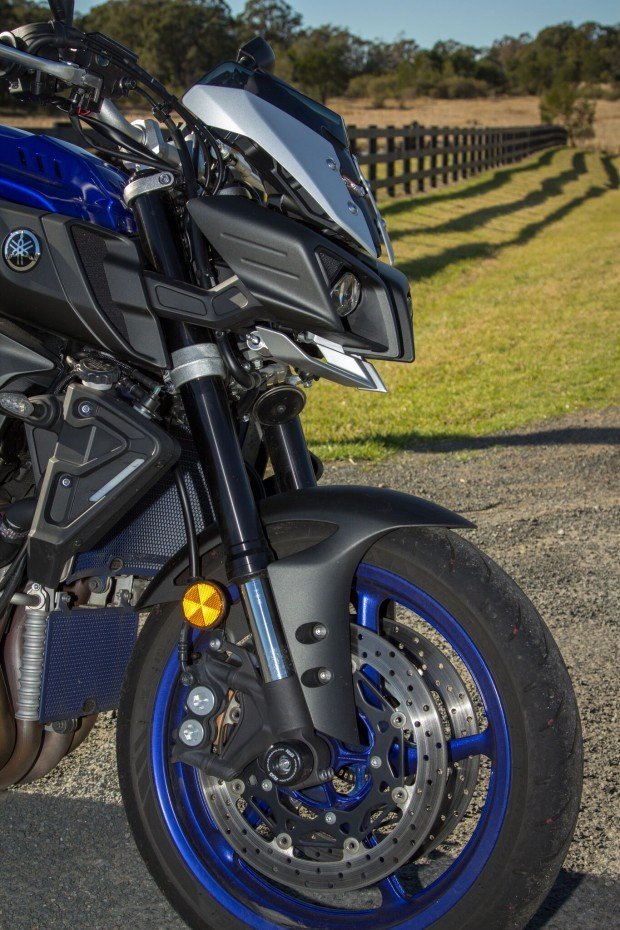 All the brakes you’ll ever need.

That amazing engine will pull clean and hard in top from 2000rpm, with a mid-range stomp that will leave your adrenaline glands crippled and barren. Torquey, torque, torque, ladies. All day everyday.

So then there’s the handling. It’s so easy to go so fast, pretty much all the time. And I understand why Sean would email me every second day to ask about the state of my license. His concern was entirely justified. It takes monastic self-control to keep oneself out of jail. But hey, the upside is you could regale your cellmate with amazing tales of speed and daring as you whiled away your time.

What does that mean? Nothing as far as I’m concerned. Apart from the fact it will wheelstand like a 1000 bastards even with the traction control on its lowest setting. It steers sharp, it steers true and it holds its line with grim determination. That electronic steering damper is a glorious thing. You’d think something this short and nasty about the engine would be shaking its head like a mental patient if the road bumps unsettled it. But you’d be wrong. It just tracks. Pile on the power coming out of a bend and you will stay on your side of the road. Confidence-building to the max.

The suspension is the same as on the R1, but it’s been dialled down for a more amenable ride. It’s by no means soft, but it’s not harsh enough to send you back to the gym for more shoulder presses. Of course it is fully adjustable, so you can always decide what level of bounciness is your best friend.

Yamaha explains the How and Why perfectly well, albeit in somewhat busted English…

If that’s all too technical, understand it goes: “GGRAAAAAAAH!” instead of  “WWAAAAAA!”.

It thrums rather than shrieks like other in-line fours when you’re up it. 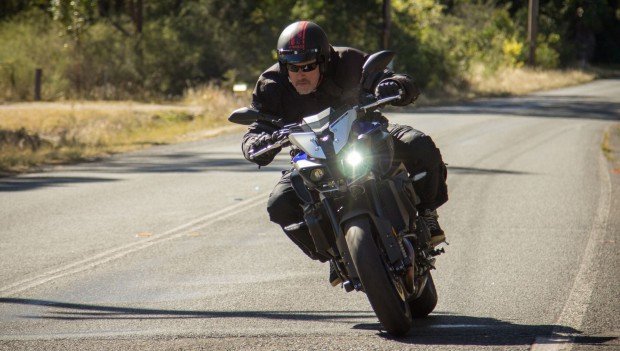 A man could certainly leave the stock pipe on and be satisfied. Or he could drink some beer, succumb to peer pressure and put something loud made from titanium on the MT-10. I guess it all depends on the man, how much beer he’s consumed, and how easily he crumbles under the pressure of his peers.

Likewise, if you measure your manliness by being able to spend hours and miles in a racing crouch, more power to you. I was once like you.

The seat seems to be some kind of bizarre blend of firmness and pliability which you can do good miles on, but still slide off with ease when you come up on someone who needs to be raced with. 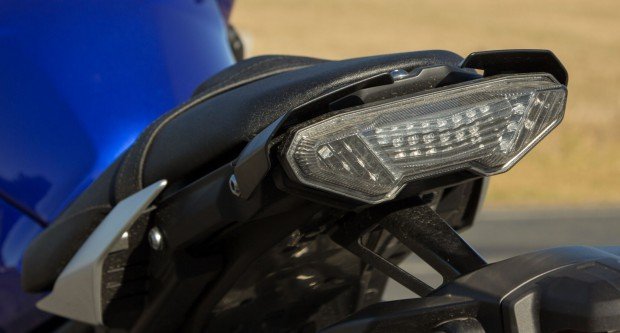 R1 owners might well see a lot of this angle.

The headlights are good at night. Yes, they are the R1 goggle-eyed projector-like units just hauled closer together. But good is not great. Especially if you’re out buying methamphetamine like a sweaty criminal. Still, headlights are not a deal-breaker for me. Nor is pillion comfort. She can put up with it and be grateful you didn’t buy an R1, or get a cab.

It does, of course, demand a powershifter, which comes as an added extra for 400-odd bucks. I’d certainly spend that money. And then I could justify to myself that I’m OK with the fact that the MT-10 is a thirsty bugger. It does like its Premium, and it will empty its 17-litre tank at an eye-opening rate if you’re being dastardly. Be a little circumspect and you’ll get over 200km with no worries. Then again, as they say in the classics and on BikeMe! T-shirts, fuel economy is for vegetarians.

Now about the money. I’m not the bloke to make judgement calls about such rubbish alien-to-motorcycle concepts as “value-for-money”. You want a bike bad enough, you’ll find the money. If you reckon you can’t afford it, you don’t want it bad enough. It is that simple.

That seems a small price to pay to park such a marvellous devil outside your door. 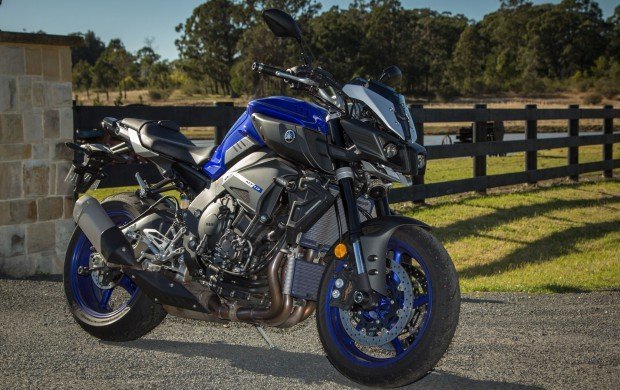 This is blue, to match the colour of your Highway Patrol-inflicted bruises. 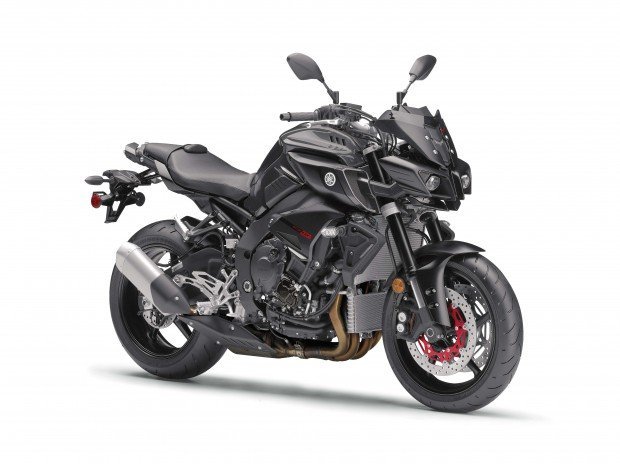 Here it is in the correct colour. 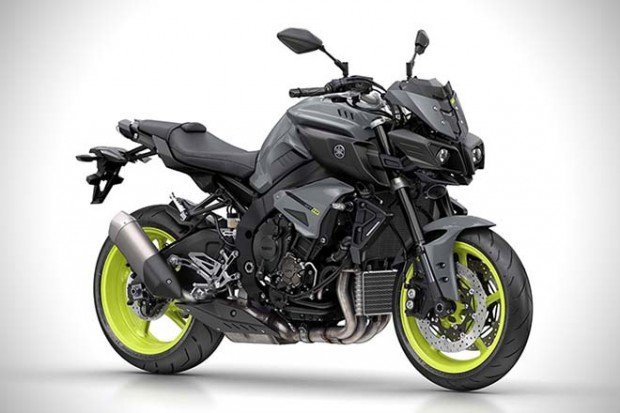 If not for the wheels, light black is perfectly acceptable.

WHAT’S HE GOT ON?

I am resplendent in Held gear.

All of which you may view and acquire HERE.