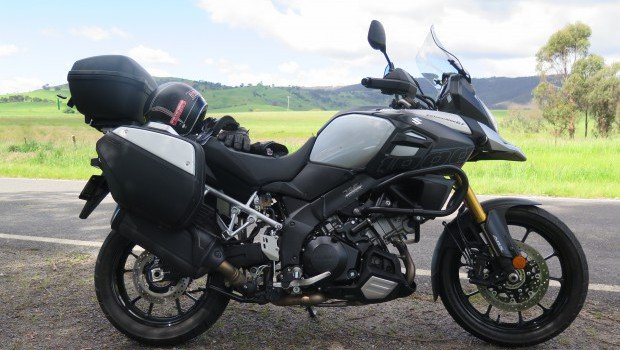 You sometimes don’t figure out how capable a motorcycle is until you pass some race-leather wearing plumtwonk, with your cags in your throat and a song in your heart.

Let me tell you how this pass came to pass… 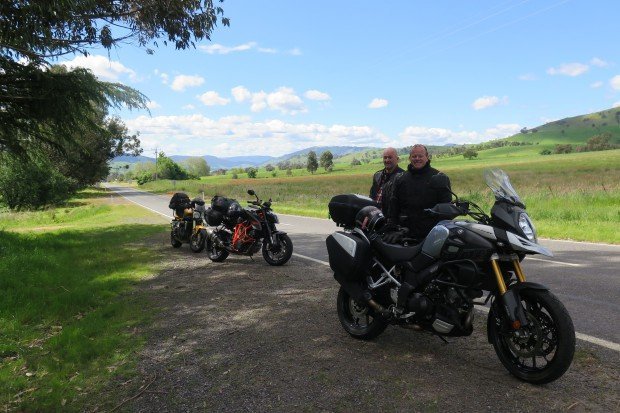 This is what rain does to this country. It turns it green for a bit.

I was parked up on the lookout that sits at the start of the Jamieson-Eildon Road, and looking down into that magnificent river valley, now in flood, and thinking I was outgunned to the shit.

Behind me The Punisher was smashing bongs like it was 1969. He always carried a bong to ward him against the rigours of high-speed touring, and he would push his head into his Super Duke R’s saddlebag and lung back a cone or three whenever the opportunity arose.

It was how he rolled. 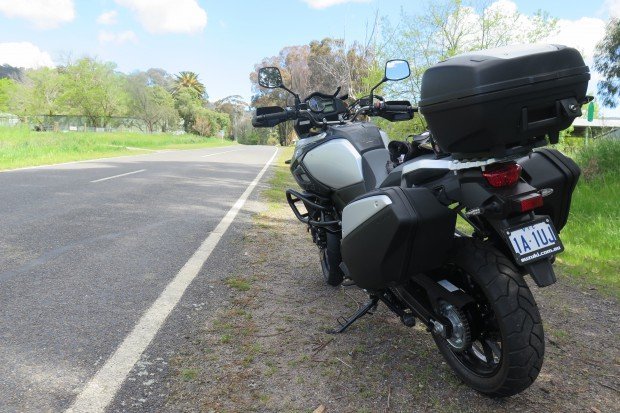 It’s not the kind of bike the Highway Patrol pays much attention to.

Off to one side was a posse of Hard-Chargers. I could tell they were Hard-Chargers because they were all wearing race leathers and riding R1s and Ducati superbikes.

They were looking down their hard-charging noses at The Punisher and me. He was hacking up bong-smoke, and I was standing beside a V-Strom complete with panniers, a top-box and exciting Bridegstone Battlewings, so their disdain was understandable. Also with us was The Sparky and his ageing Speed Triple. He is one of the friendliest, gentlest, kindest and most generous of men. The fact that he looks like he strangles people was probably why none of the Hard-Chargers said anything to us, but one should never judge a book by its cover, should one? 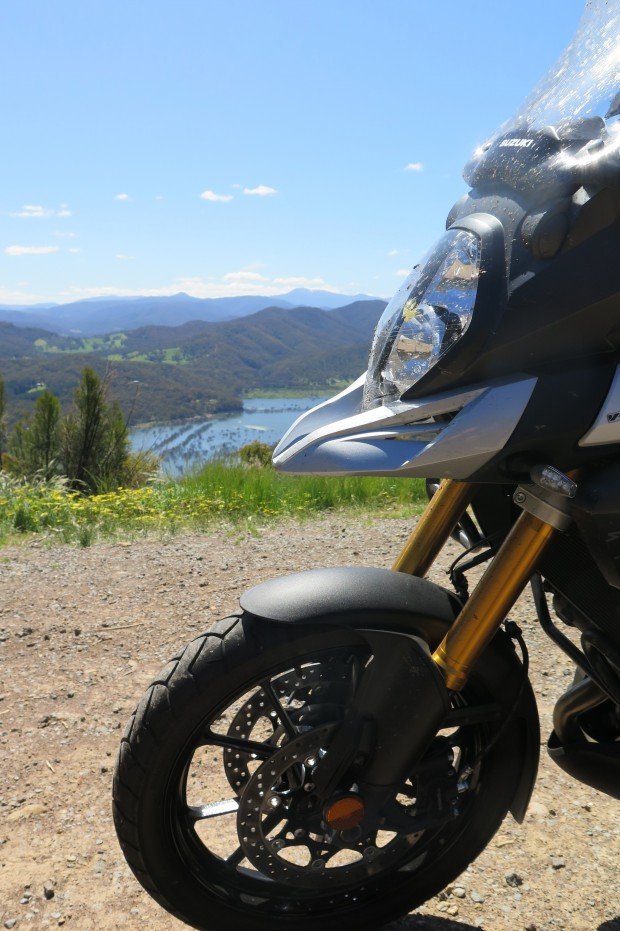 There’s a lot of water down there.

Had they hung around much longer, I had no doubt The Sparky would have generously offered them a bong, but they left in a contemptuous flurry of fizzing race-pipes and super-sticky tyres and headed for Eildon.

Which is the direction we three were also heading. But not before The Punisher had offered me a bong.

“I’m good, brother,” I said. “This road terrifies me enough as it is, and if The Fear comes upon me as well…”

“You’ll be right,” he grinned. “That V-Strom goes pretty good.” 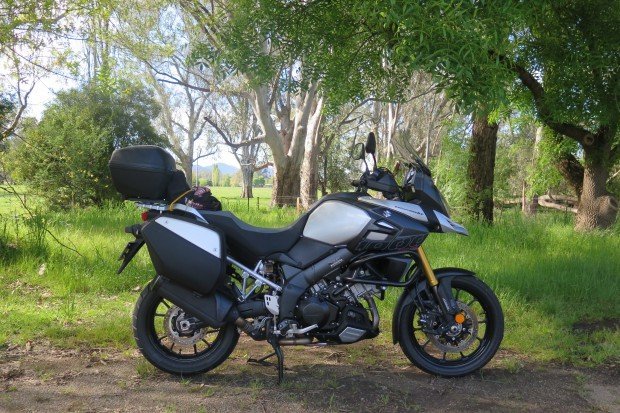 It is equipped with everything you see here, except for the ocky strap and sloppy joe. I’m thinking they are aftermarket.

It was true. The V-Strom and I had given a good account of ourselves so far. The Murray Valley Highway, Granya Gap and the magical Happy Valley Road were spectacular, and ridden accordingly.

I worked at keeping the V-Strom, its wonderful hard luggage and its dual-purpose tyres in touch with The Punisher, and was surprised  it hadn’t take as many prayers as I’d thought it might.

Belting along at our normal touring speed of 130-160km/h, the V-Strom sailed along effortlessly. I sat high and I sat comfortably; I felt capable of anything, and the Suzuki had not let me down at all.

Me and the V-Strom killed more bugs than a barrel of Mortein.

The Punisher is not an easy man to keep up with when he gets in The Zone. But I did not falter and I did not relent. And I was consistently ahead of The Sparky and his Speed Triple, so there was that.

The big Strom, as you know, has a bit of a cult following. And rightly so. It’s so much more than the sum of its parts. It’s not as technologically overwhelming as its German counterpart, and it’s not as batshit power-crazy as the Austrian contender. 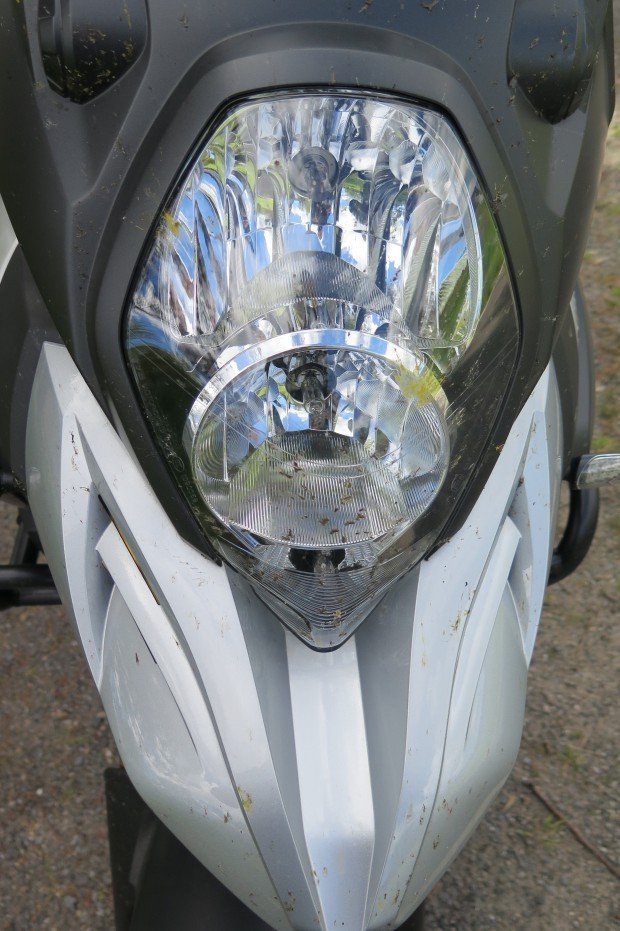 The illumination is fairly good at night, but I would certainly hang some big-arse LED spotties off the crash-bars.

But it’s a Suzuki, so there can be no question of its reliability and I don’t recall any DR recalls in living memory.

As a consequence, it sits somewhat aside from those two super-tech big-dollar bangers, and kinda looks at them with a bit of a cheeky grin.

It’s not really slower than the Beemer, and it isn’t embarrassed by the Katoom either, despite having a smaller engine – it’s lighter than both of them. It’s 90-degree donk is smooth, responsive, very willing – and it tracks like a train at speed.

It has a lower seat height than either of them too, comes with switchable traction control and ABS (which you can’t turn off), an adjustable windscreen (works well, doesn’t vibrate or reflect stuff I don’t want reflected), one-key easy off-and-on hard luggage and is, put simply, a sweet-handling, comfy, hugely capable all-roader – and a whole lot of bike for not a whole lot of money. Last I looked Suzuki was running them out for $15,990 ride-away (The one I’m riding here is fully optioned up, so it’s a bit more than that). 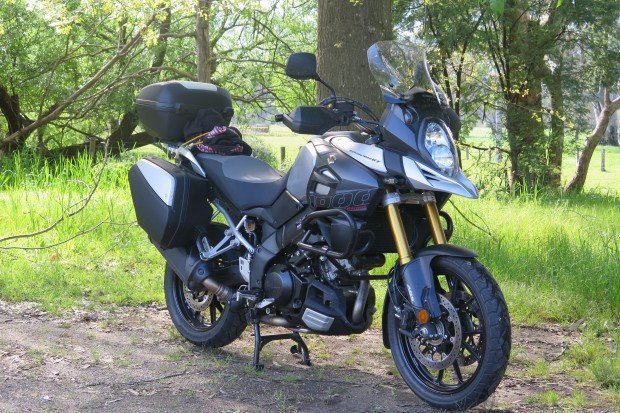 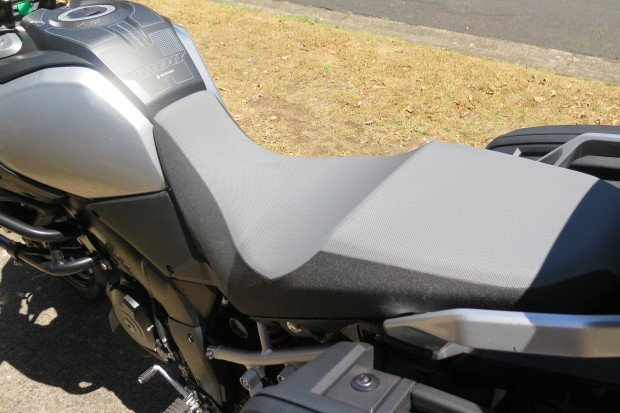 This is a true big-mile seat. It’s even got grippy vinyl on the sides if you decide you wanna start something. 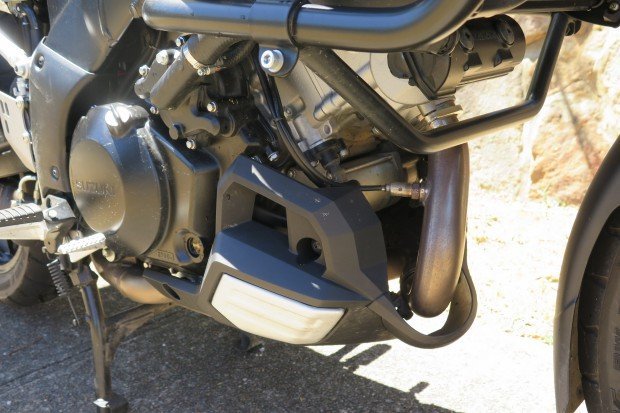 Anyway, the only thing it doesn’t have that it should for a bike of its nature is heated handlebar grips.

I was missing their toasty comfort as we did the transport stage up the Hume the day before.

But this day was sunny and warm. And ahead of us lay the bulk of the Jamieson-Eildon Road and the Hard-Chargers.

We had not long back hurtled majestically over the Mansfield-Whitfield Road. So what edges had not been scrubbed off our tyres yesterday, had certainly been taken care of that morning.

I was still looking askance at the Battlewings. They were doing my head in. They shouldn’t have been hanging on as well as they had been, and apart from a little lack of feel, were acquitting themselves just fine. 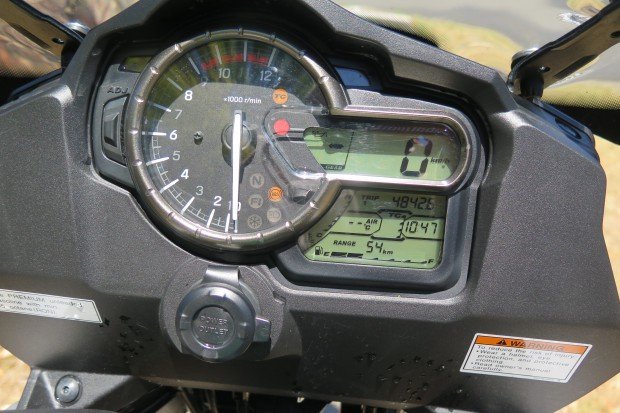 Pretty comprehensive and easy to read. I really don’t need more info. When will the petrol run out, how cold is it, and what time is it. Done. 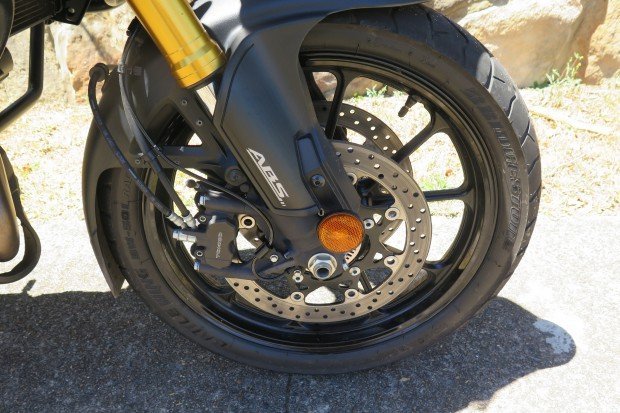 The Tokis did themselves proud, as did the Bridgies. The ABS is very good.

How fine? Well, I found out in pretty short order.

It didn’t take us all that long to catch the Hard-Chargers.

It took us even less time to pass all nine of them.

The Jamieson-Eildon Road takes few prisoners, has a pretty sketchy surface in some corners, and seems to go on forever, but I guess that’s what makes it such an exciting motorcycle road.

My dry-mouthed hyperventilation as we went past them was sound testament to my excitement.

It got even more exciting when three of the Hard-Chargers then hammered past me and set off in pursuit of The Punisher, who was clearly in The Zone.

“Good luck with that, champions,” I muttered to myself, but I did feel there was a podium on offer if I was to apply myself and get “a good-a rhythm-a” going. 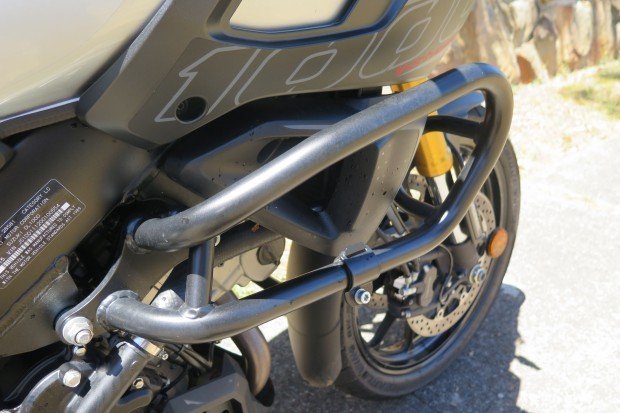 A man could hang some serious lighting off this. And the heads of his enemies, if he had any.

I hauled past an R1 and a Ducati, with my top-box and panniers aflame with the thrill of the chase. There was another R1 ahead of me, but he looked to be in serious pursuit of The Punisher, and riding way faster than I was able to, so I resigned myself to the bottom step of the podium.

And then suddenly I was fourth.

The Hard-Charger on the Ducati was on it. He passed me hard under brakes and was scything through corners like a man possessed.

He was pretty smooth, I have to hand it to him. Me? I was not so smooth, but I was just as quick. And corner by corner, getting quicker.

The V-Strom was not intimidated by this Italian nonsense, and after a few bends, I saw a chance to pass and took it. I think I might have been in third. I’m pretty sure I was in all the brakes there was to be in. So it was a hard pass. But clean. And it must have looked awesome from where he was sitting.

Then on we went.

I remember hearing the Ducati behind me. He must have been very close, but I did not dare flick a glance into my mirrors. I was watching the road surface like an old man at a netball game.

And I’m pretty sure if it hadn’t been for the clay washout I sailed into at pace the Ducati may well have done me on the closing downhill  stage. The V-Strom shrugged off the washout and powered on, and I’m thinking maybe the Ducati didn’t shrug it off quite so well.

Either way, when I got to the T-intersection that marks the end of the road a few minutes later, I was third. 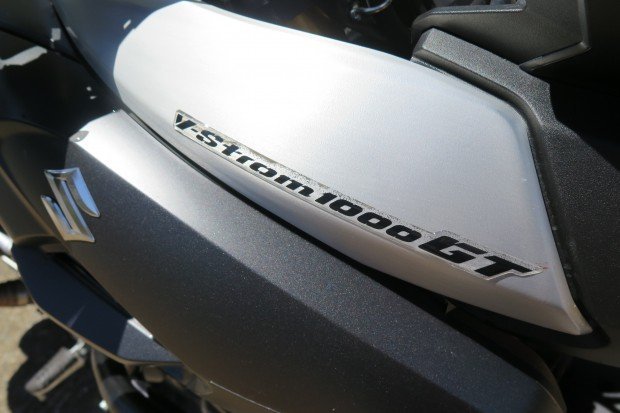 We toured, and it was grand.

The Punisher was parked off to the left calmly puffing on a victorious Winfield, and the R1 rider was off to the right, walking in circles. Neither was speaking to the other.

I got off the bike and walked over to The Punisher.

The Ducati arrived and parked with the R1.

A young bloke got off, and walked over to where I was standing with The Punisher.

“Is that a V-Strom?” he asked the air, as he paced slowly around it, staring at its panniered eminence.

“Gee, that goes alright,” he said looking up at us.

I nodded somberly. When a man states the obvious, no other response is needed.

Then he perked up.

“Oh,” he said brightly, as he peered even more closely at the V-Strom. “It’s the thousand. That’s why.”

We were going to look at him disdainfully as he walked back to his mate, but The Sparky turned up covered in mud.

“A little bit,” he nodded. “That big wash-out caught me out. I went straight off the road and into the table drain. I stopped upright, then my leg slipped in the mud and I fell over.” 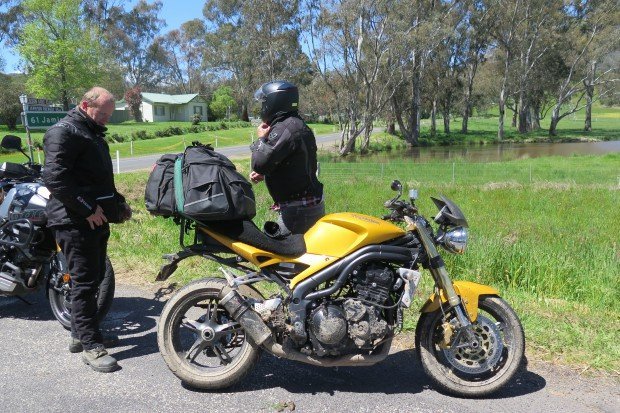 If you look closely… 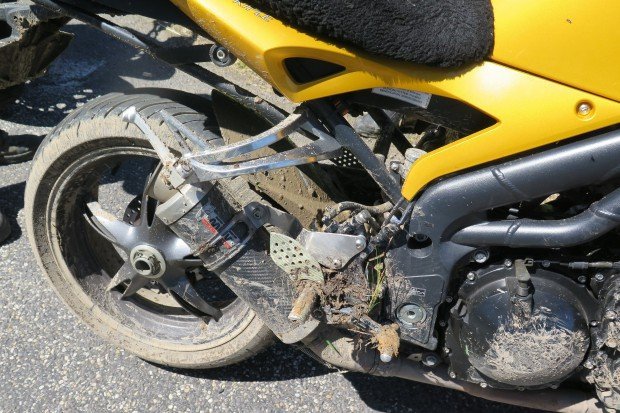 I left them to their gurgling, and pulled my camera out of the top-box.

Can I tell you again how much I love hard luggage?

It just makes my life so much easier. Sure, it does cause people to look down their hard-charging noses at you, but you can’t beat hard-luggage for sheer convenience. 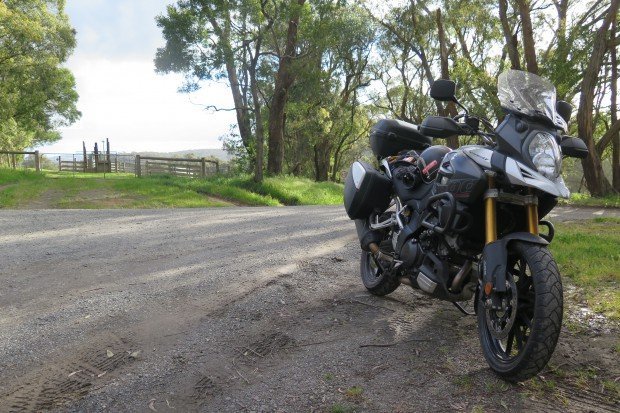 Next year’s V-Strom (both versions) is going to be something pretty good from what I have heard. It will have new Motion Track brakes, a new windscreen that adjusts for height and angle (this year’s only adjusts for angle), a new Easy Start system, and new Low RPM Assist. The XT version will come with tapered handlebars as standard and both versions will have hand-guards and under-engine guards as standard in 2017. Next year’s models will also have a new DR-BIG-inspired “beak”, but it’s not like they’re ever going to be dead-sexy. 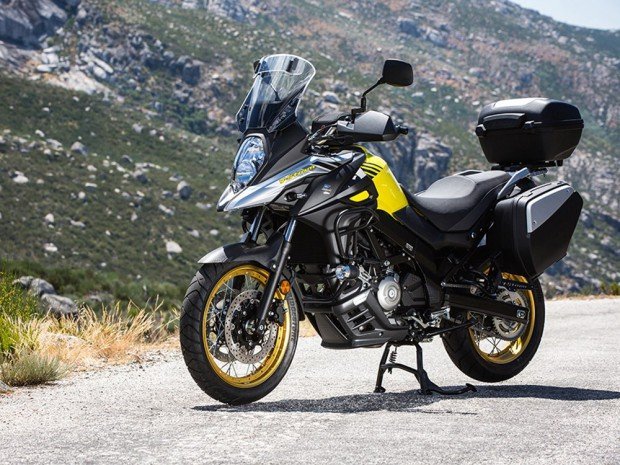 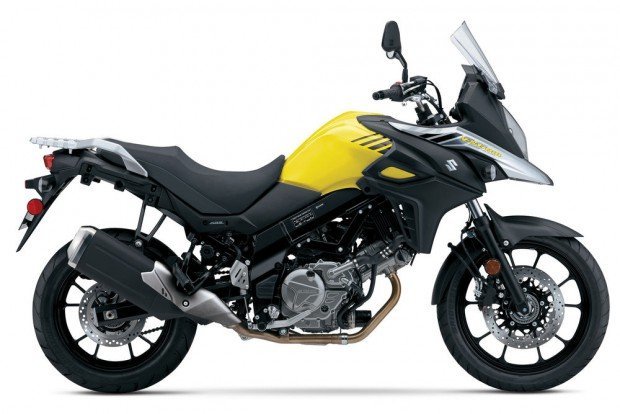 And the cast-wheeled non-XT version.

More info can be found HERE.