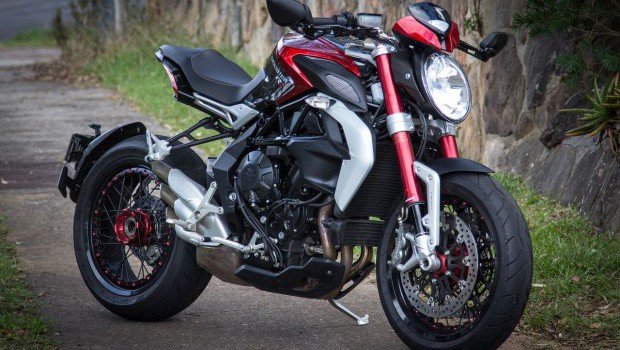 Just look at it. 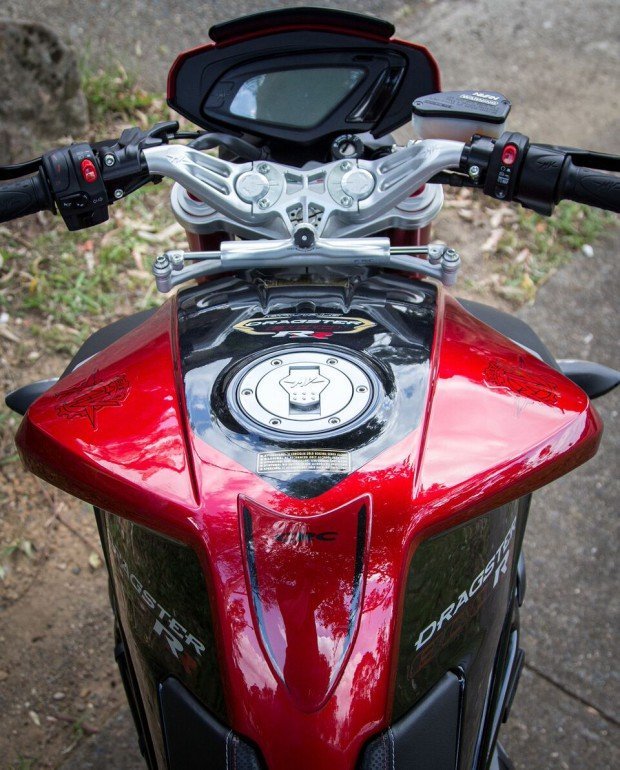 You might have seen me at the Sydney Bike Show next to the MV stand. I was the one with the slack jaw and the tent in my pants.

If I behold it long enough I run out of descriptors and resort to swearing. The good kind.

Still, one has to wonder what it’s like to ride. 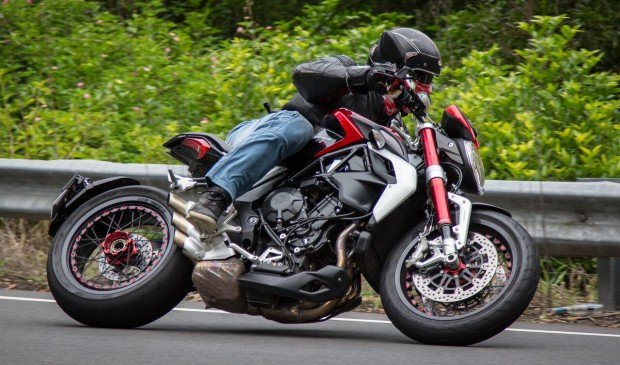 Because if it disappointed in that area, then there would be more swearing. The bad kind.

It would be like admiring a Victoria’s Secret model on the runway, then suddenly finding her in your hotel room, all sparkle-eyed and ready to slurp…and then discovering she tastes like an old jackal, smells of turpentine and you’d have more fun straddling a rolled-up floor rug.

The all-show-but-no-go paradigm. Molto deludente, as the Italians say, despite the fact that you can still fap to it.

Now I am no stranger to MV Agustas. I am, in fact, a bit of a fan boy.

I had a long-term F4 some years back. It was the only bike I’ve ever ridden to more than 300km/h (indicated). I commuted on it. I toured on it. And I put more than 20,000km on it, much to the surprise of myself and the MV mechanics who were servicing it. It remains the only real-life long-term test of the F4 that I am aware of anywhere on earth.

I have ridden several Brutales and I put some miles on them too, and I spent a very happy evening with Brother Silverback hammering a race-piped 750 Senna up and down the Putty Road until the werewolves came out.

The bikes were not without their issues.

The F4 cooked me like ham in traffic and crippled me with ergonomic cruelty.

I loved it anyway.

The Brutales were more comfortable, but had strange electronic glitches and one in particular kept shedding its number-plate, which in retrospect was probably a good thing given the shit I was getting up to on public roads back then.

I loved them, as well.

More importantly, they made me feel very special. 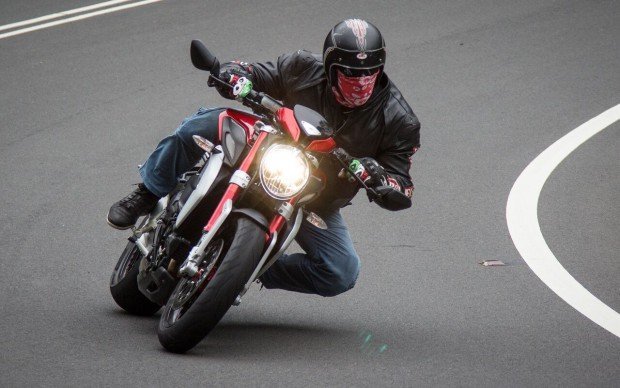 Here is me felling special.

They were compromise-free. They were angry; pure and venomous – which, by extension, made me, the rider, feel like I was riding somewhere beyond the herd; even if I wasn’t in terms of actual riding skill.

It didn’t matter. Pretty girls would smile winsomely at me as I sat in traffic roasting like an almond. Blokes in cars and trucks would tell me I was riding the sexiest bike they had ever seen. Wherever I parked an MV, people would stop and stare at it and ask me enviously if it was mine. Of course, I would lie to them and tell them it was. They would then nod and smile and tell me it was beautiful, implying that I was a man of great good taste with divine mastery of my universe. 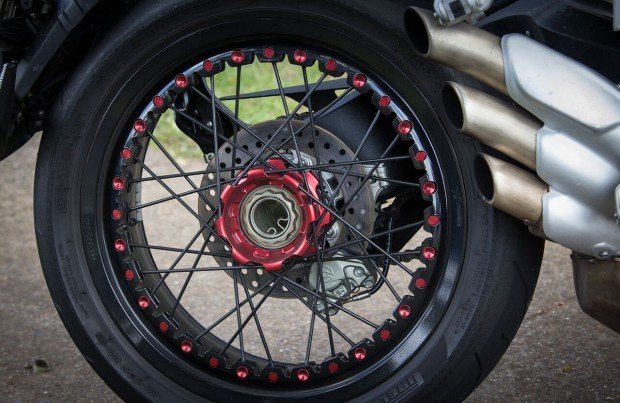 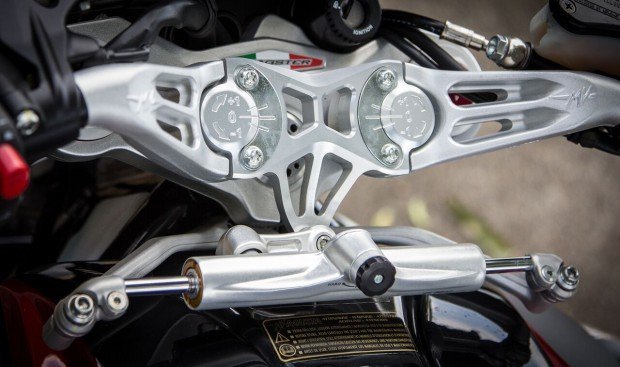 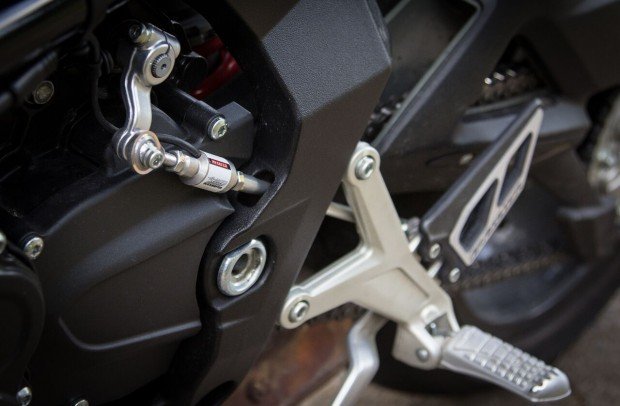 For shifting with power.

No other sportsbike or naked ever had (or has) the same effect on people who know nothing about motorcycles.

Fellow motorcyclists, most of who had never ridden or will ever ride an MV, were likewise overcome with admiration.

There’s just something special about an MV Agusta – some ineffable cachet that transcended other motorcycles.

A year or so ago, MV Agusta decided it wanted to splash in a smaller capacity market and introduced its in-line three-cylinder engine. So it built a triple that out-tripled all other triples.

It also created what is arguably (and you can argue all you want because it will fall on deaf ears) the most stunningly beautiful naked bike on the market today – the Dragster RR.

But, and this is a big but, not only is the RR stunning to behold, it is actually quite magical to ride. This, I discovered when David Wooju Song from Moto Tecnica (Sydney’s MV dealer) gave me one for a week. I guess if you follow someone around the Sydney Bike Show for long enough, crying tears of desire loud enough, you get results. In the end, David gave me the bike to shut me up. My tears dried upon the instant and I went back to following promo girls around. 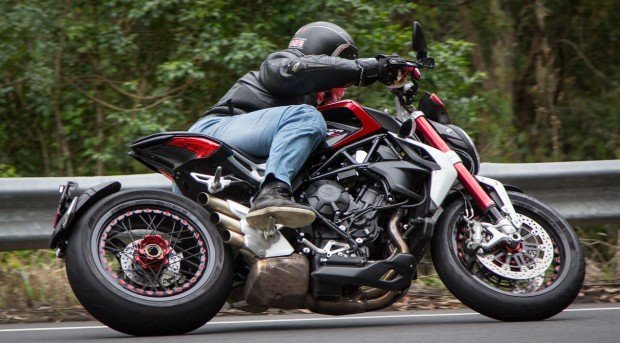 A few days later, I was riding away from the bike-porn shop that is Moto Tecnica on the red-and-black RR (there’s a red-and-white version too), and feeling very special-sexy.

It is small. It looks small and feels small when you climb on, but it’s not cramped. Somehow, MV have taken the already compact Brutale and compressed it even further. It took me some time to wrap my head around how compact it is. The ergos were good, it’s just that the bike itself felt tiny and light. Similarly, black holes are much smaller and more condensed than the giant galaxies they swallow. There is a very large amount of bang in the RR’s relatively slight package.

And what an engine it is. I would not even consider buying the not-the-RR Dragster (and not just because the wheels are cast and not spoked), which is 15 horses down and a few injectors short on this jewel; this rev-geysering scream-fest is a delight of smooth, useable power that is just exhilarating to play with. It’s perfectly fuelled, with none of the hunting the bigger and earlier models were afflicted with at low speed. Throttle response is immediate, like good vengeance. 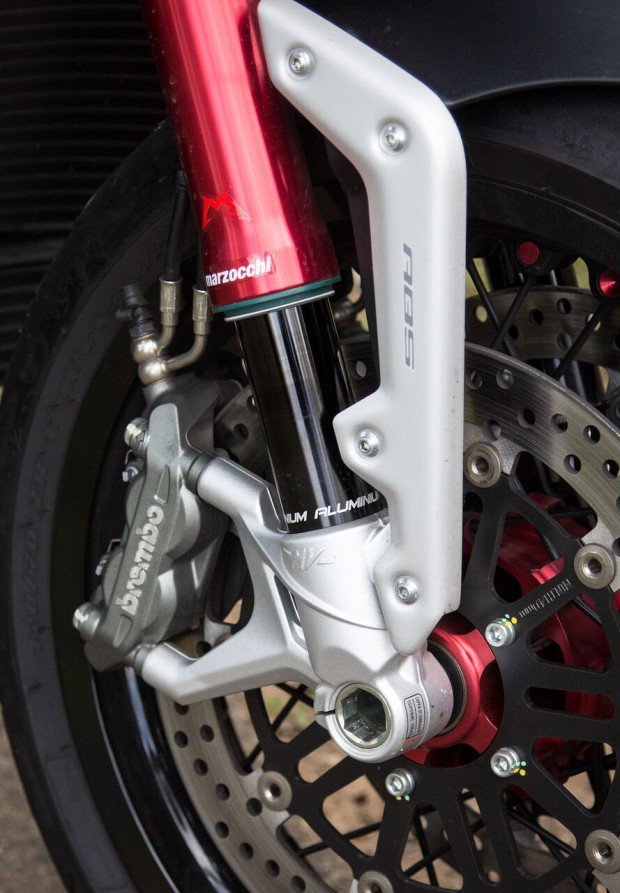 The details are stunning.

Couple it to an outstandingly precise and smooth gearbox with an up-and-down quickshifter, and you have thrill made incarnate. It’s quite the howling madman-motorcycle of your dreams.

The front wheel is under your sternum, your girlfriend is either a child of 12 or following you in her car. It steers as quick as thought, despite the fat back tyre, and the wide flat bars and steering damper all contribute to make that fast steering a pleasure rather than a question.

It comes with four engine modes and an eight-setting traction control, and great, useable road-friendly suspension (at last!). It is on the firm side, but at no time did it get jittery or cause me to pee from my bottom in fright. The RR tracked sure and true, every time. 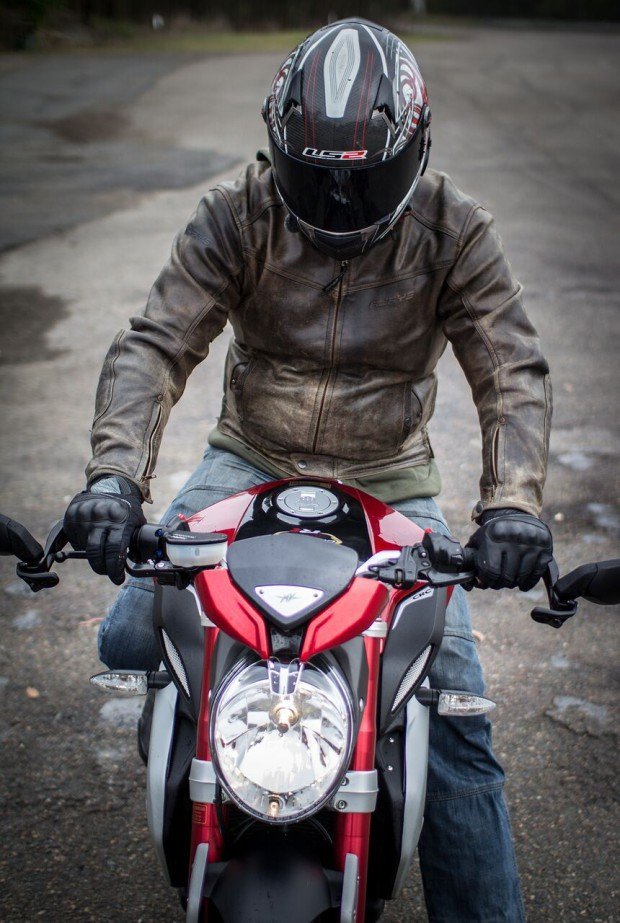 I even let Boon ride it. Just to watch him smile.

Yeah, it’s got issues. Of course it does. Perfection is not given to mortals lest they become arrogant and grotesque in the merciless eyes of the Road Gods.

The bar-end mirrors make it awkward (and expensive) to lane-split, which is annoying because the bike itself is razor slim. But they do fold in, and there’s a road-variant of the MotoGP-style front brake- and clutch-guard curled around the front of each, and that’s kinda cool. 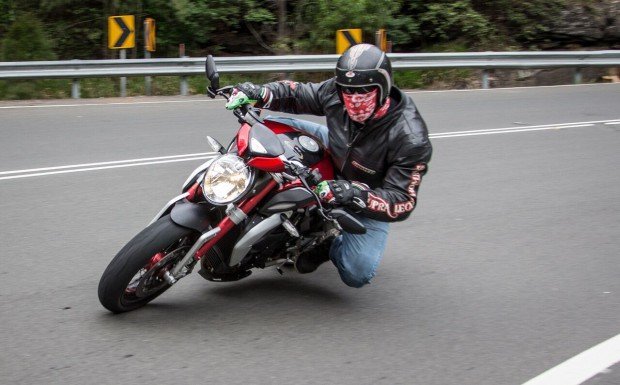 It’s just a joy to swing through corners. 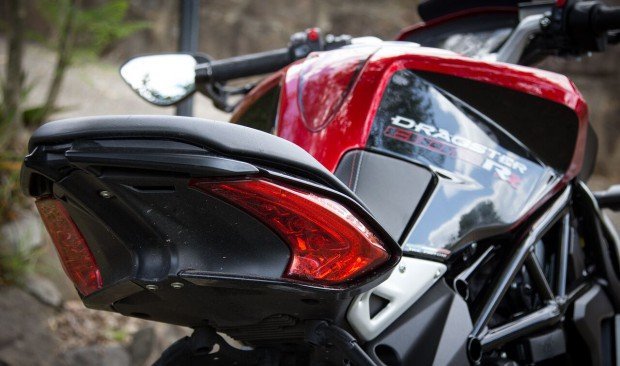 Be a bit hard to French some blinkers into there.

The dash is complicated and hard to read. Much like some women I have known in my time. I still went out with them, but – because they looked really good in bikinis. If all you care about is the speed you’re going to jail for, you’ll be fine. But if you need to peer at the other info for any length of time, best you pull over and stare at it.

There have been unkind words said about the mudgaurdy, cockroach-looking thing that hangs astern of the rear wheel – which is itself a work of art worthy of hanging in the Louvre. And yes, from an aesthetic point of view, the black scab jars the eye. Sadly, it’s not just a matter of hacksawing it off and throwing it into the street. The blinkers live in it. Happily, there are tail-tidies available for the Dragster, but it will not be a cheap thing to do. Still, if you’re buying MVs, then you’re not about cheap, are you? Personally, I’d leave it there. It would be like Cindy Crawford’s face-mole – a slight imperfection that actually enhances her glory.

I rode the RR for a week. In that time, one of the tail-lights recessed into the tail-piece ceased to tail-light. The other one worked fine, but the dashboard duly informed me there was a tail-light malfunction.

Did I really care about any of this?

Not really. I’m just telling you what’s what. There are leading experts who wouldn’t, but that is a matter for them. 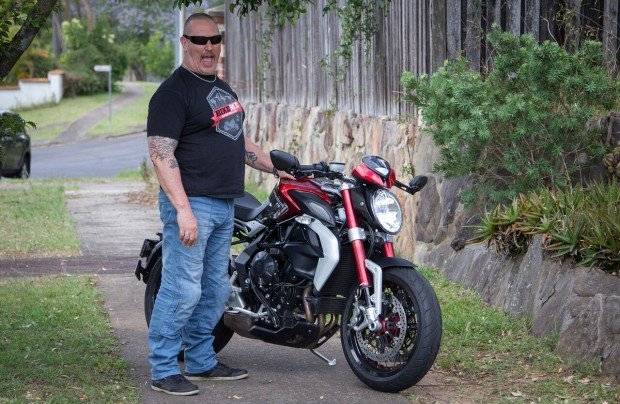 Now that I have you alone… 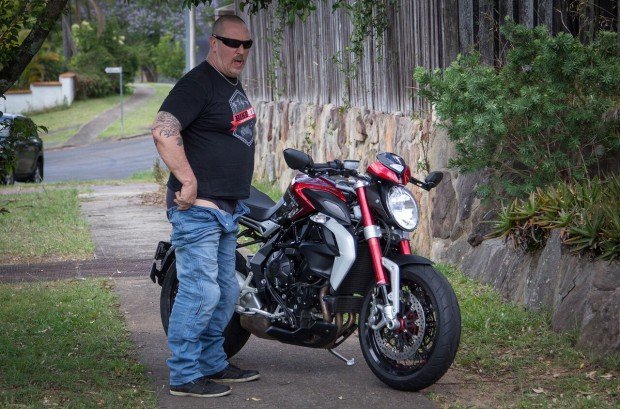 …it’s time to take my pants off.

I loved the RR. It’s special. There is an even more special variant of it, called the Dragster RR LH44 (after Lewis Hamilton, the Grand Prix driver), which comes with more exotic bling than a Russian trophy wife, but no added performance. That should not stop anyone from buying one of the 244 signed and hand-crafted models for a nano-second. I certainly would if I could rob enough servos. 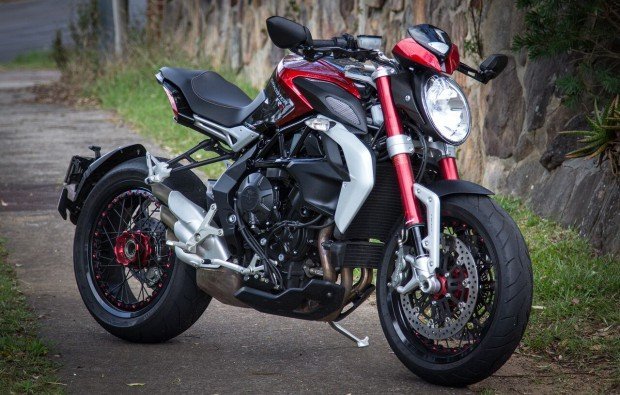 I will respect you in the morning.

For mere mortals, the RR is certainly more than sufficient. It’s unique in so many ways, but its looks are the clincher. It is simply breathtaking. I could forgive it so very much more than the few little niggles it has if it performed half as well as it did.

Given the way it does go?

One requires no brain at all to get the Dragster RR’s transcendental siren-song.

It is, quite frankly, one of the most inspiring and exciting motorcycles I have ever ridden.