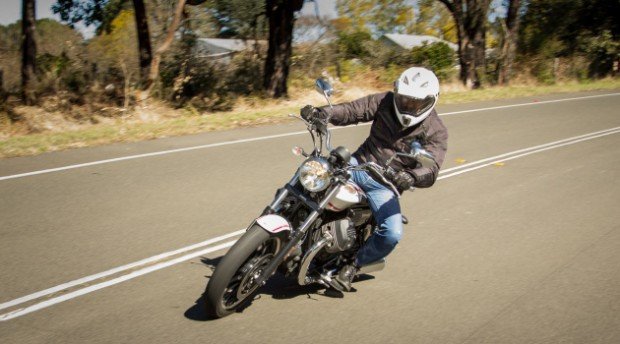 Back in 1967, the engine was air cooled and had two valves per cylinder, operated by pushrods. It still is in 2016. You like retro? Step this way, sir. Moto Guzzi have your bike.

The V9 Roamer’s 853cc engine looks similar to the old units, but it’s mostly new. It doesn’t make that much power, because air cooled engines that make power don’t pass emissions tests in 2016, but it makes a bunch of torque from, er, I don’t know, because it doesn’t have a tacho. Pretty low. Maybe 2,000 rpm. And it keeps making it until, er, until it runs out. 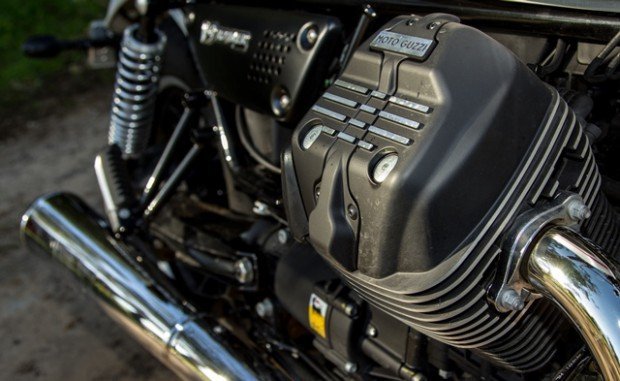 Guzzis always seem more mechanical than other bikes for some reason. They have that “everything on the outside” steam engine attraction. Even car-heads look at it and know where the clutch and transmission are. They make a bit of gear noise, which I actually quite like. Apart from the heat shields at the rear of the cylinders, there’s pretty well no plastic on the Roamer. The mudguards and side covers are metal. It looks and feels solid and metallic and mechanical and old school.

It’s easy to ride at low speeds. It weighs less than 200kg dry and it has a low seat height. It does that Guzzi torque reaction thing when you start it and when you blip the throttle. The fuel injection system is very good and the bike is smooth and responsive about ten seconds after a cold start. It’s geared a little tall, like every Moto Guzzi, but the torquey engine has a heavy flywheel and it’s hard to stall. The transmission makes a bit of a clunk every time you change gear, but apart from that the gearbox is fine.

The single speedo has eight warning lights and an LCD display. A button on the left switch block lets you flick between odometers and clocks and fuel consumption readouts. 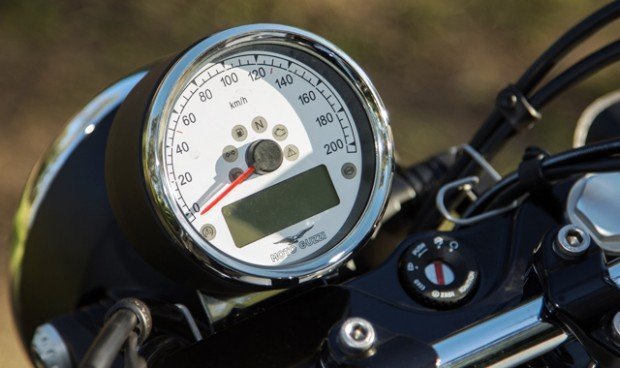 The brakes are Brembos: one disc per wheel. They stop the bike fine. Having a single disc at the front keeps the weight down. Both brakes are monitored by a two channel Antilock Braking System. 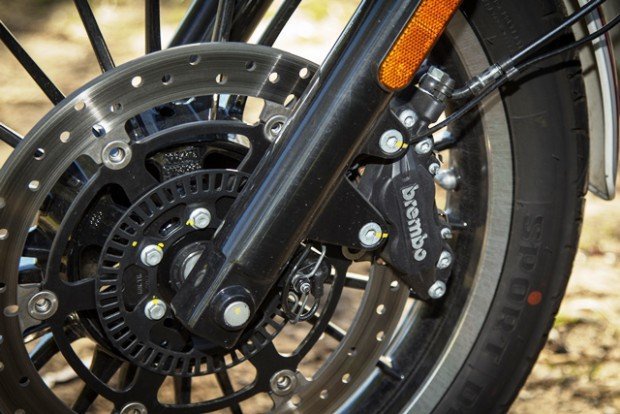 Single Brembo with ABS is more than adequate.

The steering feels solid and stable thanks to 125mm of trail, but the short 1465mm wheelbase quickens things up a bit. Suspension is basic: 40mm conventional fork, twin shocks. The only adjustable part is rear shock preload.

Moto Guzzi’s advertising emphasizes the bike in urban settings, and that’s where it shines. Stuffing it into a bumpy corner at high speed doesn’t work that well. The suspension loses control and the tall sidewall on that 150/80×16 rear tyre flexes, and the bike moves around. It’s not horrifyingly scary, but a reminder that you are exceeding the design brief. 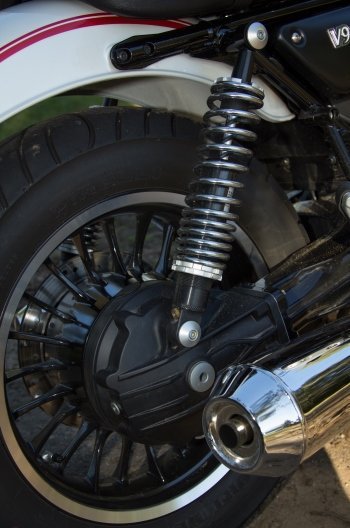 Twin shocks are adjustable for ride height only, shaft drive has two universal joints but no anti-jacking parallelogram linkage.

Not only is the seat low, the footpegs are too, and they are the first things to touch the tar on either side when you lean it over.

It’s not a bike for long trips. Your shins rub against the plastic bits at the back of the cylinders, so you either splay your legs or ride with the balls of your feet on the footpegs. 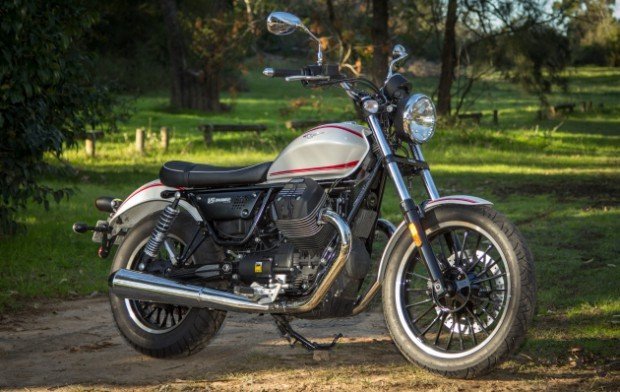 Exhausts are low but tucked in, footpegs touch first in turns.

No, it’s a city bike. It’s for the commute, the weekend run to the suburbs and maybe the occasional hundred kilometre country run. It’s low maintenance due to its shaft drive and minimal number of valves, and you won’t get chain lube on your clothes.

The other thing Moto Guzzi emphasizes in their advertising is accessories. “Born to customize”, the web site says, and it offers leather bags, racks, flyscreens, billet levers, metal grips, bar end mirrors and all manner of bling to dress your Roamer. Why? Because the only thing that counts out there is what you are within, according to the accessories brochure. It probably makes more sense in Italian. The real reason is probably that BMW sold a bunch of R Nine T accessories, and Moto Guzzi want a piece of that action.

Other high tech hiding under the retro style includes a USB connector on the steering head to charge your mobile devices, and the Moto Guzzi Multimedia Platform. This last comprises a Bluetooth sender and a smartphone app, and lets you use your smartphone as trip computer and tacho. 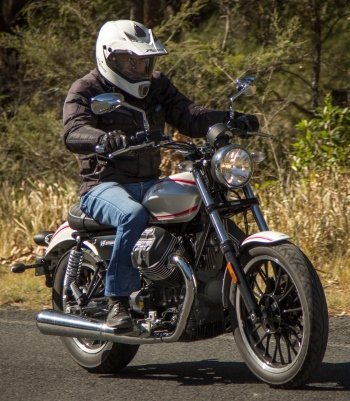 Ideal commuter and perfect for relaxed bend-swinging on the weekend.

That is the Roamer. Simple engineering, classic good looks and an engine that hasn’t changed a lot in fifty years. Low maintenance, but modern conveniences like ABS, fuel injection and electronics. A canvas for you to customize, and customization will be less painful because the parts come out of the same factory and will fit first time.

Last but not least, you can ride away on a new one for $16,500. That’s over $5,000 cheaper than the customizable German twin. If you’re after a bang for your buck Eurobike, the V9 Roamer is well worth considering.