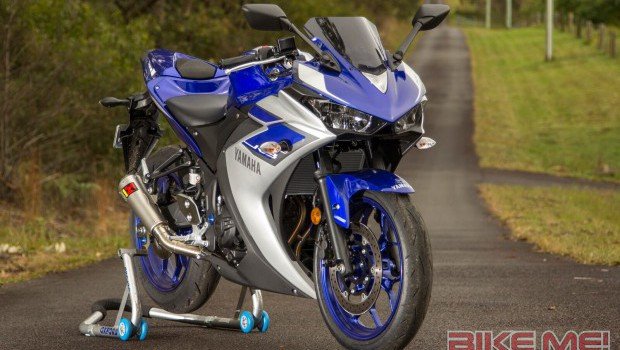 I need to get out more often.

It’s arguably one of the very few classes of bike one can actually ride to their very limits, wring their necks, and emerge smiling and without major bone surgery at the other end. 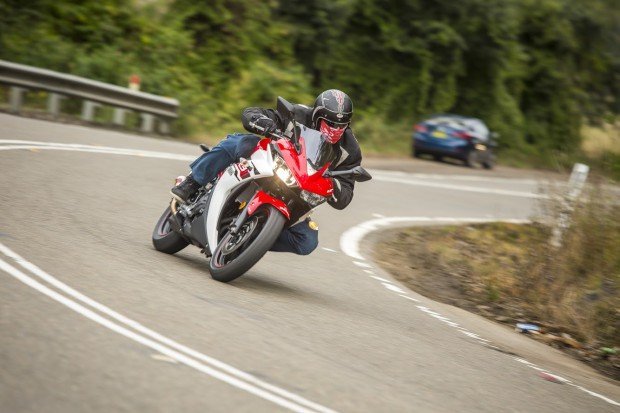 I think the photographer wanted me to crop his car out of this image. 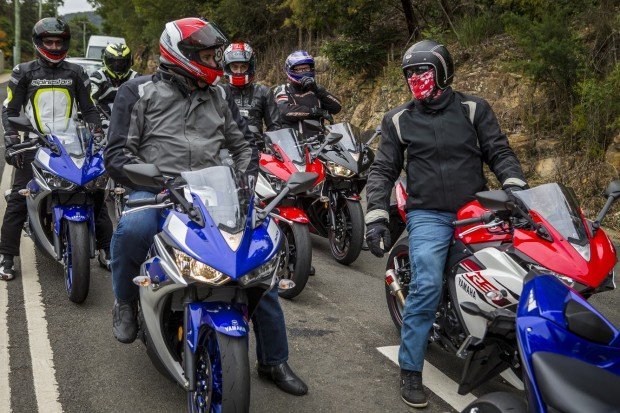 It’s like an L-platers’ ride. But with more swearing, slip-streaming, screaming and terror.

And while there is much to be said about belting around the country on uber-powerful motorcycles with every conceivable light, buzzer and rider’s aid all conspiring to keep you from being poured into a bag, I think there is a good deal to be said about a brilliant little bike, that is simple, honest and buckets of fun to ride.

Behold the R3 – Yamaha’s entry into the hotly-contested LAMs market.

Which is actually not all that hotly contested when you start to pick it apart a bit.

With the advent of the brand new R3, that may well change, and it should. 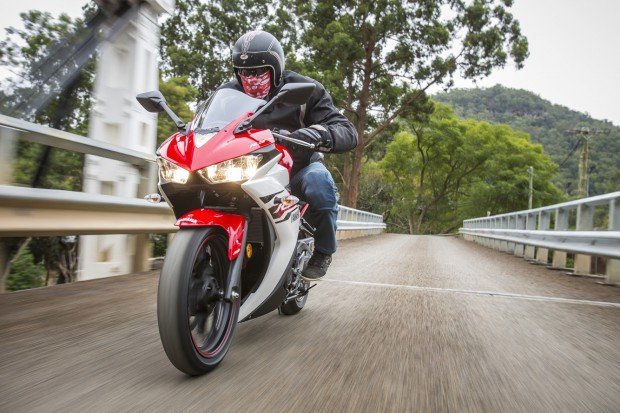 I was pleased my scarf matched the bike. Style is important. 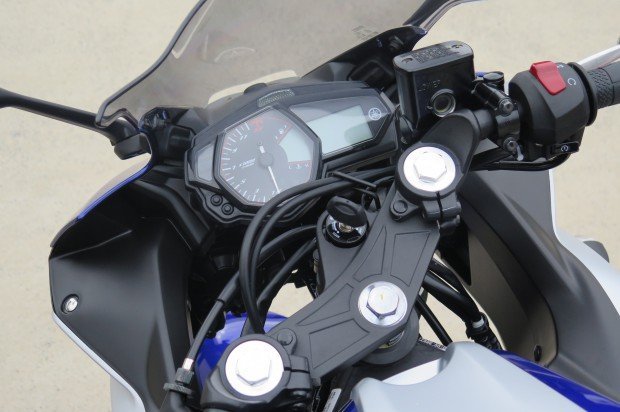 Simple, basic and informative. No, you don’t need four engine maps. You’re on your Ls. 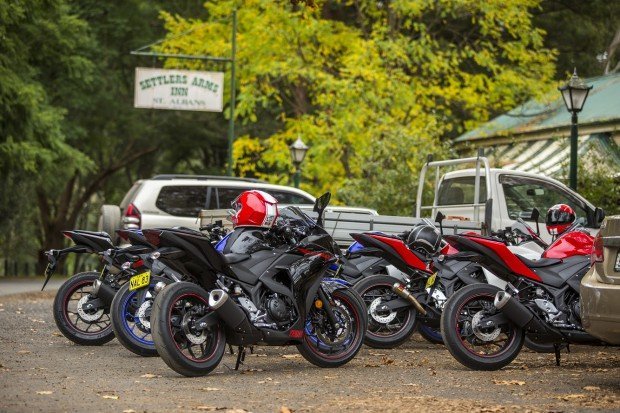 The black one was fetching and slimming. 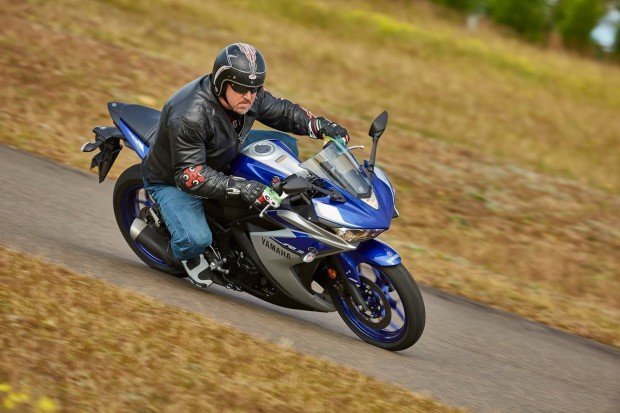 Oh look! A private racetrack and my leathers are at home.

Prior to the R3’s arrival, a Learner who actually wanted a new sports-focused bike that acted like such a bike should, and would actively assist in honing his (or her) craft as a rider, had the following to choose from: Kawasaki’s Ninja 300, KTM’s RC390, and Honda’s CBR300 and CBR500.

Well, yes and no. The CBR300 was a little underdone in the engine department and was more commuter than sporty. The CBR500 was a fat-chick version of the 300 and also lacked any sporting pretensions. That left the KTM and the Ninja to address those crazy head-places all teenagers have.

The RC390 is a serious bike, with a great motor and a massive mid-range. It is a single, after all. It handles once you sort out the soggy back shock, but remains a very narrowly focused, weapons-grade, motocrosser-turned-road-bike, that vibrates, has a brick for a seat, a shift-light that will blind you, a sidestand you’ll struggle to find, and a host of niggles that can put off new riders. Sure, there will be some new riders that will rise to and above the challenges the KTM presents, and that’s great, but it’s not a bike that welcomes Learners with open handlebars. 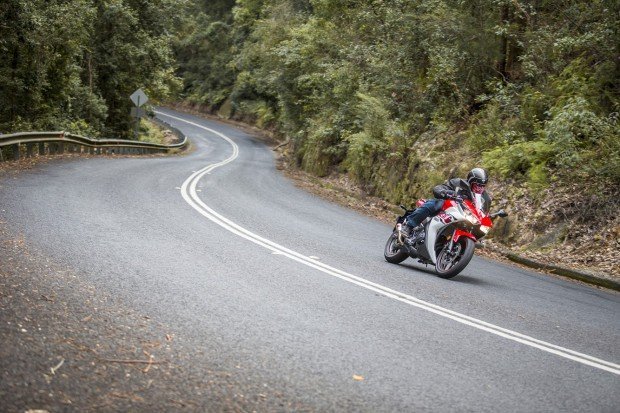 Singing the song of my people. Albeit quietly.

That brings me to the Ninja 300 – a hugely popular and able LAMs motorcycle, which has been putting smiles on teenage dials since its debut. It is, and Yamaha make no bones about it, the bike it’s aiming to compete head-to-head with in the marketplace.

So how does it compare?

So there’s not all that much bloodshed in the specs box.

What it therefore comes down to, and will always come down to in the mind of every 17-year-old L-plater, are a few very, very crucial things. So if I was an L-plater, this is where I would be paying attention to the old fat bastard with the non-trendy tattoos…

Yes, I know, I’m not a 17-year-old L-plater. I made my 17-year-old bones on crazy 1100cc motorcycles that didn’t handle very well, but went very fast. So it’s fair to ask how my opinion of the R3 could possibly matter to a 17-year-old.

Well, it just so happens that I’m still very much a 17-year-old in the head. We vary only in the skills department. 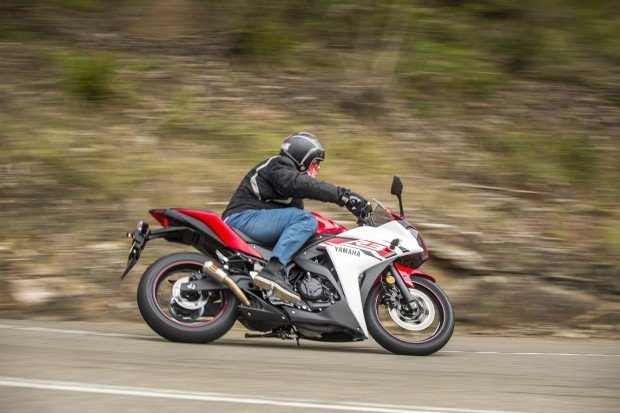 It was just like the Isle of Man. Just slower. 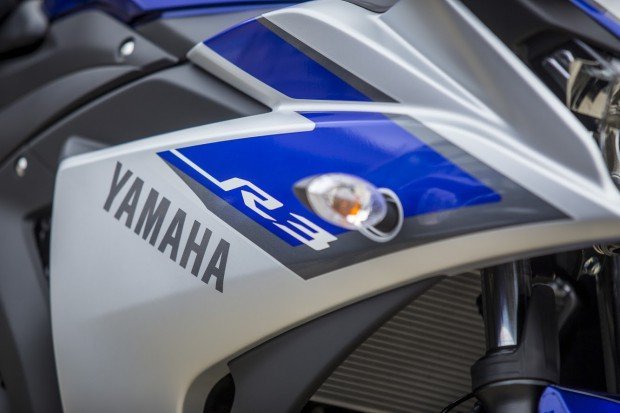 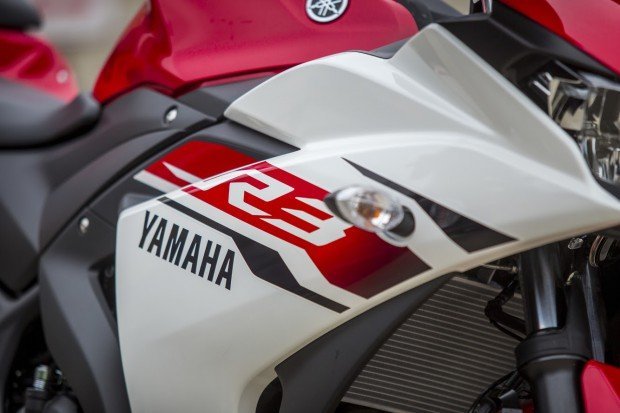 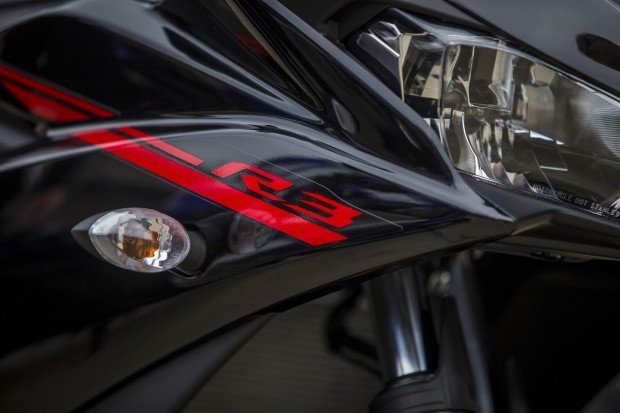 I loved the black, too.

I’m just as keen to ride as when I was 17. I salivate just as much over bikes. Every ride is a test of manhood and a display of skill.

The very same things that motivated me to ride back then motivate many L-platers today.

Or at least they should, because teenagers don’t really change. Granted, there are a bunch of them fluffing about the place wondering if motorcycling is really for them, and they will doubtlessly keep wondering that for years to come as they strive to inject the bastard called “safety” into an inherently dangerous occupation. I cannot help them. Nor do I want to. They are beyond help.

But to those teenagers who already know, on a genetic level, that motorcycling is all they ever want to do, and bikes are the only things that can make them sane and whole and right…well, them I can help.

Provided they ask the right questions. And here they are. 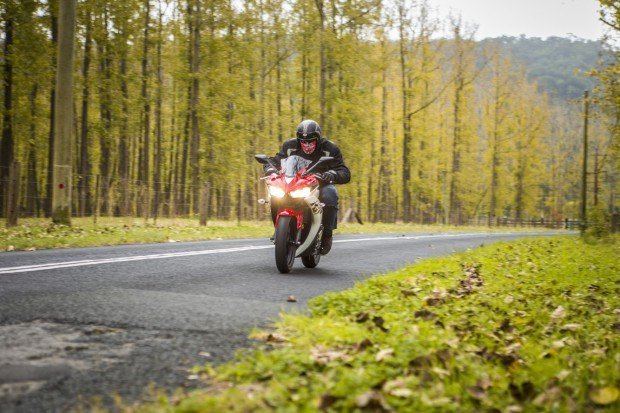 If you’re wondering why both my headlights are on, while all the other press shots you see show only one light, it’s because I had my high-beams on all the time.

Firstly, and most importantly, does the new R3 look cool?

Yes, it does. Even for such a subjective call, there is no question, the R3 is a looker. From the front or front three-quarters, it looks like a grown-up motorcycle. You could even lie to people and tell them it’s an R6. If the girl is really out of it, you could tell her it’s an R1.

Do girls think it looks cool?

Anecdotal evidence, backed up by social media squeals, would suggest they very much do. “That’s hot!” has been placed on statuses by some rather pretty girls.

Can I make it sound awesome?

Yes, you can. In fact, Akrapovic makes three different dedicated muffler set-ups for the R3.

The sexy MotoGP-looking one is $420 and the tri-oval carbon-fibre can is $649. They both add about a horsepower and a nice raspy note. Or get serious, spend $849 and get a full Akrapovic race system. It weighs five kilo less than stock and adds maybe one-and-a-bit horsies and torquies. 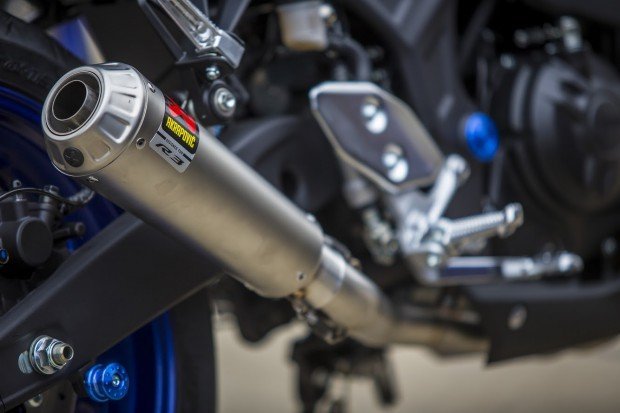 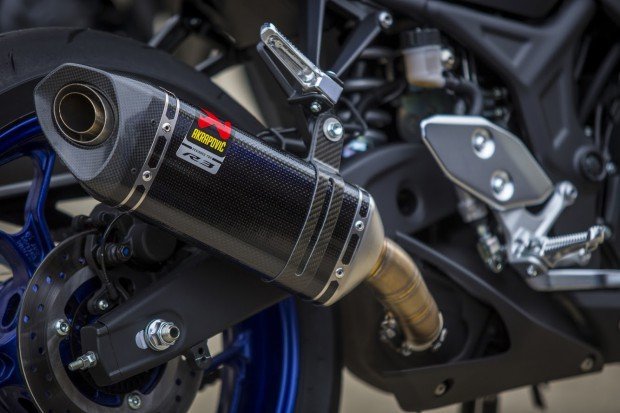 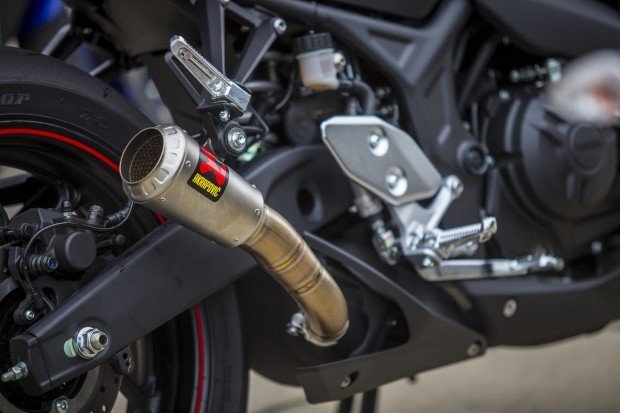 Quieter than it looks, and it looks as superb as it should.

Oh yes. Better than you can ride it, in fact. I spent two days with middle-aged men, some of whom had raced MotoGP and won Superbike titles, and I’ve gotta tell you that if the R3 did not handle, we would have known. The fact is, it did. Magnificently. This is due to its balance (almost a perfect 50-50 split front and back), fat 41mm forks (the fatter they are, the more rigid they are, kiddies, and rigidity is a desirable thing in a fork), an adjustable-for-preload rear shock, hollow axles (any reduction in un-sprung weight is a good thing), and a steel diamond-type frame that uses the motor as a stressed structural member. It’s very agile, but stable in corners and despite its light weight, it’s not all that easy to unsettle even if you’re doing crazy stuff…um, like downshifting from sixth to second in the space of 10 metres and throwing it into a hairpin. ABS is standard, and you will give thanks to the Baby Jesus it is. I did, and I don’t even believe in the Baby Jesus. 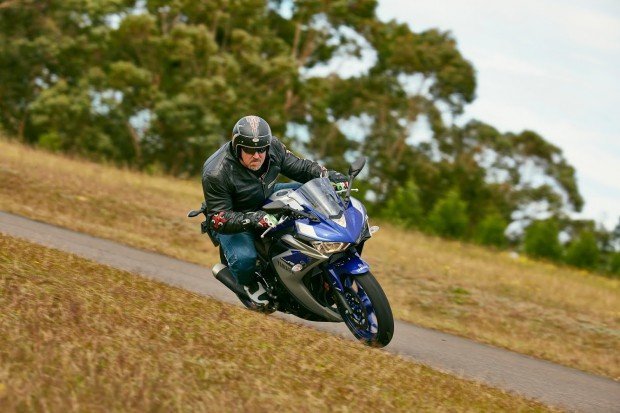 “Must not put knee down in jeans…”

It’s a Yamaha, dickhead. You could leave it to your kid in your will. It has forged aluminium pistons just like the R1, known as DiASil units. Essentially this is the world’s first all-aluminum die-cast cylinder. It achieves cooling performance equivalent to that of a nickel-plated cylinder, which is currently recognised as the best there is. The piston is also offset by 7mm, so there’s less friction as it goes up and down. This means better fuel consumption, and a crazily smooth-revving motor.

Is it cheap to run?

Fuel economy is outstanding. You’ll get about 56 miles to the gallon. That’s really, really good. Tension the chain now and again, keep her oil fresh and try not to pitch it into the back of a truck and it will see you out of your L-plates with good re-sale value. 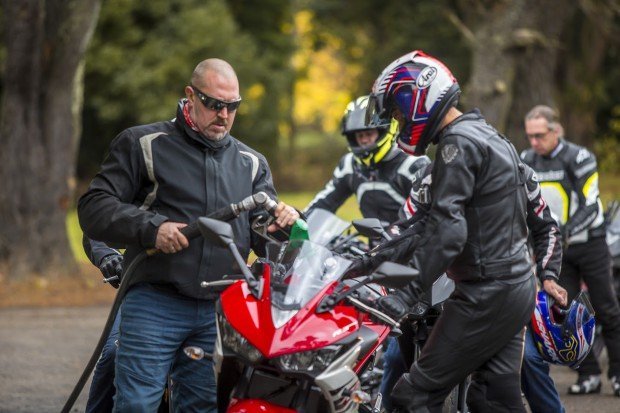 I am a river to my people. Of petrol.

Wrong question. The question you need to be asking is, “Can I beat the rider of a Ninja 300?” And there’s only one way to find that out.

How fast does it go?

I got it to 168km/h. But I am old and large and relatively fearless. But I am unprepared to be killed by a baby motorcycle. You, on the other hand, might get to 169 or even 170. 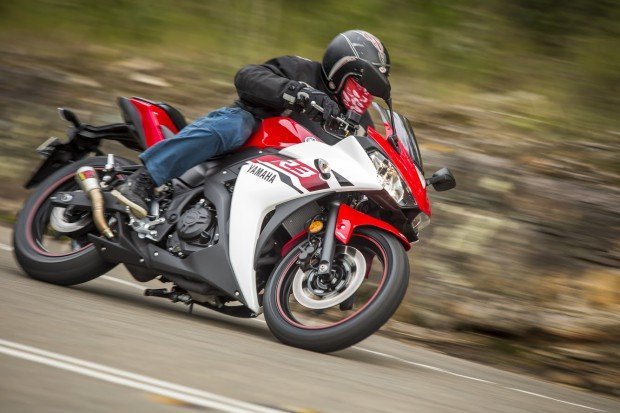 One would think one was speeding if one didn’t know better.

The Michelins are perfectly fine for what you’re gonna get up to. I spent most of the launch, as did the other old blokes, belting around on Dunlop-fitted R3s – it was a stickier tyre and made us feel better about ourselves and our age. 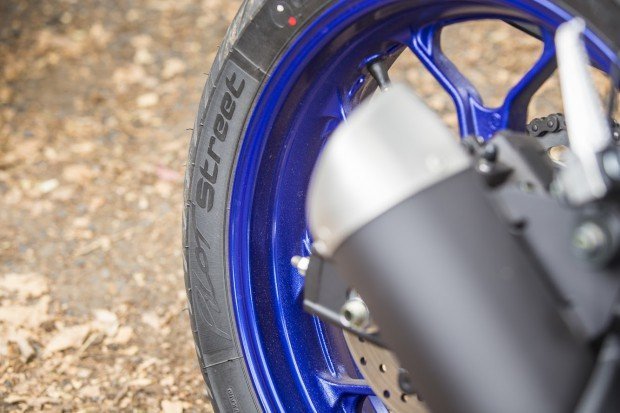 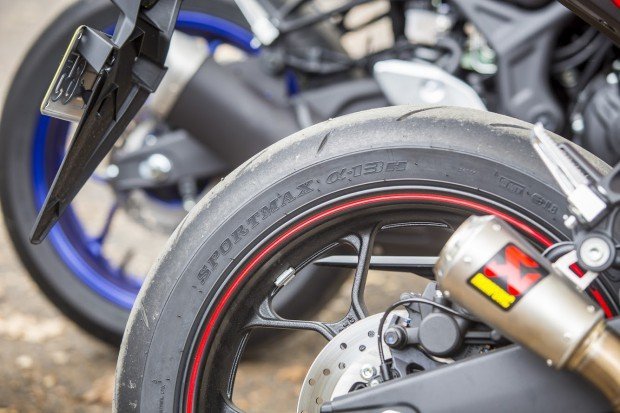 Are the brakes good?

Yes. ABS is great. I am living proof this is the case because had it not been for ABS, I would have hit a big black cow ten kays out of St Albans and probably died.

What colours does it come in?

What kind of bling can I get for it?

Quite a bit. A rear seat cowl ($262); it’s not like you can carry a pillion anyway; frame sliders ($253) in case you drop it on its side they’re a good idea; sports screen ($160)– shorter, smokier, stylisher; rear seat bag ($298) – expanding bag that sits where the pillion would if you were allowed to have one, but you’re not, so this is not a bad trade; tank bag ($160) with a smartphone-compatible touch-panel which you must never touch while you ride lest you appear in a newspaper and on social media and be branded a “fool”; tank pad ($88) for carbon-fibrey lookalikeness; rear rack ($249) which allows you to fit a top box…though why you’d want to fit a top-box to this kinda bike is beyond me. But you can if you want. Just don’t be surprised if people laugh and point; fork cap set ($88) in four different colours for pure blinginess; steering-stem nut cover ($64), yes, more alloy bling because shut-up; There’s also a swingarm pivot cover ($75) and race-stand spools ($68) for the complete bling-it-all.

There are also LED rear blinkers, garage mats, bike covers and the aforementioned top-boxes available – so while it ain’t the Harley catalogue, it’s not bad if you just wanna add a bit of bang to your bike. 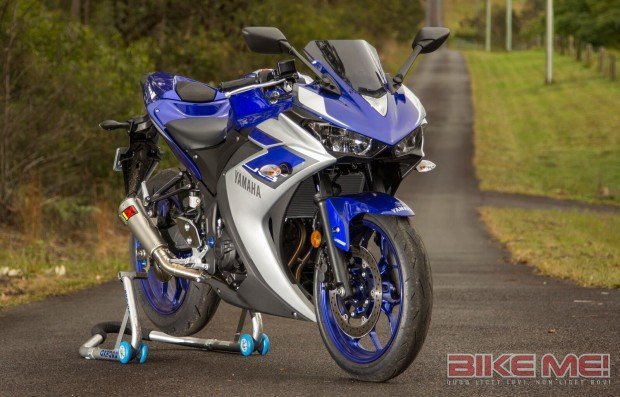 This is the fully blinged one.

Will I still love this bike six months after I buy it?

Yes. If the R3 can put stupid smiles on the face of jaded, middle-aged men who’ve all ridden more bikes than they can remember, it will certainly amuse you well into your learning years.

It’s a bike that can be ridden hard, even by experienced riders, and it will deliver the happiness, while it delights in a measured and smooth approach. It will also forgive you your trespasses as a beginner. And make no mistake. There will be some of those.

From my perspective, Yamaha has just kicked another goal. It has effectively book-ended the sportsbike market with the spectacular R1 at one end and the delightful R3 at the other end.

Makes me wonder how interesting the new R6 is gonna be.