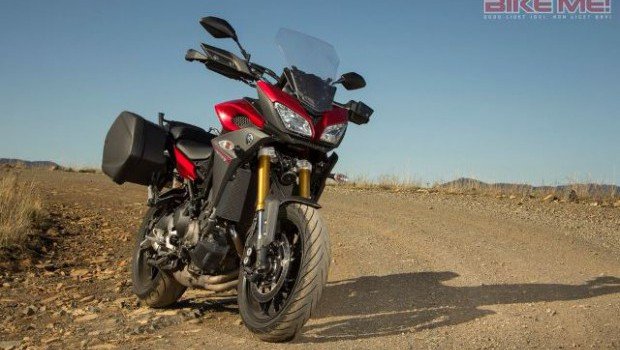 I wasn’t quite sure what to make of the Yamaha MT-09 Tracer the first time I saw it. It has Dunlop Roadsmart touring tyres, and a 17-inch front wheel, and it has barkbusters. And its barkbusters have barkbusters. No, really. The name didn’t help either, but I guess if you really have to name motorcycles after ammunition, “Tracer” is probably better than “Ball”.

It has side bags, which is good, because hard luggage rocks. I commuted with it bagless for a few days. The engine is magnificent. Triples always are. When I was a kid, the waterbottle and the H1 and H2 Kawasakis had magnificent triple motors, and this century, Triumph and now Yamaha have magnificent triple motors. The MT-09’s crossplane triple is narrow and torquey and glassy smooth and sounds good. The engine has three modes, “STD”, “A”, and “B”, selectable by a switch on the right handlebar. I couldn’t detect that any position made any difference to anything.

The riding position is good for commuting. Footpegs are low and set back, so they are under your butt. The tapered handlebars are wide, which makes low speed manoeuvring easy, although they do limit the gaps you can go through. It feels a bit like riding a big fast trail bike, not the least because it’s very narrow. Its seat is tall at 845mm, and it weighs less than 200kg dry. Despite the tall seat, I could flat-foot the ground okay because the bike is very narrow behind the tank. Even clipping on the bags, it’s not too wide. I forgot I had the bags on a couple of times and lane-filtered through some narrow spots, but didn’t scrape any cars. 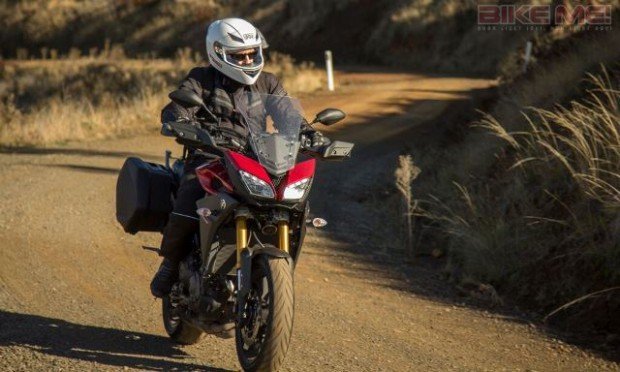 You do want to play with that engine, though. The last two triples I rode, the Triumph 675 and the Yamaha MT-07, likewise tempted one to ride like a hooligan. It has a nasty rasp under load that makes the hairs on the back of your neck stand up.

There are some knobs behind the windscreen, so I took the pillion seat off and had a look for the handbook to work out what they were. There was a screwdriver handle, a screwdriver to go in it, and a rusty allen key clipped under the pillion seat. I was surprised at the rust: Yamaha are usually second only to Honda in quality of finish, but the allen key probably wasn’t made by Yamaha. The handbook and toolkit were missing. There was a rubber block with an arrow pointing forward. I tried pushing it forward, but it didn’t move. A few minutes later, I found that you could lift the rubber block out, and forward of it is a lever which you can move sideways which releases the operator seat. There’s nothing under that, but when you replace it you have a choice of two mounting points at the front, one of which is about two centimeters higher than the other. I didn’t know what setting it was on when I removed it. I put it back on the lower one.

There was a plastic bag under the seat which contained a lock for the optional top box. The rack for it was fitted to the press bike. It has lots of tie down points for ocky straps, and it was no problem to load a tent, an inflatable mattress and a large sleeping bag on it. 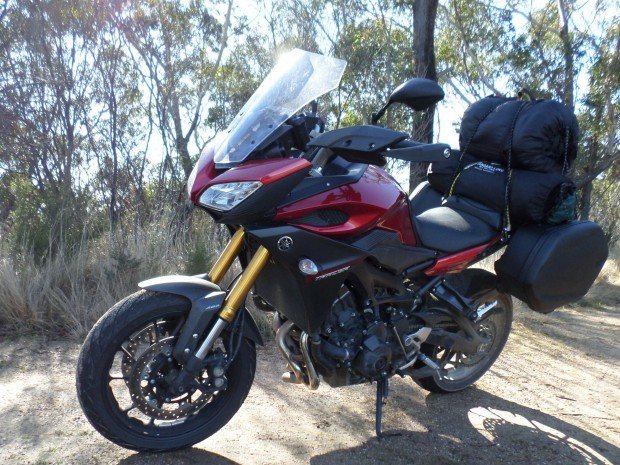 Lots of tie-down points, for when you want to get your gypsy on.

I worked out that the knobs were to adjust the windscreen. I adjusted it to the highest position and headed out of town on the motorway. The instrument package is off the big 1200 Ténéré. I worked out the instruments on the way. The rocker switch on the left changes between odometers and temperature and fuel mileage screens and such. The slider on the right changes engine mode. The bottom button on the instruments resets the trip meters. The top one turns off the traction control if you hold it down for long enough. The clock was an hour fast. I couldn’t work out how to adjust it.

It’s as good as any other motorcycle on the motorway. If you ride with the balls of your feet on the pegs, the swingarm rubs your left boot when it moves against the suspension. My VFR does the same thing, and I find it oddly comforting. Yes, I did say oddly. Shut up. 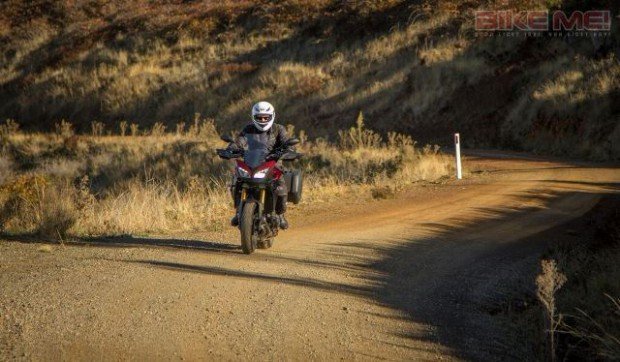 Heading over the Blue Mountains was a delight. The light weight and punchy 115bhp engine are complemented by a rigid chassis and well-damped suspension. The forks are the same as the base MT-09 (41mm upside down Kayabas) with the same spring rates, but compression damping is up 150% and rebound damping is up 250%. The forks are adjustable for rebound damping, and the shock is adjustable for rebound damping and ride height. The ride is firm and sporty, the steering is sharp and accurate, the ABS brakes are superb, and you can come screaming out of a turn in second with the front skimming the tarmac or torqueing out in top; and either way you will have a hard time remembering the last time you had this much fun while wearing motorcycle boots.

Plus, you can actually put some miles on this thing. The original MT-09 had a 14 litre fuel tank. The Tracer carries 18 litres and gets better than 20 kilometres per litre, so it will go over 300 kilometres on a tank easily. The seat is firm and supportive. The small fairing takes the edge off the wind blast and removes a source of fatigue. And hard luggage, as previously noted, rocks. You can enjoy a refreshing beverage in a rural hostelry knowing that your stuff is dry and not being stolen. 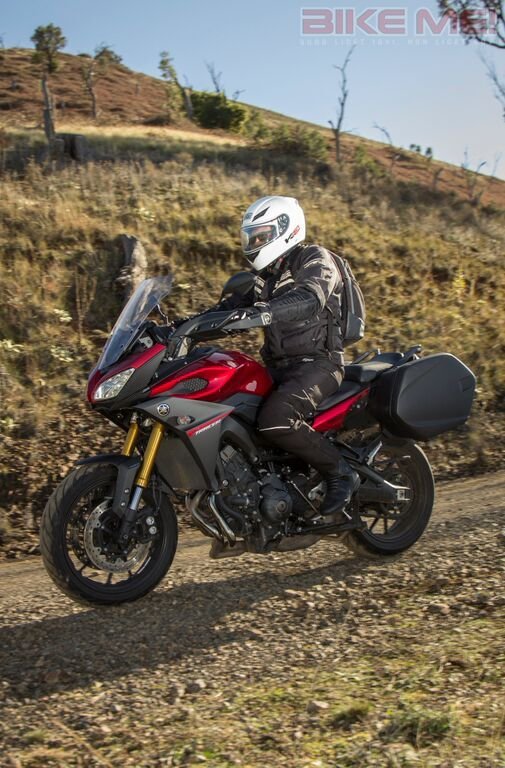 I wondered as to the point of having traction control on a 115 bhp motorcycle. I found out when I took seven hard-riding attendees of the BIKE ME! Pilgrimage to The Mountain on an exploratory tour of the roads around Sofala. There was about 30km of dirt roads involved, and despite the Dunlop Roadmax street tyres, the Tracer acquitted itself extremely well. You can grab a big handful at the apex of a dirt road turn, and it just gets traction and motors hard. The guy on the SV1000 that passed me spent a lot of time sideways. I didn’t. On the way back, there was enough ice on the Great Western Highway for the council to light up the ice warning signs, but the Tracer didn’t break traction once.

Yamaha have turned their hard-edged naked sportster into a very capable all-rounder that is way more practical and just as much fun. It costs about three grand more than the base MT-09, but it has the larger tank, better suspension, LED lighting, adjustable everything, hard luggage, traction control, ABS, wind protection, power outlet and even a centre-stand.

Niggles? It needs heated grips for those icy mornings, but you can get a pair and change for $150. It’s difficult to get most service station tyre fillers onto the rear wheel valve due to lack of space. If I owned one, I would get a set of angled valves with the first tyre change. 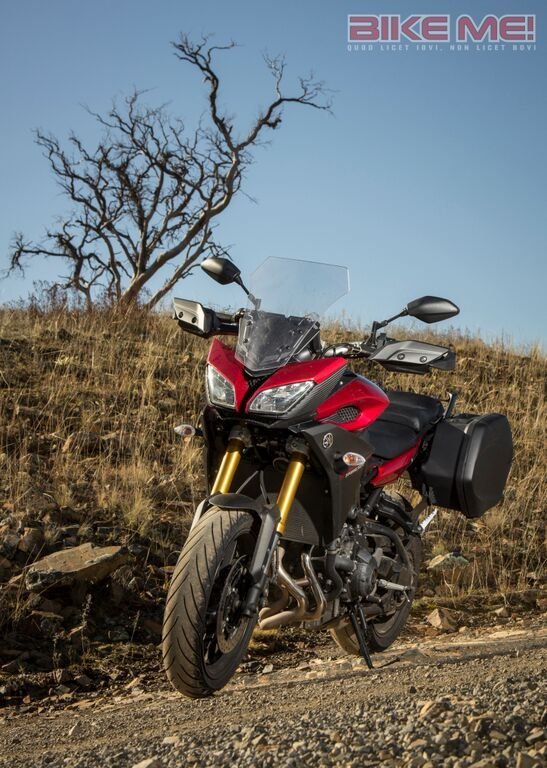 The Tracer will commute, tour or scratch with the best of them. It’s an adventure styled sports tourer that would be a great dirt-road weapon with some Anakees or Tourances or Battlewings on it, as long as you didn’t make too much use of the distance by which the muffler clears the ground. It will tick a lot of boxes on a lot of people’s “ideal bike” list.

It’s high on mine.