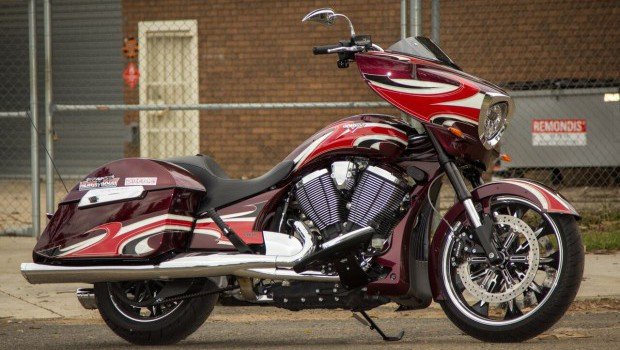 The start of any journey is always exciting. Lists get made, people are called, distant horizons are considered and plans are planned.

A project bike is such a journey.

Neale Brumby (the publisher of Heavy Duty magazine) and I have, over good whiskey and in the shade of tropical palms, decided we should undertake this journey.

Victory Motorcycles was approached, high-level talks were conducted, and one afternoon Brum called me and said: “We have a red Magnum.” 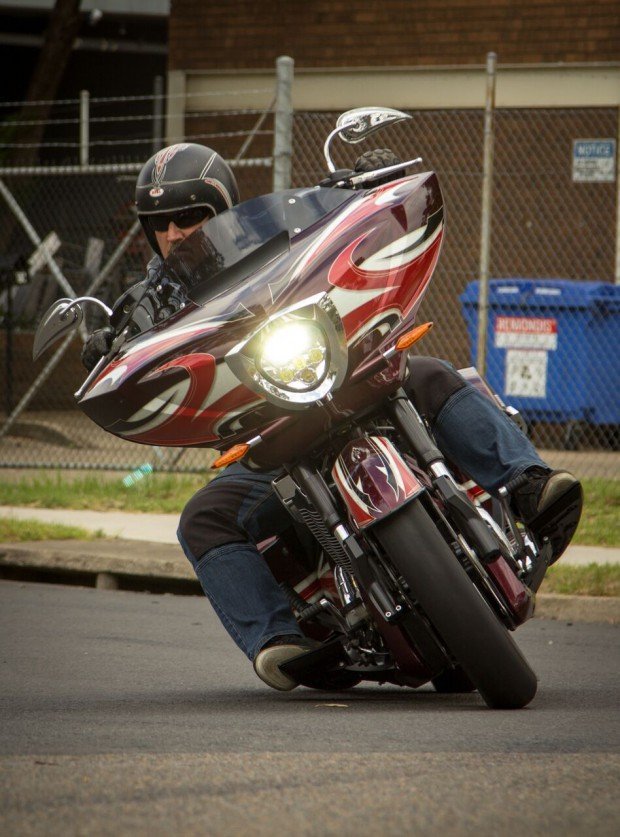 That headlight is pretty damn fine. There’s like six lights in in it and they’re white, so that I can actually see the kangaroos as I run into them.

“Who is ‘we’ and why are you telling me on a mobile phone about some illegal handgun?”

“‘We’ is us, and it’s not a handgun. Though we are gonna make banging noises.”

I happen to be fond of banging noises.

Brum, who is also fond of banging noises, then explained that Heavy Duty and BikeMe! were to collude in the re-creation of a Victory Arlen Ness Magnum in our own image.

“There are rules with baggers, you know.”

“What kind of rules?”

“Rules that say you have to ride them faster and harder than non-baggers because that shocks people and makes them uneasy. Rules that insist the bagger be loud and powerful and sexy, and so wrong that it transcends rightness and becomes truth.”

Brum is a man of his word. In short order he had the Victory fitted with 14-inch apehangers, tri-oval exhausts, massive front-brake rotors and the screen from a Victory Cross Country. 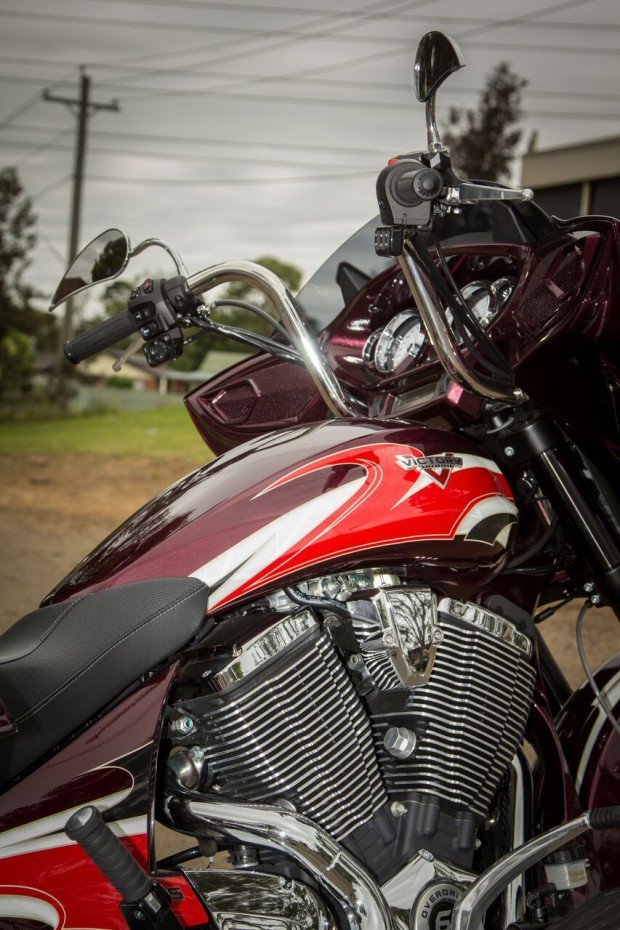 Apehangers. They could be higher, but then I could be sexier, too.

“I have begun,” he chortled at me over the phone, and listed what he had done.

All proper men love apehangers because nothing says “I am a man with massive, strength-bloated testes, who drinks heavily and cavorts with high-heeled harlots” like apehangers.

I also love brakes, so the big rotors are a very welcome addition because now that the bike is in my possession, we move to Phase Two of the project, which is to produce 115bhp at the back wheel.

Phase Two begins with me arriving at the Victory showrooms shortly after Christmas, when the staff is still deeply immersed in holiday spirit, and doing some pointing. 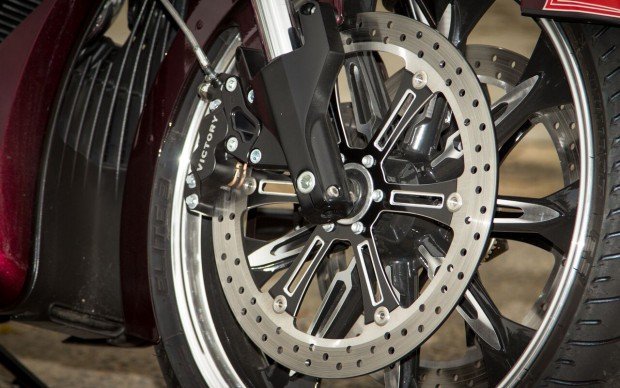 The bigger-diameter discs have made a huge difference to the braking ability of the beast.

And I will point at stereos. The Magnum has a stereo which is pretty good, but I am planning ahead to a time when the performance mods will render it hard to hear. So we shall fit extra speakers and criminalised sub-woofers and amplifiers.

Once I have finished pointing, I shall then insist politely that all of the stuff I have indicated be savagely hammered into the Magnum.

I understand that Victory is keen to demonstrate the ‘muscle’ aspect of its engines. In my experience with the bikes, they seem to be quite bulletproof and robust about the donk. This comforts me like a doona full of happy dreams. I am the last person who wants or needs a high-compression piston being fired into his smiling face when I am showing off to girls. 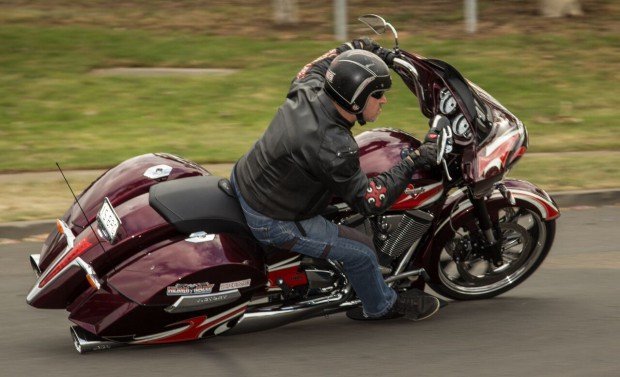 Are you watching, ladies?

Of course, I am also interested in maybe doing something about the looks. I’m not sure which direction this will take, because the paint on the Ness Magnum is already quite striking – but maybe not in the way it needs to be when its being asked to deal with its new-found muscle.

I’m thinking forbidding darkness and grim majesty and I’m not convinced that Huntington Beach Summer Breeze Swirl is where it needs to be.

A lot depends on the girls. If it’s too forbidding they will be frightened and hard to entice onto the back. If, however, the Magnum looks like a comforting fruit-salad, they will drop their guard and climb on board. After that, they will have no choice but to hang on (their thigh-muscles will need to be strong) because I will be unable to hear their terrified screaming over the thunder of me getting out of Dodge.

I also plan to get out of Dodge as much as I can. 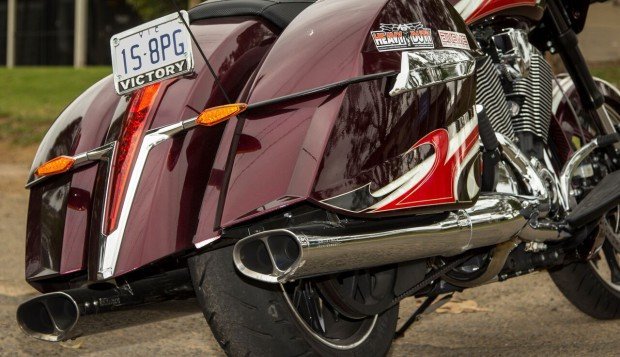 The tri-oval mufflers sound excellent. They do kiss the tarmac during spirited cornering and that is something we shall need to address as we move along. No, riding slower is not an option.

Baggers, may the Road Gods bless them always, are uniquely suited to doing such a thing. Hard luggage is a wondrous thing and very easy to live with when you go for long rides. Open pannier, drop stuff into pannier, close pannier, ride on. Stop, open pannier, remove needed thing from pannier, use it, replace thing in pannier, ride on. The charm of such simple user-friendliness is not lost on me.

At some stage, I will need to let Brum ride it, because it is as much his baby as it is mine. And what is the point of creating muscular man-baggers if you don’t share the experience with your fellow men?

So Brum and I figure we might pick a date, and meet up in some small country town somewhere and maybe do a bike swap. Or fight with knives under the cruel summer sun as pierced hotties bet on the outcome and fan us with their scandalous miniskirts between rounds.

Yes, we will take pictures and yes, we shall keep you all appraised of our progress, both on the pages of Heavy Duty magazine and on the BikeMe! website and social media pages.

After all, it’s no fun unless people are looking, is it?

If you’re in the market for a bagger, this is one of the best there is. More info can be found here.

Here’s a yarn of a solid ride I did on one.

Here’s a video we made of last year’s Magnum.