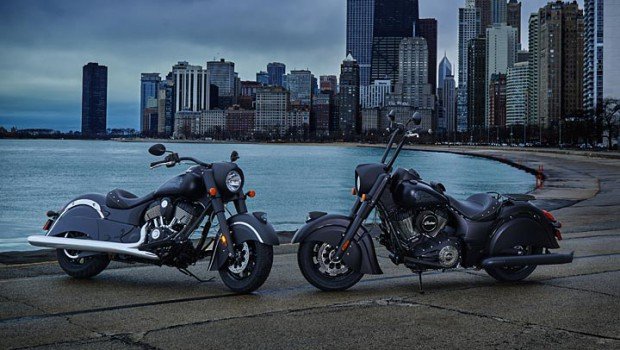 I’ve come to talk with you again. Because the last time I talked with you, the conversation was fantastic. It involved pizza, beer, a BMW, and crazy mates. And it involved several cans of matte black spray paint. The end result was a vision of the night. Sure, underneath the matte black it was just an old BMW R100S with a massive Heinrich tank and SS45 number-plates, but our feverish paint-job had rendered it far more than the sum of its parts. 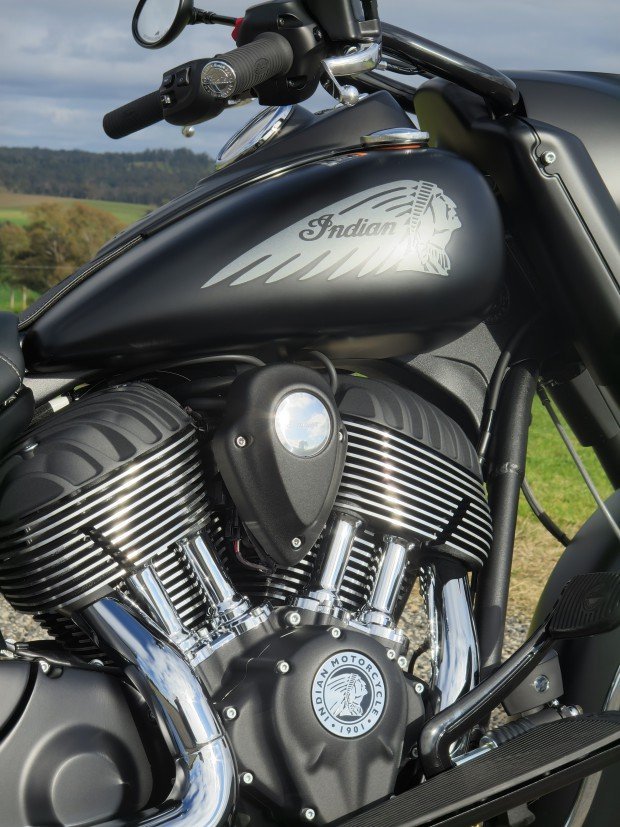 It has a beaut war-face

This is the necromantic power of matte black.

MV Agusta knew this when it birthed the 750 Senna. It piked it a bit and only made the fairing matte black, but it was certainly addressing the night in a meaningful fashion. Harley-Davidson has likewise toyed with matte black, but it also didn’t quite go far enough into the night proper.

Indian has no such qualms.

It has leaped into the darkness with both feet and created two iterations of the Dark Horse. One (the one I rode) still pays some vague lip-service to the Un-Night – it’s got chrome pipes and chrome highlights on the fenders. The other (and the one I desire with a derangement that requires counselling) is all black. Its commitment is complete. It even comes with black apehangers. 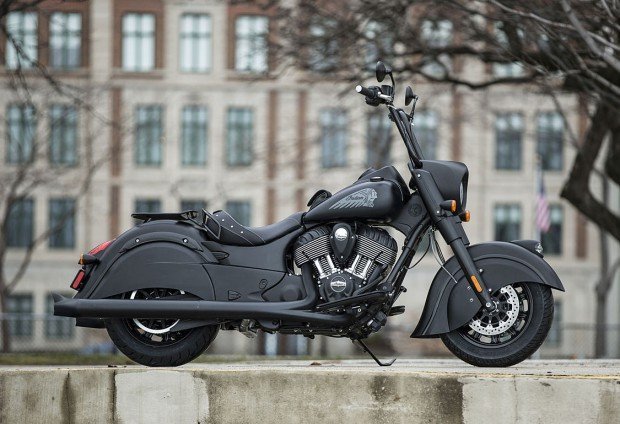 This is the even-more-black iteration. 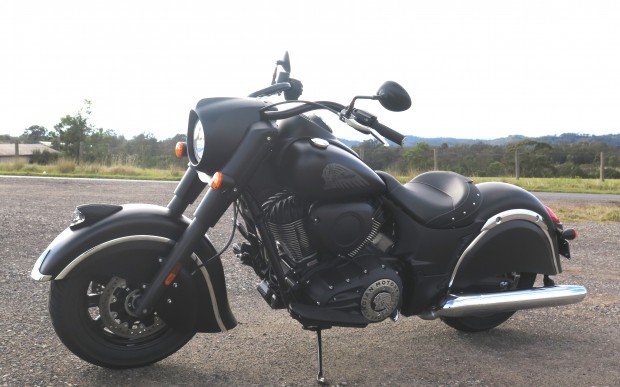 This is the slightly watered-down incarnation.

The softly creeping vision that sowed its seeds while I sleeping and that was planted in my brain, has now become reality.

I am undone. And bathed in rapture.

I already hold the Indian to be the best American V-twin on the market. It handles better, has better suspension and better brakes than its only competitor. The engine is bigger and it steers with more aplomb. Don’t misunderstand me. I love Harleys. But they have always been let down by their suspension and brakes. Sure, the bulk of their buyers don’t know enough about riding (and don’t ride hard enough) for it to make any difference to them, and subsequently do not care. But I know. And I care. And I have replaced the suspension on every Harley I have ever owned. 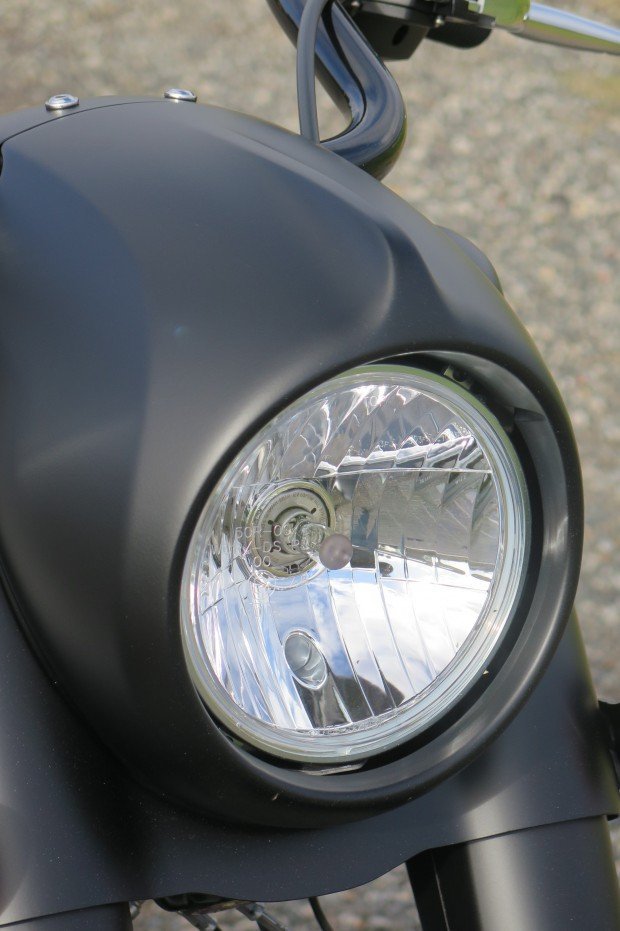 No. Black is not slimming. It is mandatory. 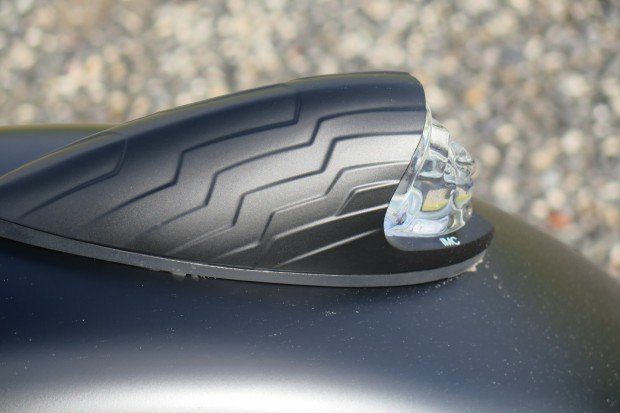 Nothing says “war bonnet” like matte black. Chrome does not say “war bonnet”. It says “polish me”. 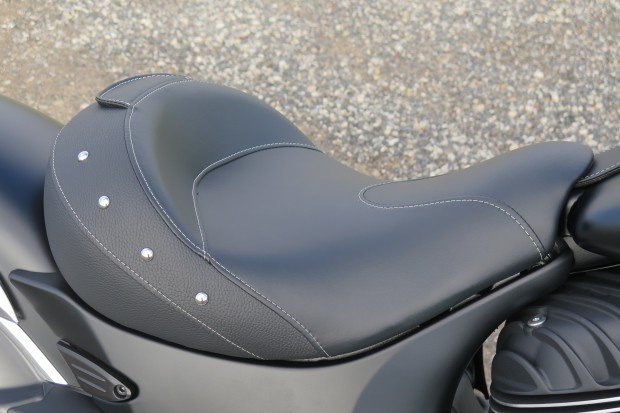 It loves your bum, even if you don;t love your bum. Great seat.

Indian was, of course, aware of Harley’s shortcomings in that area. And when it came to the party, it came armed for bear in terms of longer-travelling and better damped suspension. The result is a very big bike whose handling belies its size, and whose ability to deal with the vagaries of the road is class-leading.

Good suspension is crucial for cruisers because the riding position does not allow your mighty thighs to absorb any of the nasty bumps. All of them are channelled straight into and up your spine. You can make the seats as soft and plush as you like. Hit a big bump at speed and you’re gonna need a double whiskey at the next stop.

I took a Chieftain (the fully dressed version) the back way to Phillip Island last year and did not shame myself in some very fast company. And I did not need any whiskey. 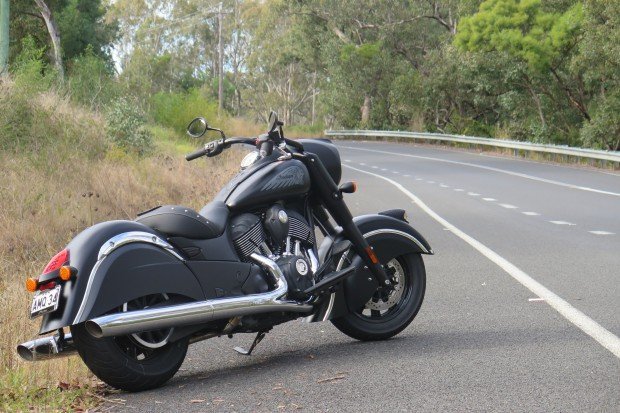 It sits. It waits. To eat your soul.

And now that there is a matte black version, I am a drooling idiot.

To be honest, I have never been enamoured of the paint they sprayed on their line-up. And this is not about quality of finish. That’s top-notch. I just didn’t like the colours. Yeah, I get the “ye olde heritage” thing, but the blue and the red versions just didn’t do it for me. Happily, there has always been a black, albeit gloss, version.

And now there is the final denouement. The nil plus ultra of paint schemes.

Matte black. Glorious, majestic and menacing in equal amounts and in large helpings. 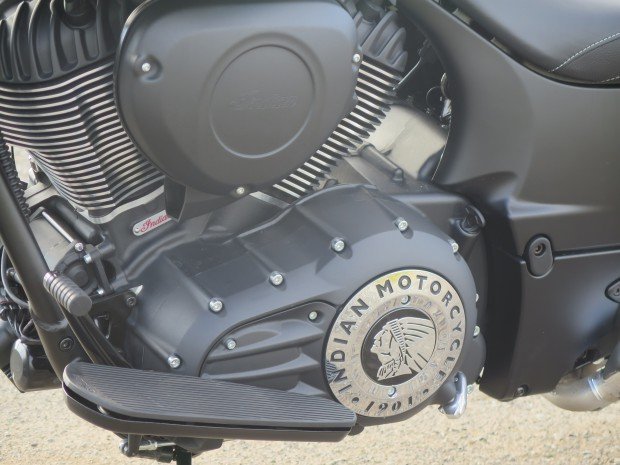 There is never any doubt you’re riding an Indian. 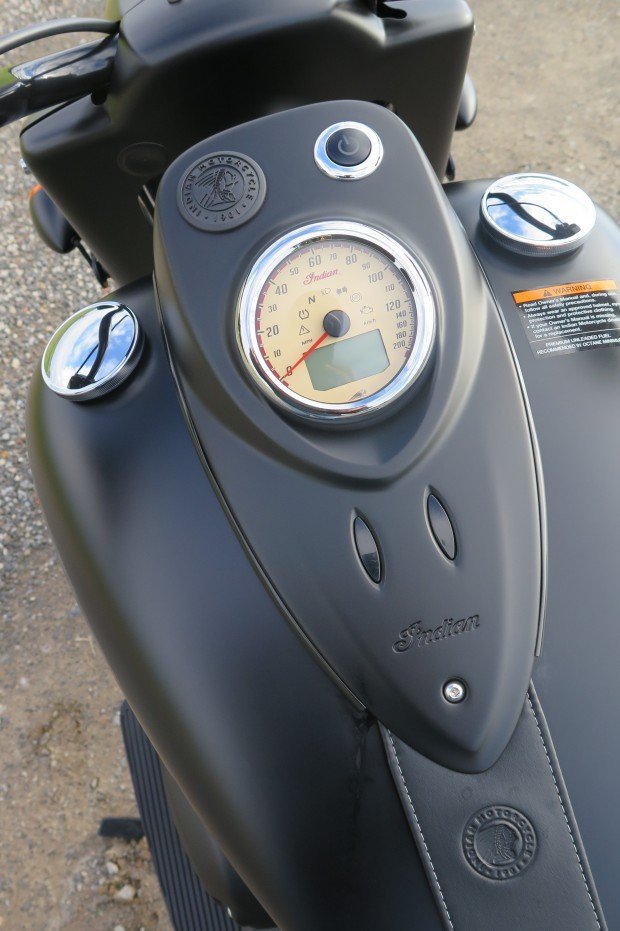 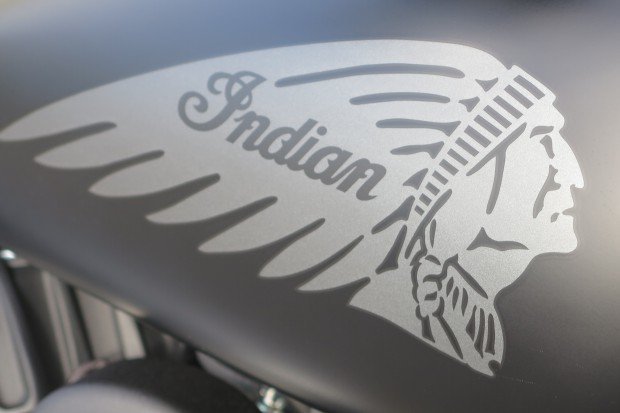 Everywhere I went and every time I parked it somewhere a crowd would gather. It was invariably a respectful crowd and full of awe. To a man and woman, the crowd would nod its multiple heads and declaim upon the sheer, unalloyed black grandeur of the Dark Horse. I would then be forced to lie and tell them that yes, it was mine. Then I stopped lying and agreed that yes, it was stunning. And that they should take not one step closer to its midnight, lest their souls be torn from their bodies and cast into the pit.

I had only one weekend on the Dark Horse. I was promised a longer and more meaningful association when the various motorcycle media myrmidons had had time to scratch their fleas over it. And I will remember that promise. And seek to collect on it.

Do not tease me, Polaris.

The Darkness awaits me. It is my old friend, after all. 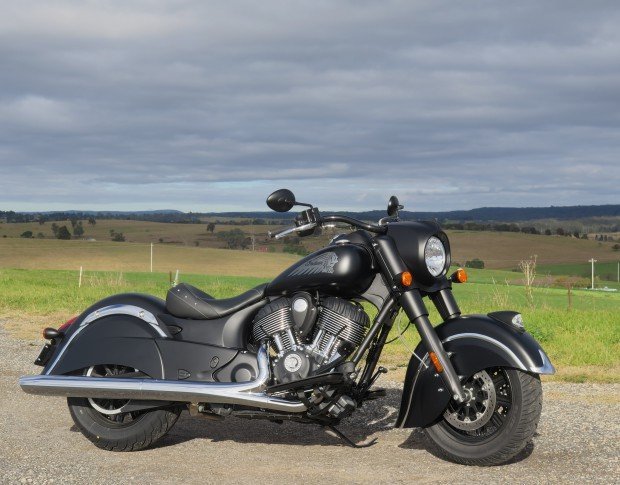 The sky could be darker and more menacing.

PRICE: It’s $26,995. The other blacker version is a bit more. But what price can truly be put on more blackness? That’s right. Be quiet. I do not care for your pathetic fiscal mewlings.