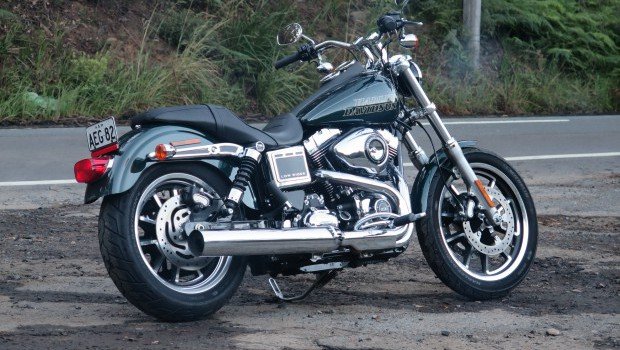 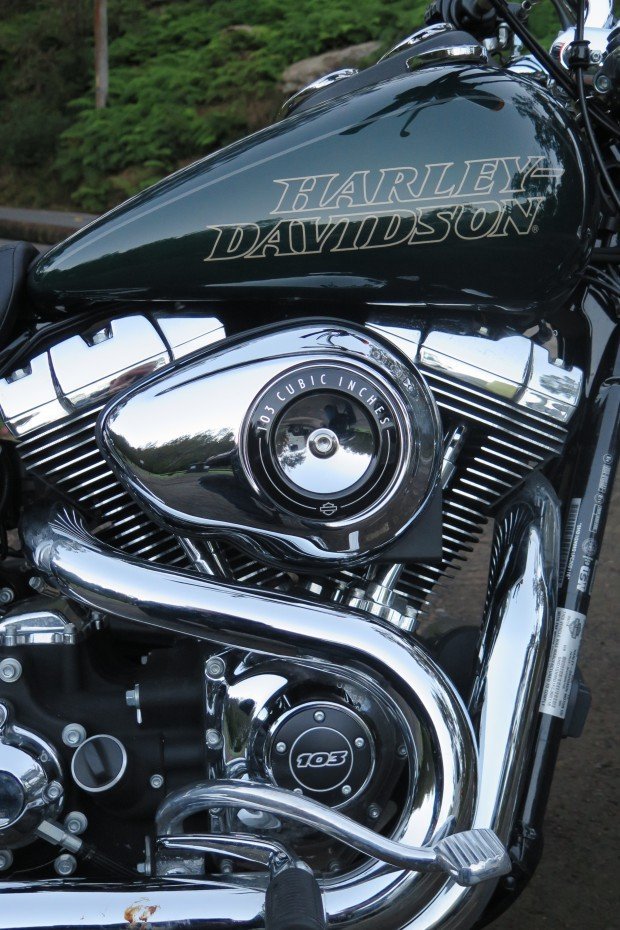 It’s funny, but I have never been a fan of the Dynas.

Yes, it is true they are viewed by Harley lovers as the “riders” Harley.

Yes, it is true that they can and do back this up by having more ground clearance than the Softails and FLs, as well as more sanely-sized tyres.

And yes, it is also true that the Low Rider is not really a proper cruiser because your feet neither point forward or stick out in front.

In every way, the Low Rider is very much the Harley of choice for those who want to…well, hook into it a bit.

I, of course, am an entirely contrary being, which is why I have always been enamoured of the lower, grindier, fatter-tyred and altogether (to my eyes) more masculine FLs.

It became a ‘thing’ with me. Like self-harming. I would force them to corner utilising a savage combination of strength, obstinacy and prayer.

That combination was never required when riding Low Riders in anger, and the crazed swine I knew who rode them never failed to point that out to me when I turned up at the pub after them.

The first Low Rider arrived in 1977, and it has been one of Harley’s most iconic models ever since. However, there has not been a new Low Rider in five years.

But there is now. 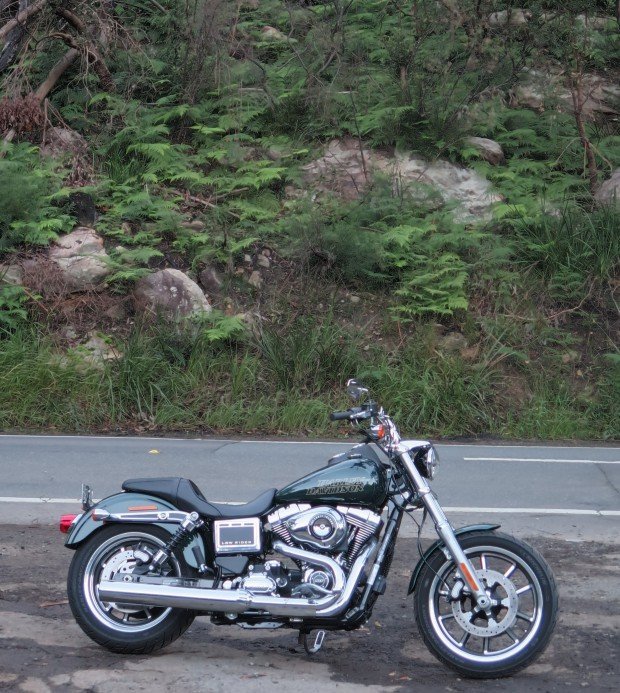 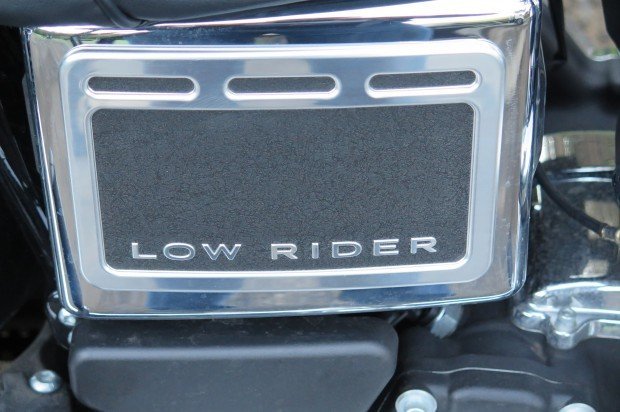 It is that indeed. 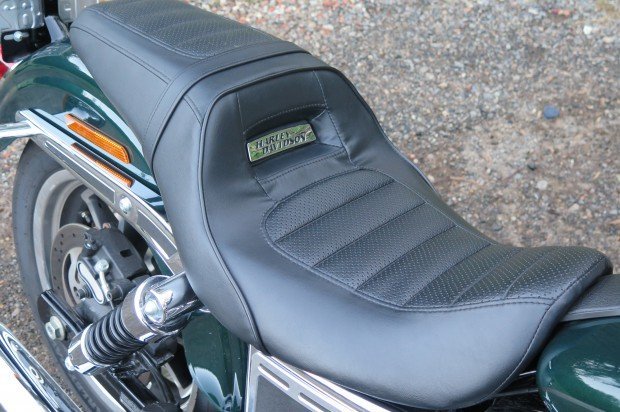 Behind that plate live the adjusting screws. You can see where the lumbar section of seat can be shifted forward by the fold in the vinyl. 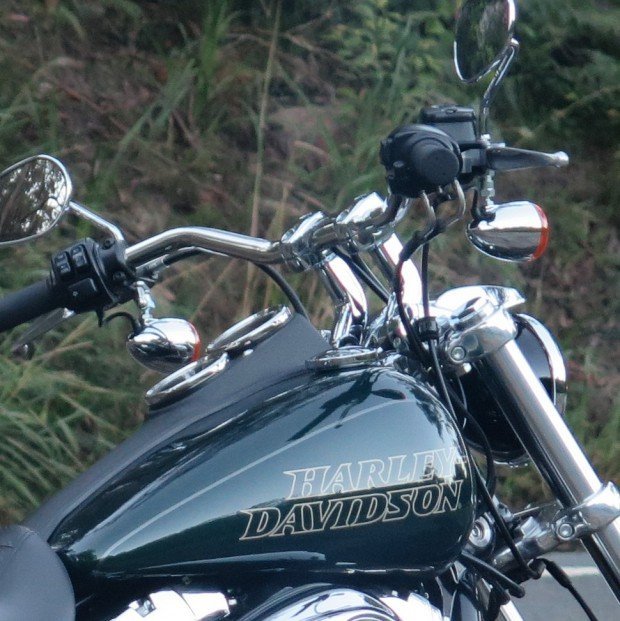 The adjustment on the handlebars can be done at the bottom of the risers.

And I have very much enjoyed my time on it.

Yeah, look, I know that there is a section of the motorcycle-riding community who scorn Harleys just because they’re Harleys.

If they look over there, they could see the vast amount of fucks I have to give about that.

I love Harleys. I always have and I always will.

None of these people could ever have any effect on the ineffable and eternal coolness that Harleys emit.

They are not and never will be Harleys.

No other big V-twin does it the way Harley does it. They are unique.

The way they idle – an eerily organic and often uneven vibration – the way they sound when you kick them in the guts – a staccato hammering that sounds like its ripping the air – and the way they look – the Japanese have been copying that for years for a reason.

And lastly, and perhaps most importantly, the cachet. 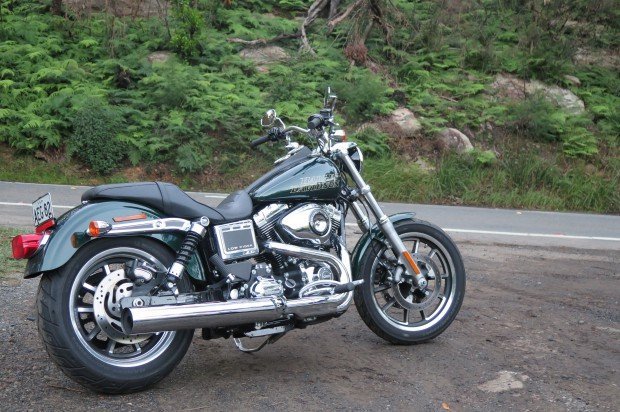 It has a nice stance. 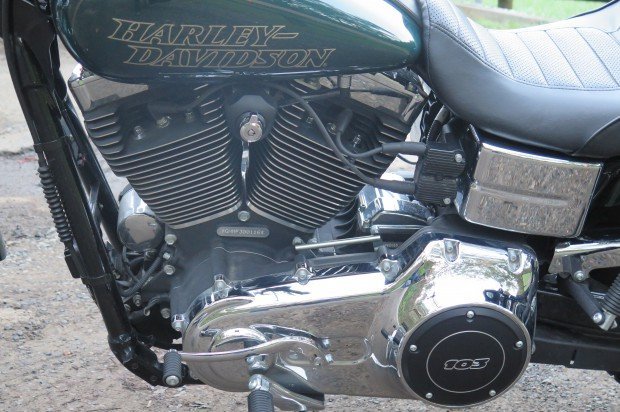 Don’t see them from this angle much. 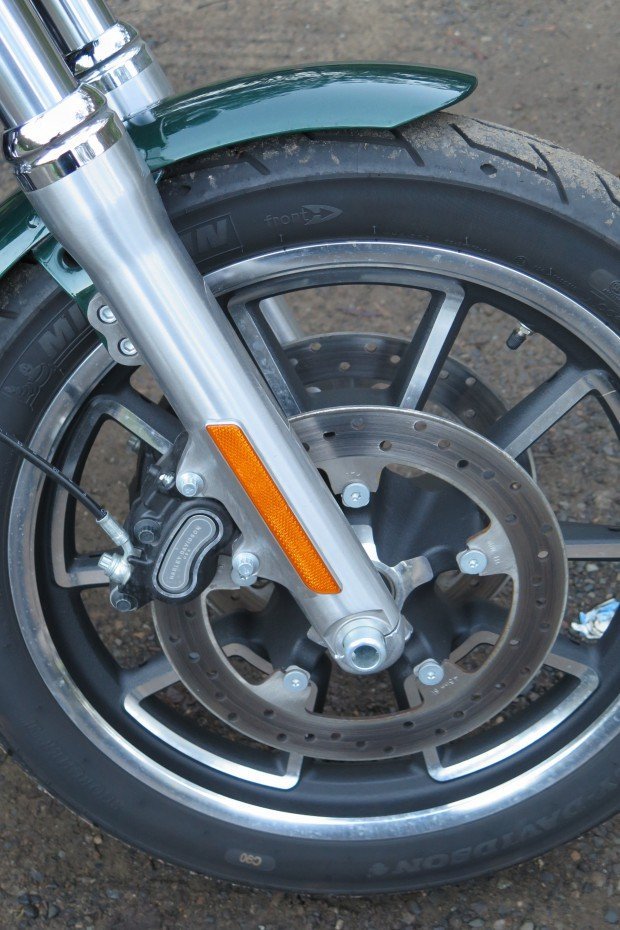 Nope. They’re not Brembos. You do not need Brembos, OK?

I spent a fortnight astride the Low Rider just wallowing in it like a fat bacon-pig.

It reconnects me with my past, albeit without the police beatings and accompanying madness. And that’s kinda nice.

Sadly, one of the major elements in all this wallowing and reconnecting was missing. Stock Harleys don’t make any kind noise anyone wants to listen to.

Every Harley I have ever owned sounded like a thousand lunatics wrecking a battleship with hammers. So I kinda miss that.

But that’s all I miss.

The 2015 Low Rider shifts beautifully, smoothly and precisely. The clutch is light and the take-up sane.

The suspension is arguably the best in the Harley line-up – yeah, it’s still got a way to go, but it’s better than you might think.

ABS is standard and the fact that it runs a 19 out front and non-fat 17 up the back means the bike turns easily and willingly, and weird shit is not going to happen when you turn the wick up.

The motor (1690cc) revs eagerly and is rather sprightly over 3500 rpm. It pulls surprisingly hard (hey, I just got off an R1, OK?) if you’re interested in belting along over 140. And I normally am.

The seat is comfortable and plush and very low (hence the name) at 680mm and because it’s narrow, you can lane-split like an arrogant mongrel.

But what’s special are the adjustable ergos. 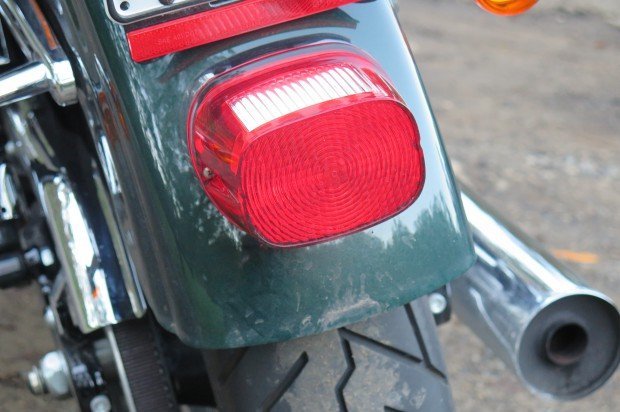 Harley must have several billion of these tail-lights in some warehouse somewhere. They have not changed (and why should they?) since the time of Jesus. 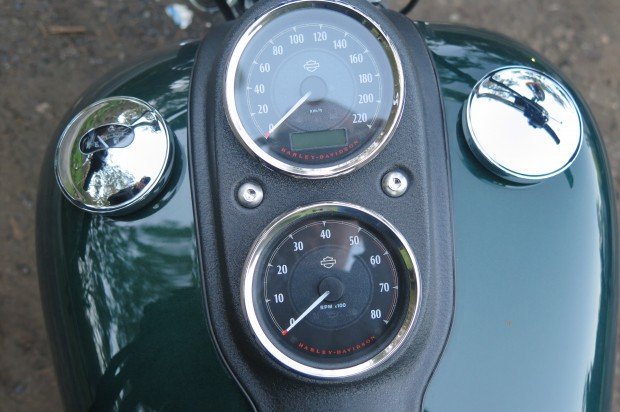 Fuel gauge on left, filler on right, simple gauges no-one ever even looks at in the middle. 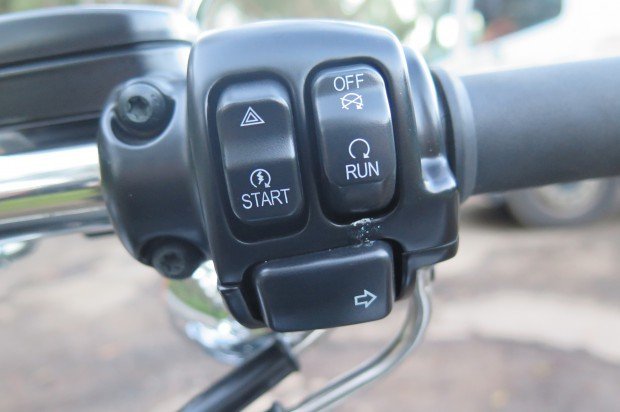 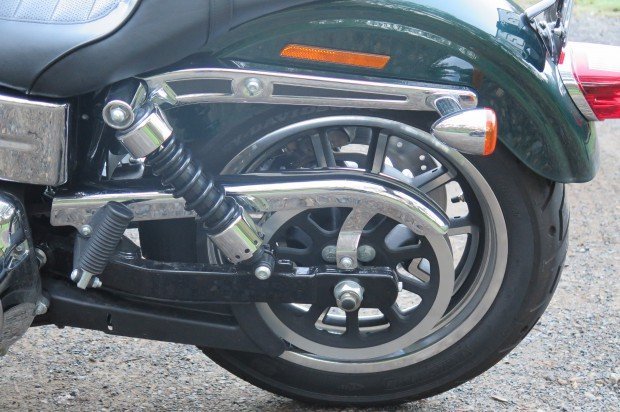 The belts are great and last for ages. I’d swap out the shocks for something a little more serious. 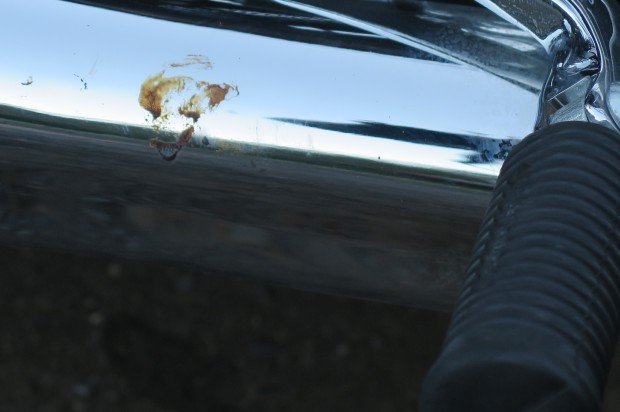 Everytime. The heel of my boot will always touch the rear pipe as it winds its way past the right-hand peg. Everytime. Well, until I buy aftermarket pipes.

Harley felt the new Low Rider needed to fit as large a cross-section of riders as possible, so it set out to build a bike that would work ergonomically for riders from five-feet tall to six-and-a-bit feet tall.

And this is how it did it…

Behind the handsome seat-plate are some screws which allow you to adjust the lumbar support of the seat by pushing it forward or back by as much as 38mm.

The handlebars are also adjustable and allow you to swivel them either towards you or away from you, and the foot pegs are some 50mm further forward than the other Dyna models in the range.

Little measurements? Sure. But you would be amazed at how big a difference they make. And how important it is to be able to set up your riding ergos just how you like them.

Of course, the level of finish is high, which is what we have all come to expect, and the chrome is simply otherworldly. All chrome should be this lustrous.

My Low Rider came in a dark green flavour (Deep Jade Pearl), but there are five other colour choices including two hot two-tones. I could live with the green, actually. 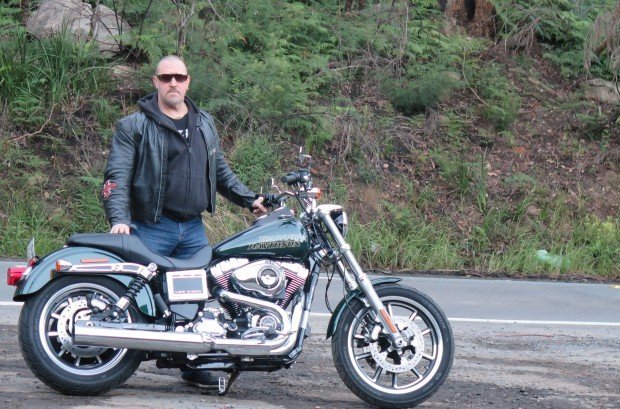 Yes, mum, I still ride “det noizi motosighkul”. But this one is not so noisy.

Ultimately, comparisons with other bikes are entirely self-defeating when it comes to Harleys.

If you want a Harley, that’s all you want and all you’re ever gonna want – and I get that.

You’re not ever going to buy another brand, are you?

And you may well want to buy a Low Rider.

And I do not blame you.

A Low Rider will set you back around $23,495 and you can look at your options HERE.