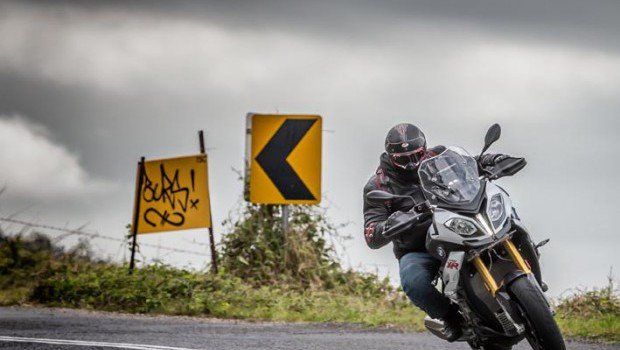 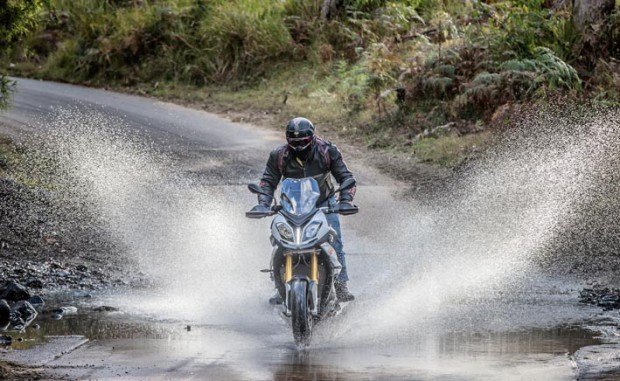 Everyone on the press launch had their photo taken spreading this water around. And this is mine.

It’s always a source of great amusement when a motorcycle manufacturer creates a category for a bike it has built. It’s like it wants you to behold its product in a certain way. Check out the pigeon hole we have made for this bike.

Thus I invite you to behold the latest – and possibly greatest – motorcycle by BMW Motorrad. The S1000XR.

It occupies a category of motorcycle heretofore un-expressed. The category of Sports Adventure.

I try to make every ride, even my commute, an exercise in sporting adventure, regardless of what I am riding. But it’s hugely affirming when a bike manufacturer drinks from my Kool Aid bucket and builds a bike for just my mindset. 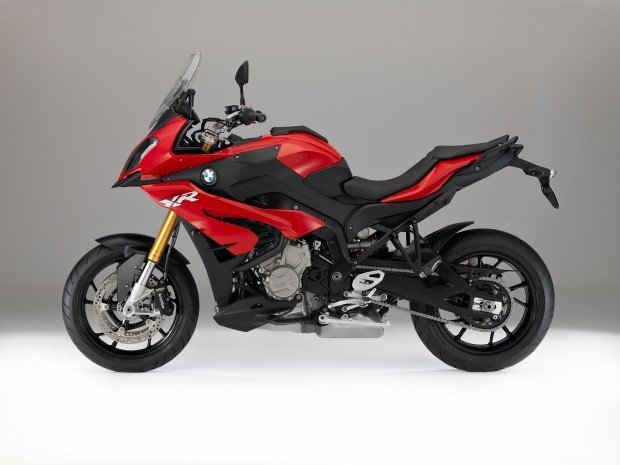 You may have it in red… 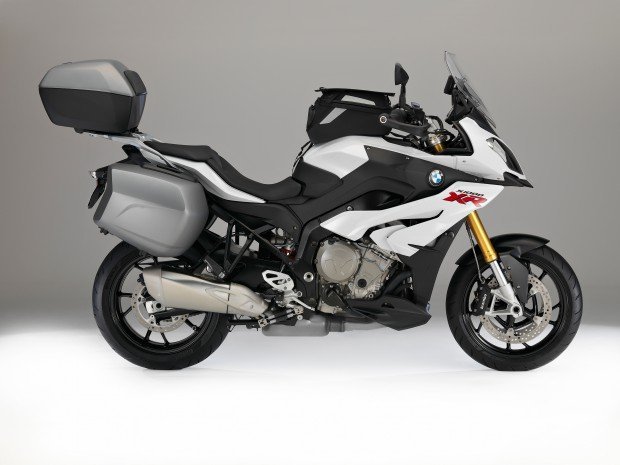 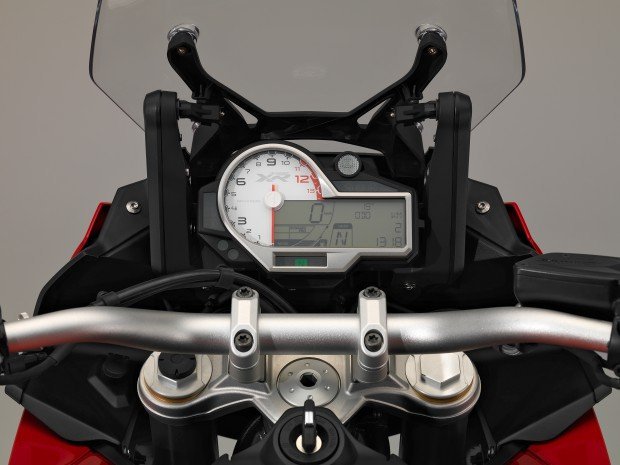 Familiar, as well as being easy to use and read.

It is not a dirt bike, though it is certainly capable in that regard.

It is not sportsbike, though it is certainly capable of showing its tail-light to those creatures.

It is not a tourer, though it is emminently capable of devouring the miles with aplomb and comfort.

Could it be all things to all people?

So what it is, in real-world terms, which are the only terms that matter, is a great motorcycle.

And marketing pigeon-holes aside, I will tell you why it’s that.

It is sure-footed and agile to a jaw-dropping degree. This (and one other thing which I will get to) was what most imprinted itself on me during my time with the XR. 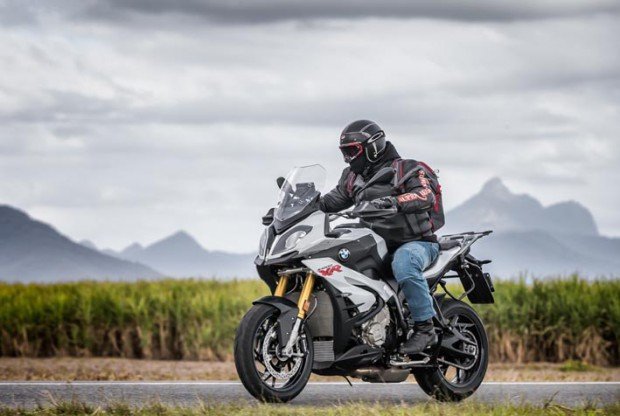 “I’m gonna ride up and down them mountains like a goat on top of another goat.” 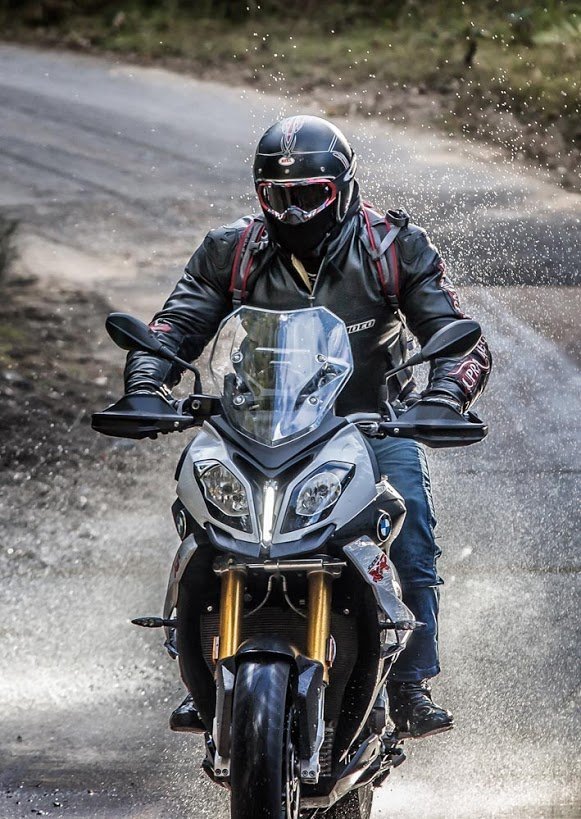 “Sure. I’m happy to ride through that water-crossing all afternoon. I’m the only one here who’s not lying about that.”

I could put it into the most diabolical, broken-surfaced, gravel-strewn hairpin, and emerge out the other side wondering how that was possible. No matter how bumpy, how heart-in-mouth, how “Why are you bastards not fixing this shit? ” it got (and it got there a lot), the XR’s wheels were stuck to the road like limpet mines.

The BMW Motorrad launch I attended under the stern captaincy of its marketing manager Miles Davis,  saw me riding some of the most dire and challenging stretches of bitumen in Australia. Up and down the Lions Road, the run up to view Mt Superbus, the sprint into the shadow of Mt Barney, and a host of other scenic backroad wonders, were all conquered with an ease (and at a speed) that confused, bedevilled and exhilirated me. The entire two-day jaunt could be described as a relentless succession of glorious near-death experiences which enriched and exalted me. Which is exactly what motorcycling is when you’re doing it right. 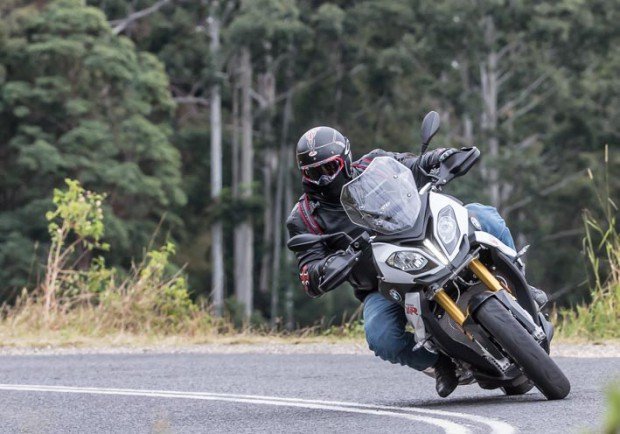 I would have put my knee down but there were trucks and death and fear. 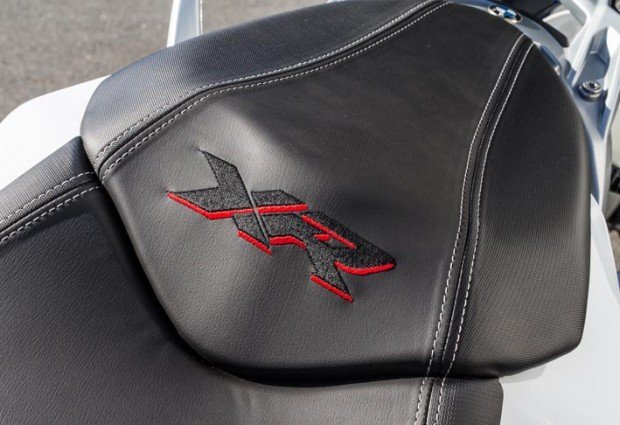 This is the accessory seat. With embroidery and nicer padding.

I encountered a hurtling on-coming truck the size of a small moon on the rutted hairpin approach to a single-lane wooden bridge on the Lions Road.

Cool, I thought. I’m dead shortly. I was already leaning into the corner. I braked, I did not target-fixate and I aimed to stop on the little bit of road-edge I trusted the giant bastard wouldn’t need when he’d crossed the bridge. To say my intent was hugely optimistic is no understatement. But my options were zero. 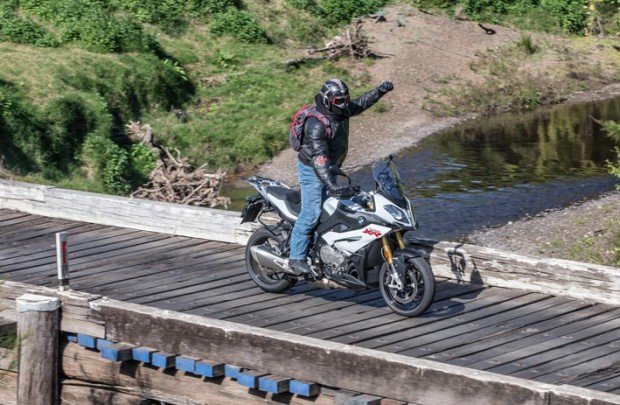 “Success! Did not die by truck!” 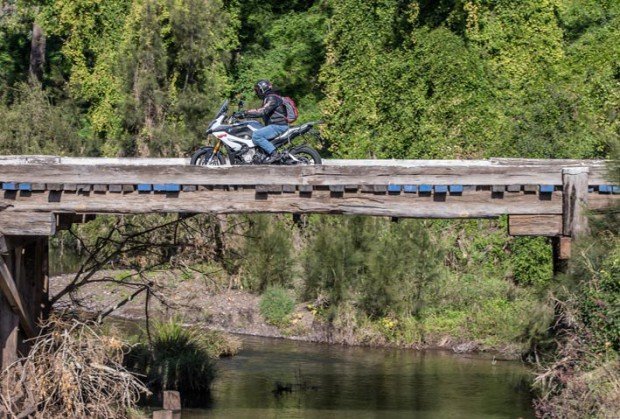 “OMFG! Here comes another one! Run away!”

And so it came to pass. No mess. No fuss. I was in total control the whole time I was planning not to die. The truckie didn’t even put down his can of Jim Beam, bless.

Yes, of course, it’s the electronics. Certainly the superb weight distribution and steering geometry play a huge role in the XR’s ability to conquer all sorts of road surfaces, but the electronics package is the glue that binds it together. One cannot make a remarkable goulash without the special paprika that makes it all work.

There are four riding modes – Rain, Road, Dynamic and Dynamic Pro (which is accessed by a coding plug you can activate after your first service). As you can guess, the levels of electronic assistance vary as you click your way up the chain of command. But you can also adjust stuff inside the mode you’re in if you’re geeked up that way.

BMW offer some of the best ABS in the business (Yes, you can turn it off, Valentino), as well as Automatic Stability Control (ASC), and Dynamic Traction Control (DTC). Of course there is also electronic suspension adjustment (ESA), just in case you thought there might be a lack of acronyms in the package. 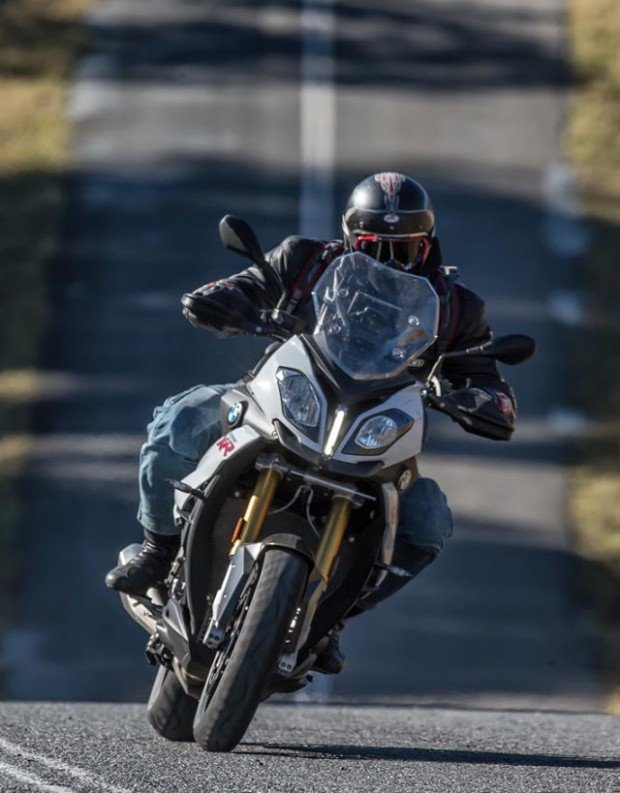 The S1000XR is still wonk-eyed about the headlights. It’s the S1000 “thing” I am told. The LED strip in the middle looks pretty cool.

Each time a bike manufacturer brings out a new suite of next-gen computerised sorcery to aid me in staying out of surgery, I blink like an Iron Age peasant confronted with a Bic lighter. What sorcery is this, I think? Then I realise that I do not need to understand the what or even the how of it. I just need to trust in it. I was one of those knobs who laughed at ABS when it first came out, stating it would cheapen my skill set. Then it saved my worthless arse. Now, as the song goes: I’m a believer.

You know what else I have come to believe in? 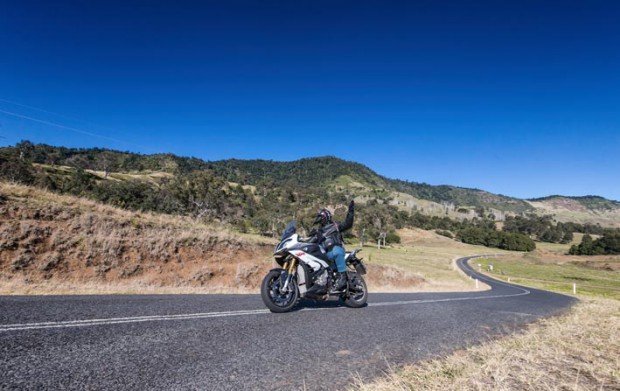 “Clutches? We do not need clutches.”

The quickshifter thing. I love it. Changing up with the throttle loaded is a joy unto itself. And now, with the XR, you can downchange as well. What a time to be alive, huh? Clutchless downshifting. It’s very cool and it screws with your head a bit at first, but it works a treat when you get the hang of it. Essentially, you only really need the clutch when you’re in heavy traffic, stopping, or launching off the lights.

Each time I got off the XR, I would stand back look at it in amazement. It was not displeasing to my eye, but it could have looked like a burst pudding and I would still have gazed at it in awe. I used to (and still do) look at BMW’s GS like that. It sure ain’t purdy, but it sure do work. Ask anyone who has chased one, competently ridden, on the road.

The XR is like that. Only instead of the boxer engine, it has the re-tuned S1000RR superbike engine under the tank – all 160bhp and 112Nm of it, just like in the S1000 with the single R. Which brings me to that other thing that imprinted itself on me. 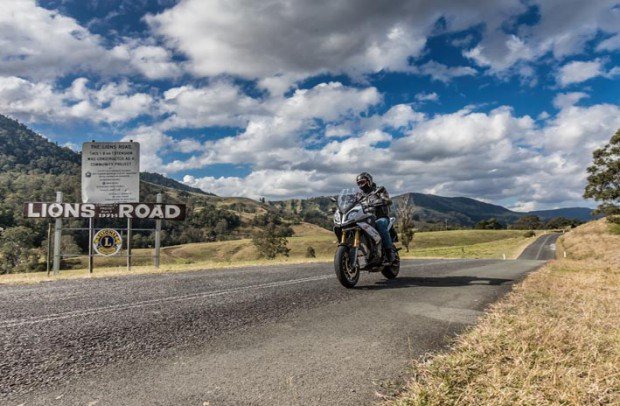 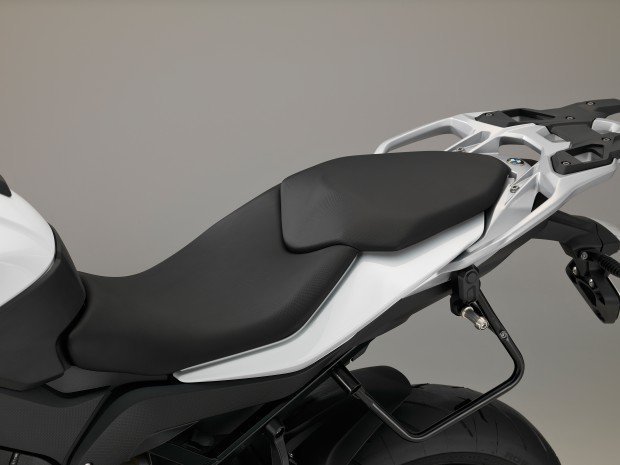 This is the stock seat. It cups your buttocks like your date at the High School Formal, but with less tears and demands for more Ben Ean.

It sounds simply amazing. It shrieks its deep-noted anger at the world exactly like the RR does, but instead of the rider being folded into a racing crouch, he sits comfortably upright, hanging onto a set of comfy wide bars.

Well, yes and no. The engine is the same. It is tuned the same way. The double R tune comes into its own at speeds over 240 and on The Racetrack. The single R tune is all about Not The Racetrack. And as a consequence, it’s one of the best naked bikes on the planet in terms of sheer ride-ability. It’s not a de-tuned RR so much as it is a re-tuned RR.

That said, I would buy the XR instead of the R. Longer-travel suspension on our roads and for my purposes speaks quids. The sheer usability and subsequent ride-ability and road-holding prowess of the XR package with that crazy-sweet engine is just all-conquering. 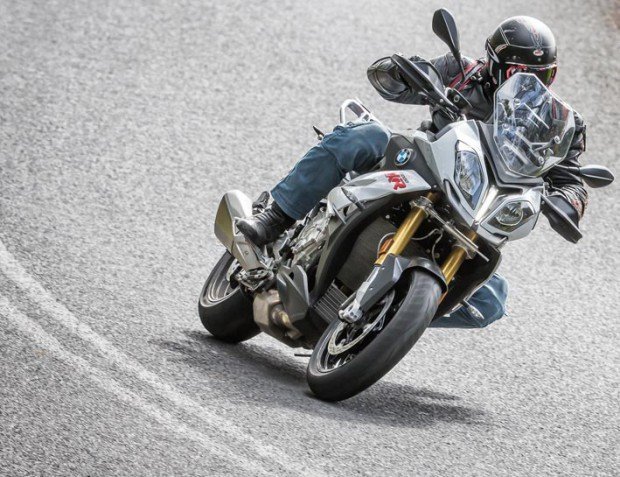 Come, let us sing the song of our people.

But it’s not perfect.

The standard seat tends to cup your arse in a way that is a little off-putting at first. I got used to it quickly enough and found it to be comfortable despite my misgivings. There are other seat options that are more comfortable, and while I had no issue with the height of the bike, BMW does offer a lowering kit and two different seat heights for those who do.

The XR also delivers a mild buzz through the bars, which is most noticeable at between 120 and 140. Oddly, for me, this was not the annoying problem I initially thought it would be. It actually gave me an kind of organic connection with the engine that was neither distracting or all-encompassing. I actually forgot about it after 50 or so kays.

I’m nit-picking a bit, aren’t I? I’m trying to find fault where there is no fault to be found. This happens to me on many of the new bikes offered to the world.

At the end of the day, the XR is a bona fide weapon. It is immensely able, especially on Australian roads, to deliver another level of road-holding brilliance. I predict you’ll ride the XR point to point faster and with more confidence than you will believe possible. 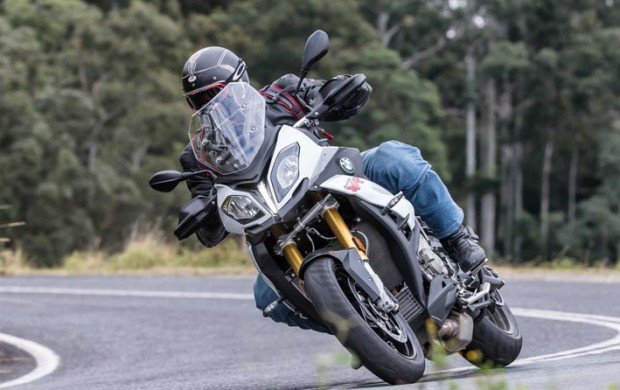 The screen is adjustable. This is its low setting. If it was up on the high setting, it would come to the top of my goggles. Works, too.

The time of the BMW’s mighty and vastly under-rated K range is coming to an end. In its place will come a series of S1000-engined rocketships, and the XR is the third iteration in that expanding range. It’s not intended as a replacement for the GS, but I reckon it will certainly give a bloke looking for a GS (and who will never ride really it off the bitumen) a rather more exciting option.

Geschwindigkeit und Stärke – speed and strength, as it says in the heading.

No road too rough, no bend too tough.

That’s where it is for many of us, and the BMW S1000XR will be welcome in that company.

It’s $22,190, but that excludes dealer and on-road costs. You’d best bring $25K with you and have a celebratory beer afterwards.