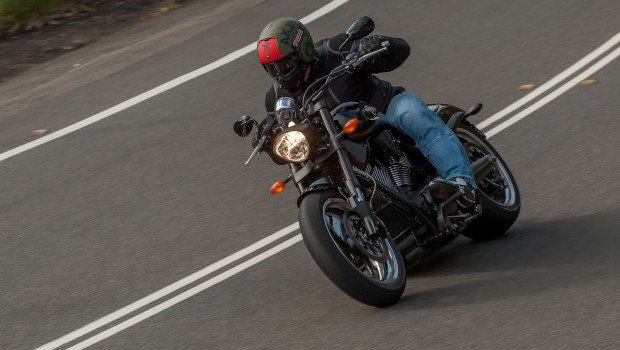 There’s nothing in my grim, calcified heart that doesn’t love a giant, black, single-seat, 106-cubic-inch American V-twin with a rear tyre as fat as a Biggest Loser contestant.

The sheer primal simplicity of the Hammer has always appealed to me, and will continue to do so until the oceans dry up and Australians stop voting fascists into parliament.

For I am a simple-minded creature. 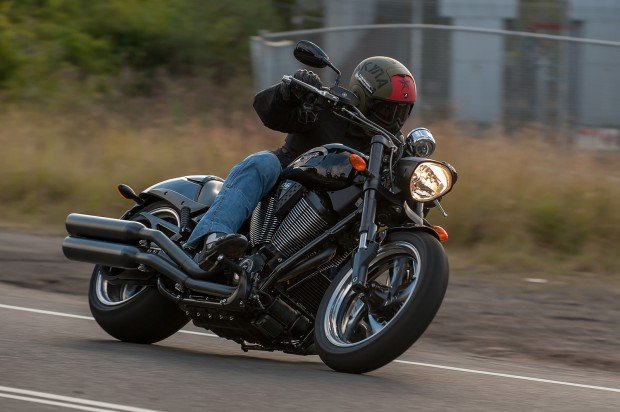 “This is my corner. There are many like it, but right now this one is mine and you will deal with it.” 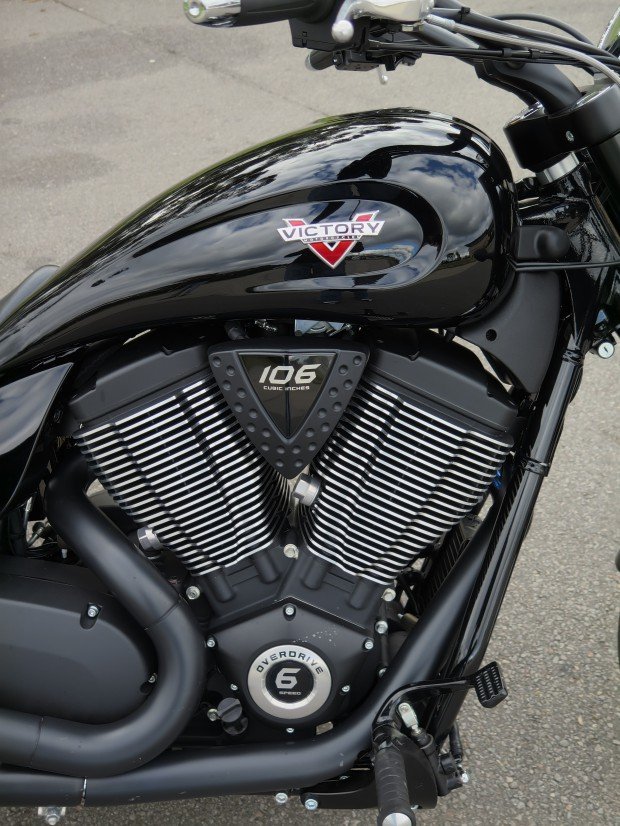 On any planet you’d care to mention, that is a handsome V-Twin. 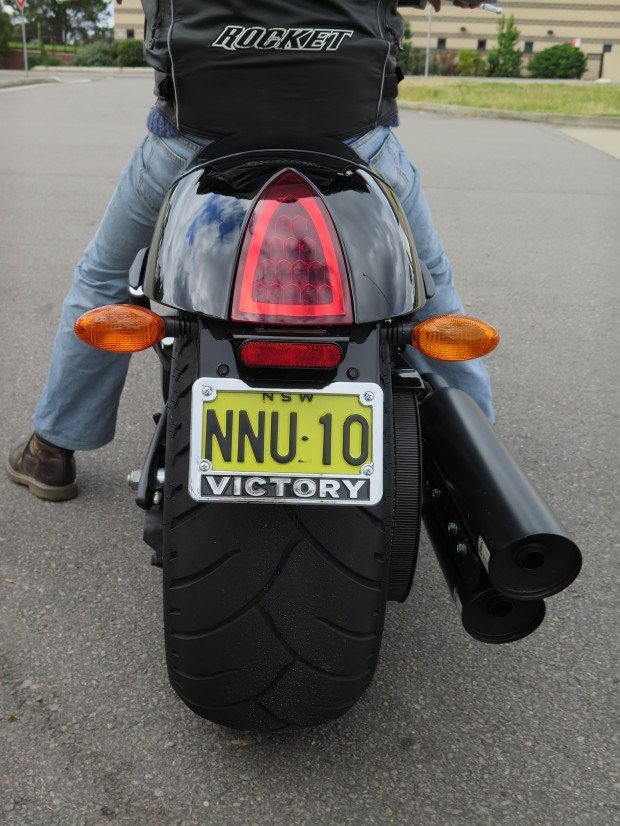 Fat and black like a fat black…um, fat black thing 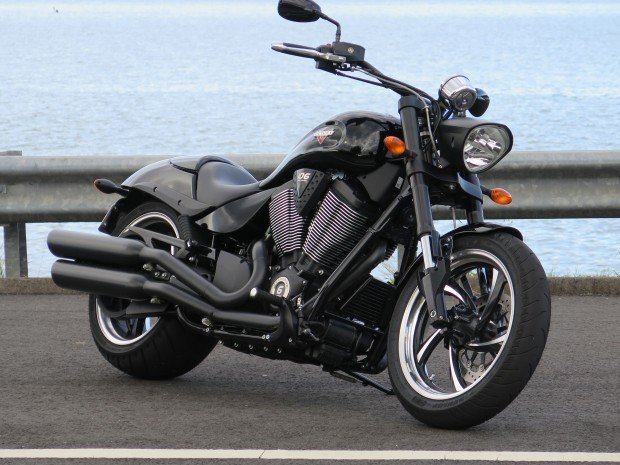 I’m thinking they could have painted the wheels black, too…

Ask my wife. I have no complex needs or multifarious wants, and while I can certainly appreciate the high-end technology available on many modern motorcycles, I can also throb with love at the glorious minimalism the Hammer Eight-Ball serves to me.

There are no complicated dash menus to scroll through.

There’s no ABS or traction control.

There’s just a thundering 110-foot-pounds of Yankee torque-asaurus to lever majestically through the bends, or to leave rubbery lines of hatred off the lights.

The riding position is all relaxed arms-down and feet-forward cruiser. And the shocks are fine for belting around town and being sensible. Though they do tend to struggle a bit if you start asking questions the Eight-Ball’s not happy answering. Running away from the police is not an option. Stand your ground and take your Tasering like a man. You won’t be outrunning the Highway Patrol. 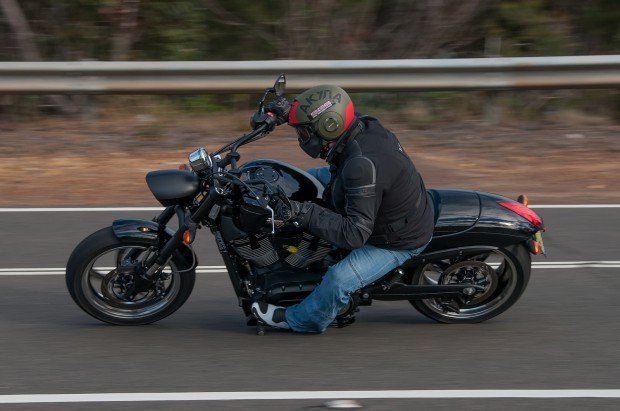 Plan them, commit, stay brave. I’m talking about corners. Though the same can apply to women. 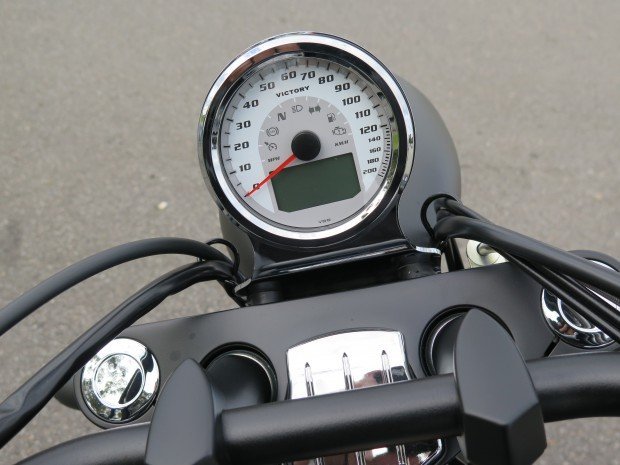 When the numbers get small, you should not even be looking at them. 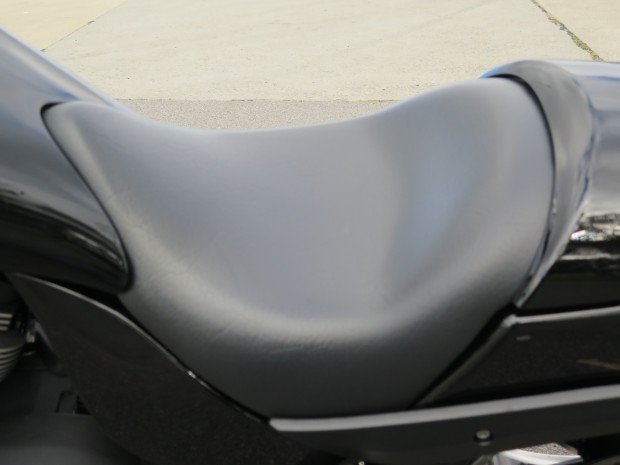 Comforting, black and simple. Like a good coffee on a cold night in a jail cell. 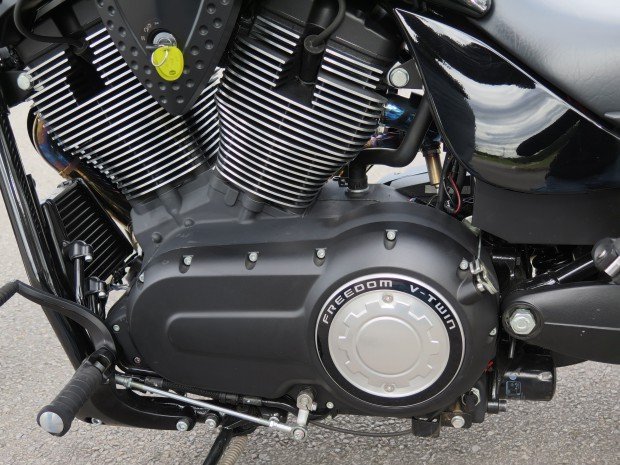 Thankfully, they refrained from calling it the Democracy V-Twin.

Ground clearance is good, in relative terms, but a Sunday arvo through your favourite swervery will grind down your boot-heels some. Get a little more serious and there’ll be scuff-makrks of heroism on the bottom pipe in right-handers. You don’t wanna know what happens if you keep pushing after that, but you can probably guess. Yep, lots of commiserations on Facebook from people you don’t know. As Woody Harrelson’s True Detective character said to the two young men he’d caught rooting his daughter just before he beat them like Sudanese slaves: “Play a man’s game, pay a man’s price”.

And there’s a price to pay for having a fat-tyred girl like this at your disposal. But it’s not a very extravagant one. Hard-cornering will require a little more input and dedication from the rider than it might on an Gixxer. Bikes with fat rear tyres don’t just volunteer to tip easily into bends. They have to be told.

The rider’s seat is comfy and there’s a pillion-seat hidden under the rear cowl for a pretty girl to sit on. She’s going to have to carry the cowl in her hand-bag if you pick her up after a night out with the girls, but I have found that women are usually amenable to anything after they’ve been out on the vodka with their girlfriends. And they usually have big handbags. 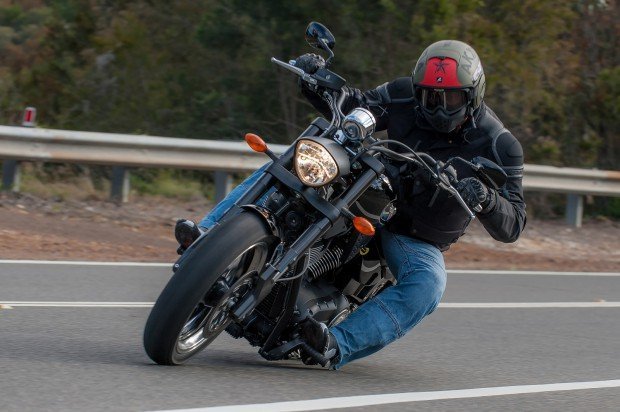 Push hard on that left-peg. No. Harder. 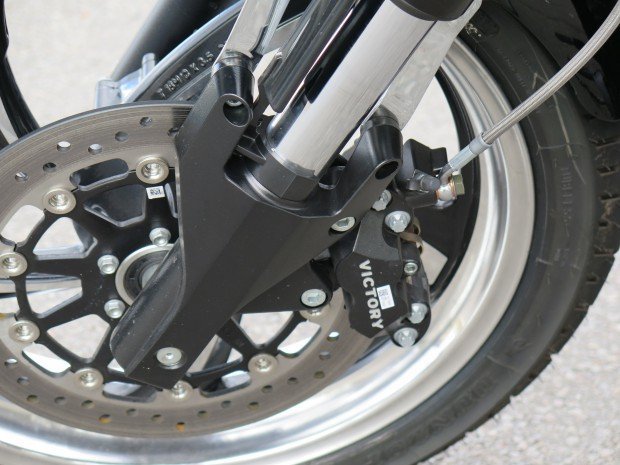 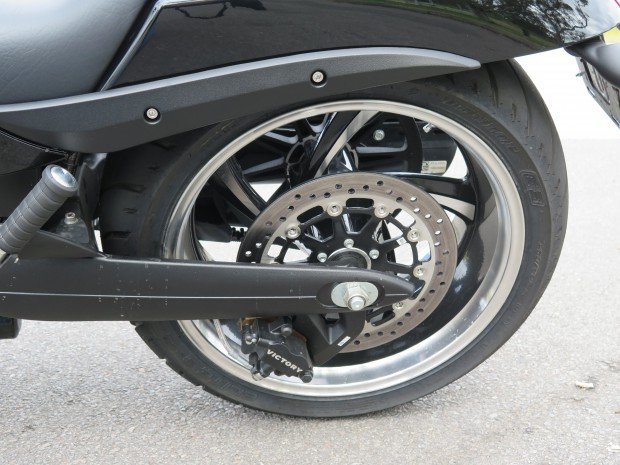 …but you’ll need to use these too.

High-speed stuff is problematical. Firstly, there’s not a lot of it available. Like all big American twins, the stock pipes-and-air-cleaner set-up does tend to choke the bike up some. Experienced players will be fitting aftermarket pipes and high-flow air-filters before taking delivery of the bike. But velocities over 160 are…um, unpleasant and not in the Eight-Ball’s design brief. Do understand that before challenging someone for a podium.

In terms of longevity, Victory has certainly made its bones. Their bikes tend to be bullet-proof about the engine and gearbox and that is always comforting.

The range of accessories is substantial and constantly being added to. So you can easily make the bike your very own without resorting to hard drugs, gas-axes and long nights of swearing in your garage. 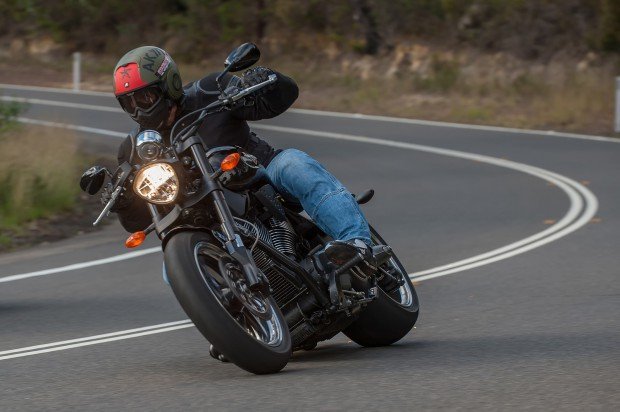 Sparks. It makes them. 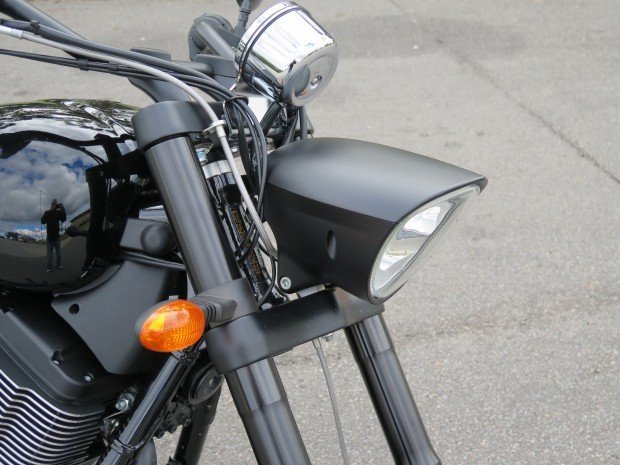 The headlight actually works better than I thought it would. But headlights are never bright enough for me. Maybe I should stop riding around at night in sunnies? Nah. 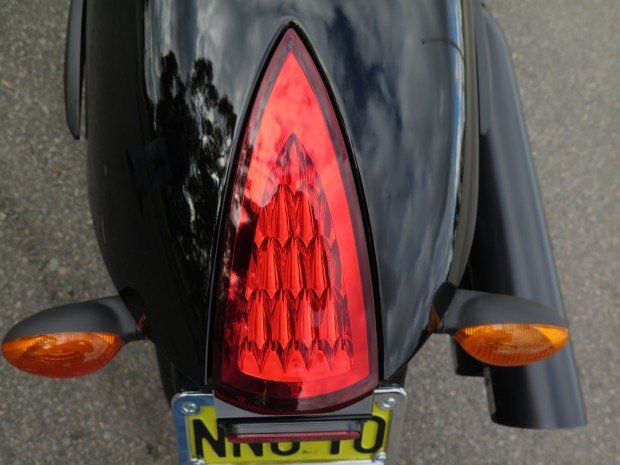 LEDs. Lots of them. 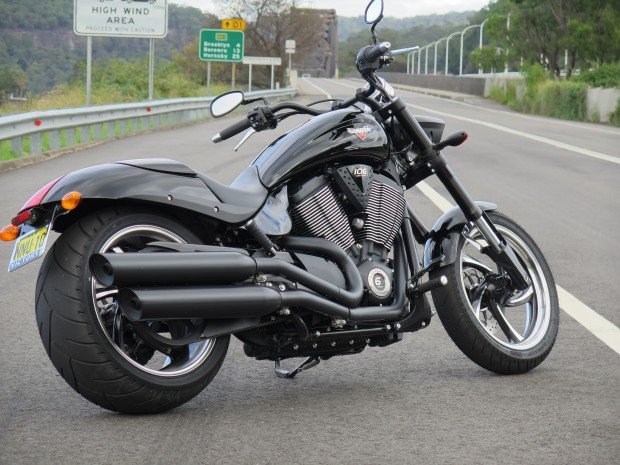 It’s like Victory made the stock pipes so you could throw them away at the first opportunity.

In its stock form you will struggle strapping stuff to it, so you might wanna give that problem some thought before deciding to ride to Perth. The space behind the seat is curved and painted and any attempts to tie bags or swags to will require a Master Level of ability. Do not be dismayed. Such things are character-building. And the Road Gods know we could all use a little more of that. 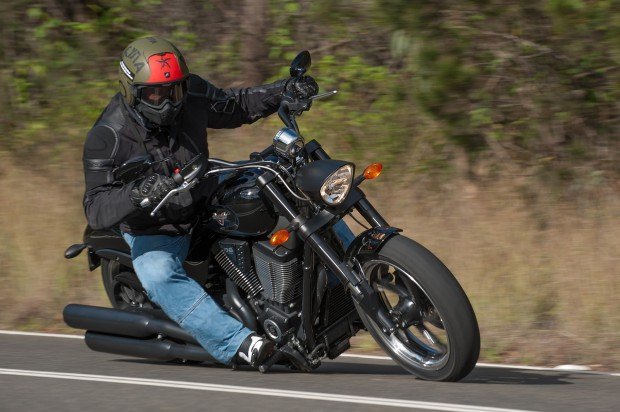 “No, you’re going around here, like it or not.”

It’s geared kinda high, so you spend most of your time around town in fourth, but its engine is smooth and the fueling is fuss-free, and clearly, the Eight-Ball does its best work belting along at about 120 or 130km/h. Any quicker than that, you’re being a parachute and the suspension is educating your kidneys.

The brakes are adequate, and you’ll be using both front and rear if you’re engaged in spirited shenanigans. Unlike sportsbikes, big cruisers require more frequent and more judicious applications of rear-stopper for there to be lotsa smiles at the end of the ride.

The level of finish is good. The amount of black is outstanding. And each time I behold that gigantic back tyre, I grin like a loon. It’s just outrageous.

THANKS TO THE BRILLIANT NICK EDARDS AT HALF LIGHT PHOTOGRAPHIC FOR THE RIDING IMAGES.