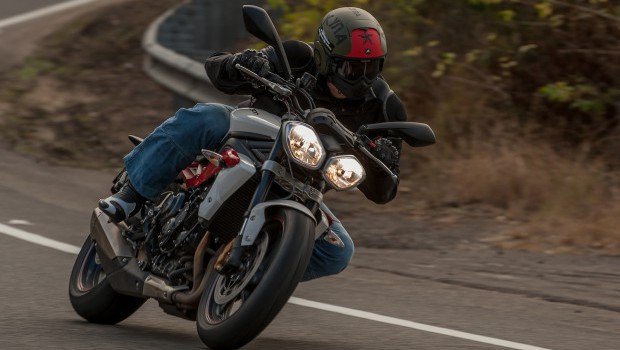 The Triumph 675R Street Triple is aggressively styled. There are those predator bug headlights, and sharp angles everywhere. Even the mirrors are all sharp angles, and seem to be saying “Come at me, bro, and I will cut you” even as they are delivering perfect images of your elbows.

It could be intimidating, I guess, to invalids or nervous people; but if they put those impressions aside, they would find that the Street Triple is a pussycat. It is if you want it to be, anyway. It is a delightful commuter. It is short, and light, and you can put your feet flat on the ground easily. It is narrow, and fits in small gaps, and the motor has an engaging mechanical whistle about it from the straight cut gears driving the clutch and balance shaft. 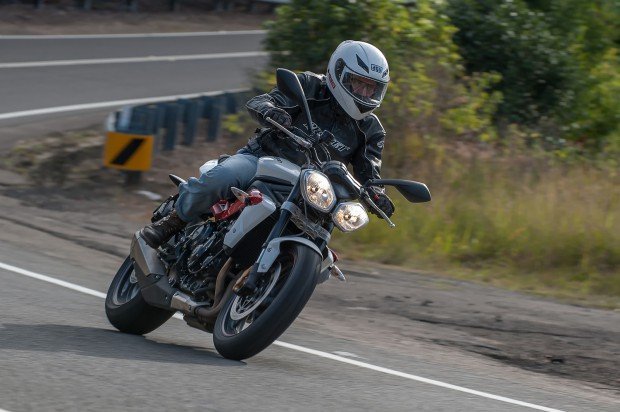 Al, not being intimidated in the slightest. 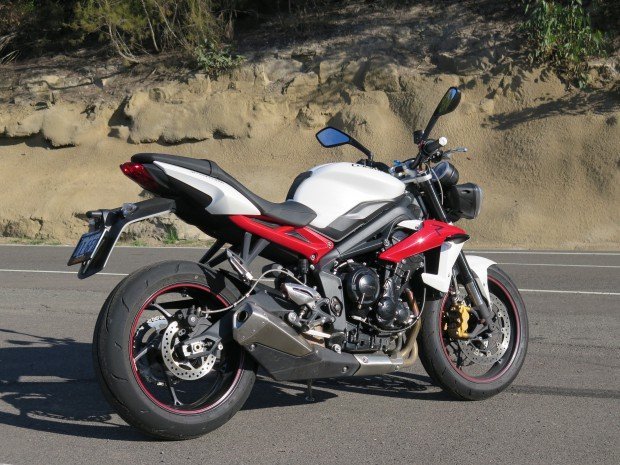 Yes, that exhaust pipe would be among the first things to end up in the local landfill. 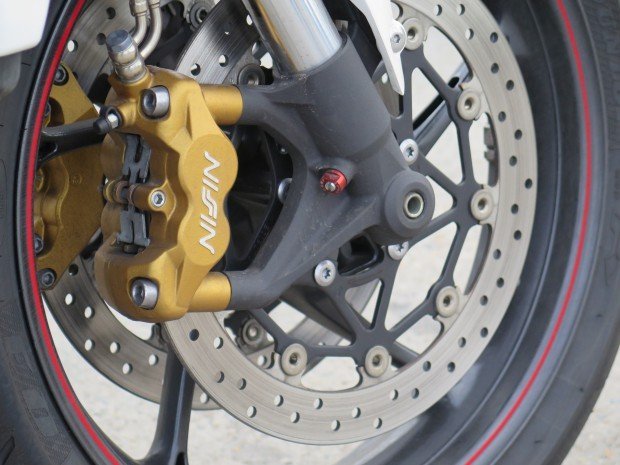 The motor, you quickly find out, is superb. The Triumph 675 has to be one of the all-time great motors of motorcycling, right up there with the airhead Bimmers, the C90 and the CB750 and the Z1. Originally installed in the Daytona 675, where it made 123 bhp, it now graces the Street Triple R in a slightly de-tuned state, making 106 bhp. It is glassy smooth. It has that pleasing whistle at commuting speeds. Then you maybe get away from a set of lights a bit more smartly and you find that the whistle turns into a nasty snarl a bit before the centre of the rev range. If you keep it open, the nasty snarl turns into a glorious howl as the Street Triple cries “Havoc!” and lets slip the dogs of war.

The fuel injection system is calibrated perfectly. I dropped it back to 40 km/h — 2000 rpm — in sixth gear, and then slammed the throttle wide open. It pulled cleanly with no snatching or jerking or bogging and, 1000 rpm later, started making very good time indeed.

And that’s another thing about the motor. Triumph say it makes peak torque of 69Nm at 9750 rpm. But it makes more than 58Nm all the way from 3000 rpm to 12500 rpm. Also, it only weighs 182kg wet. Traffic light getaways are fast and effortless. 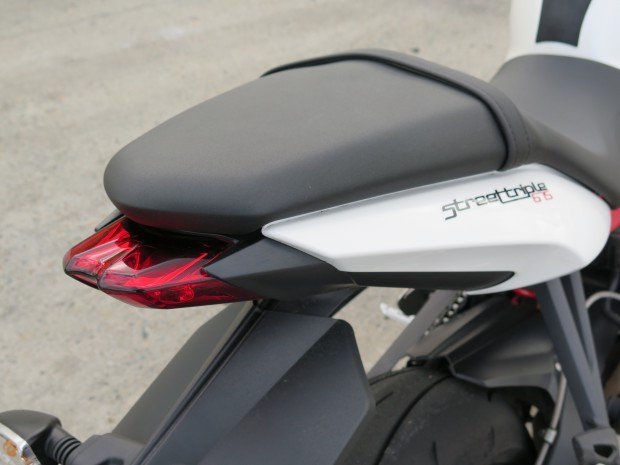 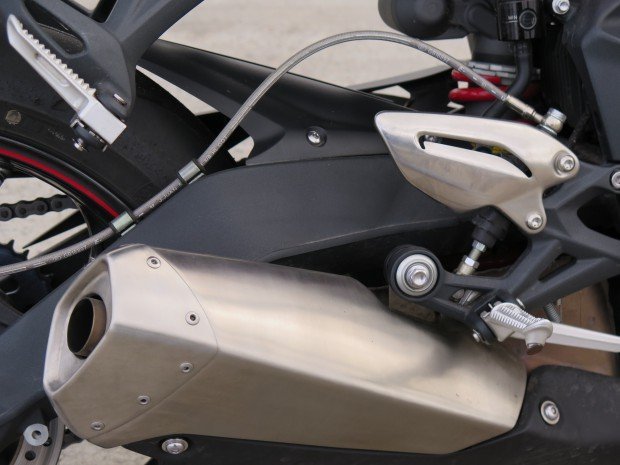 Ignore the muffler and admire the beautiful braided line. 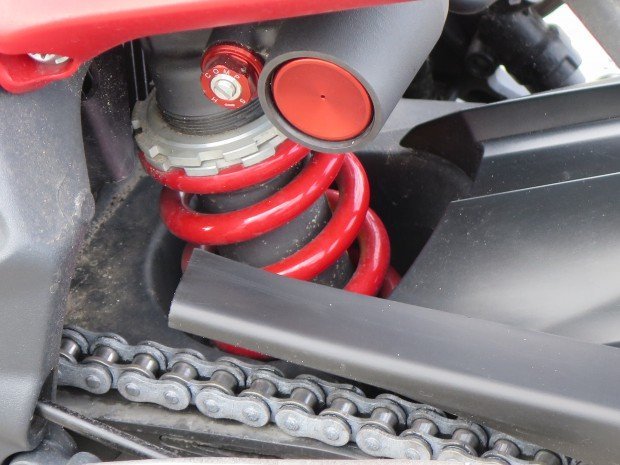 On the expressway getting out of town to stretch its legs, I experimented with the instruments. Besides the big digital speedo and analog tacho, there are all sorts of cool stuff, which can keep you amused for hours. There are two trip meters. Each one of them can display elapsed kilometres, average fuel consumption since it was zeroed and riding time since it was zeroed. There’s a gear position indicator, a tyre pressure readout for each wheel, a fuel gauge, a clock, a current fuel consumption indicator, and a kilometres to empty indicator.

Oddly for a bike of this size, you can leave it in top gear a lot. Overtaking is swift and painless due to that strong torque curve. There’s a 9500 rpm wide range of torque above 58Nm. That means a choice of three or four gears for any situation. A lot of the time, it may as well be top. 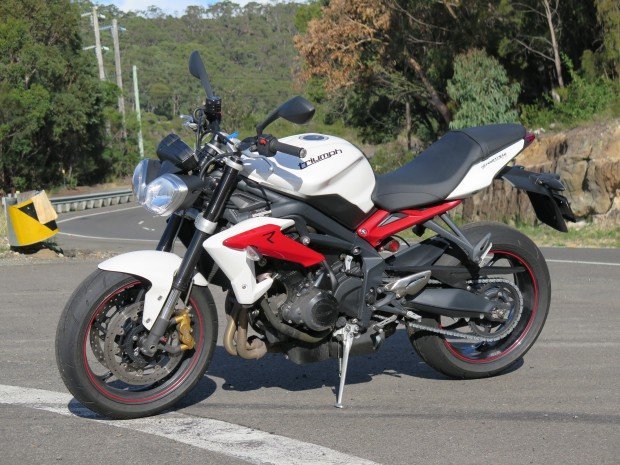 Lots of owners ditch the standard mirrors in favour of bar-ends. Understandably. 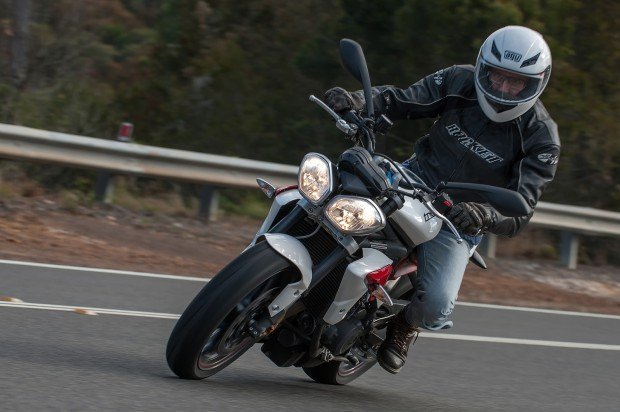 It’s easy enough to fall in love with it just on the basis of that engine. When you hit some swervery, though, you find that it has a first class chassis and suspension package. Wheelbase is on the short side of medium at 1410mm, and if you want it to, it turns really quickly. I couldn’t detect any trace of chassis flex, even over ugly bumps on sweepers. The front suspension comprises Kayaba 41mm USD forks with adjustments for preload, compression damping and rebound damping. They are rigid and supple and well damped. The rear comprises a Kayaba monoshock with the same adjustment options as the front and a remote reservoir. I couldn’t fault it.

When the going gets REALLY tight, you also find out that the gear ratios and spacing are superb, too. Many bikes have a bigger gap between first and second than between the other gears. The 675R doesn’t. You can come belting into a hairpin turn, engine brake cleanly all the way down to first, turn it in, lift it up on the throttle and exit like a rat out of a drainpipe.

It is most satisfactory. 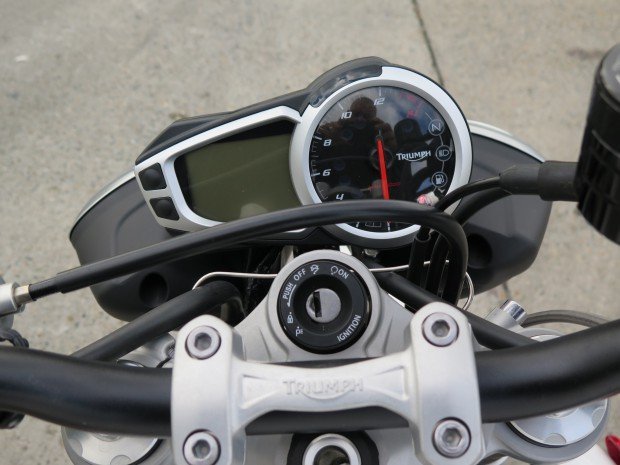 That clutch-cable interferes with the fork down below the lower triple clamp at full right lock. 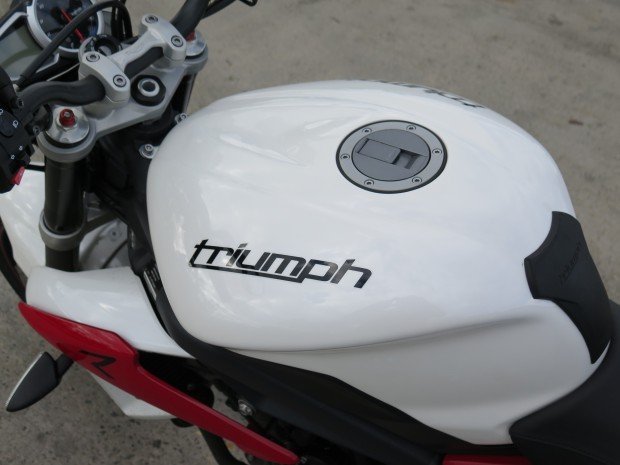 The level of finish is quite top-notch. 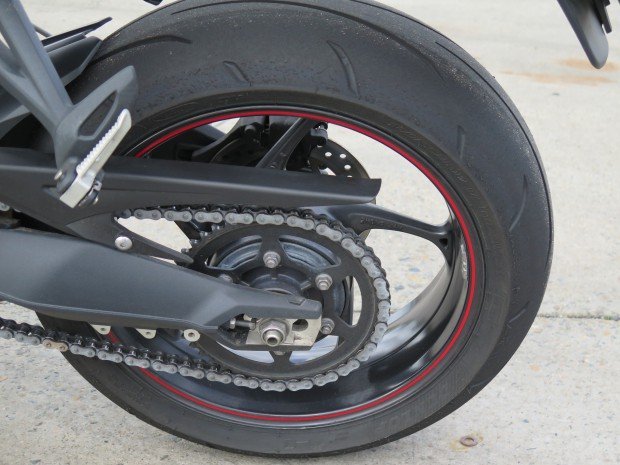 We tried to minimise the chicken strips so people wouldn’t point and laugh.

The brakes are superb, too. The Nissin 4-piston radial front calipers help turn two fingers of pressure into savage deceleration. There’s nothing wrong with the Brembo at the rear, either. I thought the press bike had ABS, but while it had the sensor wheel on the front left disc, it had no sensor.

The bike averaged 22.7 km/l while I had it. That is outstanding fuel consumption from a high performance engine tuned to make 157 bhp/litre. The tank capacity is 17.4 litres, so you should get a cruising range of well over 350km. An amber light comes on in the tacho and nags you when the kilometres to empty readout is about 90.

I won’t go into aesthetics. I think it looks okay, and its looks certainly wouldn’t get in the way of me buying one. The quality of finish looks superb. Honda level superb, even.

So far, we’ve got one of the great motors of motorcycling history in a taut and rigid chassis with top-shelf Japanese sports suspension and a quality finish.

Reliability? A glance through the 675 Internet forums indicates that the motor is as tough as a cat’s skull. 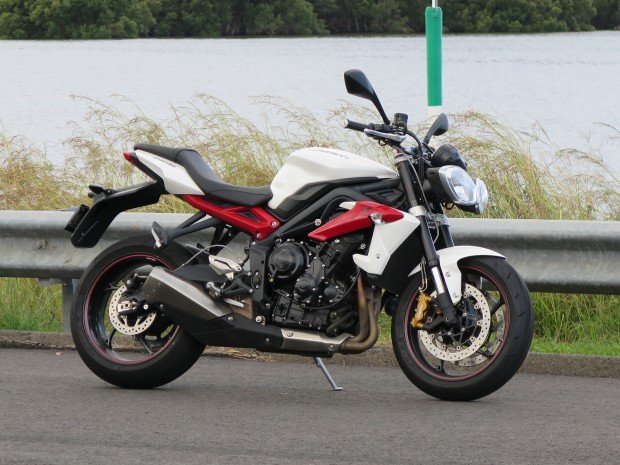 Built tougher than a cat’s skull.

Another, the pillion accommodation is poor. It wouldn’t work for long rides with a friend. Yeah, I know it’s a sports bike.

Ironically, given that Triumph brag that they increased the steering lock on the 2013 model, the right side fork tube fouls the clutch cable at full right lock.

And in casting around for more things I don’t like about it, I have to finally admit that I got nuthin’.

There’s a very good reason the world’s motorcycle media froths in the underpants about Triumph’s Street Triple R. If you were to believe the Pom bike press, it’s better than getting India back, Thatcher hanging from a pole and Tony Blair being packed-raped by a tribe of gibbons in Whitehall. 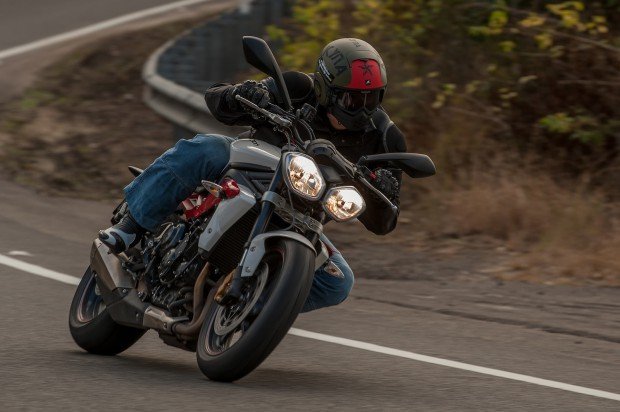 If I could turn back time…

The Poms are really quite emotional swine about their native bikes.

I like the hell out of it despite the fact that I’m just too damn old to ride it like it wants me to ride it.

And it wants me to ride it like I’m crazy on tequila with the stench of strippers on my clothes and some whore’s lipstick stains on my jacket.

Where the hell was this thing when I was 25?

Here is a motorcycle ready-made to be ridden like a missile through empty city streets and deserted back-roads.

Here is a motorcycle that handles brilliantly – taut, laser-accurate and without special urgings needed from the rider. 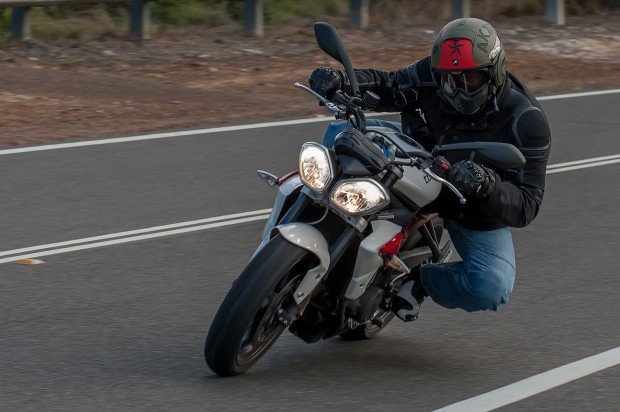 It’s light and it feels light.

But it’s that motor, its gearing and the fuelling which are, in concert, simply extraordinary. It can idle along through traffic in top gear, and punches cleanly from 2000rpm if that’s what you’re doing. Or it will scream its lightweight head off when you start spasming through the gears and riding it like maybe the cops are chasing you.

Stylistically, I think it’s a little busy and trying too hard to be edgy, but beauty is in the eye of the beholder, and there is no mistaking it for anything else, except maybe its bigger and even more exciting brother, the Speed Triple.

The suspension is like a Russian gymnast’s stomach – firm, smooth and very effective, even when you’re substantially proportioned, like me. I did feel a little large astride it, but not in a way that made me uncomfortable around town. The ergos would probably suit a bloke with a slightly less mighty build than me, which is why I think Al loved it so much. Al also cared about pillion-comfort, but I have never given a thought to rubbish like that. If she loves you enough she’ll get on the back, hold on tight and thank her lucky stars she’s got a man who rides a motorcycle to squire her around. 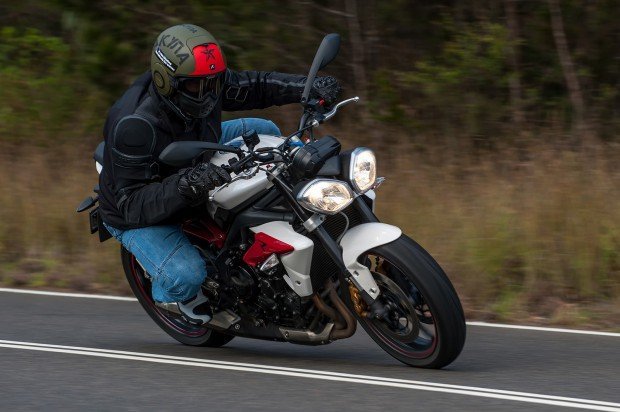 Essentially, the Street Triple does its very best work around town and on short hauls. Of course, you can get on it and ride to Moscow if you’ve a mind to, but it’s not really designed to do that kinda thing. It will also not keep up with psychotic lunatics on high-powered Japanese and Italian motorcycles who are more than happy to ride at 250-plus km/h on sweeping back-roads because they are in a hurry to get to a certain pub. The Street just does not have that kinda top end. But get it into the tight stuff, where skill and a double helping of testicles are what it’s all about, and it is not giving anything away to bikes that have more of everything.

It is a very easy bike to live with and love deeply. And it would make one hell of a brilliant track-day toy if you spent a lot of time at tight tracks like Sydney Motorsport Park.

It really made me wish that I was younger. And I’m just far too old to be wishing such things.

THE KILLER ACTION SHOTS ARE THANKS TO: Nick Edards at Halflight Photography

The detail shots and statics are Borrie’s.