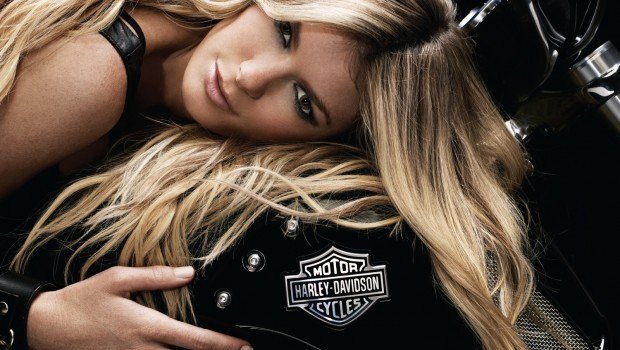 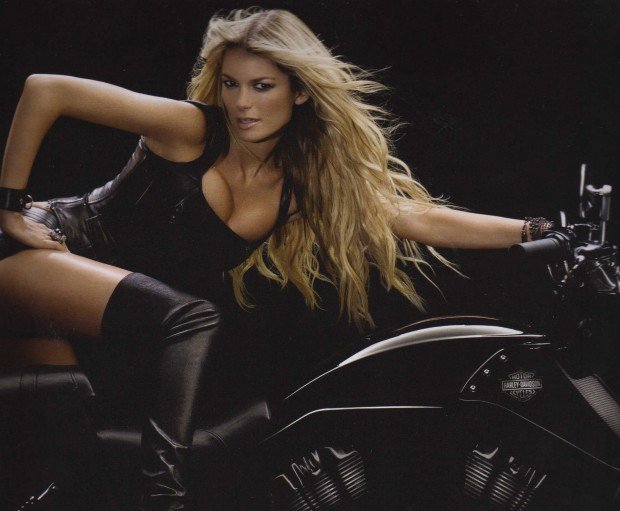 This is Marissa Miller and the VRod Muscle. Marissa is the blonde

Just quietly, the 1250cc donk powering the VRod is one of the greatest V-twin engines ever built. Responsive, powerful and eager to rev it’s fool head off, my every session with the VRod became some kind of Saturday night showdown-and-strip-club tour. Sure, there’s not a lot of joy to be had trying to carve bends with that wheelbase and rear tyre, which has more rubber than a Malaysian plantation, but we all know that’s not what this bike is all about.

I lost count of the number of times people made admiring noises at it, which was equal to the amount of time they asked why it was so quiet. A perfectly reasonable question, given that every VRod banging around out there, except this stock one, sounds like an avalanche crushing a mountain village.

The Muscle is the mega billet version of the normal VRod, and boasts more angular lines and altogether more brutal appearance. The headstock, handlebars and swingarm are true billet masterworks, and owners will happily buy shares in Autosol to keep the bastards shiny.

Lots of arse-steering is the go when the going gets purposeful, and ground clearance is at a premium. Listen to your boot heels, pilgrims. They will kiss the ground first, followed by the pegs and then all sorts of expensive stuff you don’t want to be replacing. 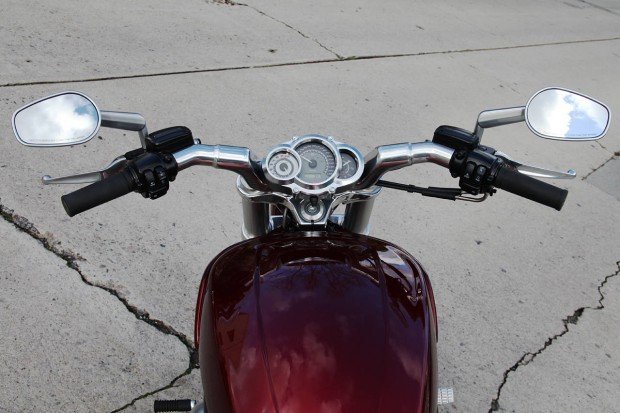 It’s rather joyous around town, spearing off the lights at a rate that surprises many other bike riders, and fitting into traffic gaps that astonishes all the car drivers. It’s got one of the lowest seat heights around, so it’s quite easy to manoeuvre around, even if you’re shrunken about the nethers.

It’s also quite a capable touring bike. I took it to Melbourne and back for Harley’s 110th birthday bash and was overjoyed to discover that its happy place was between 140 and 150, and that it actually had three different seating positions, thus allowing you to spend a whole day in the very comfy saddle and not have to be assisted into the pub by caring friends. I utilised Position Two the most on the highway, which places my feet on the pillion pegs and allows me to sit on it like a normal motorcycle. Position One is feet forward on the pegs and Position Three is with your ankles draped over the pegs. Do I need to tell you that you can only really operate the gears and rear brake from Position One? I hope not. So while Position Two is pretty good for spirited cornering, you’re kinda limited in gear selection and braking power. And it’s no lightweight, so choose wisely and brake early.

If you do that, the Muscle will put a grin on your face that’ll pin your ears back. 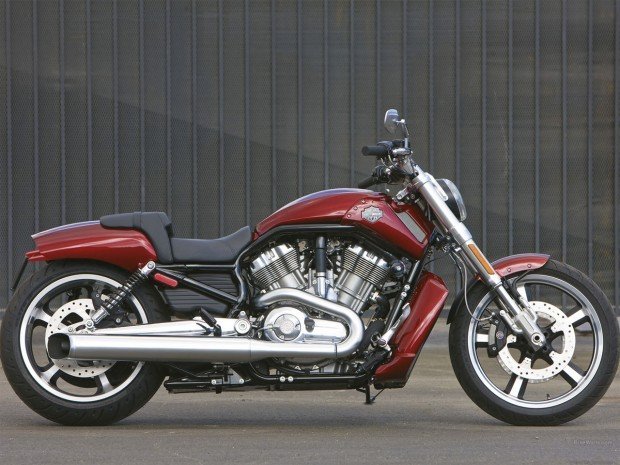 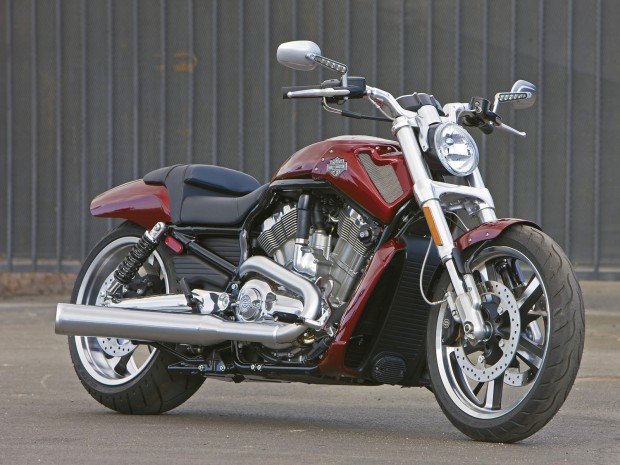 The engine-gearbox combo is simply divine. The five-speed box is perfectly ratioed and the bike is far smoother to ride than the normal Big-Twin Harley. And heaps, heaps, heaps faster and more responsive. You’ll remember to thank the clever people at Porsche for their good works in that regard. That altogether bullet-proof powerplant is their baby, after all.

The ground clearance is, actually. It’s more than you first think it is going to be, given the bike’s super-low profile, and that’s a good thing. Also, the finish is second-to-none. The paint is a lustrous and the alloy work is overwhelmingly beautiful. And, thanks to two strategically placed slots above the rear side reflectors and some Andy Strapz, luggage can be and was attached with ease. 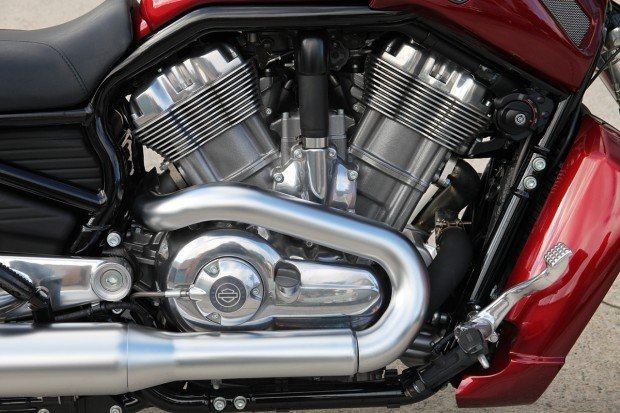 I found the suspension to be rather medieval in its behaviour. Certainly, the back can be adjusted for pre-load, but it’s a zero-sum game. The front is what it is. It’s fine when you’re on smooth roads and your speed is saintly, but start banging it around the boondocks and you’re gonna start shopping for new suspenders once your kidneys have de-bruised.

The brakes are rather wooden and could do with a little more bite. I also thought it weird that the speedo numbers were small and painted grey (the rest of the speedo art is white) and thus very hard to see during the day. Would it have killed them to make the numbers white? Obviously. The headlight is also a work of dire nonsense. Low beam is just okay, but because of the way the headlight is designed, high-beam will sear your eyeballs as it reflects from the top of the glass shell and illuminates the stratosphere way above your sight-line somewhere.

Yes, I am going to say lose the pipes, but there’s two reasons for this. One is that you need it to make joy-noises. Otherwise people will point and laugh. The second is that you will burn your left leg on the left pipe if you’re not wearing boots. It sticks out a fair bit, and your calf will brush it if you’re paddling your bike around at slow speeds. 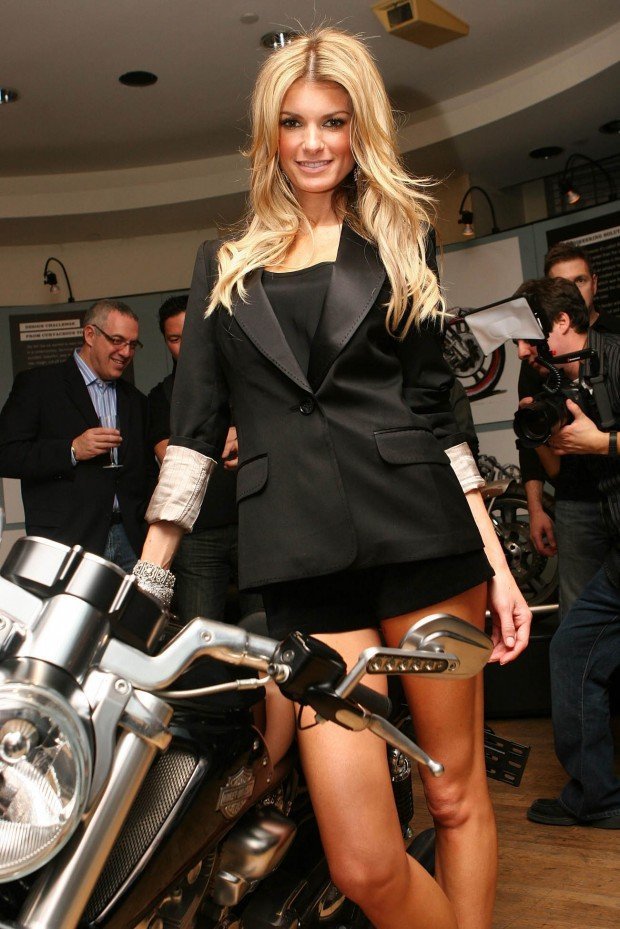