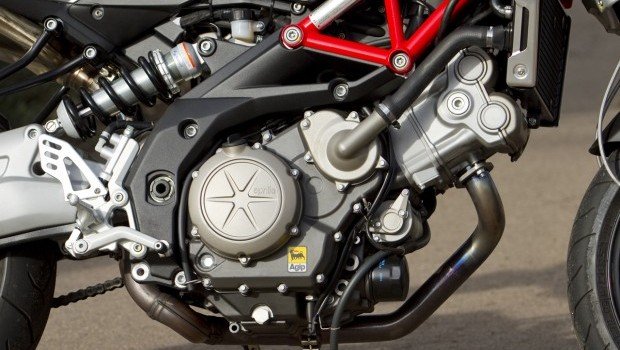 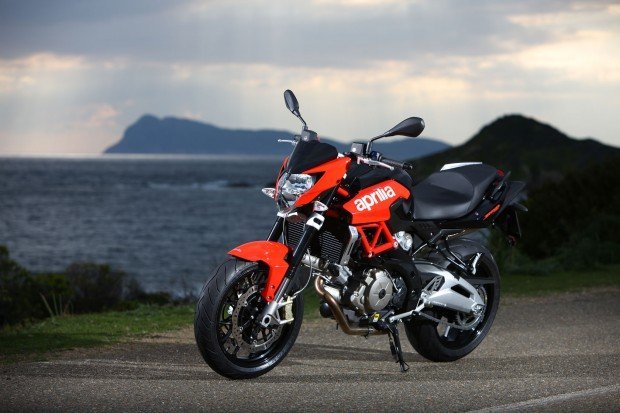 All bullshit aside, Aprilia builds some of the best-handling bikes on earth – and one of them is the Shiver Sport. It is just wonderful in the tight stuff. Precise, positive and totally life-affirming – if you’re not smiling after lashing its 81Nm of torque-rich twin through a series of bends, you’re just not living right.

When I first threw my leg over it, it felt like a big motard. And at low speeds, inching through traffic, the sense that you’re riding a big, meaty dirt bike is ever-present. And that’s fine and even welcome in peak-hour, where sportsbikes can be a wrist-aching chore. The Shiver’s wide bars, snake-hipped slimness and easy-on-everything ergos make it a real pleasure to commute on.

But give it a little urge and show it some open road, and quite suddenly, the Shiver transforms into another motorcycle altogether. It’s geared to do 140km/h at 6000rpm in top– and that is its happy place. It’s no missile, topping out at 186km/h (a slightly less generous version of me could certainly coax it over the 190 threshold), so it’s not like you’ll be hunting down Gixxers on the open road. But it gives nothing away to any bike in terms of handling and agility when the corners get sharper and the surface starts to challenge. As long as you’re not afraid to use that gearbox, the Shiver delivers the grin-factor big time. 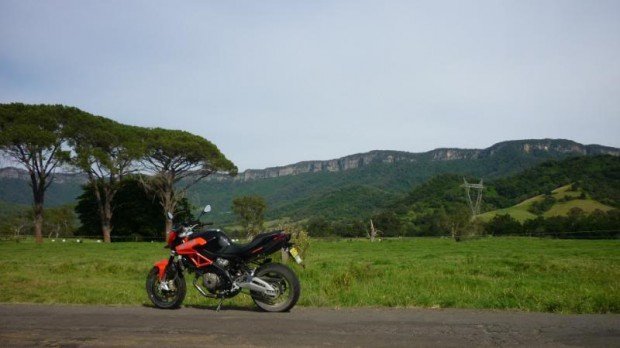 It looks like Africa. But its ‘just a few kay outta Dapto. 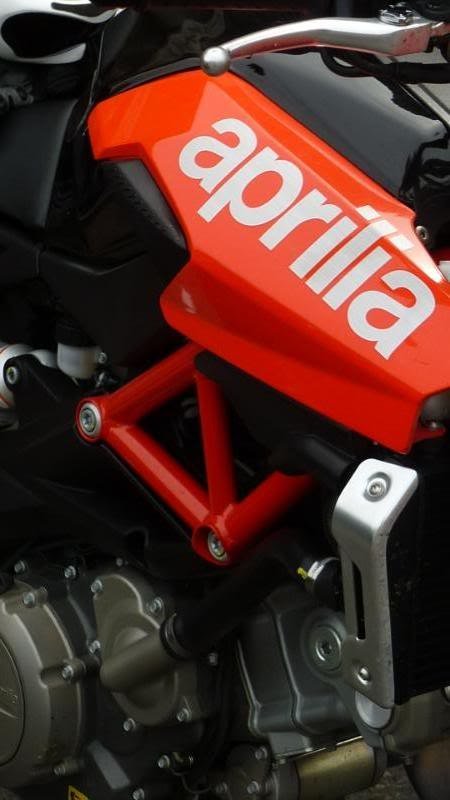 I did some big 900km days on it on roads ranging from super smooth to “I wish the State government would kill itself” and the smile didn’t leave my face. The bike does everything rather well, looks marvellous in its new livery, and the finish is top-notch. The gearbox is positive, and changes quietly and efficiently, which is good cos you have to work it to get the most out of the 95bhp 750 V-twin, but I’m so good with that.

I was left wondering how sensible it would be if bikes like this were made available to learners or those returning to the handlebars after years in the wilderness. But sure-footed confidence builders with magical handling credentials, fabulous braking packages and sexy Latin looks are denied, by government decree, to the people who’d get the most benefit from these qualities. Go figure.

There was only one incident of note, and that was the unprecedented failure of a gear ratchet finger, leaving the Shiver trapped in fourth gear. The techs had it sorted within an hour and the bike was back on the road, none the worse for the experience.

Did that change my mind about the bike? Not in the slightest. It’s a stunning piece of two-wheeled Italianess that’s revelatory and very rewarding to ride. 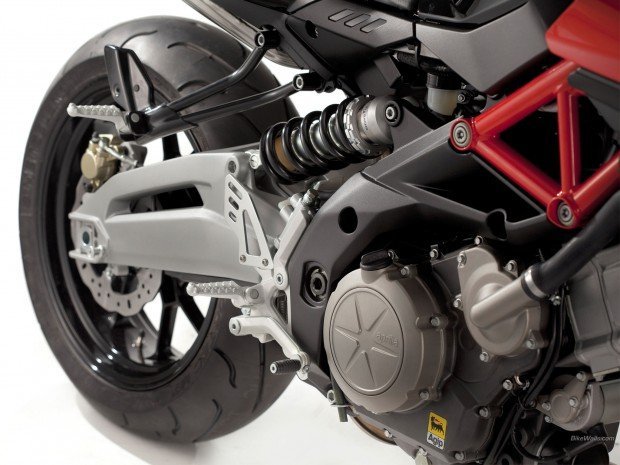 The Shivers cornering ability is staggering. I slammed it up Macquarie Pass and down to Kangaroo Valley at a rate of knots and with a precision of line that left me breathless and somewhat goggle-eyed. I do not ride that well. I know this. But for reasons known only to the engineers at Piaggio, the Shiver had me hooking through corners like I actually had some skill. The riding position is sensational, the motor is willing and the brakes are top-notch. For a bike that actually weighs the same as a Triumph Speed Triple, the Shiver feels lighter and steers much faster through the tight stuff. It’s absolutely confidence-inspiring. Not bad for a bike with non-adjustable front suspension, huh? 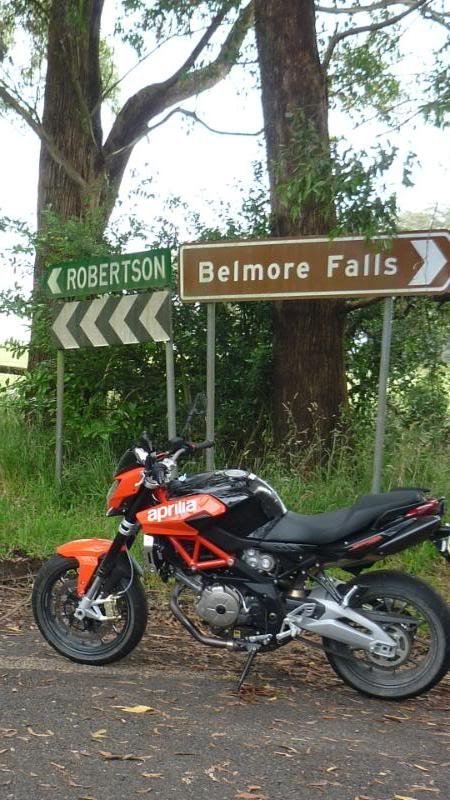 There is a pub at Robertson. There is no pub at Belmore Falls. Just water.

Dunlop Qualifiers. Love them. Always have. They seem perfectly suited to the Shiver and provide supernatural grip and feel. The seat is great – much more comfortable than the first version that came out. Visually, I found the new Shiver quite stunning. Its Plain Jane looks have been pimped with a red frame and traditional Aprilia colours of black and orange, and the styling package just works. Hot office girls smiled at me and mouthed “Nice bike”. Except for this thick-ankled one who clearly hated motorcycles. She mouthed “Piss off, wanker.”

The Shiver is a hot bike to ride. Them high-slung exhausts (when are the factories gonna get over this ridiculous styling nonsense?) might look neat, but the big pipe that runs up the middle of the bike, mere inches from your legs, radiates a lot of heat. It’d be OK and probably even welcome in winter, but in an Aussie summer my thigh meat got pretty toasty. 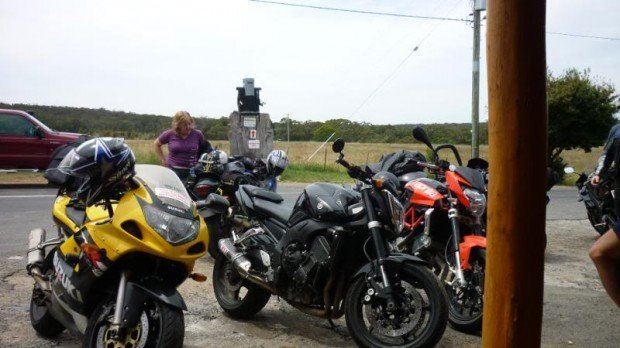 The blinker button was mushy. It worked fine. It just felt a bit gooey. I also thought the dash lights were a bit dull and hard to see in bright sunlight. So leaving your blinker on for 500km is nothing unusual. Hell, it’s not like I’m looking at it. It’s also really difficult, if not impossible, to strap stuff to the back of it without irredeemably gouging up the pillion grab rails. I am a Jedi master when it comes to lashing stuff to motorcycles, but this one had me buggered and wearing a backpack. Like a rented mule.

Immediately put crazy barking cans on it. As enjoyable to ride as it already is, the Shiver’s appeal could be enhanced exponentially with an exhaust system full of hate. I’d actually mount it low, cooling down the ride and sexing up the back end at the same time, but that’s me. 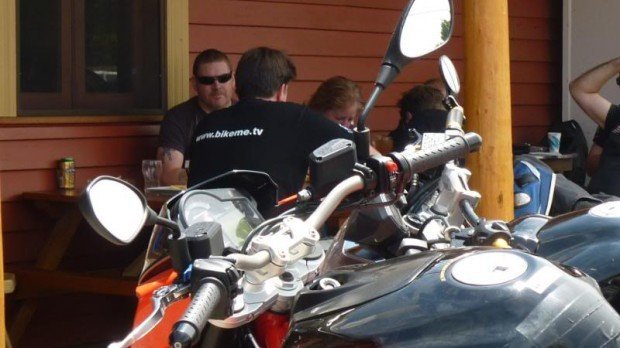 At Nerriga. There’s a pub there too. 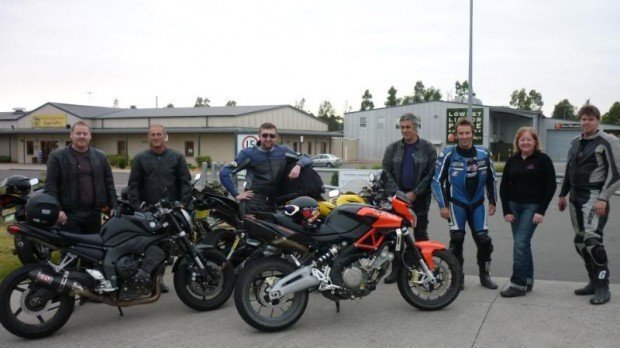