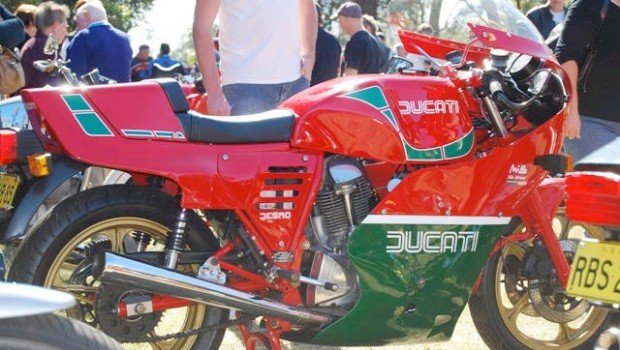 I’m sure they call it Latins by the Lake ‘cos calling it Wogs by the Water would offend the delicate sensibilities of those who choose their riding pleasure according to the dictates of Italy.

Personally, I have few sensibilities that can be offended and as I thundered my way north with The Door and Brother Silverback in tow, I was just pleased it had finally stopped raining.

Sydney had been awash with bastard rain for the last two weeks, which tragically coincided with my stewardship of Moto Guzzi’s altogether glorious 8-valve Griso. This was not a happy combo — even if a great thundering V-twin is quite fun to ride in the wet. Let me assure you it is a hell of a lot more fun to ride in the dry.

And I gave myself over entirely to the Griso’s booming siren-song, revelling in its torque and poking it into bends quite a good deal faster than the Motor Traffic Act would have advised.

The three of us finally arrived at Spear’s Point — the park alongside Lake Macquarie (did you know it’s the world’s largest salt-water lake? No? Neither did I. Do you give a shit? No, neither do I) to be greeted by a rather smaller gathering of Italian motorcycles than I’ve seen in the past.

The lovely fellows from Aprilia and Moto Guzzi had a stand there, as did the equally lovely blokes who import Benellis and Bimotas into the country, and right beside both of them was the big red Fraser’s marquis with all the Ducatis under the sun out the front of it.

There were a fair few punters’ bikes on show and Brother Silverback busied himself recording them all for your viewing pleasure. Sadly, he refused to take any pictures of the half-a-dozen taut-bottomed teenaged girls larking about the place, saying he would feel like a damned pervert. Unfortunately, I did not have my camera with me, for I share no such misgivings. So you’re all gonna have to put up with just bike shots. 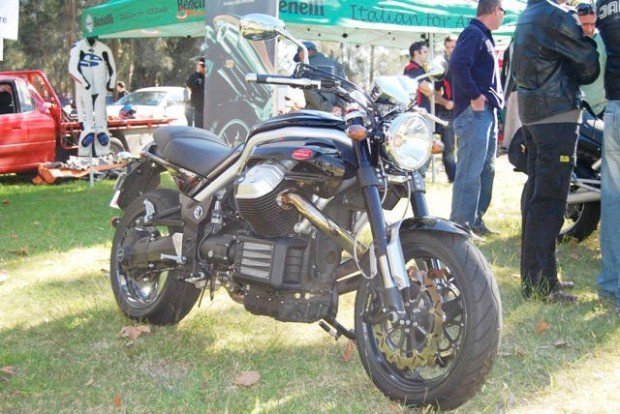 I love the 8-valve Griso. It is beautiful to behold and to ride and to be crazy on. It makes all the right noises and makes all the right moves – sorta like a stripper full of ecstasy that you’ve managed to persuade to come home with you. I will have this bike again, I’m told – but this time it shall come fitted with some hot-shit racing pipes. 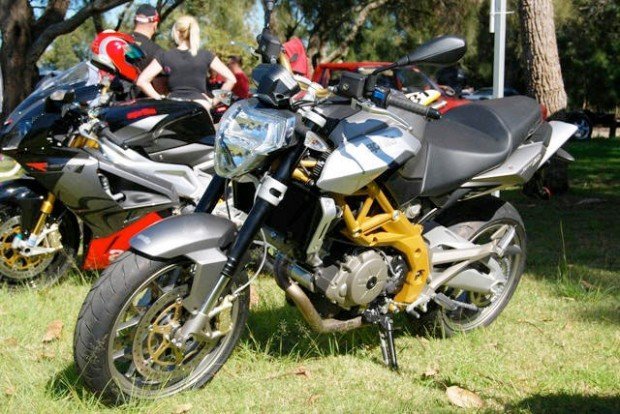 The more I look at the Shiver, the more I start to appreciate its unique lines and promises of sharp steering and light weight. This is why I try not to look at it for very long. 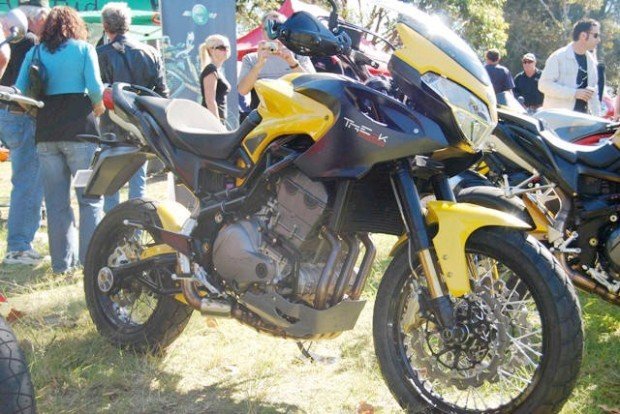 This is Benelli’s TreK. Quite simply, the angriest-looking dual purpose bike in the world. I assume Benelli felt they should make one of these cos some champion rode a Benelli roadbike around the Sahara Desert for a while and didn’t die. Brother Silverback really liked this bike, ‘cos I’m sure he doesn’t want to die in the desert, either. 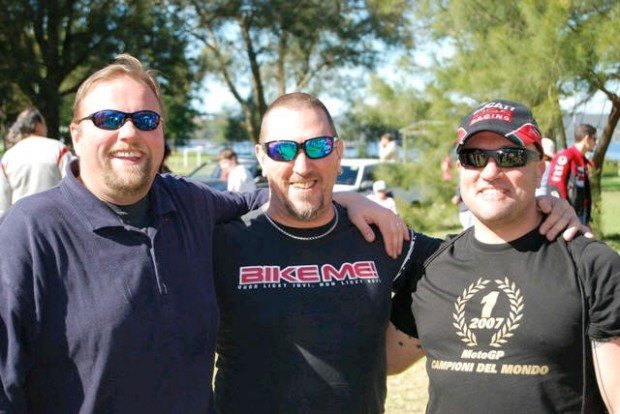 The Door, me and The Bear. We are smiling because we are happy and full of joy and gladness. Our hearts are light and our steps are springy. Someone could have written a folk song about us that day. 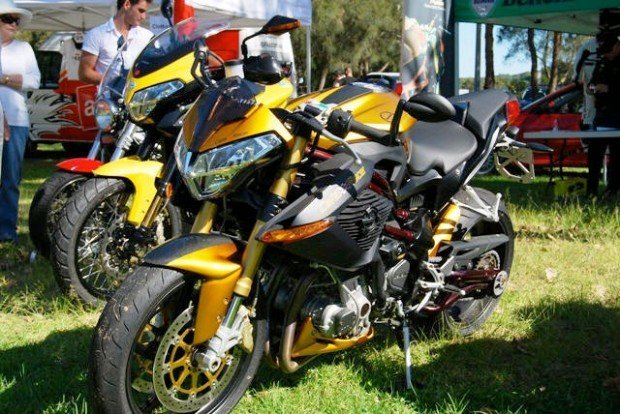 Benelli’s Café Racer is the angriest-looking bike in the world. I spent a lot of time snarling right the hell back at it, ‘cos it always looks like it wants to fight someone. Clayton, who imports them, felt that it and I should spend some time together. I told him I thought that would be a good idea, and advised him to make sure his insurance premiums were up to date. 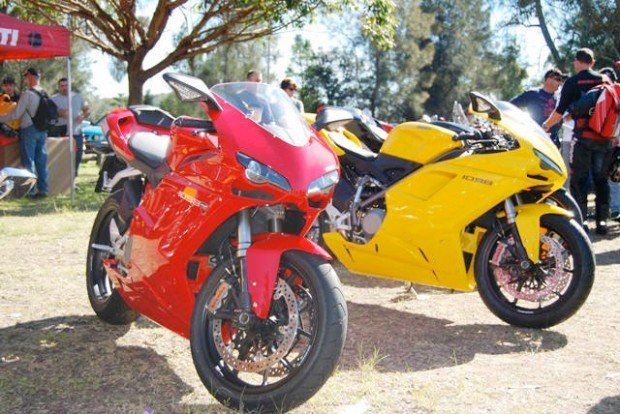 There were a lot of these 1098s scattered about the place. I thought it was kinda neat how they all managed to break down in the one spot like that. 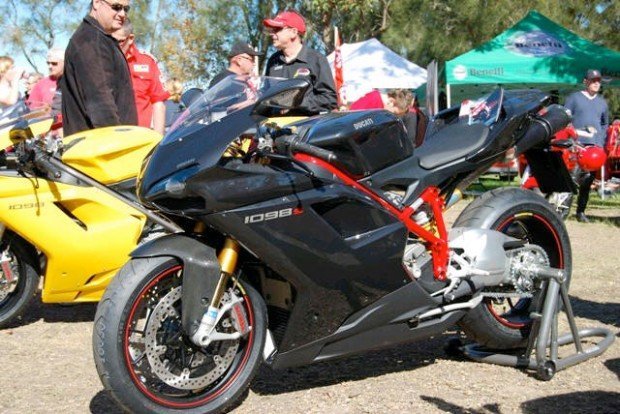 And look, here is a 1098S in glorious black. In my humble opinion, this would be the only colour I would buy one in, hoping that someone would mistake it for an MV Agusta. I’m kidding, of course. I wouldn’t buy one, but if I was going to, it would be black. 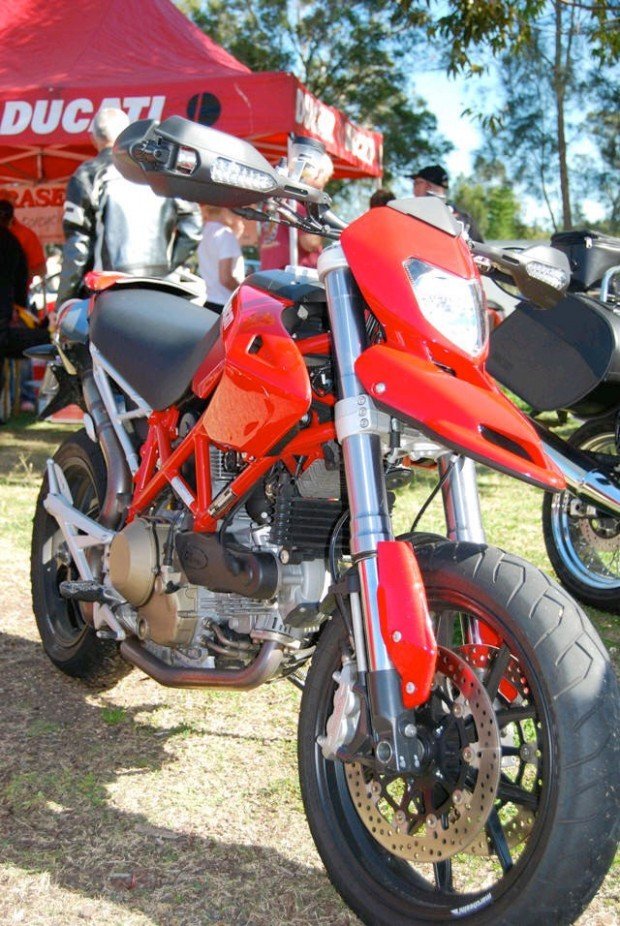 I will admit to having a pulsating chubby for this Ducati. I will seek treatment for this condition. But for the moment, this is the hottest-looking motorcycle Ducati has built since the 70s. 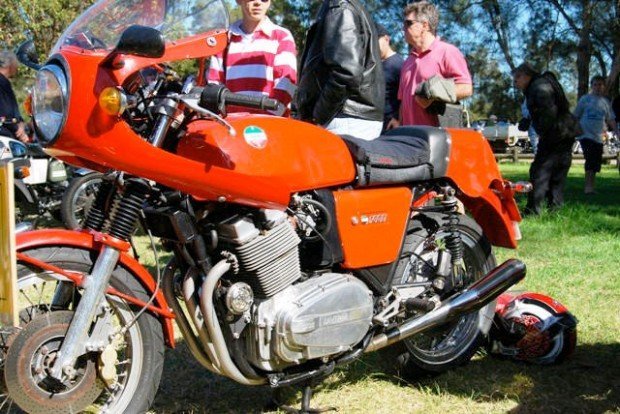 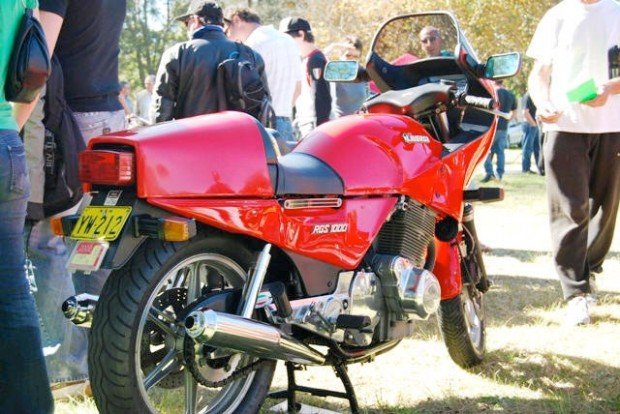 I’m still trying to work out how Laverda figured this hideous contraption was gonna be its salvation. The RGS1000 certainly had the pedigree, but lost it all in the style department. Perhaps the Germans had something to do with the design? 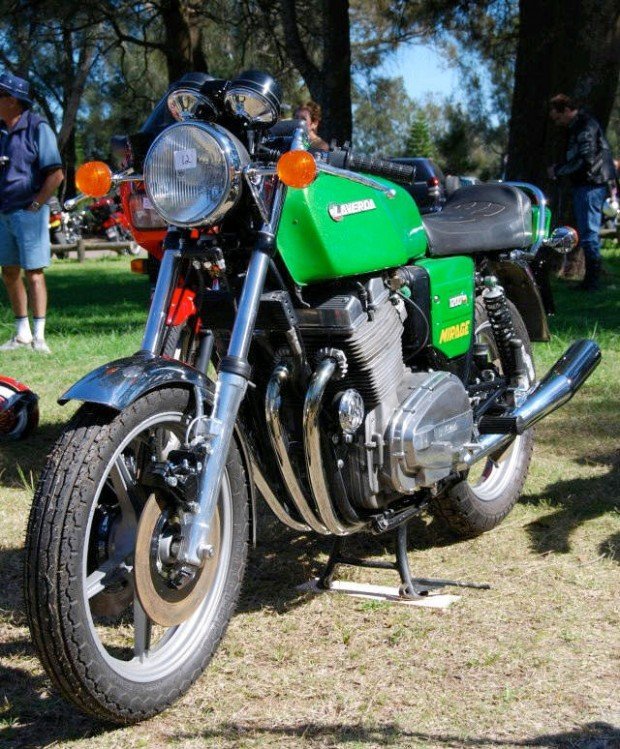 Y’know, the damn things look fabulous in green. This was the “other” Laverda that always moved my swingers. I look at these now and regret not dealing drugs in my youth so I could have bought one like all these other bastards did. 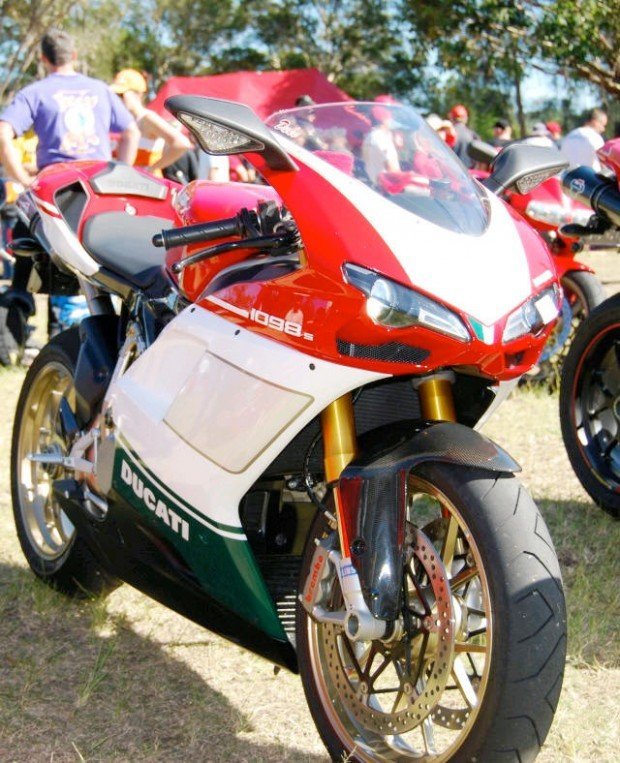 There were several Tricolore Ducati 1098s there. This one looked the most tri-coloured of them all. I had to resist the urge to paint it matte black. 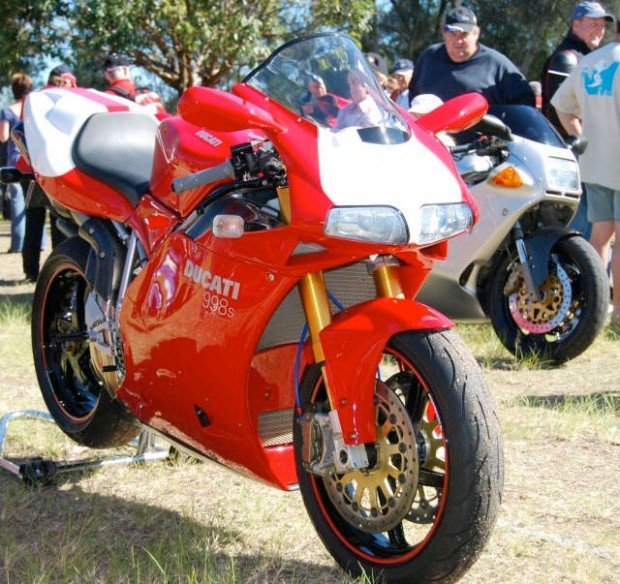 Designed by the Master himself, Tamburini – who then promptly pissed off to MV Agusta to design even more beautiful motorcycles that actually went much faster. 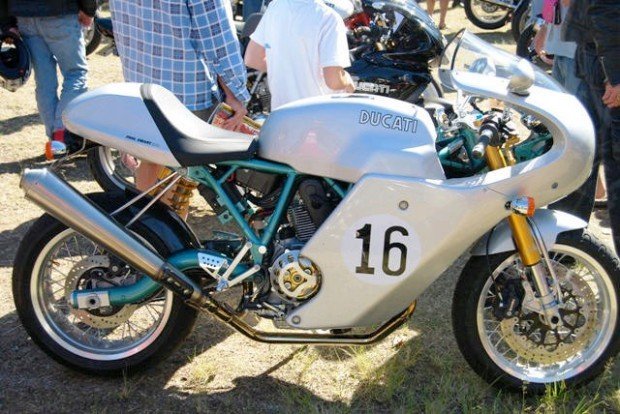 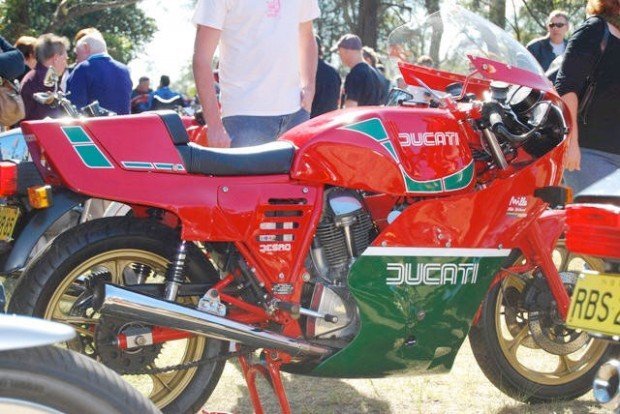 This one reminded me of the motorcycle Island Mick has stashed in his wonderful garage. Apparently, if you put these Hailwood replicas in the sun for a while, it makes them happy. You listening IslaMick? 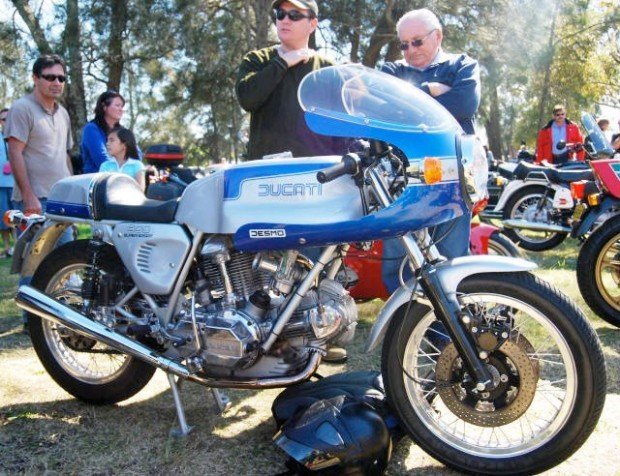 This is the most beautiful Ducati ever made. I will hear no argument. I will brook no dissent. This was pure, eat-my-shit Italian sportsbike. What went wrong after this, I do not know… 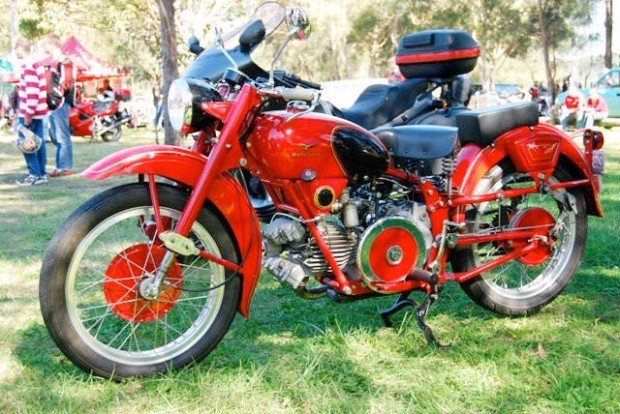 Bet you though all that Moto Guzzi ever built was V-twins. Well, here’s one with a hamster wheel to drive it. And painted the correct shade of red, I might add. 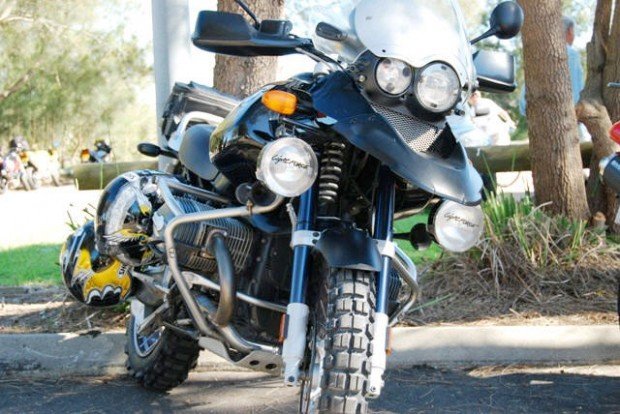 I do not know what this German thing was doing here. Probably laughing at all the inferior Italian stuff before heading off to conquer the Simpson Desert, the Himalayas, Lithgow and Mars. 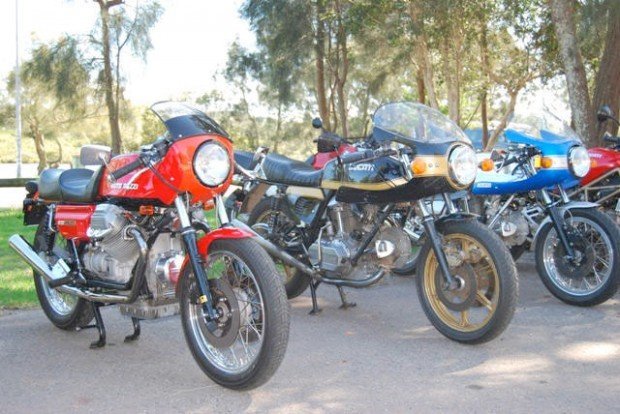 Motorcycles like these used to be parked outside pubs I used to go to every week. But now that I think about this, they are probably still parked outside those very same pubs ‘cos the owners couldn’t get them started. 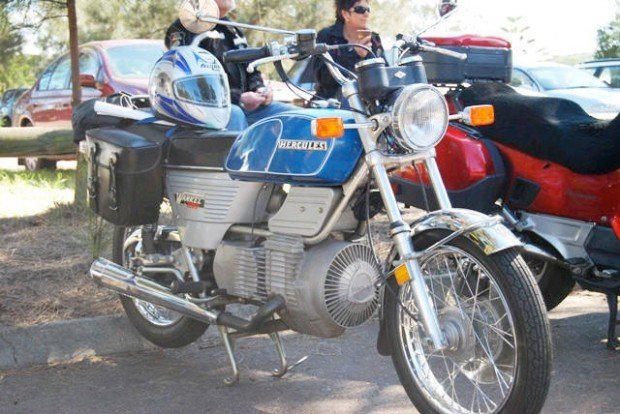 It’s not everyday you see a Hercules Wankel-engined rotary. In fact, I’d never before seen one in the flesh. Built in 1972 (I believe), this masterpiece of obscurity was out in the carpark, largely ignored by young people and those bastards who care nothing for strange motorcycles