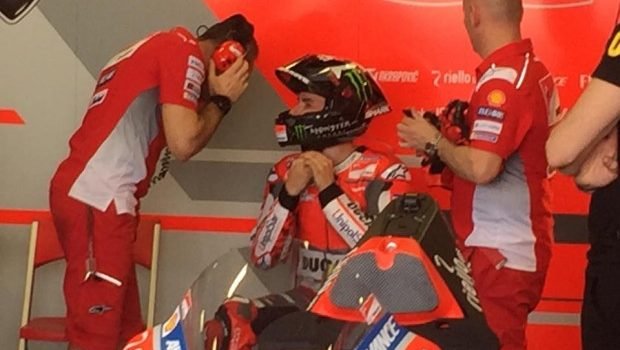 “What’s also highly likely is the rat-plagued sewer my wretched life has become since I became your minder here at Ducati, will have more and bigger rats injected into my suffering.”

Stop it. A big yellow camel did not run out onto the track. We do not need to open the Ducati arms cache and set off in high-powered four-wheel drives to hunt down the “giant, stinking, long-necked, spit-carpet”.

The telemetry shows a savage application of front brake, then a swerve to the left, then sand-sky-sand-sky-sand-girl noises.

Sure, it is entirely possible the Japanese sex-octopus jammed an erect tentacle into the Mambadromic vagina-valves causing the rear tyre inside the rear-wheel bouncy hold-brace (the tyre which you insist is made from the fat of hateful French pigs), which in turn filled the blood-gills of the fairing with buttery custard, causing the bike to seize up and throw you into the sand.

But that’s really up there with the camel you say you saw. It’s possible but highly unlikely. Almost like the Yellow Puta’s 10th world title, but not quite. Especially after he came third last night.

What’s highly likely is that you closed your eyes again (did you blink and forget to un-blink?), lost control of the bike, and force-fed Qatari gravel into places gravel was never meant to go.

What’s also highly likely is the rat-plagued sewer my wretched life has become since I became your minder here at Ducati, will have more and bigger rats injected into my suffering.

Fucken Claudio was here this weekend. You remember Fucken Claudio? He’s the one you say looks like a starving bug-eyed tree-lizard.

Fucken Claudio said to me: “Gigi, make sure you give that pouting Spagnolo shit-monkey the exact same bike as Blessed Dovi has. I do not want to hear accusations of favouritism, or that there’s an Italian conspiracy at the end of the season when he leaves to race against Trioba Liss in Austria.”

So I did that. I actually gave you Dovi’s bike. I just changed the race numbers and fitted that stupid adjustable-4000-ways seat you made us create.

Dovi then goes on to win the race on your bike. He doesn’t care what he rides. He’ll ride Morbidelli if he has to.

You go on to see big yellow camels and plough gravel with your face.

It’s just lucky Ducati has no actual money and this whole George exercise (or “der große George Meisterwerk der Scheiße„ as they call it) is funded by Matthias and his Germans.

And Matthias hasn’t spoken to me since Christmas when he sent me a roll of barbed wire as a present, which is some cause for concern.

Everybody beat you today. No-one else crashed. Not even the racers who always crash. Not even Mad Yak, or the Human Cartwheel Called Iannone. Not even that terrible English gangster Redding who has been in all the teams and crashes more than the Australian Internet. Sure, Rins crashed, but he planned to do that. So it’s not really a crash.

You’ve ridden all the Ducatis there are to ride. There are no more Ducatis left for you to ride. I’m thinking of re-badging the wrecked KTMs and seeing how you go on them.

If that works, I might be able to sell you to those crazy teenage Austrians. They’re so full of Red Bull and imperial nostalgia they can’t see straight, but they have more money than the Germans, which they’re going to need if they plan on buying Zarco next year.

I’m not sure they will buy you as is. You may have to change your appearance. Which may be the reason Matthias sent me that barbed wire.

So while I may be running out of ideas, I do still have options.

This is going to be a long season, George. I can feel it in my waters.

From my suffering wet places where the plague-rats live,