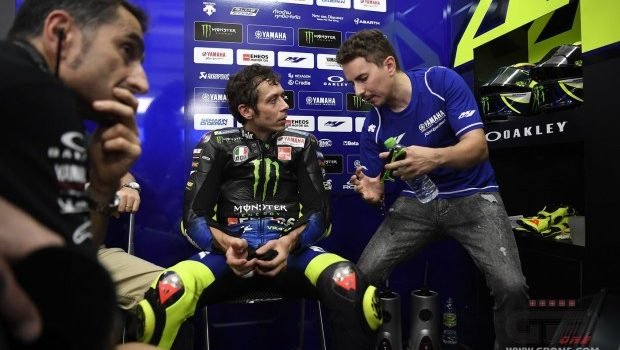 “And everywhere he is put this black flag with the picture of his broken culo on it.”

You have come back, si? Allora, I think, yes. Everywhere I look, you are there.

Or maybe you just did not leave the Sepang from last year, ha ha! Have you been retiring under the palm trees with the spider and the cobra?

And you say you are the new Boss of the Yamahas. Is that why Lin is cut himself with the screwdriver so much? You also say you are the Testiculo Grandioso and some other Spanish words I do not understand.

I do not know what is happening. So I ask the Uccio.

“Uccio,” I say. “Why is the George come to me in the pit and make the shapes and fists with his hands? He also make the noises like the bike, si? ‘BRRAAAAGGGGHHHAAAAAA!’ And then he make the big mouth and yell: ‘SSSSSS-CHAAAAAH!’ at everyone.”

Uccio does not know. He thinks maybe George has taken many nightclub drogas and will put the underpants on his head soon, like Iannone.

Allora, Uccio then say to me that George wants to make the testiculo of everything, the prosciutto, the olives, and the soft tissues we send to Dovi. He say to me George then puts his testiculos in the sink where they wash the bike parts, and rubs them on the tyres. That is when Lin makes the deep cuttings on his arms.

And everywhere he is put this black flag with the picture of his broken culo on it.

Allora, I think, very good. Is like when we were team-mates, si? Except now he is not make the mouth-foam with anger and hatred for me.

But of course is best when George goes to the other teams and makes the testiculo on their race-suits and helmets. I think Cal will hit him in the face with a big spanner soon.

Dovi just runs away and makes the crying. Marquez does not know who he is. His brother, Alex, think George is Dani’s alcoholic father. The Espargaro brothers think he is some kind of prostitute – a cheap one because their teams do have much money. Petrucci cannot open his eyes because his face is so fat, so he cannot see him, and Jack wants to drink beer with him. But Jack will drink beer with a fence, so is not special, si?

I think it is very funny.

So, OK then, George. Make sure you are close to me when the bad feeling come next time. I think maybe in Qatar it will come. Make sure you have done much testiculo by then, si?