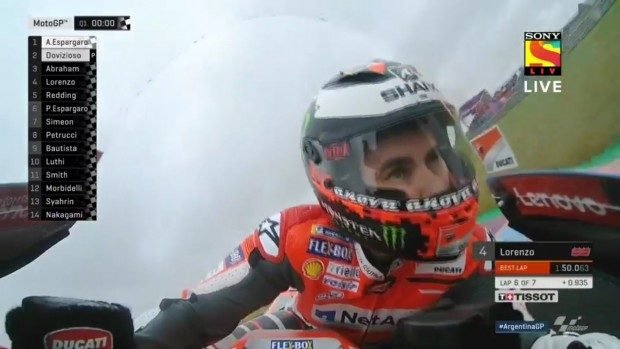 “We pay Jack in beer, George. He is Australian, so he doesn’t understand money. We offered him Euros but he said he doesn’t need ‘that fucken poofter money to race bikes’.”

My sister Antonia is married to a Serb. His name is Dragan. The family is terrified of him because when he drinks rakija he likes to sing 500-year-old death ballads about killing Italians in a beautiful baritone voice as tears fall from his eyes.

He also likes to share the wisdom of his people with me. Much of that wisdom consists of axioms, maxims and pithy old village proverbs which are unique to the Serbs.

He called me straight after you successfully failed to make it into QP2 and pushed one of those ancient wisdoms straight down my throat.

And then he laughed some more and went off to do abominable things to my sister. And she is not a porcupine.

You know how I told you my life has been a rat-plagued sewer since you joined Ducati? It seems I was wrong. I now dream of my life being a rat-plagued sewer. I dream this because then my life would be better than the shit-bedecked cannibal toilet-hole of a porcupine fuck-fest it currently is.

Free Practice One – Ninth. Lots of sighing in the pits, but nothing new. I think one of the techs is using heroin. I asked him to save me a hit.

Free Practice Two – Seventeenth. The Malaysian satay stick was ahead of you in sixteenth. Tits Fucking Rabbit on a 1978 Ducati Darmah was third and so far ahead of you he was in Brazil. I’m hoping the syringe is dirty.

Free Practice Three – We rejoiced at your improvement from seventeenth to sixteenth. You should have seen us rejoicing. Such rejoicing.

Qualifying Practice One – Still fourth, huh? Except now it counts. Fourth in QP1 means fourteenth on the grid. Behind Karel. Behind Rabbit. Your four-tenths of a porcupine-fucking second ahead of Morbifuckendelli, George!

You’re also not on pole. You know who is on pole? Jack Miller. And Jack is on pole because he rode around a partially wet racetrack on slicks, while sitting on fizzing testicoli the size of planets and the colour of courage.

We pay Jack in beer, George. He is Australian, so he doesn’t understand money. We offered him Euros but he said he doesn’t need “that fucken poofter money to race bikes”.

We give him old shitty bike parts, we make him shower in cold water, and we use electric shock therapy and sleep deprivation to motivate him. He comes from a country founded by criminals and run by fascists so he thinks he’s getting a good deal.

So he tries very hard, George. All the time.

Just like I do. Even when I am balls-deep in a grunting Serbian porcupine.

Is the race over yet?