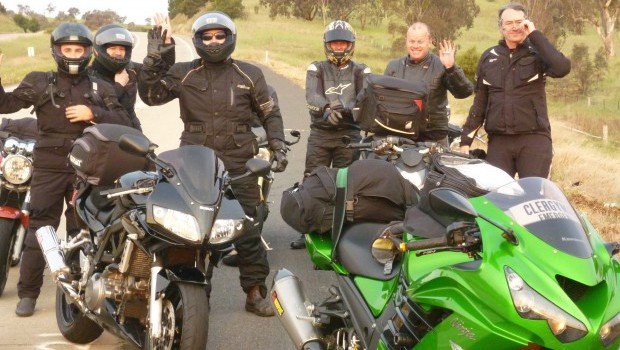 Let me raise your awareness for a second. Let me demonstrate how awareness should be raised, and then we can all go about our business with grace and dignity, fully cognisant of life’s many ironies.

Recently, there was a thing called “Motorcycle Awareness Week” (MAW). You were probably unaware of it. And you cannot be blamed for that. The people running it are not very good at marketing.

But you’re aware of it now. Because I am an order of magnitude better at marketing than they are.

I can and will expound at length about the NSWMCC another time, and in painful, surgical detail (because it will make their porridge-filled heads explode), but in this column I would like to deal with its MAW.

Is there a rider out there somewhere who is somehow not aware of the fact that riding motorcycles is dangerous? No? I didn’t think so. Now then, were you made more aware of motorcycling’s inherent risk by MAW?

Once again, the answer is no. You knew it was dangerous from the get-go, or, I submit, you wouldn’t be doing it. After all, it’s only as fun as it is because it’s dangerous.

Now then, car drivers were also targeted by MAW, so that their awareness could be raised about the fact that there are motorcycles on the road.

Well, hell yes! It’s entirely possible, though highly unlikely, that there are car drivers out there who will not know that motorcycles are on the road. But I’m pretty sure that 99.99 per cent of them are aware of that fact. That they don’t give a shit is another matter, but they do know we’re there.

So does MAW raise the awareness of the car drivers who aren’t aware of motorcycles being on the road?

No. How could it do that?

But if someone from the NSWMCC could provide some data that would prove MAW does what it sets out to do, I would be grateful.

And thus would I be made aware that I am wrong.

See how this works, muppets?

But I am not wrong.

Now MAW is also targeted at raising the awareness of “others”. And this may well be where MAW’s great successes lie. I don’t know. I don’t know because I do not know who those “others” are. They could well be dancing bears. Or glassy-eyed streetwalkers. Or traveling gypsies. All of whom are now aware of motorcyclists being on the road thanks to MAW. Apparently.

We should all exhale with relief at this achievement.

Let us now move to the “how” of this “raising awareness” shit.

The NSWMCC states: “A wide range of events is planned, running from 10 October to 7 November”, and that one could find these events on the EVENTS page of its website. So I looked. There was nothing there that corresponded to those dates.

What’s the go there, you chancing twatters? Did someone forget to put the events up? Damn poor form from the entirely self-proclaimed “peak body for motorcycling” in NSW.

Then it dawned on me. Perhaps no MAW events were necessary to raise awareness. Perhaps simply by creating MAW, awareness was raised. Job done. Good work and merit badges all ’round.

Yeah. That must be it.

I must now pause to swallow the vomit that has worked its way into my mouth.

Is there a more abysmally stupid and intellectually offensive word pairing on earth than “raising awareness”?

Somehow, we as motorcyclists, still permit these volunteer-based covens of self-aggrandisement to freely engage in this type of pointless circle-jerking. To pretend to do something, while actually doing nothing is surely worthy of nothing but contempt.

Raising awareness has become the highest form of social activism, precisely because it is so utterly pointless and self-defeating and requires absolutely nothing from those who purport to raise whatever awareness they feel needs raising.

It is bullshit. Those who engage in it are bullshit artists.

Raising awareness insults the intelligence of every person on this planet because it presumes we are all stupid. Fools who are unaware of some drum that needs beating, and that by making us aware of the drum, the drum somehow gets beaten.

Raising awareness is crock of steaming shit so noxious it makes a sewerage treatment plant smell like French perfume.

Nothing ever comes of raising awareness. Not a single damn thing. Because raising awareness is the best way we know of not actually doing anything concrete about anything. It is a diseased mewling animal that needs to be put down with a bullet to its intelligence-insulting skull. And then it needs to be kicked and kicked and kicked until you’ve sprained your foot and need to sit down and take the weight off it for a bit.

Get in the sea.