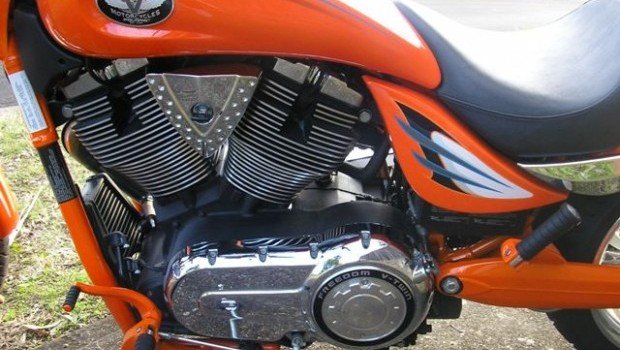 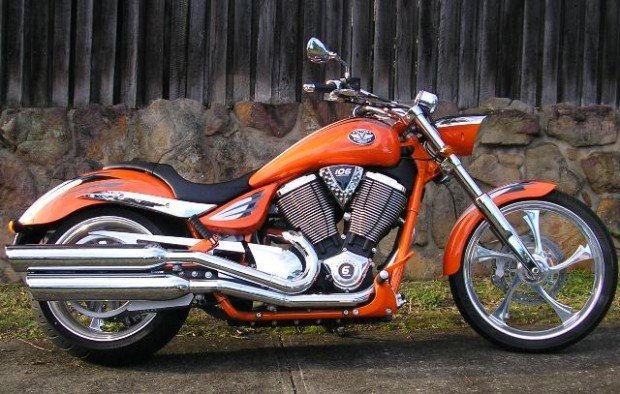 LOOKING more like a one-off custom chopper than a production street bike, the Vegas Jackpot is a serious and immensely able contender in the huge big-cruiser market. 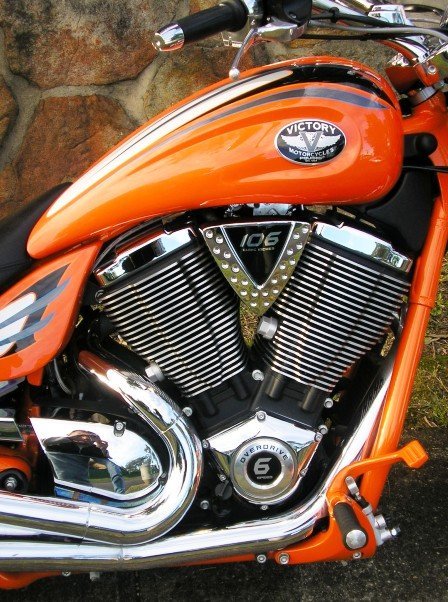 The V-twin – responsive, willing and powerful

How serious and able?

And that, friends and relatives, is what this segment of the motorcycle market is really all about. 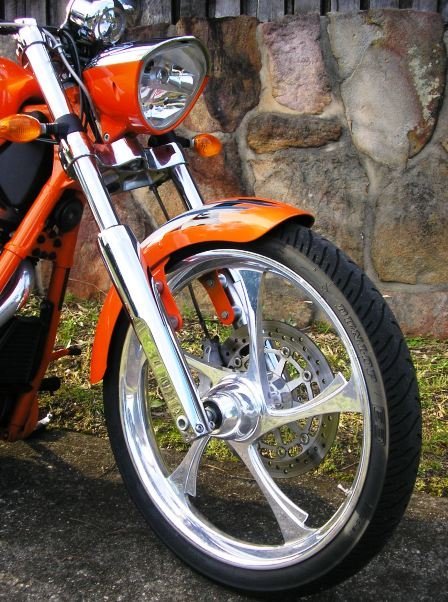 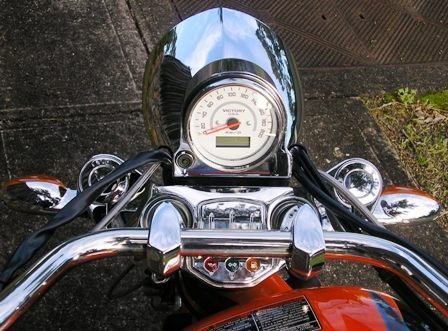 You need to know your speed, if your blinker is on and if you’re running out of petrol. Everything else is none of your business …

If you don’t know, Victory motorcycles just celebrated its 10th anniversary. The parent company is Polaris, which has a wealth of experience in building ATVs, snowmobiles and a heap of interesting-looking vehicles for the US military. So it’s not as if Bubba and his mates decided they were gonna have a crack at the motorcycle market and got their spanners and chewin’ baccy out one afternoon in Appalachia.

This lot is playing first grade.

Victory looks set to become a serious player in the cruiser market and offers a range of motorcycles that are impossible to dismiss as wannabe Harleys. They’re not, and the involvement of customising legend Arlen Ness and his son Corey (also a dab hand at building killer choppers) is testament to the company’s commitment to building a top-notch product.

But commitment is one thing. The ability to deliver such a product is another. So it was with a great deal of interest (and some apprehension) that I threw my leg over the orange crush version of the Vegas Jackpot.

Matho had told me it would give a Suzuki Boulevard a run for its money, but I was sceptical. After all, the Boulevarde was my benchmark for hard-charging cruisers. Ten minutes later, I was reconsidering that benchmark. The Jackpot’s 50-degree, 106-cubic-inch engine is a thundering, booming colossus of grunt and urge, with 73kW of power and 153Nm of torque propelling you forward faster than you can imagine 294kg of 1.7metre-long motorcycle ever going.

That Harley should look to its guns is obvious. That Suzuki should have a look at its firearm is also now apparent. The Jackpot’s motor is truly a torque-ogre. Not only does it look like brutality made flesh, it can actually back it bad-arse bullshit up when you decide it’s time to declare war on arbitrary speed limits.

Most satisfyingly, its fuel injection is well-sorted and perfect for smooth low-speed cruising, but also really delivers when you crack open the throttle. Yes, you will probably make a little sex wee.

You’ll be wanting to replace the pipes seconds after you buy the bike. There is a brilliant thundering cacophony within that motor just demanding to be unleashed via hacksaw, hammer or aftermarket systems, but if you’re the aurally sensitive type who likes walking along windswept beaches with your simpering boyfriend tucked under your arm, the muffled rumble of the stock pipes is passable.

The gearbox was another surprise. It was actually less clunky than I expected and less clunky than most of its competition, which was certainly unexpected. It’s a six-speed box, with sixth being a true, but still useable-to-overtake overdrive. Neutral is easy to find and the hydraulic clutch is probably heavier than it needs to be, but I didn’t find it a problem. And given I spent about a month commuting up and down Victoria Road (Australia’s busiest) on it, I figured that if there was one, it would show itself. 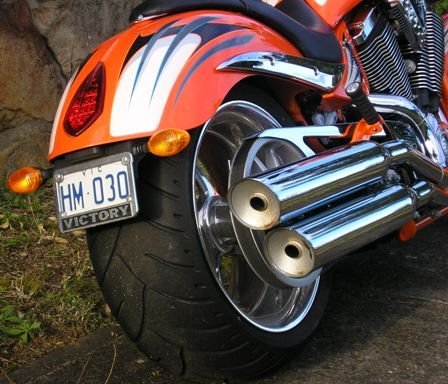 You’ll be wanting to throw these away seconds after you buy the bike… but the muffled rumble of the stock pipes is passable.

The clutch, the gearbox and the engine remained totally unperturbed by the heavy traffic and slow going. It’s belt-driven, which seems to have become de rigeur for American V-twins, and since this technology has proven to be quite successful for this type of bike, I’m really good with it.

Pillion comfort is cruel and minimal. You, as the rider, will be fine, but this is not the type of bike old blokes and their couch-arsed wives will be touring on. Only firm-bottomed young hotties need apply, and judging from what was going on each time I parked the Jackpot anywhere, there will be no shortage of applicants. 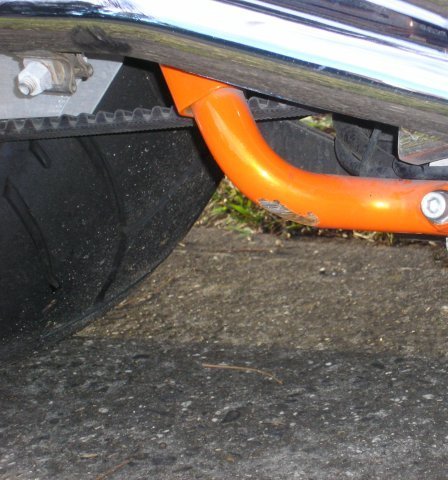 The ground clearance is fine, unless you get too excited.

There are 43mm forks up front and a single preload-adjustable shock tucked underneath at the back. The combo works well enough unless you decide to push the bike past its design parameters, whereupon it all gets a little unsettled. The ground clearance is fine, but you’ll be grinding the frame away on left-handers if you get too excited.

The association between the big fat 16-inch hoop on the back and the 21-inch skinny on the front is an eye-opener if you’ve never ridden such a thing before. But once you’ve reconciled yourself with the fact that you actively need to lean it into a corner and keep it keeled over by main force, rather than just willpower, you’ll be fine.

Instrumentation is wonderfully minimal. You need to know your speed, if your blinker is on and if you’re running out of petrol. Everything else is none of your business and quite frankly surplus to your riding needs. Oh, there is an engine warning light in case something is about to explode. But that will, in all likelihood, never go on.

The level of overall finish is very high. The paint is stunning, the alloy is plentiful and obviously intended for blokes who love to keep their bikes looking schmick, ‘cos there’s lots of it to polish.

I have hugely enjoyed my time with my first Victory and I look forward to sampling other models from their range. I think it’s great that someone has taken a more extravagant approach to building bikes that positively scream out for just that kind of treatment.

At a touch over thirty gorillas ride away (check prices with your local dealer at www.victorymotorcycles.com.au as they may vary slightly from state to state), it’s twenty grand cheaper than Harley’s flagship CVO range, about a hundred grand cheaper than a custom-built chopper, and about twelve grand more expensive than a Boulevarde. Which kinda makes the Vegas Jackpot both exclusive and a very real bargain. 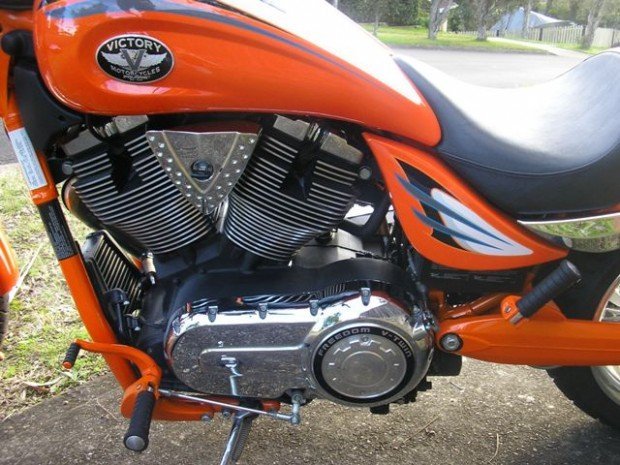 The V-twin. And you thought Freedom only made fries 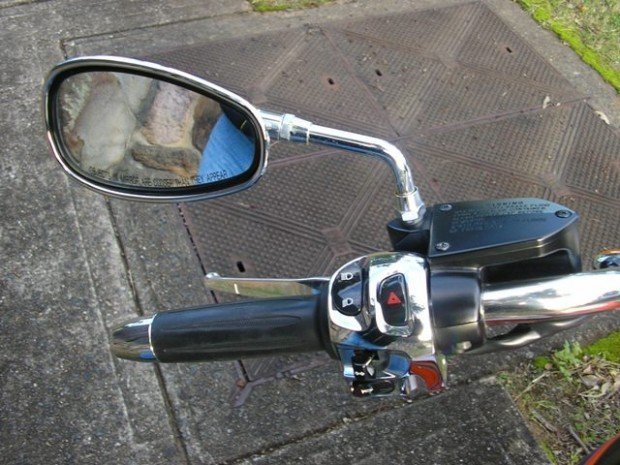