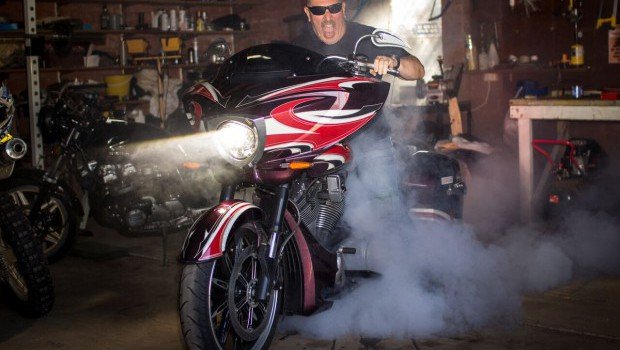 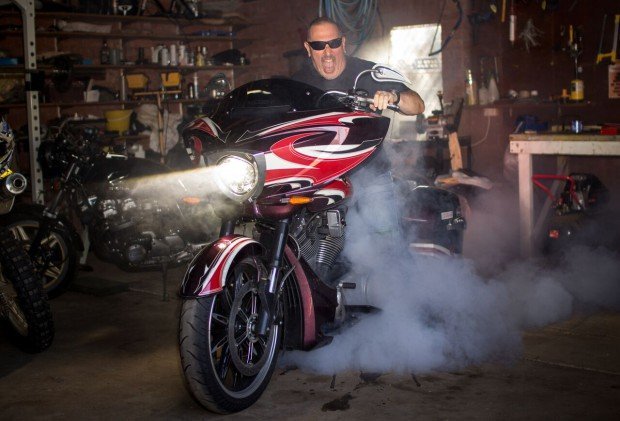 Just warming the rear bag in Boon’s garage because his neighbours deserve it.

Do you know what it’s like to walk into a bike shop and say to the manager: “Greetings, you fabulous champion. I would like to trick this bike up and you are to spare no expense!”?

But I’m starting to work it out with the help of Chris Pappas, the service and parts manager at Victory Motorcycles in Ashfield.

Between us, we have managed to convince Victory HQ that our mission is a holy one. To wit: make the Arlen Ness Magnum a proper head-turning jaw-dropper that churns out 120-horses at the rear wheel.

This, as you can imagine, was not quick or easy to do. But we did it. After all, grown men can only ignore the tears and screaming of other grown men for so long before they agree to whatever the hell the teary screaming men want.

So this is the plan:

First we do the horsepower upgrade, just so you can all see how quick and easy that is to do. We’re gonna take the stoker to the drags and run a time and then we’ll take it back to the drags after it’s been hyped and run it again.

Then, when we have the ‘go’ sorted, we shall proceed to make the Magnum something very special to look at.

Once that is done, we shall rest.

Oh, if you’re following the build, it started HERE.