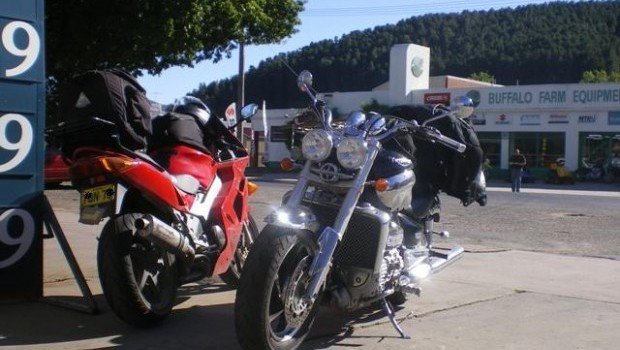 TRAVELS WITH THE DOOR III 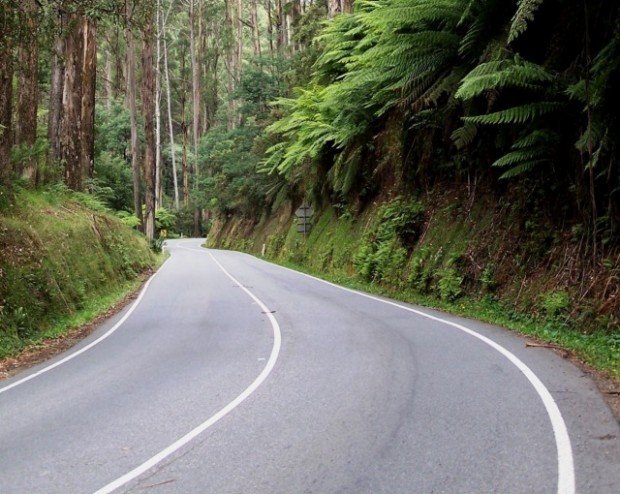 North of Healesville is the Black Spur. It’s a forest of long straight trees, with the ground covered in tree ferns, my second favourite plant. It’s like any of my favourite motorcycle roads near home, except that it’s got an excellent surface. The forest changes the light and gives a surreal feel.

I recall Boris saying it’s worth doing slow. We wouldn’t know about that. Some strange electronic sign flashes at us to slow down. The Door stops. “Was that a speed camera?”, he shouts at me. “If it was, it’s pointing at our noses”, I yell back.

The Door pops a celebratory wheelie as he takes off.

The road straightens a little. There is a pub. It has a stuffed horse tied up outside, in memory of a deceased drinker according to the plaque. There is a motorcycle on the roof. We stop and take a photo. 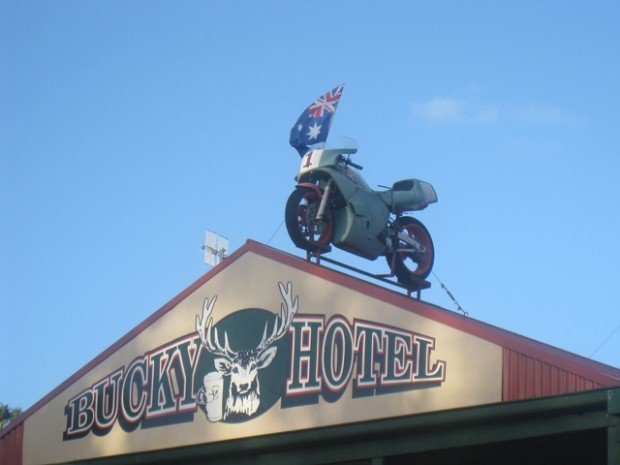 We keep heading north. I’ve calculated it as a four hour ride from the track. Almost all of it is on some of the best roads I have ridden.

We arrive in Mansfield at the Hotel Delatite around 20:00. A young bloke called Mark tells us we can still get a steak. We drop our bags in our rooms and come down to the restaurant. The girls serving in the bistro are charming. We order steaks. Mark gives us beer, recommending the Cascade over the Asahi, which he says is not as good since they started brewing it in the Philippines. 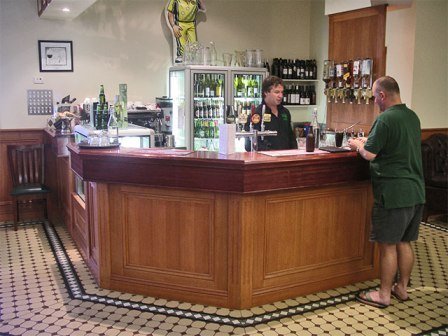 The bistro bar at the Hotel Delatite: The Door and Al were unable to drink it dry

The Door wants a bottle of red with his steak. He insists I choose it. Mark lets us taste a local pinot noir. I decide on a local shiraz instead. The Door is impressed with the Samaria shiraz. It is young but full flavoured and full of varietal character. The Door vows to get some for his collection.

We call our families. The food arrives. I’ve got a porterhouse steak. The Door has some vertically imposing surf’n’turf affair, with four prawns that must weigh a hundred grams each holding up four hundred grams of sirloin. The Door is ecstatic.

“Fantastic, Al”, he says. “What a great pub! Where did you find out about it?” 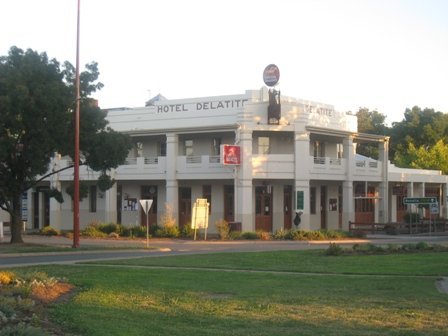 The Hotel Delatite in the cold light of day

“On the Internet”, I reply. “There are four pubs in Mansfield. I picked the one with ‘tit’ in its name.”

We finish our meals and the shiraz, and wash them down with a palate cleansing ale. I ask if there is any cognac. There isn’t, but Mark rustles up a Napoleon VSOP.

Around 2300 Mark closes the bar. He tells us there are some very noisy people upstairs and asks if we want rooms on the other side of the hotel. We can hear muffled shouting and swearing. We tell him we will be okay. He invites us to take the double brandies up to our rooms. We sit on the upstairs balcony with our drinks. The shouting and swearing is louder.

We are joined by four crazy men from Tasmania. They are very drunk. Their eyes are bloodshot, they can hardly walk, and they cannot speak without shouting. They cannot construct a sentence without “fuck”, “fucking” or “fucked” in it. They tell us they are in Victoria for a mountain bike race. One has crashed and shows his wounded arms and legs. Another has rolled the truck they were in, and they don’t know how they will get home.

One of them insists on showing us the video of his crash. He disappears and comes back with a video camera, but he is too drunk to use it. They want to buy us a drink, but the bar is closed. One of them comes out with a joint the size of a Cohiba. They pass it around but keep losing it and enquiring loudly as to where the fuck the fucking joint is.

The Door and I retire around midnight. The Tasmanian tumult subsides to a dull roar. I sleep surprisingly well.

We roll out of Mansfield at 0700. The Door pops a celebratory wheelie as he takes off.

It’s a cracker of a road to Whitfield – the corners seem endless. We turn off through the northern Victorian wine country to Myrtleford for breakfast. The Door likes his wine, and says if we could hang around and drink for a few hours, he knows some fabulous places for lunch. I talk him out of it. We press on. It’s early, we’re travelling east, the sun is in our eyes, we’re pretty slow. 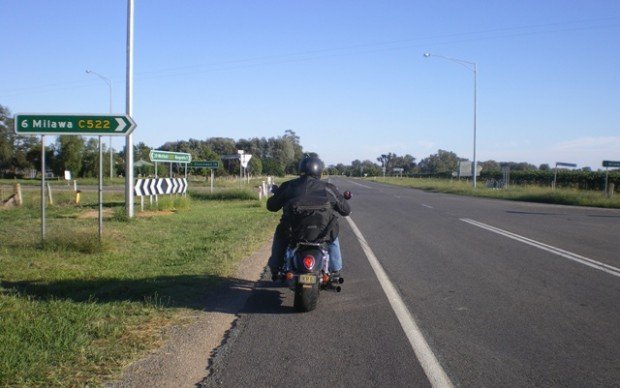 An old fellow gets out of a small truck while an older driver refuels it at Myrtleford. He walks around The Door’s bike. Slowly. Thrice.

Max is a bit deaf. 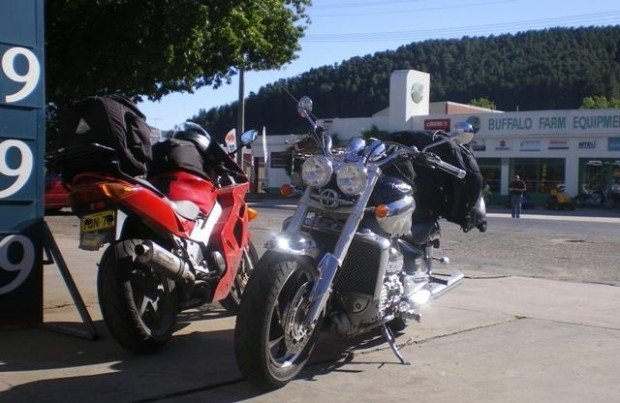 Gassed up at Myrtleford, and The Door returns from inspecting equipment for his proposed buffalo farm

We hit the Murray Valley Highway just south of Wodonga. It’s another great road. It meanders along beside the Murray River in a long series of S bends. Straight sections are short, and you always seem to have a good long view in front of you – I estimated 2000 metres at one point. I suspect mobile radar would not work well on that road. 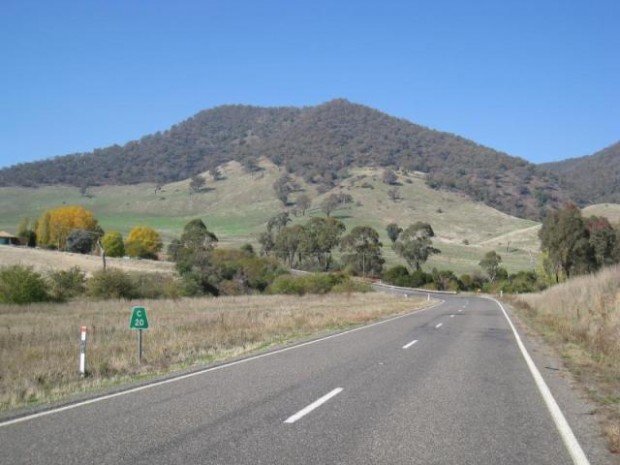 The Murray Valley Highway before Corryong – a rare straight 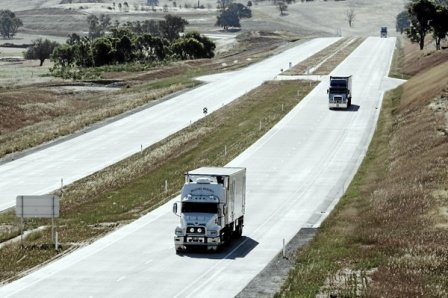 The Hume Highway. Not the favourite part of the trip.

Gas stop Corryong, cross the border at Towong on an old wooden bridge. The Door leads us up the back way to Tooma, Tumbarumba, Batlow: newly resurfaced winding mountain roads. We stop at Batlow for lunch. There is a sign on the pub wall that says “Counter Lunches”. We enter with a thirst you could paint a picture of.

We go to the cafe around the corner and have a burger. It is a good burger. The beetroot is especially tasty.

We head north. We’ve been on fun motorcycling roads since 1700 yesterday. It has to stop soon. The roads start to straighten out as we leave the mountains behind us. We hit the Hume Highway at Tumblong. It’s going to be straight all the way to Sydney.

We fuel up at Yass. The Door decides to use the wood duck method. He waits in the slow lane at 100-110. A duck passes at 140. The Door sits 250m behind him watching his mirrors and watching for U-turn bays on the motorway between the duck and him. I sit 20m behind The Door.

We pass a Gixxer thou and a GPz 1100. They work out what we’re doing and slot in behind me. I watch clock and odometer. ETA Sydney is shrinking slowly.

It starts to rain at Goulburn. My helmet, gloves and boots get damp. The fairing on the Viffer protects me well. The Door is soaked.

The duck is a good duck. He gets us to around Picton. We back off. The last 100km is slow and wet. The Door turns off 40km before I do.