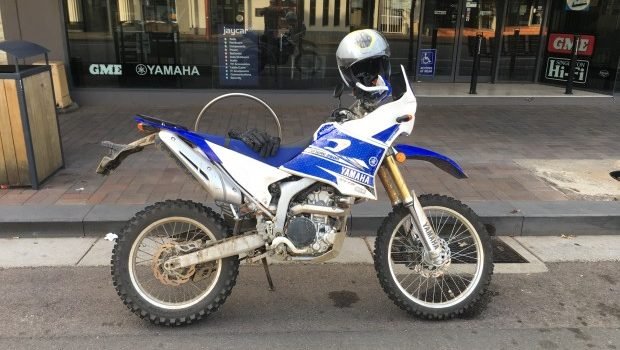 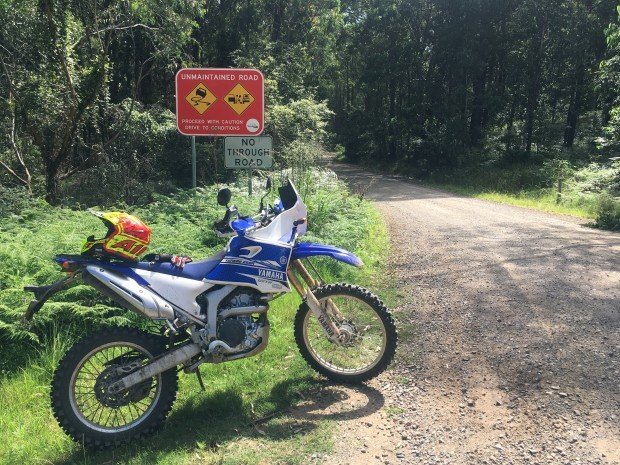 Giving me a dirt bike is like giving a gibbon an AK-47. It’s hilarious. Lots of noise. Screaming. Stuff exploding. Massive hilarity for a while, and then lots of tears, regrets, and recriminations.

That’s me and a dirt-bike.

In this case, a slightly modified 2020 Yamaha WR250R, which is as real a dirt bike as dirt bikes get – all spiky knobbies, challenging seat-height, and grim cruelty.

I stared at it for a long time as it sat in my garage.

“What am I supposed to do with this?” I asked myself, over and over. “Readers will expect a proper review. And A proper review will entail me launching it into the sky, smashing it off a berm, and dank wheelies over fallen trees.” 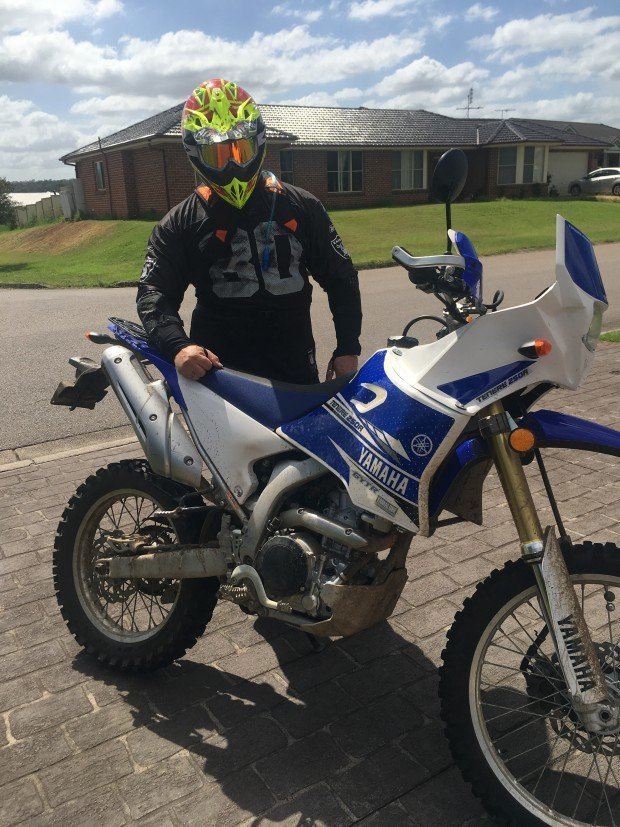 My wife took a farewell image of me to hand to the rescue crews that afternoon.

Now I can certainly send the WR into the sky. I can send any bike into the sky. I cannot guarantee the landing. Likewise with the hot-berm action and the wheelies over logs stuff. All of this can be initiated. None of it can be completed with anything resembling grace.

I’ve ridden a bit of dirt. Sometimes a lot of it in one hit. Some of it has been very challenging, even for skilled dirt-riders. I’m not great at it. I’m not even very good at it. Sure, I get it and I know the mechanics of what I have to do when various scenarios present themselves, but there are two problems. 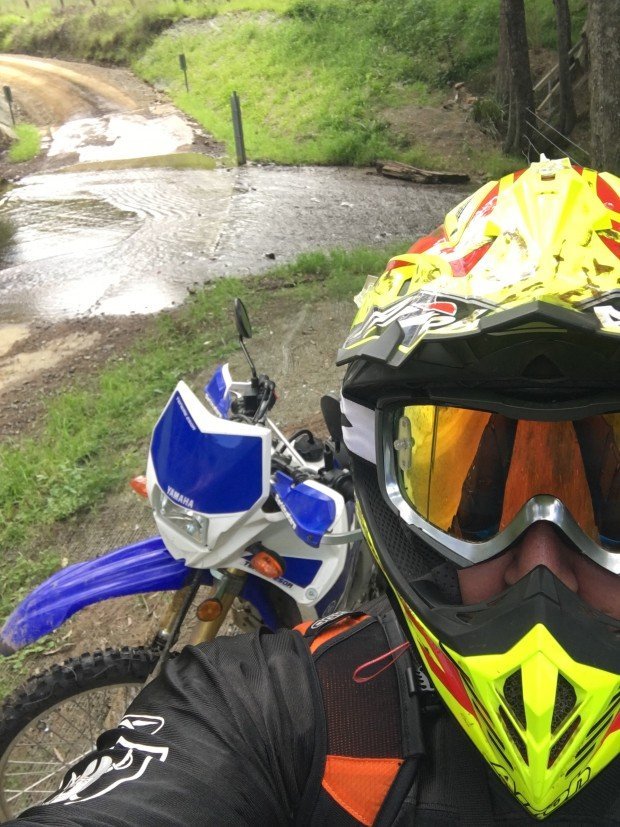 It wasn’t that deep.

Problem The First. I do not ride dirt often enough to hone any of these skills, and it takes a while (several hours) before enduro-style riding becomes a reflexive thing for me.

Problem The Second. I’m a year shy of 60, and I’m carrying significant injuries which prevent me from moving like the hunting leopard I once was. 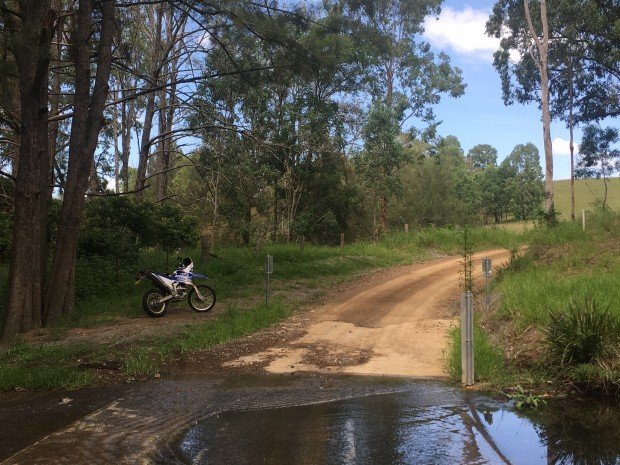 We’ve had a bit of rain up here.

And since high-action dirt bike banging is a huge physical and skills challenge, none of that sexy stuff was going to happen on my watch.

We are also in the grip of a pandemic, and asking my usual snapper, Nick Edards, to come out of self-isolation to photograph me being shit on dirt was not an option.

Simple. Do it yourself, Borrie. Put on your barely-used dirt-riding gear, then go and not-die somewhere not-so-horrible.

So last week, I caparisoned myself in armour, boots, and the best dirt-helmet on earth, and set forth to explore Mt Royal National Park and its environs. 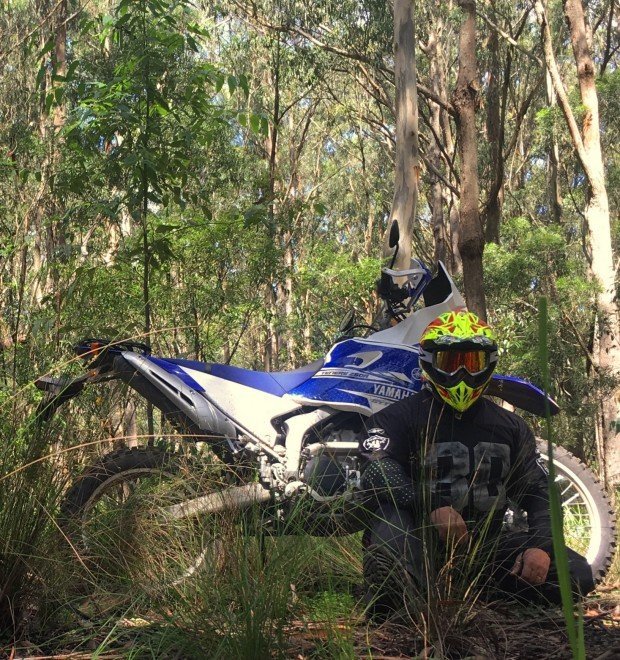 It took me five minutes to stand upright again.

Yes, this is a cardinal sin. No-one should go dirt-riding alone for obvious reasons.

I went anyway. And if you’d wanted to find someone more motivated than me to not crash on that day, you would have failed.

I was greatly comforted by the WR being my ride. 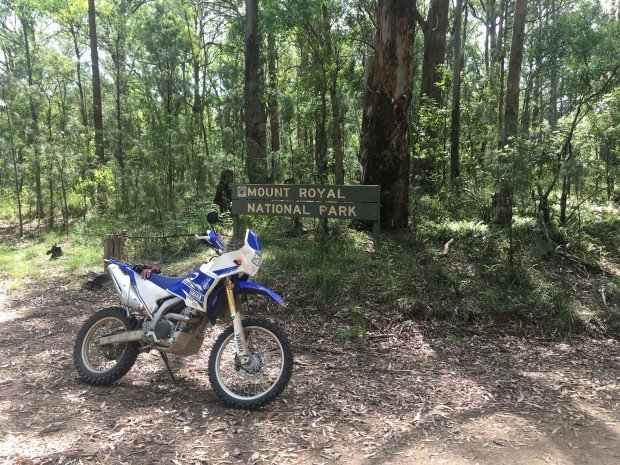 I quite like the way the aftermarket fairing jazzes it up.

It is a by-word for reliability and ruggedness. And if you’re going to set off on your own – and you shouldn’t, but if you do, then get yourself something that’s hard to kill, starts every time, and will get you home even if your spleen is leaking.

The WR250 is that something.

Greg Yager, who runs an adventure-ride company called RideADV, cannot praise them enough, and he’s got 20 of them. I read his opinion with great interest.
“These bikes are unbelievably reliable. We have clocked up more than 350,000kms on them and have never had an issue. All they require is regular servicing – we don’t even need to shim the valves.”

Good news, I thought. I haven’t shimmed a valve in thirty years.

“We have one bike with 57,000kms on the clock – mostly off-road including seven times across the unforgiving Simpson Desert. The only time we get the spanners out is for regular servicing. The valves have not required adjustment and we are still running the original spark plug…” 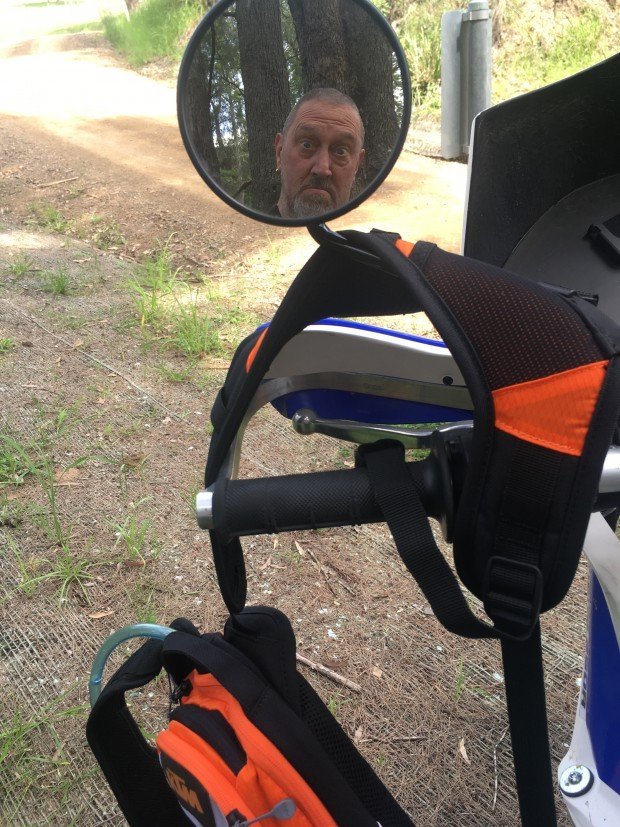 Mt Royal is not the Simpson Desert, I figured. I’ll be sweet.

“In 46 years of riding and working on dirt bikes I have never come across a model this reliable. The engine is bulletproof and will take unimaginable abuse. We just change oil, filters and tyres, and our bikes keep on delivering. They are the best adventure bikes out there, and certainly the bike of choice for a trouble-free round-the-world adventure.”

I need to be convinced the bike I’m on is going to get me home pretty much no matter what I do with it or to it. Beating it with a length of tree and weeping because it won’t start 60km from the nearest phone reception is what I see in my mind’s eye each time someone says “Dirt bike ride!” to me.

I’ve seen pictures and read reviews by dirt gods which tell me the WR can do all the hard enduro stuff with ease. 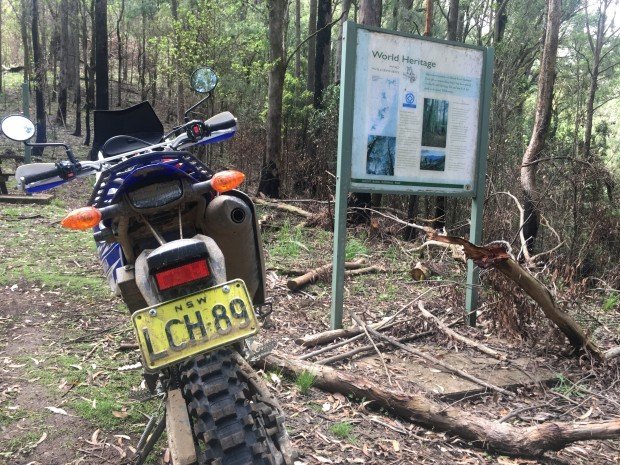 I was interested to know if it could do what I’d buy a bike like this to do – proper adventuring.

Let me explain in one easy sentence.

Picking up a fully loaded 1250cc adventure bike just after you’ve thrown yourself into a spoon drain at 60km/h sucks balls.

Picking up an 800cc adventure bike 224 times in one day sucks balls too.

Weight is a terrible thing when it is compounded by gravity or inertia. 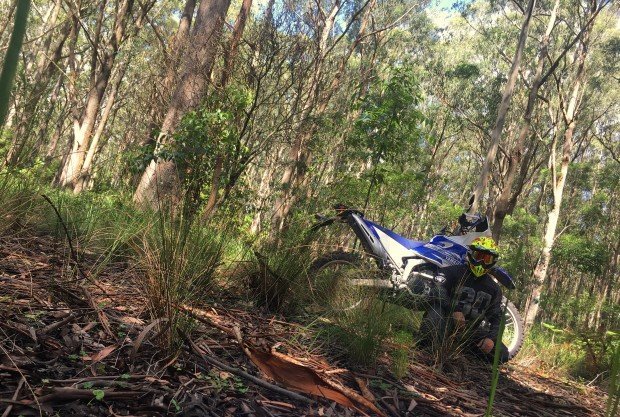 I will not hear a word about “True Horizons”. I was alone and in imminent danger every second. I had not time to be truing horizons.

So if you’re not great at dirt, or weightlifting, and you want a bike that can literally go to places those bigger bikes do not dare, or demand a skill-set you don’t have, then your choice is simple.

Certainly, if you are great on dirt, then you won’t find the WR250R wanting. And Yamaha has other WR250s – the WR250F and the WR250FX – and they are a deal hairier about the chest than the gentler R iteration. Why? Well, Yamaha sees the WR250R as a kind of lightweight uber-adventure tourer, primarily for the reasons I listed above – lightweight, ease of operation, and reliability. At no stage did I wish for more controls to tumble easily into my hands, or for the paint to gleam in the dying rays of the sun.

It’s a great entry-level bike if you want the Tenere 700, but figure it’s just too much right now. Get good on the WR250R and you’ll be a god on the bigger one.

Like I said, it’s basic, simple, and just the ticket if you really want to explore. 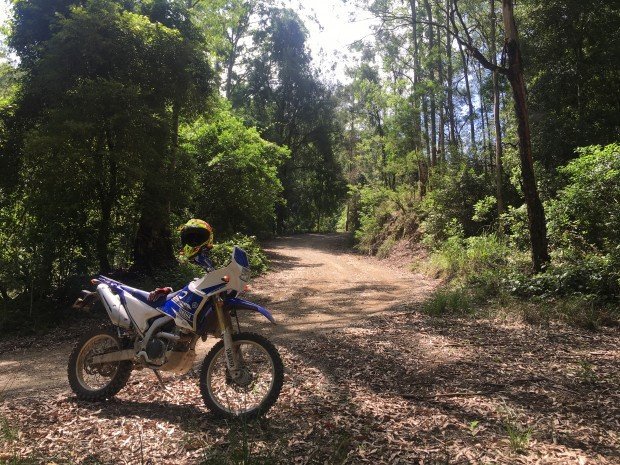 It’s upright. So I am winning.

I explored. I went all the way to the end of the main Mt Royal track. I saw a terrifying sight. A hefty middle-aged woman in a flesh-coloured bikini was unloading a case of Four-Ex from the back of a small 4WD in the camping area I rode past. She nodded at me, while her male partner quickly wrapped his nudity in a ragged towel.

The road itself was easy. Smooth and unruffled, like my progress. The vegetation is kinda unique in this World Heritage-listed park. This is one of the last strange temperate rainforests on the east coast.
So I went to the end where the gate is, and then went back up the range and took another fork. 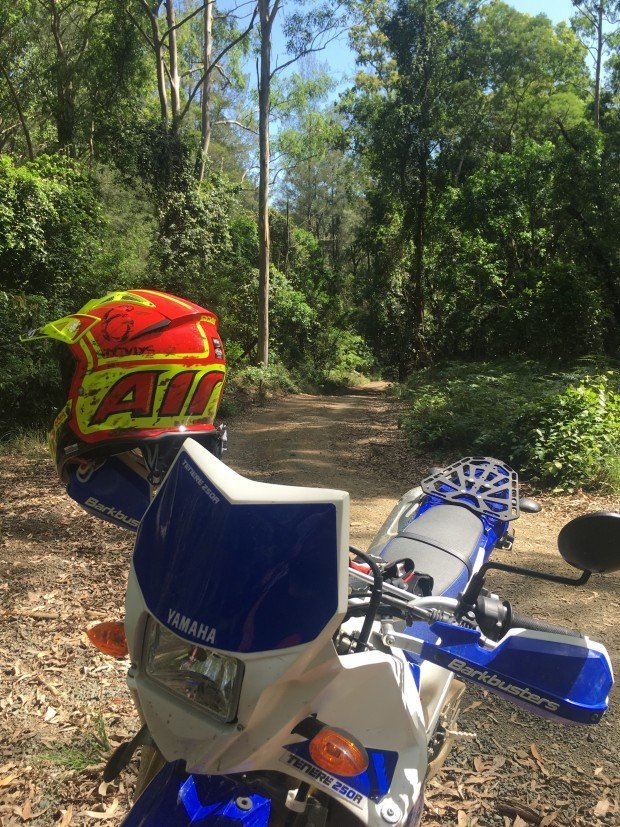 I could hear the bellow of jungle moose in the distance.

Cool, I thought. It’s bound to be a bit more of a challenge than the fire-trail.
And it was. It was steeper, scarred with run-off ditches, and boasting a vertiginous drop-off that thrilled me and terrified me in equal measure. And that’s what this kind or riding has to do – you must be cautious and you must be bold. And you must know when to be which. And if you’re on your own, then you must be on you’re A-game because the track can change without any warning.
I chugged along for maybe 15km, keeping an eye on my petrol via one of the two trip-metres.

The WR250R I was on had been modified a bit.
It boasted a 13.5litre Safari tank, a cool-looking fibreglass fairing, a GYTR bash plate, a Scaggs Moto Designs slim-rack, some Barkbusters, and a decal kit.

So it had a great range (I’m guessing about 180-200km), some crucial extra gear for serious work, and it looked very serious. I just hoped I looked every inch the intrepid adventure god I wished I was.

The suspension on the WR is really first rate – hell, it’s almost comforting in the way it absorbs bumps. The WR is tall, but not overwhelmingly so, and light (134kg wet), so its very easy to manoeuvre in tight situations. I tried to minimise those since I was alone. I did not fancy limping back to the bikini lady and her nude partner and asking for help.

I emerged from the forest primeval intact and very pleased with myself. Not only was I not dead, I was not even maimed. 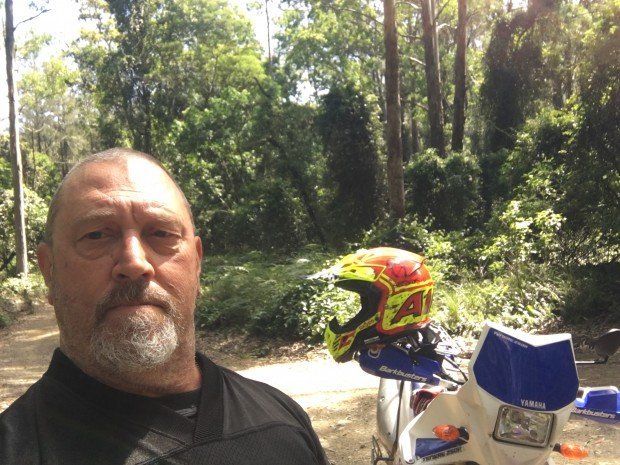 I rode back to town at a cruisy 100-110. The WR250R is not unhappy at those speeds on the tar, though it does need some down-changing when it encounters a hill.

I parked it in my garage and looked at it over a beer. 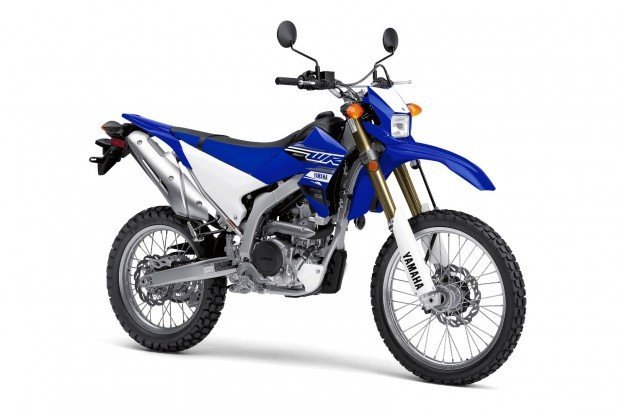 This is what the stock one looks like in case you were wondering.

I felt my general happiness could be increased a great deal with one of these in my shed.

For special occasions, you understand.
It costs a mere shoulder-shrugging $9499. Which to my mind is not a great dal of money for a bike that will take you places and show you things that will stay with you forever.

And then it will get you home as well.