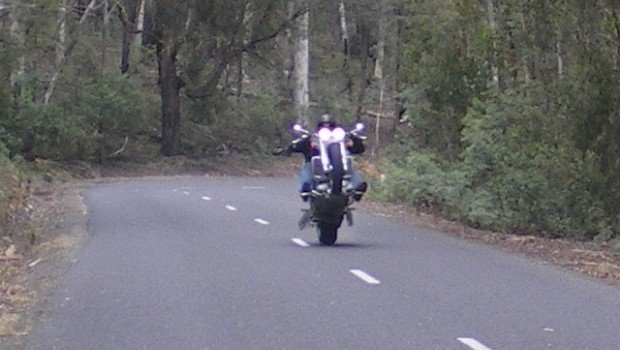 TRAVELS WITH THE DOOR I

I turn my phone off, mount the Viffer, hit the road.

I’ve slept badly. I’m still not fully awake. I’m staring at the road, and the speed camera sensors in the Lane Cove Tunnel spring into view. I glance at the speedo. That had to be 95 – 15 over. “Oh dear, I really must be more careful”, I say. Or a word to that effect, anyway.

There’s another speed camera 10km on. I go through at 15km/h under the limit. I am redeemed. We are square.

The Door and his Rocket III are waiting by the motorway as arranged. The Door extends a hand the size of a small country. “Al! How are you?”

“I’ll tell you at Pheasants Nest.”

Pheasants Nest is half an hour. We gas up. It’s still dark. I tell The Door which way we’re going.

I tell The Door there will be some dirt roads.

We leave Pheasants Nest. The Door pops a celebratory wheelie.

We turn off the Hume Highway after a boring 100km or so at South Marulan. We take the Jerrara Road. It’s not the best road, but it’s way better than the Doom.

It turns to dirt after a while. The Door drops back so as not to eat my dust. A rabbit runs across in front of me. Two wallabies break on to the road and run along in front. I just miss one. I’m glad they’re fast – the dirt is loose and I don’t want to brake hard. The sun comes up. 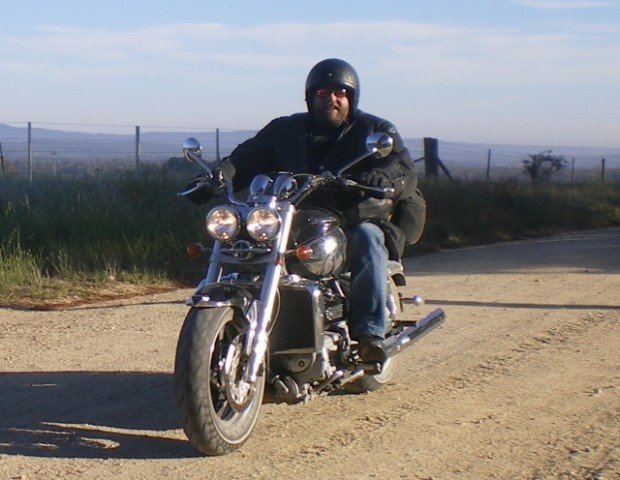 The Door motocrosses in the Heavy division

Another rabbit. Then another batch of ‘roos – three this time. One is huge. I see them in plenty of time.

I’m reasonably quick on a dirt road. The Door is not in my mirrors. I get to the turn on to the Kings Highway. I figure I’ll stop and take a photo of The Door as he approaches. I cut the ignition and start to take my gloves off. I become conscious of a Triumph Rocket III idling beside me. 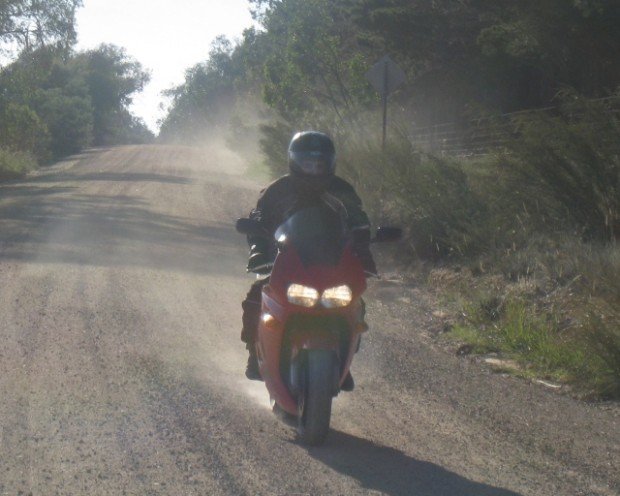 Back on tar, we stop 20km later at Braidwood for gas. I fill up and go to pay. The Door goes to wash the dust and bugs out of his beard. A truck driver in the service station is looking at The Door’s bike.

“It’s not really built for top speed”, I explain. “It’s probably about as fast as mine. 240 maybe. Allegedly.”

I’ve planned the route to cross the Great Dividing Range three times. The first crossing is now. The Kings Highway winds over the mountains from Braidwood to the coastal town of Batemans Bay. It’s a fabulous road. The surface is good, and it’s not too crowded. I ride behind The Door, and watch him grinding his Rocket into a V shape. The spark show is entertaining. He doesn’t change gear much. I have to go down two or three to match his drive out of the turns.

Batemans Bay, Narooma, Moruya, Bega. It’s a good ride. Cattle country, lush green hills, the Pacific Ocean on our left for much of the way.

We pass an old Triumph twin. A little later, we pass a pair of old Triumph twins. They keep appearing in front of us, singly or in clumps of two or three. Once there is half a dozen – old Tigers and Trophies and Bonnies, mainly sixties vintage as far as I can tell.

Four of them are turning off the Princes Highway on to the Snowy Mountains Highway as we pass the intersection.

Gas at Bega, head for Bombala via Candelo – the second crossing.

We encounter 50km of dirt which I don’t expect. I explain to The Door at one of our rare stops: “I use Google Maps. I chuck it into Terrain view and drag the route over any mountains I see.” Downside: it doesn’t tell you if the road is sealed.

I get to the end of the dirt. We’re 16km from Bombala. I stop on the tar and reach for my camera. The Door’s bike appears beside me.

The Door is copacetic so far. The weather is fabulous, and the roads we have ridden have kept his spirits high. We arrive at Bombala in time for lunch, and stop at the Globe Hotel, watering hole of BIKE ME! forum member Whitey. Last year the pub was being renovated, and it was a mess, but they served lunch. This year it’s the same, except for lunch. We head up to the other pub. The barman has seen The Door before, and interviews him at length to find out where. We order a steak, and he tells us he’s out of meat. We ask about burgers, which are apparently available as long as we don’t expect meat on them. I order fish and chips. The Door orders some bacon confection. 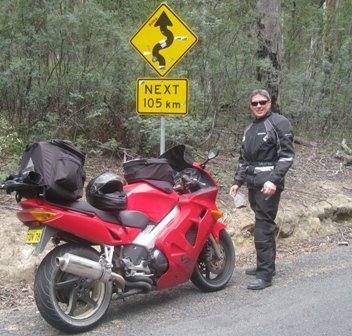 I explain that my friend Bly is nursing a broken leg, and I promised to drink a toast to absent friends and send him a photo of it. I get my phone camera out, take a picture with one hand while holding a beer in the other, and send it to Bly.

We drink a couple of beers and I tell The Door about the Bonang Road. He’s never ridden it. I tell him it is unforgiving, lightly signposted, and full of decreasing radius corners. The Door is still copacetic. I make him promise not to fall off his motorcycle.

We get gas and leave. The Door is sun-burned. He asks the lady at the service station if they sell sunblock. They don’t, but she goes and gets some of her own out of her car for him. The Door is impressed.

We ride the long sweepers at the start. They are so fast that The Door’s footpegs rarely scrape the road. We ride the first 7km of dirt. We stop at The Sign.

Then we mount up, and The Door hurls his Rocket III at the Bonang.

It is majestic and terrifying and alluring. I follow closely. The sound of metal grinding is louder than the Rocket’s exhaust at times. 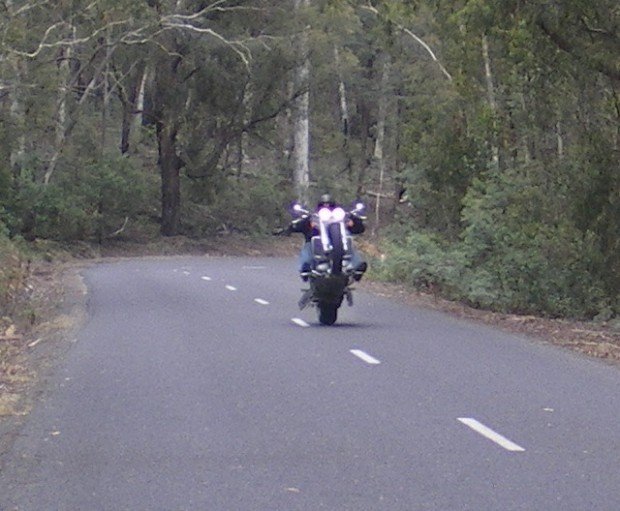 The Door hurls his Rocket III at the Bonang

We stop about half way. The Door says he needs to work on his bike. It seems that at one juncture the front wheel of the Rocket came down a bit hard, and in keeping it straight The Door has moved the handlebars in their clamps.

I have some good Allen keys, and I make them available. 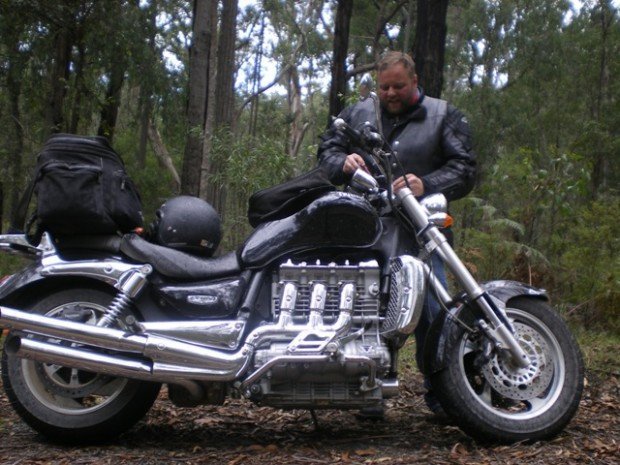 The Door repairs battle damage at the side of the Bonang

The Door is pleased with the Bonang. 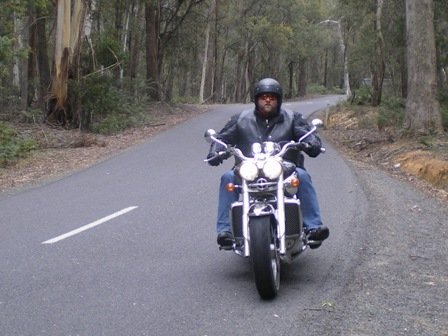 The Door on the Bonang

We ride further. The lead alternates. The Door is hard to pass, and hard to shake if you do. 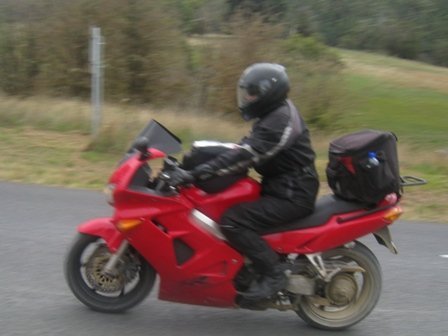 Al, one second before crossing the border

We do the extra 15km of dirt. It starts to rain. It isn’t heavy, but it slows us a bit.

We cross the border. We keep going through Orbost. We get low on fuel, and the servo at Nowa Nowa is closed. We divert down to Lakes Entrance for gas.

We pass a police car stopped near a 4WD. A kilometre on we pass another one, another 4WD, and SES uniforms. Police and State Emergency Services guys are walking the sides of the road, on the outside of the armco.

There are three more police cars, a kilometre or two spaced, all with SES accompaniment, all walking the side of the road. Lost kid? We don’t know.

A woman at the servo spends a couple of minutes walking around The Door’s Rocket, staring at it. A truck driver at the next bowser is helpful. “Watch out the other side of Bairnsdale,” he advises. “Crawling with coppers and radar.” We thank him and leave.

The Door pops a celebratory wheelie.

I have anticipated the radar/police problem.

The Victorian government issues speeding fines for 104km/h in a 100 zone. Their policies are not driven by road safety experts, they are driven by accountants. And the accountants will insist that resources are situated where the maximum revenue may be gained: main roads.

My planned route for tomorrow doesn’t include many main roads.