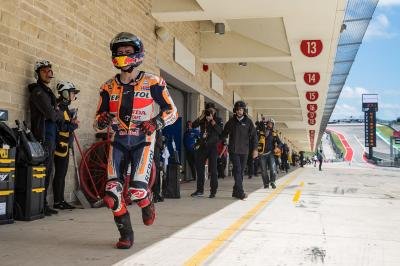 “This rubbish you make me ride removes the chain from itself like the Marty removes his underpants when his girlfriend sends him her Instagrams.”

How long will you spend kicking the walls in the toilet?

I have a championship to win, and while I can do that without you, if you break the toilet, then where will Marty hide his shame after I beat him?

Have some consideration. You are not skinning the seals in your family igloo anymore, Poo-eegah. This is professional motorsport at the highest level – not the fishing for penguins with sharp sticks.

Look how calm I am. You should always use me as an example and tame the wild Eskimo in your soul. You must be careful or the United Donalds will put you on the other side of the wall with all those gardeners and car-washers they don’t like very much.

Then where will you be? That’s right. On the other side of the wall in Utah with the Magic Hat People and all of their wives!

You saw how the little Marty makes the small happiness for himself in Qualifying. It was clear. Because I am the Repsol Grande, I lead by example always. I show him the fast lines around this stupid motocross track, and then I think: “OK, is the time to let his teeth in front so he can taste what it is to ride like the champion I am.”

So I let him past. And then when I come into the main straight, this rubbish you make me ride removes the chain from itself like the Marty removes his underpants when his girlfriend sends him her Instagrams.

I stop because all the chain-power is gone. And then I run like 20 champions to the pits. Madre de Dios, a bull could not run as beautifully as I did! But the Repsol Honda you have not built properly then chooses to lie down on the track and surrender, like the snail-eater, Zarco.

Have you identified which of the little Bushido failures made the sprocket and the chain to do this? I think you will not find him in that toilet you are kicking, Poo-eegah.

I also think your hiring practices must be looked into. People who eat the fat of seals and shit in ice-holes do not make the best MotoGP mechanics, I think.

I have not forgotten the rubber you forgot to put on my handlebars the last time I was planning on winning. I have the memory of an elephant.

But I forgive you. You have still to learn many things about the Way of the Mamba. Sparta lives in me, Poo-eegah! I am generous and kind, but also like an eagle made of spears. The butter is bright on my wings and my hammer is the voice of the mountain.

And on Sunday that voice will sing like the whales that swim on the ice of your frozen homeland. “SSSSSS-chah!” it will say and it will echo among the tamales and enchiladas in the stands.

And the Eagles of Freedom in the carpark will know a Champion rides among them. Now stop kicking at the toilet. My neck needs to be massaged and your hands are always very strong.

You are my obedient servant as always,