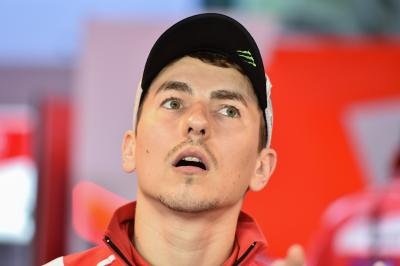 Why did the stupid Englandian cowards build this dam where before was the stupid Silverstone?

Last time I raced here there was a track. Yes, it was bumpy and rough, like the colon of an ox, and it was surrounded by screaming half-naked soccer hooligans and gross women who looked like retired prostitutes, but it was still a racetrack.

Now it is a dam. Or a rice-paddy. The hooligans and prostitutes must have all emptied their bladders to make this much terrible water, for sure. The smell was terrible. Like curry.

I watched the Old Surrender Puta Capirossi drive around the rice field many times – much faster than he ever rode the motorcycle, of course, and then he came back and went inside a big truck.

This truck, like London, must have been full of Englandian weaklings and quitters! I do not know what awful lies the Old Surrender Puta told them, but they surrendered and cancelled the race.

I thought I was in France for a second.

You better sort this out very quickly, Gigi. My skin is starting to blister and I am feeling very unwell. Once again, this is the fault of the unemployed criminal Redding. He came to me on Friday after FP2 and said it was going to rain on Sunday.

He then said to me he wanted to pass on an old English motorcycle-racer trick shown to him by Barry Sheene. He said it would keep me warm and dry on Sunday and so maybe next year I would give him a job rolling tyres into the Yellow Puta’s legs as he walks to the pits.

“Get all the silicone you can,” he whispered to me. “And rub it all over your body before you put on your leathers. The silicone, and I recommend FulaSealPro 300, is all natural. It is made from the waterproof sea-glands of the Scottish sea-otter and it is perfect for when it is cold and wet. I have used it my whole career and I am very fast in the wet. Crutchlow uses it to seal the holes in his body because it makes him streamlined.”

So I did that, immediately after I told him the only place he was ever fast was when he ran from the supermarket after stealing bread and cigarettes.

My leathers won’t come off now, Gigi. The Mamba cannot shed his racing skin! And I cannot make the pee-pee and the kaka! Well, I have made them, but they have remained inside. Somehow.

But I was warm and dry all of Sunday. But then the burning started. And the itching. And the making of the kaka. I went to the Clinica Mobile, but they were busy cutting Rabbit’s stupid leg off. And now it is Monday and I am still wearing my race leathers and no kaka has appeared.

I am in the toilet at Heathrow and I am waiting for you to fix this. The second stall from the wall. Do not waste any time! I must very soon make more kaka.