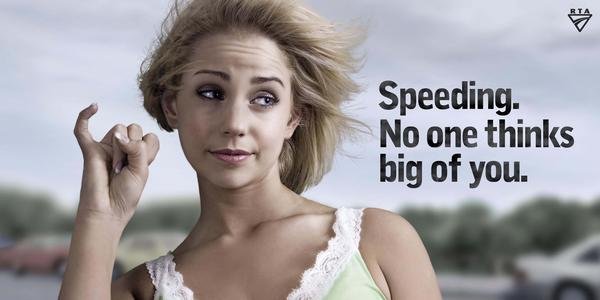 As I hinted in my last column, the money-sucking bureaucracy of the NSW RTA was about to metastasise into an Orwellian Ministry of Truth. It would then set about altering the way society viewed the gory evil of speeding.

And so it has come to pass.

But in my wildest dreams I did not imagine its propaganda campaign would be so quintessentially pathetic.

In their opening salvo to alter the way society regards people who speed, the chinless cretins who squat on their publicly-funded ergonomic toadstools, have targeted male P-platers – possibly the only group of road-users more loathed by the RTA than motorcyclists.

Matho touched eloquently upon the RTA’s right-think ad campaign in his last editorial. What he didn’t mention was the fact that apart from it being utterly ineffective, it is the most hideously sexist pap ever to ooze from the orifice of the ad agency that spawned it.

That it was signed-off on by some lard-bodied RTA she-toad is even more tragic.

As Matho explained, the agitprop being beamed into the Premier State’s loungerooms, consists of a few ugly fat chicks making disparaging hand-signs about the inadequate genital size of speeding male P-platers. The message is that young males speed (and do burnouts, and have drag races) because they are in crisis over the minuscule size of their salamis. And young girls will not have sex with them because they are genitally inadequate and will therefore be unable to satisfy them.

Based on this cause-and-effect, one can only assume that everyone else who speeds is also burdened in a similar fashion. Even women, but I would guess the genital issues that cause women to speed are more concerned with their nether regions being too big, rather than too small. Since I am only guessing, save your letters of outrage for the RTA, who forced this entire discussion in the first place.

Leaving aside the self-evident fact that it is actually testicle size that counts when you choose to see what lives at the business end of the speedo, what insults me the most is the blatantly gross sexism of the advertisement.

Would a commercial that featured young men making hand-signs that called into question the size of a young woman’s reproductive organs (to mentally shame her into not speeding) ever be screened on our TVs? 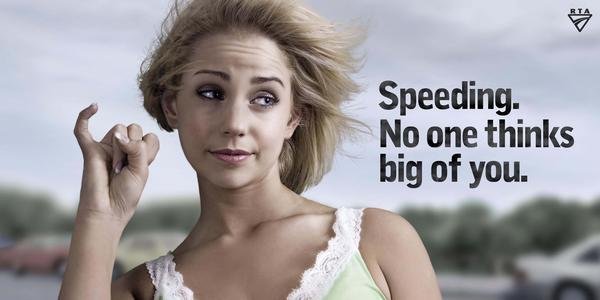 And just how cavernous is your vagina, sweetie?

How extensive, savage and final would be the public pillorying of the insensitive man-pig who created and/or signed off on such an advertising masterwork?

Since when did such inane sexist bigotry become a publicly acceptable avenue for the RTA’s message?

On what evidence does the RTA rely to support its small pee-pee crusade? Has the RTA polled any teenage girls to see if they agree with the ad’s contention? Did it speak to any Lilliputian-sized boys to see how they dealt with their apparent genital handicap, and if they had found redemption at 270km/h in a 40 zone?

Did anyone bother to consult the women’s magazines (that have spent the last two decades convincing everyone that size does not ever matter) on the issue?

While you consider all of that, perhaps you should also ponder how effective this expensive exercise in insults is going to be.

Any child knows that effectiveness is inextricably linked to credibility. If you are not credible, then no matter what you wish to convey, you will fail utterly.

We already know that the RTA’s endless “Speed Kills” mantra is nonsense, as is its histrionic bleating about non-existent “carnage” on our roads. Both have been empirically proven to be fat-bottomed lies.

So does this new ad lend some much-needed credibility to this monolithically sexist bureaucracy?

To answer that, we must simply think back to what it was like when we were almost 20.

Do blokes speed and do burnouts because they are trying to make up for their dwarfed genitals?

No. It is childishly idiotic to even suggest that.

Do young girls immediately link a big-smoke burnout to the stunted equipment of the man behind the wheel? Do they, at such a tender age, even have sufficient terms of reference to make such comparisons?

Of course they don’t. If they did, then why would any bloke worth the weight of his cags be even remotely concerned with the opinions of sluts?

The whole thing is an insolent farce – a shameful, amateurish, and ignorant misuse of the money we pay the government for the privilege to ride on its shitty roads, register our vehicles, be photographed without consent, and amuse the Highway Patrol.

It would appear it is much easier for the RTA’s liars and fools to commission such expensive exercises in futility, than it is for them to a) implement rigorous driver and rider training from the very first year of high school; and b) quit bullshitting people about “carnage” on the roads.

Employing vacuous girls to roll their eyes in disappointment at the size of a bloke’s tackle is best left to dinky programs like The Benny Hill Show and rum-filled bucks nights.