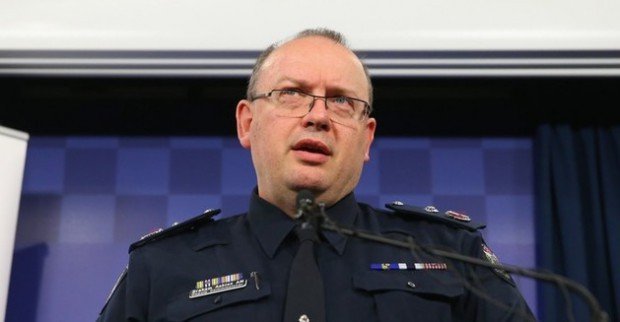 Did anyone else giggle like a little girl when they heard Victoria’s chief commissioner of police, Graham ‘Where’s My Concentration?’ Ashton was nailed for 108km/h in a 100 zone?

I did. In fact, I sounded more like the entire audience at a Frankie Boyle gig. If I was incontinent, my dad-nappies would have hit the ground with a wet splash, such was my joy.

My schadenfruede (that marvellous German word for the feeling you get when you experience joy at someone else’s misfortune) spikes every time I hear of such a thing. Every time a police officer gets caught betraying the public trust by dealing drugs, raping women, molesting female colleagues, taking bribes, or breaking the road laws, I rejoice.

I delight at the predictable squirming that immediately follows such crimes against the public trust, as the police PR machine goes into full ‘Shit, Bro!’ mode.

In Gazza Ashton’s case, as in every case (and I remind you that his predecessor, Kenny ‘Secret Speed’ Lay was also caught hauling arse through Tooborac in Victoria at a mass-murdering speed of 80km/h in a 70 zone and kept it a secret while his PR twonks scrambled to find the right response) the scripting was predictable.

Ashton fronted the media, ominously resplendent in his new-look black-on-black-on-black ‘No, it’s not a Schutzstaffel uniform’, and his dewlap quivering, possibly in indignation.

“I am deeply committed to road safety,” Gazza reminded us first of all in case we’d forgotten. “And am embarrassed and disappointed to find I have gone above the speed limit.”

Now, I do not question Gazza’s commitment, embarrassment or disappointment. I do find it a little disingenuous that he kinda just ‘found’ he had gone above the limit, though. Am I to assume it was the same kind of surprise ‘find’ when you wake up to ‘find’ a dead hooker lying all blue and cold beside you in a motel room? How did that get there, you ask? And how did I manage to stray over the speed limit?

Sure, it’s only eight little kays, but Gazza…maaaaate…every kay over is a killer, right? A dozen children and some little girl’s beloved pet billy goat might have gone to Jesus as a result of your heinous velocity.

Happily, Gazza has an explanation for this.

“This was a result of a lapse in concentration,” he declared, and thankfully added that this was not an excuse. “This does not excuse my actions.”

And despite your threatening black uniform, it doesn’t excuse you, as you have so generously admitted.

But here’s my issue, Gazza. It’s only a little one, but I’m sure you’ll agree it’s important.

As a motorcyclist, I certainly have a far greater understanding and appreciation of concentration that you do. After all, I’m not chugging along in the latest-model publicly-funded car with my chubby cheeks being bathed in climate-control. I’m sitting astride and in charge of a divinely designed two-wheeled missile, which will kill me faster than…well, let’s just say it would kill me faster than a police officer might shoot a man wielding a knife (which I’m sure you’d know is pretty damn quick) if my concentration would lapse. Certainly, my lapse would have no effect on the public’s trust, since the public, largely thanks to your superb PR machine, mostly views me as a drug-enriched scofflaw with possible terrorist overtones. I don’t much care about that.

I care about dying. So I concentrate all the time. ALL the time, Gazza. Because there’s a lot at stake for me.

I’d like to think you get it, because you did state that: “Maintaining focus on the roads at all times is critical; a moment’s distraction on the road can lead to tragedy. My members see the results of these tragedies every day.”

Gazza, would these be the same members (it’s a club now, is it?), of whom 600 were caught breaking the road rules in 2011? What’s that? Yeah, you’re right. Those Queensland cops cannot be counted as ‘your’ members.

Your members would be the 179 VicPol officers that were caught driving while hammered on piss between July 2000 and May 2009. Only the Road Gods know how many of your ‘members’  have been done for betraying the public’s rather misplaced trust since then.

Anyway, how’d your members go seeing the results of those tragedies? Or do they only count as tragedies when your concentration lapses and people die as a result? Did it count as a tragedy when your members were using the public as human shields to catch bad guys on the Tullamarine Freeway? Or are we still waiting for one of your wonderful ‘internal inquiries’ to pronounce you all tragedy-free and clean as driven snow in that case?

Anyway, Gazza, it’s been beaut chatting with you. And I can’t tell you how happy I am that you’ve chucked $190 into the can for Road Trauma support on top of your fine.