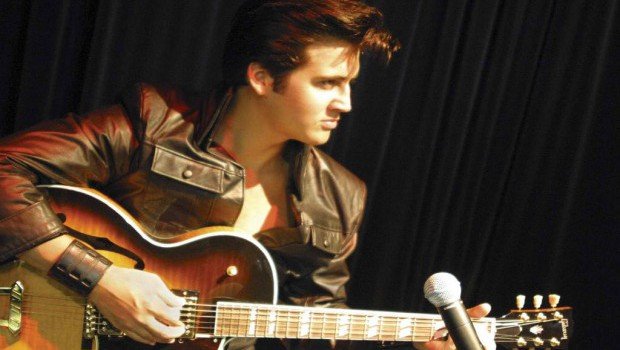 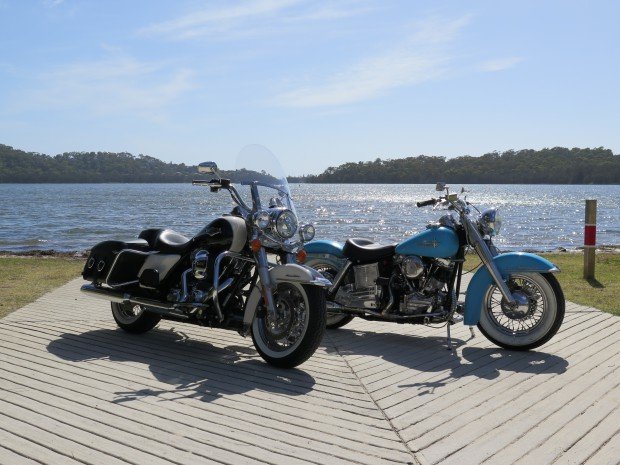 It was New Year’s Eve.

The roads were swarming with Highway Patrol eagerly loading revenue into the coffers of the state.

“That Panhead of yours,” I stated.

“Probably need to take it out and smear some oil on the Queen’s highways.”

“I might let you essay the King in return.”

And thus it was agreed. 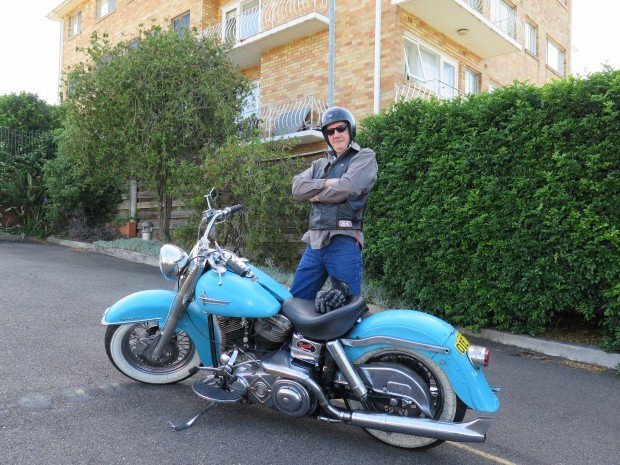 What the Hell is there not to love here? 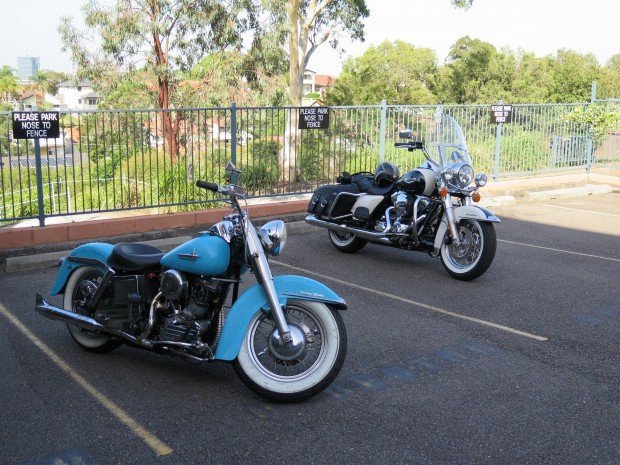 First cousins, without a doubt. 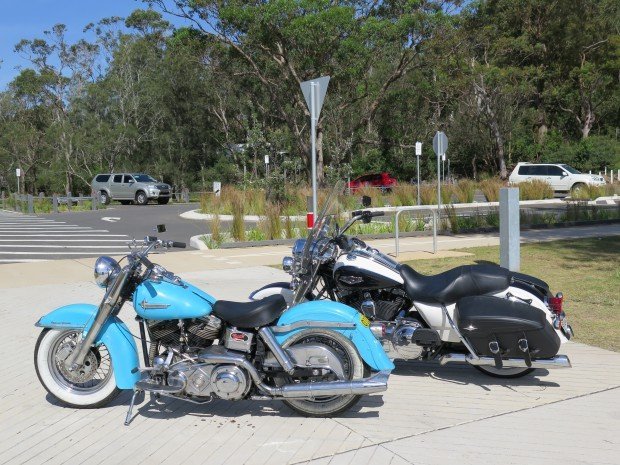 I met Kel at a civilised hour and we proceeded, as civilised men do, at a civilised pace to Manly beach, where I reasoned a goodly proportion of the city’s babe population would be rubbing oil into its lady parts and getting its New Year’s Eve suntan on.

Seemed like a good place for two leathery Harley riders to be.

And so I bestrode Kel’s 65 Panhead – the third Panhead I have ever ridden – explained to him how the King likes to roll and that he has two more gears to play with than he has on the Panhead, and off we went.

The work that Kel has done to the engine is rock-solid. It pulls like a train, and vibrates almost not at all. I was astonished at how smooth it delivered its power and how easily it banged on when I twisted the throttle. 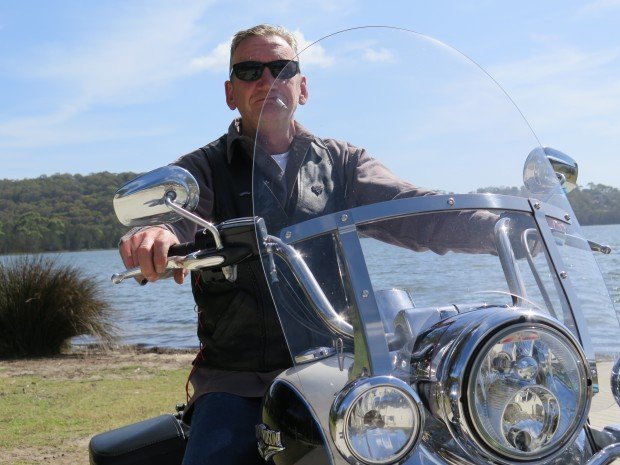 He loves it. The screen, not so much. 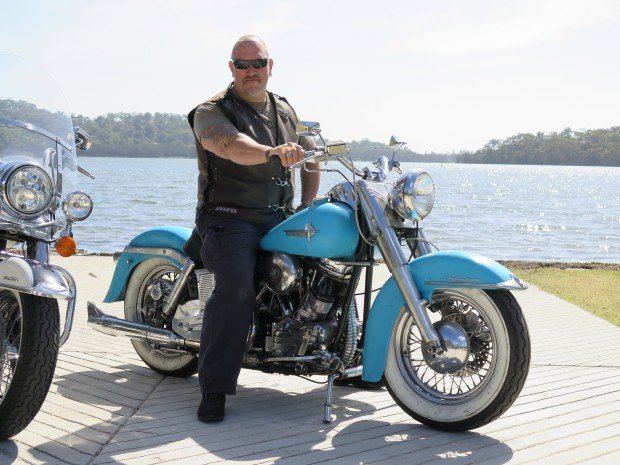 Yes, it does come with a centrestand.

For his part, Kel was smiling like a murderer on the King.

The similarities between the two bikes are astonishing.

There is no question that the DNA of the Pan is extant in the DNA of the King. Certainly, the King’s a much younger and more robust DNA, and there is certainly the question of handling and brakes, which the King has lots of and the Pan has very little of – but there is no doubt they are part of the same family.

The Pan feels smaller than the King and its handling is certainly intriguing. Its lack of meaningful stopping power is even more intriguing. Wooden is a good word to describe what’s going on there. In fact, it’s the only word that doesn’t have swearing in it.

“You should have ridden it before I put the disc on the front,” Kel explained. “It was diabolical with the drum.” 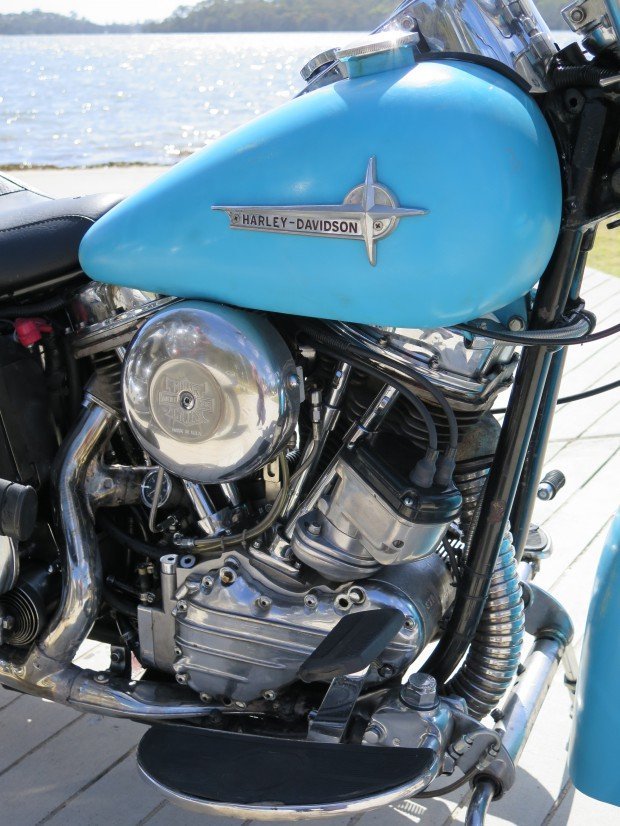 One of the most handsome engines ever built. 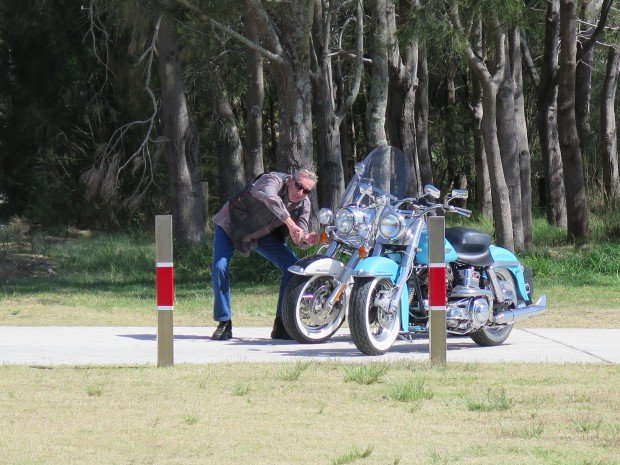 Kel was of the view that the King’s front-end would bolt straight onto his Pan. 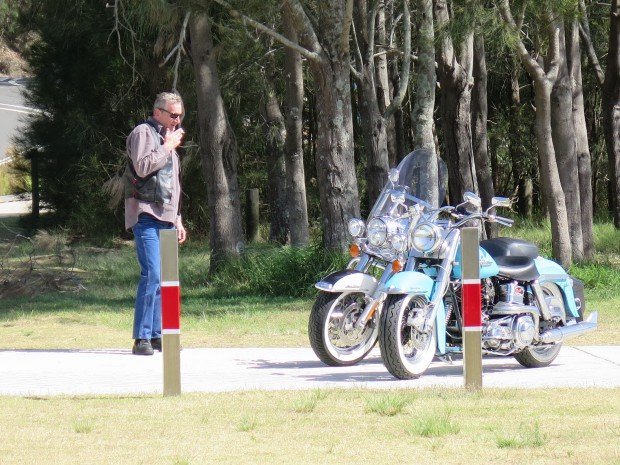 I told him to stand back or I would throw a rock at him.

We proceeded with great dignity, circumstance and some pomp to beach, and we only paused once for some minor repairs to the Panhead’s gear-shift lever.

Being an old warhorse, Kel chose a nice shady spot in a deserted schoolyard to make these repairs. Nothing sucks more that doing repairs in the summer sun. As a former Shovelhead owner, I can attest to that.

The gear-lever suitably affixed, we docked at a very crowded café opposite the beach, and with an excellent view of the public shower, and ordered coffee. 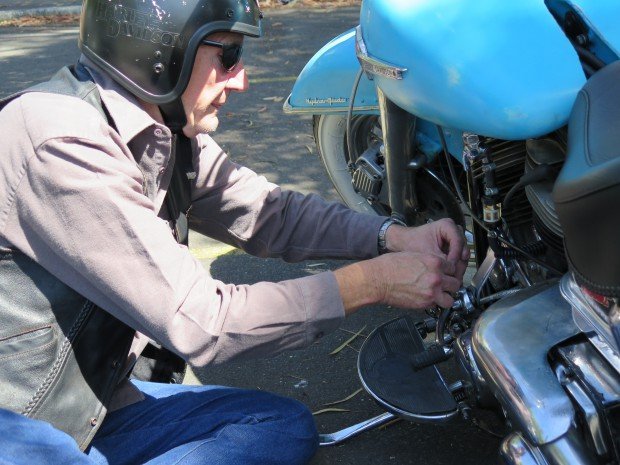 I failed to detect a smile from this angle… 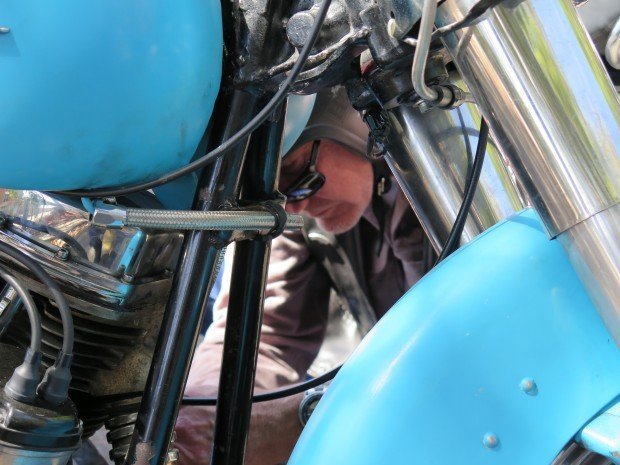 …so I tried this angle. Still no luck.

A young fellow brought the coffee and wanted to know whose Panhead it was.

Kel declared ownership and was told that the young bloke had seen him many times in the past months cruising the beach on it.

“I haven’t been here in years,” Kel told him.

“You sure about that?” I asked, concerned that maybe his memory had begun to fail.

“So what do you reckon about the King?”

“I love it,” he smiled. A little wistfully, I thought.

“It’s just a joy to ride. I could ride it to Melbourne right now,” he continued. “The suspension is great, the brakes are awesome and it’s got some grunt.”

“It’s all relative, you know.”

“I expect two hundred words by sundown tonight,” I said. “There are no free rides here.” 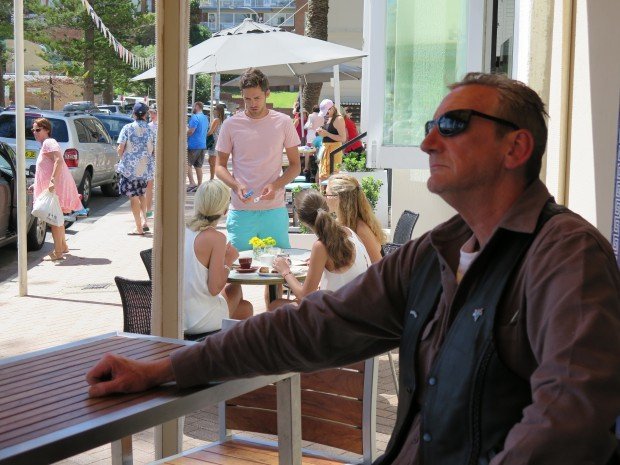 Kel looks out to sea to see if there were any whales breaching and cavorting.

As good as his word, Kel sent me the following:

“My name’s Kel and I haven’t had a new bike since my 1982 FLHS. My personal compliance plate reads DOM 1961 but my odometer is stuck on 30, if you know what I mean. So when Boris asked if I was up for a ride on a perfect summer day, I jumped. He had the new Road King and I was keen to see it up close. See, I currently ride a 1965 Panhead that I rebuilt from a neglected mule bought in the US. I love the fucking thing with all its faults and it’s probably the pick of the twenty-odd Harleys I’ve had over the years.

We met in the morning and to see the RK was a surprise. Super-neat finish and excellent paint. I even saw some variances in the fine pin-striping so there must have been a human hand involved, which I thought was great in this age of decals.

I waited for him to throw me the key but there ain’t one, apparently. There is some fob thing with an alarm thing, so all I needed to do was hit the starter button. With lots of buttons on offer I stabbed at a few until it fired up.

Now keep in mind the only reference point I have for comparing the Road King is my 50-year-old Pan or one of the other showcase of shitboxes I have owned, built and sworn at for over 30 years.

First impression? It’s tall and the centre of gravity feels high for a Harley. I’m over six foot in the old money and had no issues with the height; it was just different for me.

It sounded only just OK; very over-muffled, but I guess that’s by law rather than by design and there is a massive aftermarket industry to help fix this. I’d be straight into that market if it was my bike.

We trundled off and I thought: Geezus this is OK. Torque was instantly there from idle and it just came and came and came. Really super-smooth and linear.

There is this big screen fitted that I couldn’t get used to. I’ve never had a bike with a screen and found it annoying cos my eyeline was right on the rim. If it was my bike the screen would be on eBay that afternoon.

We navigated out of the traffic and I got to run through the gearbox. There was six fucken gears! Who needs six gears? Anyway the tranny is a joy with all of the same traits as my old four-speed ratchet top, like a clunk into first and a vague resistance to finding neutral except at rolling speed. Some things don’t change in 50 years and it made me feel at home.

On the road the suspension and seat comfort is perfect; definitely the nicest stock Harley offering. Apparently it’s an adjustable air-ride rear, but it was spot on for me and I found myself looking for bumps to marvel at how good it was. It’s something that you could ride to Melbourne on just for a hamburger. It’s just that comfy!

I was reluctant to give it the berries as it’s not my bike, but when Borrie got away from me in traffic I was forced to. Fuck, what a motor! Again the poor thing is running super-lean and could do with a tweak to the air/fuel ratio. That would also help with the heat that was being pumped out onto my leg. It was definitely running too lean. When we pulled up for a photo and swapped back, I was a little disappointed to give it over.

What a joy that Road King is.

Would I have one? Fuck yeah.

Would I buy one? Nope.

Not that it’s a bad thing. It’s not at all. It’s just not what I like.

I like smelling burning fuel and oil and having vibrations and rattles and shudders. That’s what makes me smile! 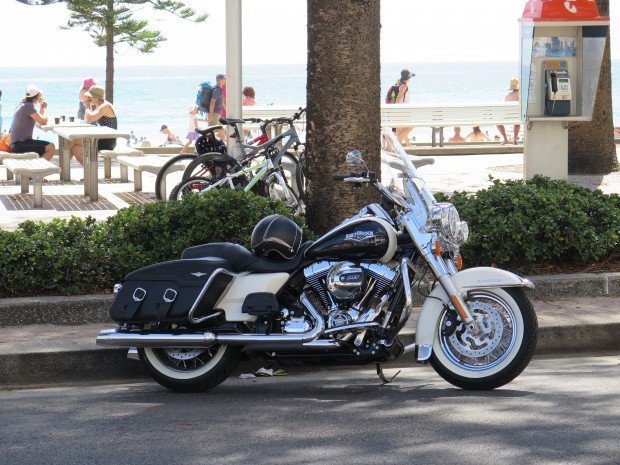 The King loves the beach.

If I was unkind, I would say there wasn’t a lot of smiling when Kel was cable-tying his gear-lever back on, but I’m not unkind.

And he will come around.