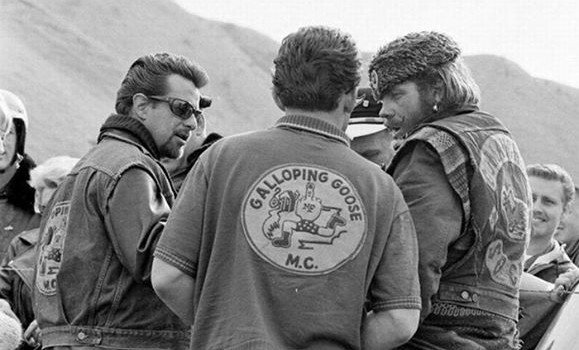 THE HISTORY OF HARLEY-DAVIDSON PART THREE 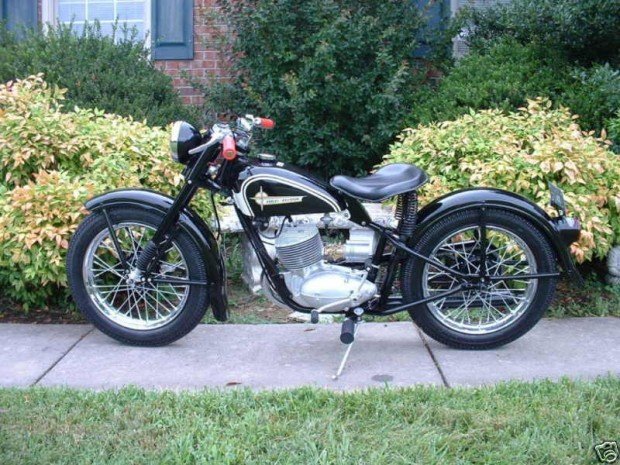 BORN TO BE WILD PART III

AS THE 60s began looming psychedelically in the consciousness of the United States, and the world got correspondingly more complicated, Harley-Davidson was entering a period in its history that would change forever the way it was perceived.

Servicemen who had returned from WWII had been looking for ways to spice up their slice of apple-pie America. They found them behind the handlebars of the Harley-Davidson.

Harleys began to be “chopped” by their owners, ie. Modified, lightened and customised. Social clubs began to form with names like the Boozefighters, the Galloping Gooses, and the 13 Rebels. These clubs would hold rallies, races and social events, and while still a long ideological distance from being outlaw motorcycle clubs as we understand them today, they did raise a lot of hell in a very short time. This hell-raising basically consisted of getting drunk and riding around the countryside in large groups on very loud hotted-up motorcycles. 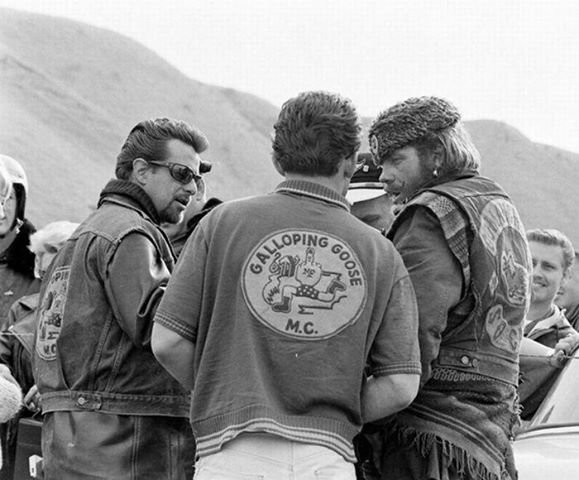 In the happy (but ever-vigilant) world of post-war America, when the only external enemy was the ravening Soviet horde a mere 100kms away across the water from Alaska, groups of drunken youths on motorcycles were fast news on slow weekends.

And that was pretty much the case with the infamous “riot” that occurred in Hollister, California, in 1947 – the echoes of which are still heard to this day.

What actually happened in Hollister that July Fourth weekend and what the media reported, were two entirely different things. But the media can never be accused of letting the truth get in the way of a good yarn.

Basically, about 4000 motorcyclists turned up to this small Californian town to participate in organised events sanctioned by the American Motorcycle Association (AMA). This was several times more motorcyclists than the town or the AMA expected. As a consequence, riders were sleeping on footpaths and parks when they weren’t drinking beer, riding their unmuffled motorcycles up and down the main street and generally having a great time. Less than 50 people were arrested during the entire weekend (mainly for public drunkeness), and there were a few injuries, but the USA was still a way from the race riots and massive civil unrest that was to mark the 60s and 70s, and the events at Hollister did make an impression on the zeitgeist. 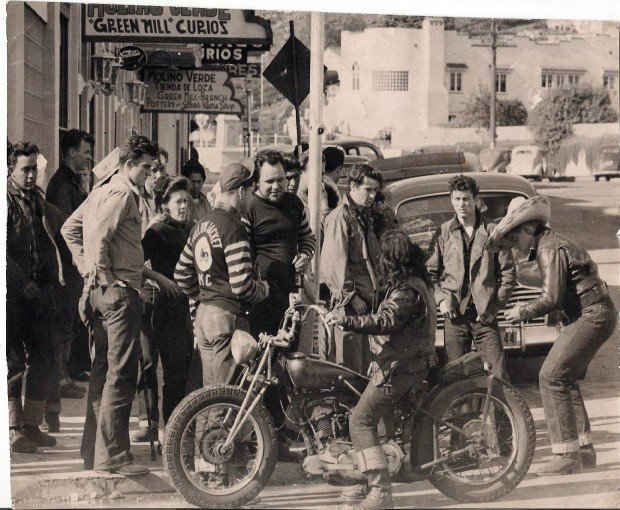 The media saw this as a great story and beat it up to sound like the apocalypse was now imminent for the USA. Life magazine even staged a photo it felt “captured” the event perfectly– that of a fat drunk sitting on a bike surrounded by empty beer bottles. It didn’t matter that the drunk was a local man who didn’t own the bike he was sitting on, or that the bottles were placed there by the photographer. What mattered was that America had been alerted to the horror of the motorcycle gang and the AMA could issue its famous statement that said: “The trouble was caused by the one per cent deviant that tarnishes the public image of both motorcycles and motorcyclists.”

Thus was born the term “one percenter”, which was immediately adopted by some motorcycle clubs as a badge of honour.

Hollywood immortalised the event a decade later in The Wild One, but outlaw bike clubs always identified with the Chino character played by Lee Marvin, rather than the somewhat foppish Johnny that Brando portrayed. Interestingly, Johnny actually rode a Triumph in the film, while the far more charismatic Chino was astride a Harley. 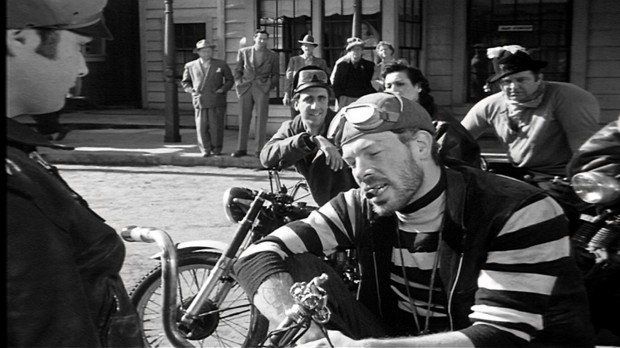 Lee Marvin as Chino telling Marlon Brando’s Johnny to have a long hard look at himself. 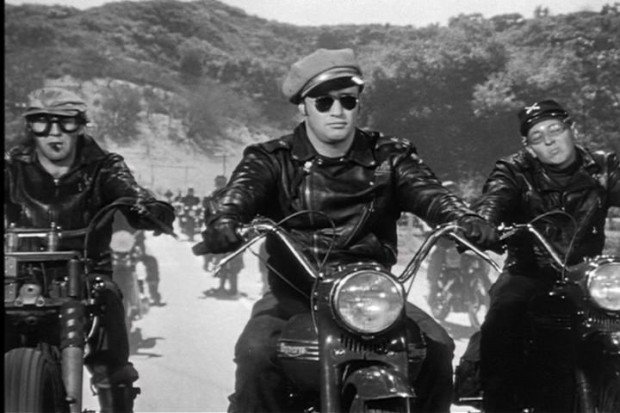 They got their motors runnin’…probably.

But as American motorcyclists divided themselves into one percenters and the rest, Harley-Davidson was starting to feel the pressure from overseas manufacturers – especially the English, who were having a bit of a golden age with their motorcycles.

In 1952, Harley-Davidson applied to the US Tariff Commission for a 40 per cent tax on imported bikes and some people were starting to question such restrictive trade practices from what had become an Americon icon. It was premature, because the English bike industry was on its last legs and the real threat would ultimately come from Japan. But the wisdom of hindsight is not given to us ahead of time. 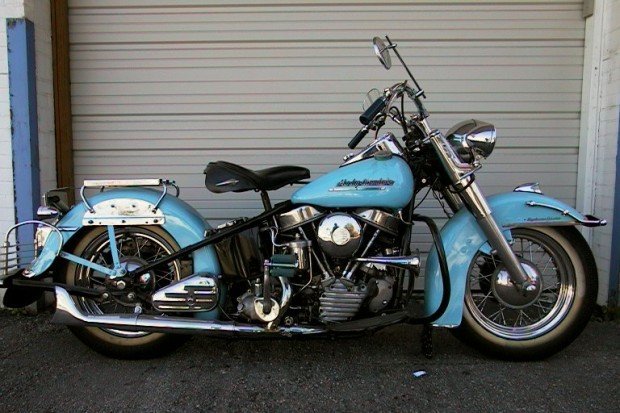 Meanwhile, Hollywood was proceeding full steam ahead with outlaw biker films, and was making lots of these trashy classics in the 50s, 60s and 70s, thus cementing the image of the outlaw biker in the consciousness of America, and creating an eternal bogeyman for the establishment. Inadvertently, it was also creating what I believe to be the greatest marketing tool for Harley-Davidson. But one that would not be fully realised and utilised until the baby boomers started coming of age in the 90s.

Then along came 1969, and two utterly unforgettable events in the long history of Harley-Davidson.

The first was that American Machine and Foundry (AMF) bought Harley-Davidson. You may recognise the acronym if you’ve ever been ten-pin bowling. And if you ever rode an AMF-era Harley, you would curse the day you did so. 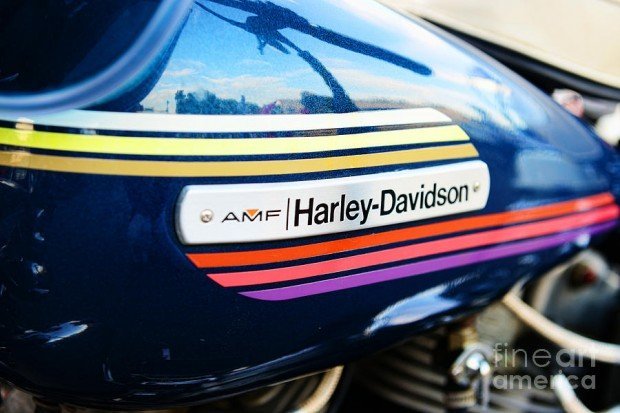 The mark of the AMF Beast

AMF slashed the company’s workforce in an attempt to streamline and rationalise production. Like so many greasy corporate shenanigans, it all went to hell. The workers went out on a series of rolling strikes and the build-quality of the motorcycles fell into the sewer. They were soon being called Hardly-Driveables by riders buying the much faster and better-made Japanese bikes that were just then starting to become available. Sales declined and bankruptcy began to loom large and realistic in the company’s future.

The second big thing that happened, while not directly linked to the factory, was that the Hells Angels stabbed and killed a man at a rock concert at the Altamont – and today’s hard-core outlaw motorcycle sub-culture was born.

It was an event that would, ironically and ultimately, save the struggling firm. But Harley-Davidson would never admit it. 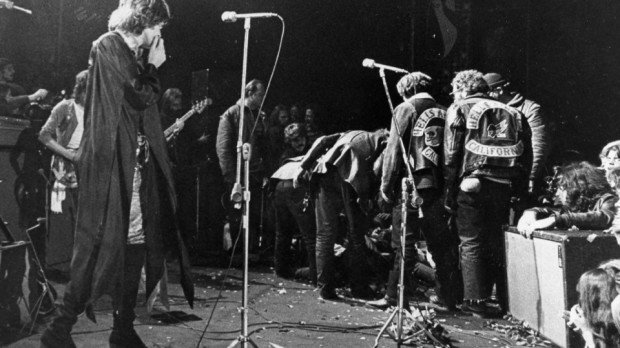 Mick stops singing for a bit 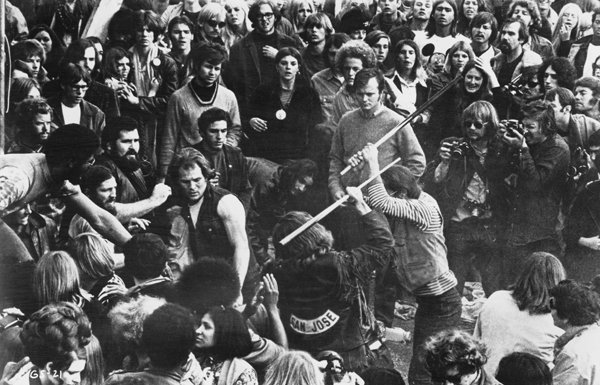 Before mosh pits, there was this.