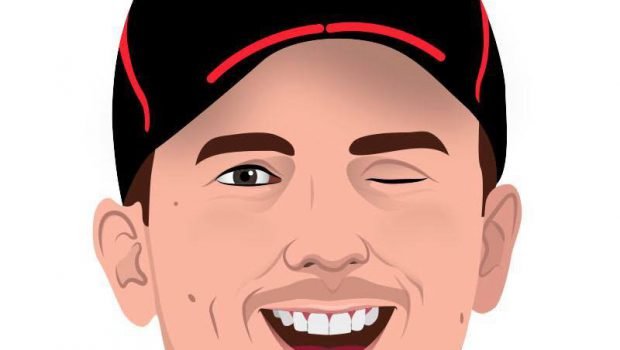 What the fuck? I’m being serious now.

You’re now an App? With Emojis?

Emojis you sent to Matthias and me because you think: “It’s a sexy fun way for everybody to get behind the Spartan and support him while he stabs all the putas with his spear?”

Matthias now wants to put you on a fire-proof conveyor belt and drink schnapps while he watches you roll into an industrial furnace. He also wants to take pictures of this and send it to his accountants.

I want you to focus on doing something in Argentina that doesn’t involve you finishing outside the top ten. And no, coating your spear in butter and poking it into Rossi’s tyre allotment is not one of those things.

George, please. I know you like your Emojis and you’re very excited about your new App where people who sign up get four free cartoon pictures of you making faces, but I am at a loss to understand how this will:

a) Recoup the money Germans invested in you, and b) “Get me more fans than the Yellow Puta could ever dream of.”

It was embarrassing enough when you changed your racing number to double devil horns from the halo-and-horns rubbish you had when you were Yamaha’s problem.

I had to spend hours convincing Matthias, who is one of those creepy Lutherans, you were not in league with Satan. It wasn’t until he saw you ride in Qatar that he actually believed me and called off the priests he was sending to have you exorcised.

“Gigi,” he said to me, “you were right. He cannot have made a deal with the devil because he is riding like a schweinhund.”

And now this Emoji shit.

No, the Argentines are not still at war with England. You don’t have to bring extra spears and spit on Crutchlow. Just get to Free Practice on time.